2014: A Retrospective from the Wilds of South Central Kansas, Part 2

From grasshopper-eating turtles to omnipresent praying mantises, there were so many interesting sightings in the yard and gardens this year that I hardly know where to begin.  I've shared some of those sightings through posts throughout the year, but tonight it feels like those posts just skimmed the surface of what I observed.  I've got a ve-e-e-ery long post drafted that is relatively complete...but it's way too long already and I'm just now looking at September's photos.

So I'm rebooting and sharing just a select few highlights. 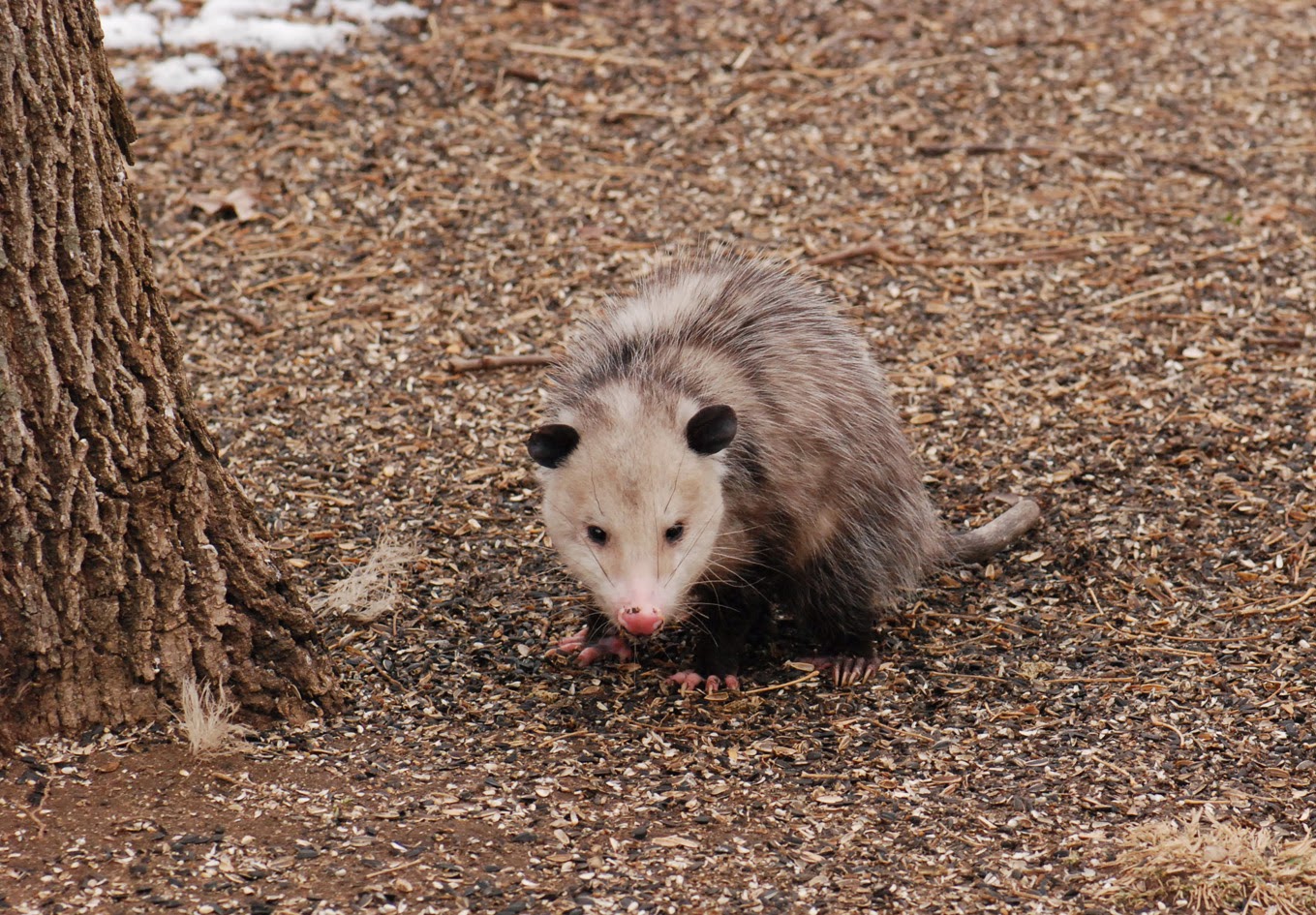 We'll start our trip through 2014 in the yard/garden with a photo of the possum that showed up, snuffling through the birdseed leftovers, one day in early March.  Its tail was stubby and bloody, so something had been after it fairly recently;  I doubt it was feeling too good, which probably explains why it was willing to come in to birdfeeders in the middle of the day.

Incidentally, I have come to really appreciate possums.  First, they rarely carry rabies.  I believe it has to do with their low normal body temperature.  Secondly, they act as supreme "tick sweepers" - they keep their fur almost entirely free of parasites such as ticks, presumably by eating any they find when they groom themselves.  Thus possums will help reduce the population of ticks in an area, rather than increase it. Amphibians were relatively common this year, which was so good to see. In the gardens around the house, I observed at least 5 or 6 different Woodhouse Toads (Anaxyrus woodhousii) over the course of the summer, ranging in size from a little over an inch to several inches long. 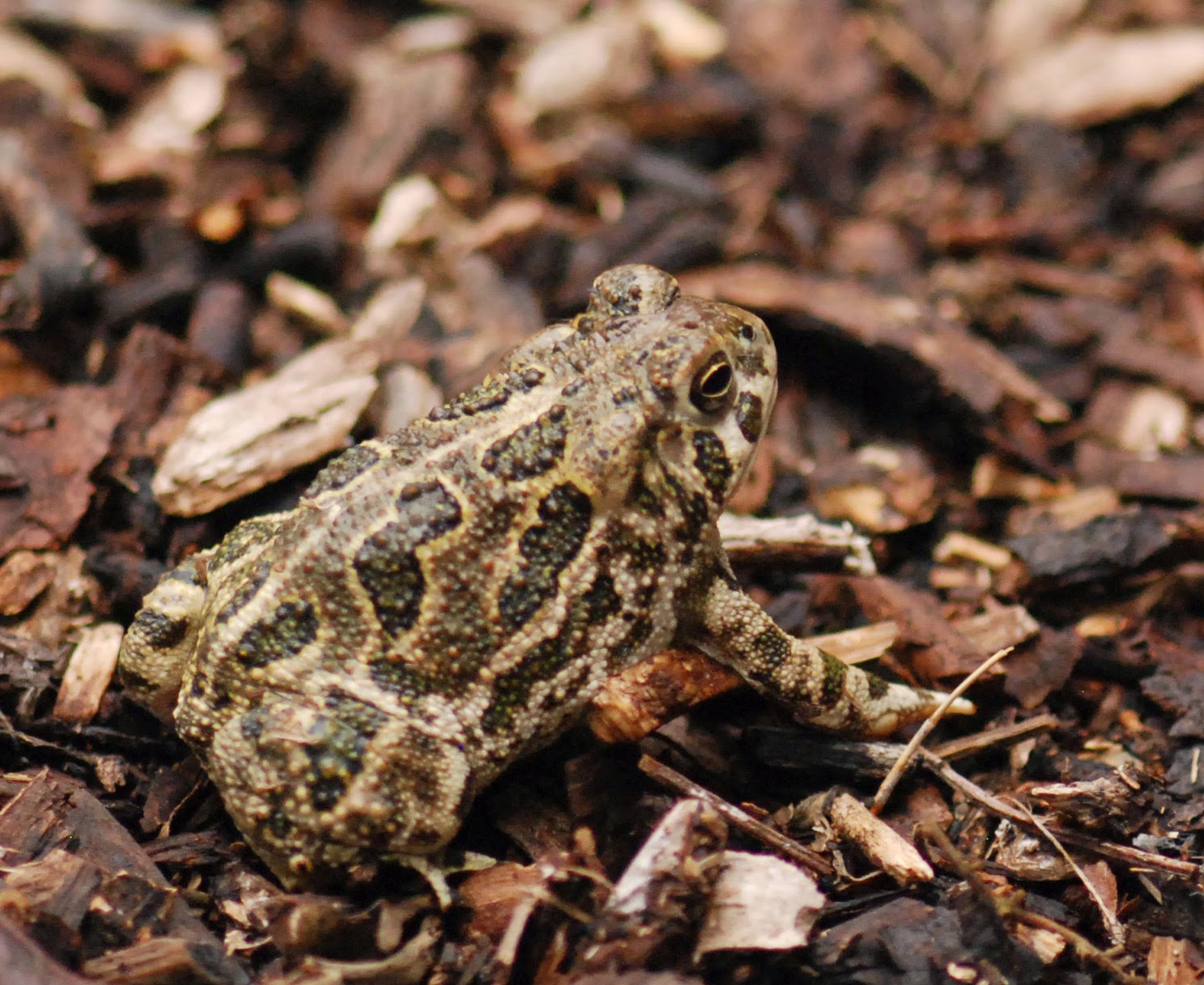 I also noted at least 3 Great Plains Toads (Anaxyrus cognatus) throughout the summer.  On June 15th, I saw 3 different toads in one day:  2 Great Plains (one big and one little) and 1 Woodhouse! 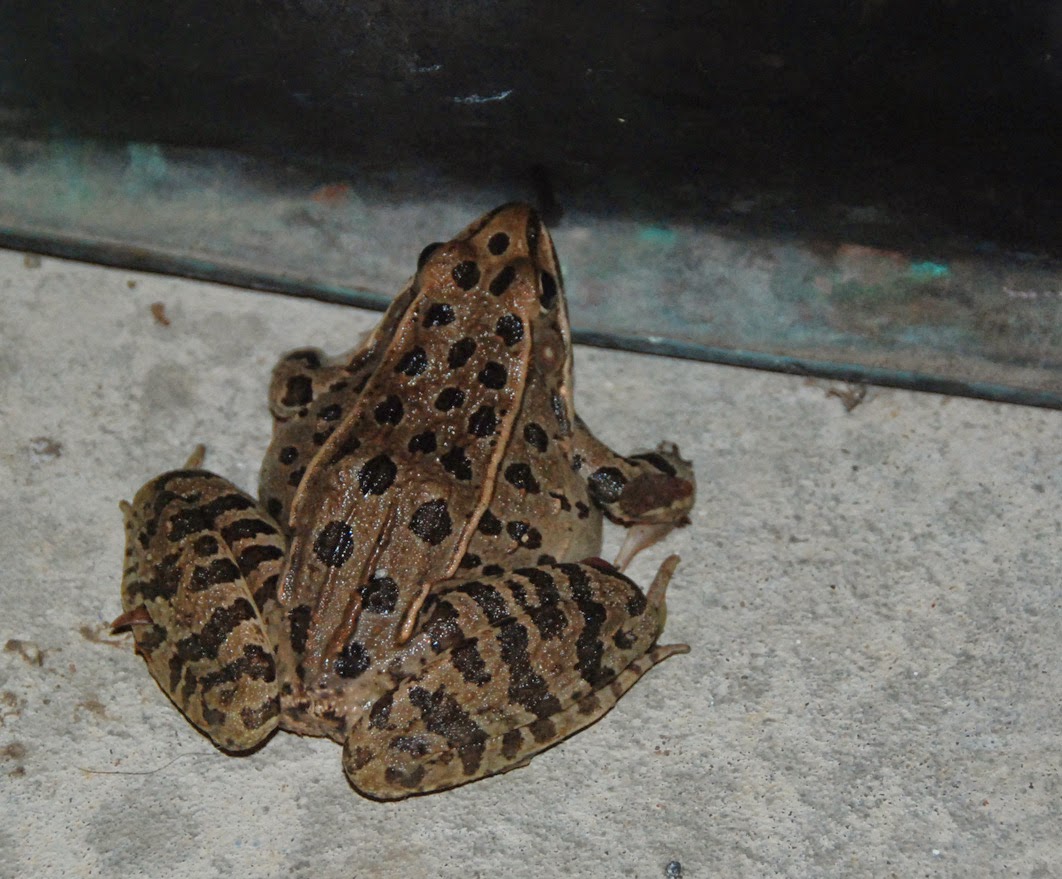 On April 2nd, I went out one night to find this Plains Leopard Frog (Lithobates blairi) on the front porch, evidently enjoying an early feast on the insects that were being drawn to the porch light.  I've seen toads and tree frogs do that, but I've never seen a leopard frog come to lights before. 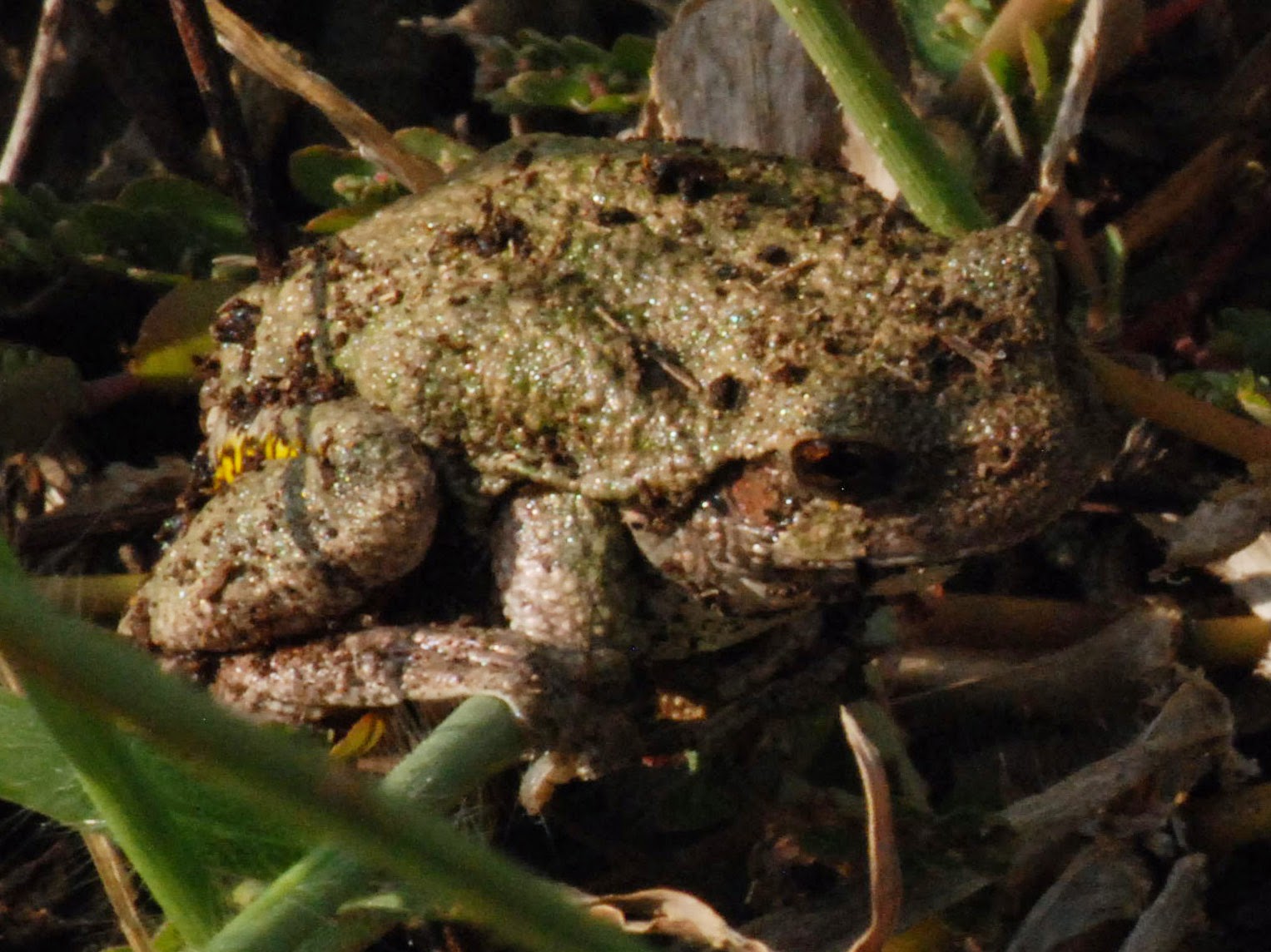 The gardening year wrapped up with a new-to-the-yard amphibian species, a gray treefrog (Hyla sp.), who showed up in the vegetable garden on October 19th.  It amazes me how animals that need water as much as amphibians do can survive the droughts we've had over the last several years. 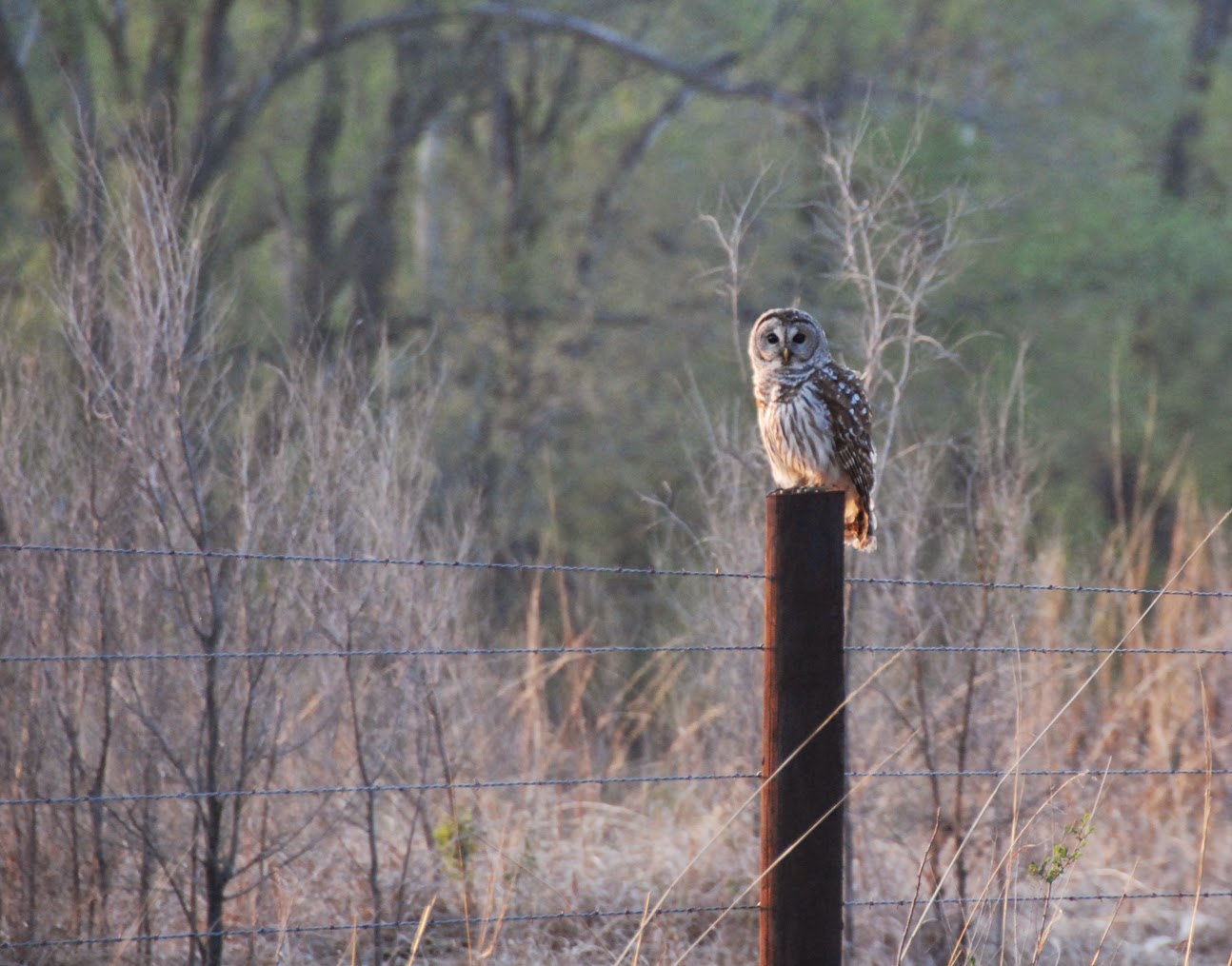 My next highlight wasn't technically in our yard, although we do hear barred owls calling frequently in the evenings and at night.  Coming home from the grocery store on April 17th, we noted this individual on a fence post by the road, about a mile south of our house.  I have no idea what the size of a pair of barred owls' home range is, but perhaps it's possible that this is one of the birds we hear calling?  Or maybe this bird is one of "our" owls' offspring?  At any rate, it's a cool photo to have captured and I wanted to share it with you.  (Actually, I think Greg took this photo, since the bird was on his side of the car.  I want to give credit where credit is due.)

Compared to amphibians, reptiles weren't seen much during 2014.  I was able to get photos of a couple different garter snakes and 3 ornate box turtles. 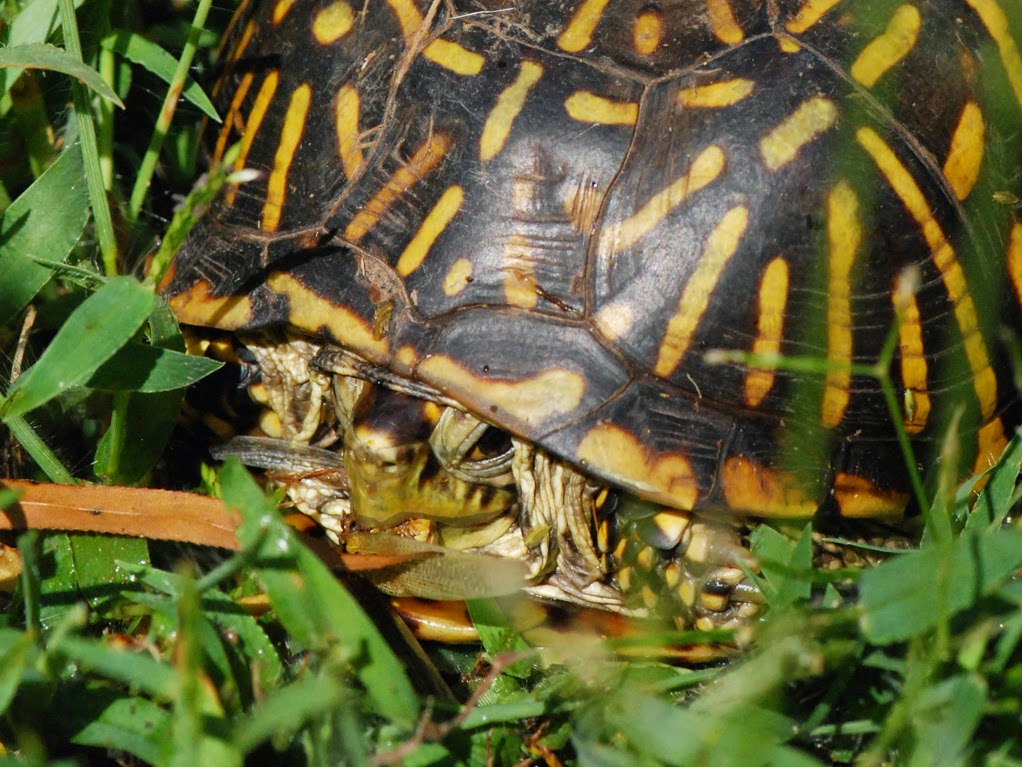 The best turtle photo of 2014, I guess, is this one of the turtle munching down on a grasshopper.  She was quite nervous about the boys and me being so close, but she sure wasn't going to give up her tasty meal!  Good protein!


Of course, many, many of my photos are of insects, but I'm going to save those for some other time.

Great photos of the creatures at your place. Possums are cute in that ugly cute sort of way. Have you ever found one with babies riding along? I really like the owl photo. Great capture.

No, I've not seen one with the babies riding along...although we did have one "playing possum" one night when the dogs got too interested!

I was really excited about the owl photos - one of those "serendipitous" moments. It's rare to get that close to one without a lot of work and a real blind.

I've enjoyed your 2014 walkthrough. Wasn't aware of the possum/tick connection. I need more possums...ticks were quite evident this year. Love the owl photo. I hear em, but haven't seen even one outside of the bird rehabilitation facility. Great stuff, Cynthia!

Thanks, Loret! I love your daily posts, too. So many cool and interesting plants and animals in our world, aren't there?!