Years ago - sometimes it seems like it was in another life - I worked with and for the Kansas Audubon Council.  One of our projects at the time was trying to get the Z-Bar Ranch, as it was known then, into federal protection as a national park.  Through the work of many dedicated people and organizations, with the Kansas office of The Nature Conservancy serving as a key link, that dream came to life - and the American people now have under their protection the Tallgrass Prairie National Preserve.


The Tallgrass Prairie National Preserve has the Z-Bar Ranch, originally known as the Spring Hill Ranch, as its core.  Located near Strong City, Kansas, the Spring Hill Ranch was settled by a wealthy cattleman and his family in the late 1870's and early 1880's.  Stephen Jones built a literal mansion out of native Flint Hills limestone, situated on the side of a hill above the main road into Strong City.


A little to the north of his ranch headquarters, he donated land for a school house...and a limestone school house was built.


All of these beautiful limestone buildings still stand today.  For decades, they intrigued travelers along Highway 177, which runs directly in front of the ranch house, but very few were privileged to see the insides of any of the buildings, even though they were rarely owner occupied after about 1900.

Now travelers are privileged enough to be able to explore both the buildings AND the surrounding prairie through a collaboration between  the National Park Service and The Nature Conservancy.  There are self guided tours of the buildings, wonderful nature trails of various lengths, bus tours of the "back country" during the summer and fall, and events held throughout the year.  There is a newly built interpretive center, too, which is due to get its permanent exhibits sometime this spring.  For now, they show a 10 minute film about the preserve and the tallgrass prairie, have bathrooms, a gift shop, and a very helpful park ranger to answer questions or give you guidance.

While our son Sean was home from Boston for Christmas, we decided to go up and check it out.  Neither Sean nor Greg had ever been there, although we'd all driven by it many times traveling between Wichita and points north and east. Plus, while December temperatures that are regularly in the 60's make me nervous about global warming, I have to admit that a bright blue day with a high of 64 degrees F. was extremely pleasant for exploring the prairie!

Here Sean and I are posing for the camera on the old road bed, with the mansion behind us on the hill.


The old road bed in front of Spring Hill Ranch is extremely obvious from some angles and almost invisible from others.  Here you can see the path of the old road to Strong City, running next to the new highway, with an old American elm (Ulmus americana) arching over it.


That old elm just fascinated me!  Such a huge, majestic tree!  And out on the prairie - thriving! 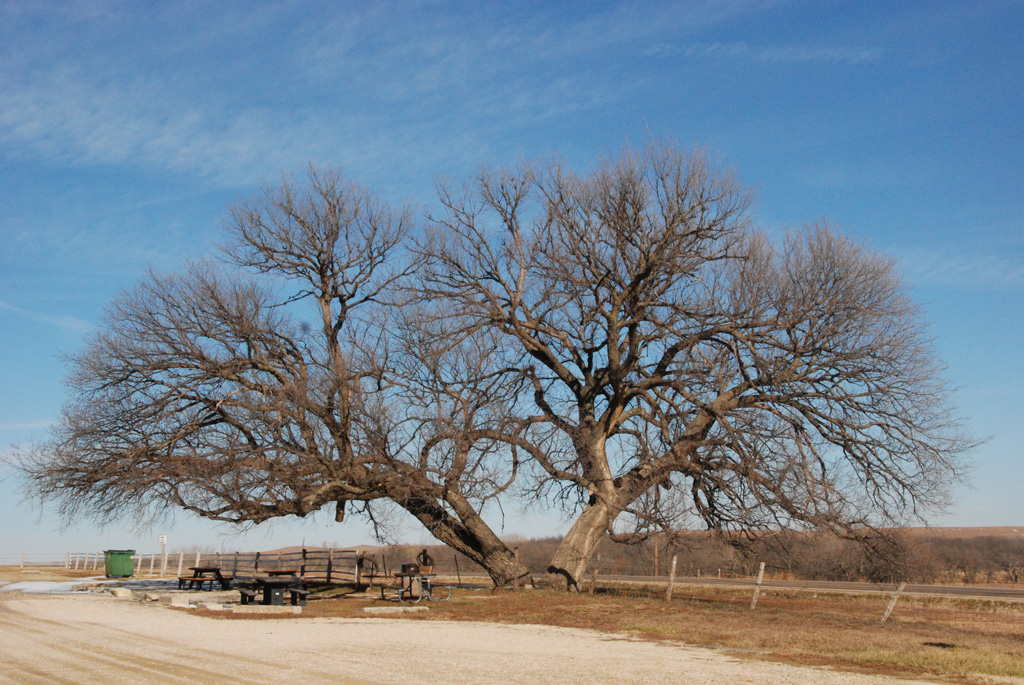 
The Southwind Trail starts by this vegetable garden, goes through the cedar grove, and meanders the pasture to the north of the ranch buildings, with a spur going up to the limestone schoolhouse.  This is a pleasant, relatively level trail that is just right for an easy stroll.  As we left the cedar grove, this pair of cedars, with the small series of steps between them, felt like a gateway into the open prairie.


In the shrubs to the right of the "gateway", several bright orange clusters of berries caught my attention - American bittersweet (Celastrus scandens)!  Although this attractive vine is native here in Kansas, I haven't seen it growing in the wild for a long time.  I suspect that most of it, at least along the roadways, has been killed by overcollecting for Thanksgiving and Christmas decorations.


Just beyond the "gateway," if you look to the north, you can see the old limestone schoolhouse on the next hilltop....


Sean and Greg decided to go up to the schoolhouse, while I stayed on the main loop of the trail and photographed a few shrubs and wildflower seed heads.


I could ramble on for a long, long time about all the interesting and beautiful things we saw...but I won't.  Instead I will recommend one last treat that we discovered in the downtown Strong City.  Having not had any official lunch and having explored the buildings, the visitor's center, the Southwind Trail, the schoolhouse, and the Bottomland Nature Trail, we were rather dry and hungry when we left the Preserve.  Sean had seen a restaurant in Strong City whose name appealed to him, so we pulled in to check it out....


Ad Astra was wonderful!  We were expecting to just get a coke and a snack, then go home to eat, but an enjoyable atmosphere of brick and stone walls with a gorgeous tin ceiling, as well as a gourmet sandwich and entree menu, enticed us to have dinner here.


A delicious bison burger with a side of black bean chili called to Sean,...


while I fell for a Reuben sandwich with homemade potato chips and a homemade pickle, and Greg had a fantastic looking (and tasting) ham and cheese creation with a broccoli salad side.  Boulevard and Ad Astra ales were on tap, so we were able to quench our thirst too!  Last of all we decided to splurge on dessert:  a decadent peanut butter and chocolate cheesecake slice for Greg, a rich peppermint and chocolate cheese cake slice for Sean, and a delicious creme brulee for me.  All worth the stop, just on their own!

All in all, a most excellent adventure!  If you've never checked out the Tallgrass Prairie Nature Preserve and you live somewhere within a couple hours, I'd say it would make both a nice trip for yourself and a great place to share with visitors.  If you're driving through Kansas sometime, I'd highly recommend checking it out for a unique and memorable experience.  It's one of the only places left where you can truly experience the American tallgrass prairie in its vastness and openness.  Just don't forget to refresh yourself at Ad Astra (or in nearby downtown Cottonwood Falls) when you're done!