A Different Kind of Yard Art 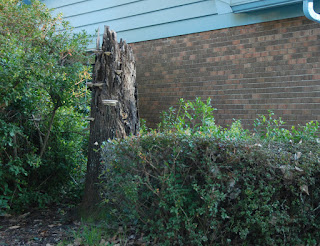 This made my day last week, when I happened to notice it during an afternoon walk!  I have heard of leaving standing dead trees for their wildlife value, and I personally have left standing dead trees well away from our house when we had large yards or acreage and I could safely do so, but I have never before seen the remains of a dead tree left standing in a suburban yard, to decompose gracefully in place.  I truly love it and find it mesmerizing.

I have no idea what species this tree was, whether it was cut down or came down in a storm, or how long it's been quietly decomposing in place.  However, I think it's perfect...and perfectly beautiful, too. Now I know what I want to do with the 3 live oaks in our yard that will probably fade away over the next few years!
Posted by Gaia Gardener: at 4:00 PM 2 comments:

However, even a blank slate yard is never totally blank.  A suburban lot surrounding a house that's been lived in for almost 50 years is definitely not blank.  So, I've been watching the yard to see what's already living here, and I thought I'd share some of the native plant species I've found, the native "building blocks" that already exist in the yard for me to utilize.

Trees seem like the place to start.  The first thing I noticed coming up to our house last April was the big southern magnolia (Magnolia grandiflora) by the driveway, dominating the front yard. 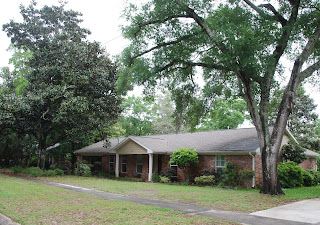 Unfortunately, it's not a good location for this species, since southern magnolias grow way too large for this space.  So, sometime in the past, big branches were pruned out of the tree to allow the electrical lines to go through the canopy.  There is also a southern magnolia in the back yard, although it is younger and smaller than the one in the front.

Next on the current yard list are the oaks, live oak (Quercus virginiana) and sand live oak (Q. geminata).  In the photo above, the big tree to the right of the house is our largest live oak.  Although there are many sand live oaks in the neighborhood, I think we only have one, a relatively small one, in our (back) yard.  On the other hand, we have 5 live oaks, 3 of which are quite unhealthy.  Unfortunately, none of our live oaks are terribly picturesque, having been limbed up to be "proper" trees, judging from their form. 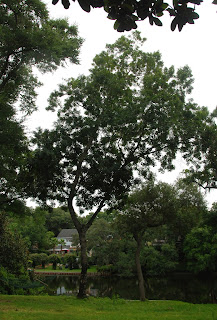 This photo, of one of the pignut hickories in the back yard, was taken in late June last summer.  I kept waiting for these trees to turn colors this fall, but it was a long wait.  The trees stayed green until December, when they turned a beautiful, bright yellow.  Leaf drop was rapid, once the leaves started to fall, and took place right around Christmas.  Not a traditional yard display for the holiday season!  If my memory serves, these trees are late to leaf out and won't get foliage back until April.

While there is a lot of Spanish moss (Tillandsia usneoides) in the neighborhood, we have very little in our yard - perhaps a result of how open the canopy is.  There IS some, though, and I'm hoping that we get more to grow over the years.

For quite a while, I've been eyeing this little prostrate vine and thinking that I recognized it - and I did. 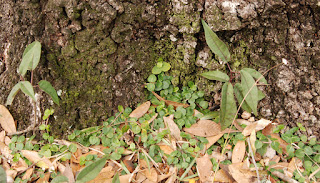 It's partridge berry (Mitchella repens), a gorgeous little evergreen groundcover with a wide natural range.  I had started to make the mistake of covering much of this plant up with mulch, but realized what I'd done when I went out to take the photo this morning. 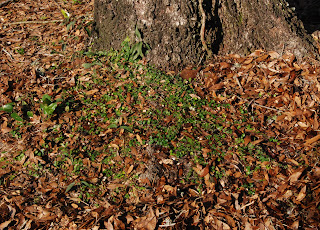 Here's the full scope of this plant, unearthed from below the mulch.  I'm hoping that this little guy will bloom (white) and maybe even set fruit (a bright red berry) later this year.

If you take a second look at the photo above, you'll notice a bare vine going up the tree trunk.  This vine is crossvine (Bignonia capreolata), a classic native landscaping vine in the south.  Here is a new stem, probably from the same root stock, climbing up a different side of the trunk. 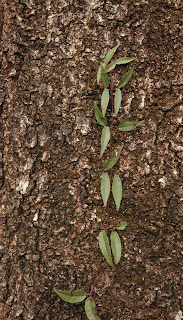 I'm excited to see this plant naturally in the yard, although this specimen doesn't look particularly luxuriant. Hopefully some better yard management will make it healthier.

Coming up in the middle of an old sand box, along the city storm drain easement, is a dwarf palmetto (Sabal minor). 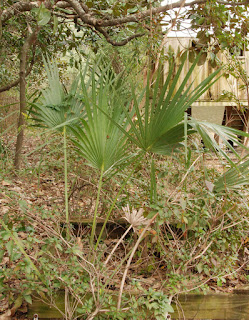 These are palm-y shrubs, with the trunk remaining underground.  I'm not very familiar with this species, although now that I know how to identify it, I'm noticing them all around.  This is one of many plant species I want (and need) to learn more about.

Last summer I noticed a rather handsome perennial plant growing at the base of one of the pignut hickories. 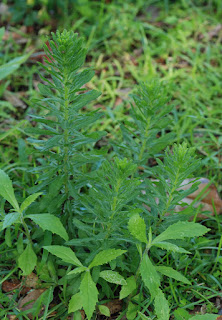 I cordoned it off, so that it wouldn't get mowed, and watched it to see what it was.  Finally, in October, it bloomed a bright yellow. By the time it bloomed, though, the base of the plant had browned out badly.  I've figured out that this is golden aster, probably narrowleaf golden aster (Chrysopsis linearifolia), and the lower leaf brownout is actually listed in the plant descriptions. 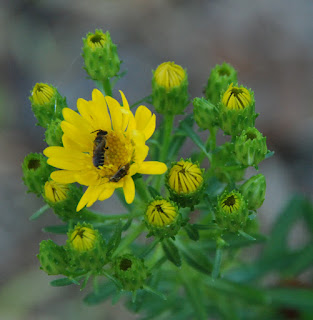 Most interesting is that, even with just a few buds open, there were actually little native bees using it in mid October.  So, now the challenge is how to disguise those lower leaves...and increase the plant population from my current n of 1, without jeopardizing that current, single specimen. 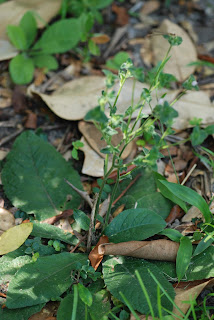 For now, the last plant I'm going to mention is Woolly Elephant's Foot (Elephantopus tomentosus), aka Devil's Grandmother, which I noticed and photographed last June.  I have no idea why it has earned either the name of "elephant's foot" or "devil's grandmother". This is not a showy plant at all, but it is both native and perennial.  I will almost assuredly keep it, but I may not try to expand its presence in the yard. 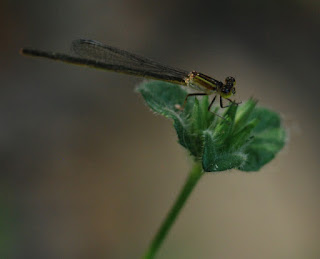 I did like the fact that this little damselfly was using the bloom head to perch upon!

Time for a New Beginning


As I sit down to write a new blog post - the first in many months - the joyful screams of laughter coming from our grandson, Connor, are ringing through the room.  Grandpa is rough-housing with him, and 7 month old Connor loves it!

Life has changed a lot since last I wrote.  We're fairly well settled in Ft. Walton Beach, Florida, now.  Every week day we care for Connor, generally for 8 or 9 hours a day, sometimes for as long as 11 hours.  Greg hasn't gone back to work; he will probably start working part time soon, but for now he is deeply enjoying this time with Connor.  Thanks to long hours during training, Greg missed much of our children's early years.  Even for me, who stayed home and raised our kids, there are new observations and opportunities.  I'm getting a chance to notice things I was too busy or too stressed to notice when our kids were young:  the development of smaller muscle control, the personal preferences that show up almost from the first day, and the changing patterns of babble, to name a few.

Between settling in and caring for Connor, what I haven't done in the last several months is garden much or blog at all.  With the holidays behind us and spring looming soon, the gardening juices are finally beginning to flow again through my veins.

I have no idea where this new garden will take me yet.  I definitely plan on using mostly natives, but I'm floundering a bit for a central theme, like "restoring prairie" was for our land and garden in Kansas.

This is a completely different situation, not too surprisingly.  We're in an older, suburban subdivision, developed in the late 1960's, about 4 miles inland from the Gulf of Mexico.  Located on a small, man-made, freshwater lake, our lot is about 0.4 acres in an area of sand hills.  In the neighborhood, there is an overstory of sand live oaks, live oaks, and southern magnolias.  I suspect there were longleaf pines originally, too, but most of them have been removed. 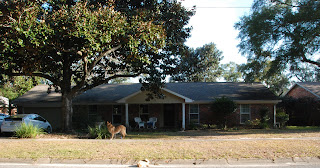 While the neighborhood has a great deal of landscape personality, our lot is fairly bland.  There is a large live oak (Quercus virginiana) and a large southern magnolia (Magnolia grandiflora) in the front yard, with some foundation shrubs and a few non-native plants under the magnolia.  The rest of the front yard could euphemistically be called "lawn." 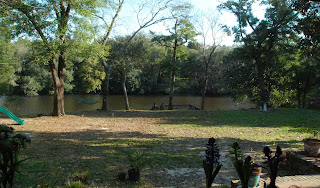 The back yard is fairly similar, with a younger southern magnolia, 3 pignut hickories (Carya glabra), a sand live oak (Quercus geminata), a healthy live oak, and 4 unhealthy live oaks.  There are foundation shrubs along the back of the house, a tangle of azaleas and undergrowth along the west side (a city right-of-way over a drainage pipe), and a lot of open "lawn" dominated by dollar weed and assorted other nongrass species.  Next to the lake, two sea walls have been put in to terrace the hill, with an area of bare sand in between them that sits about 3' above the level of the lake.

The post I did last June, "A New Chapter Begins "Down South"," while we were here on "baby watch" shows our yard in its "virgin" state.  I've made a few changes - and, of course, it's winter now - but the basics are unchanged.  Since writing that post, I have realized that we actually only have one sand live oak - the others are live oaks, a similar but larger species.  Also, the hickories in our backyard are pignut hickories (Carya glabra), not bitternut hickories, as I originally thought.

And there my mind just sort of stops.  How much lawn should I leave?  How big should the perennial and shrub beds be, and how should they be shaped?  We want a vegetable garden (probably raised beds) - where should it be located?  How should we lay out the path leading to the dock and lower deck?  I feel like I can't place trees or shrubs until I have the answers to these and similar questions.

Winter is the best time of year to plant woody plant material here, so it's (past) time to begin.  Have suggestions?  I'd love to hear them!  Have other design ideas?  The more, the merrier!  It's a new beginning, for us...and for the garden.  There's new territory to chart and discover, so we'd best get on our way....
Posted by Gaia Gardener: at 7:24 PM 2 comments: