Have you ever read Stanley Kunitz's The Wild Braid?  If you haven't, you should.  It's a marvelous meditation on the intersection between gardening and poetry, one of those books I like to pull out and dip into every so often.  Each time I reread it, I find something new that stands out.

Several months ago, looking (I think) for references to winter solstice, I pulled The Wild Braid back off my shelf and revisited it.  While I didn't find anything that spoke to me about winter solstice, I did find a passage about an old tree in his Provincetown garden that resonated, so I marked the passage to blog about.  As I've thought back to that passage over the intervening time, I've remembered his old tree as an aging eyesore that became an "icon tree" in his garden.

Speaking of aging eyesores, smack dab in the center of our view of the lake, there's a dying laurel oak down by our dock. 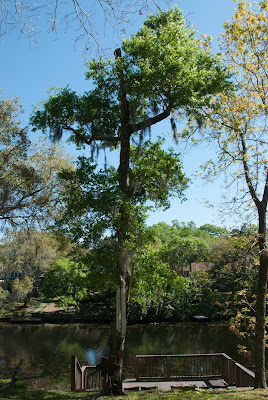 As I went about daily life this winter and spring, occasionally I'd think about the blog post waiting to be written.  Somehow our gaunt and decrepit laurel oak merged in my mind with that dying cherry, tended by Kunitz in his long ago Provincetown garden.  I came to think of this laurel oak as our garden's "icon tree".

Well, 6 months later I'm finally getting around to writing that blog post.  I pulled The Wild Braid out of the stack of books by the recliner to refresh my memory by rereading the passage before beginning.  Scanning the passages I'd marked, I could find no reference to an "icon tree".

Puzzled, I went back and looked harder.  I'd marked a section about a tree that Kunitz called the lamentation tree (p. 58-61).  Could that be the tree I was remembering as the "icon tree"?  As I reread the section closely, I decided that it was.  Funny how our minds play tricks on us!

"When we first moved in, there was a wild cherry tree, rather nondescript, growing there in a bed of ivy by the cellar door in front of the house.  It was the only tree in the garden areas, and, like most wild cherry trees, it was infested with gypsy moths and all sorts of destructive creatures.   ...[T]he tree showed no signs of recovering....  ...[T]he roots were being devoured by root borers...and meanwhile the wild ivy kept growing.  ...[S]oon the ivy covered the whole tree and began dangling from it.  In time the tree assumed the character of a woman locked in mourning."

Kunitz goes on to recall Martha Graham and a famous dance she performed called "Lamentation," where the postures of the body contracted and bent to visually personify grief.  "Gradually my ivy-burdened cherry tree seemed to take on the exact same posture.  It was so bent over with the weight of its grief that it no longer reached toward the sky but toward the earth, and so I named it "The Lamentation Tree."

After several years, the tree eventually succumbed to the weight of the ivy combined with the force of storm winds.  Kunitz wrote, "The lamentation tree was the most conspicuous eccentricity in the garden during those early years.  I've always regarded it as an allegory of the capacity for change in nature.  That tree changed its character and took on a life of its own, transforming from a wild diseased cherry tree into something else, no longer a tree really, but something emblematic, mythological.

"Part of the fascination of gardening is that it is, on the one hand, a practical exercise of the human body and, on the other, a direct participation in the ritual of birth and life and death."

The ritual of birth and life and death.....  Something emblematic, mythological....  An eccentricity.

While I'm not trying to be sacrilegious, there's something in the shape of my gaunt laurel oak that reminds me of a cross...or a scarecrow...or the burning man. 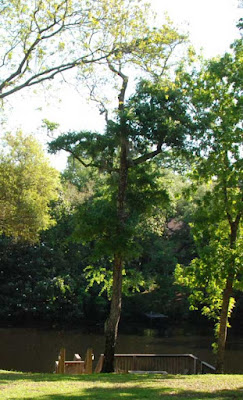 In April of 2015, before we even bought our house, this was the icon tree. 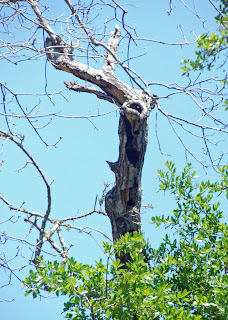 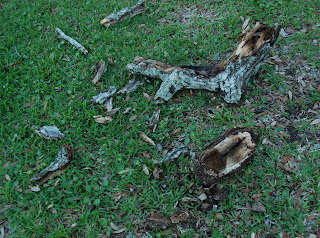 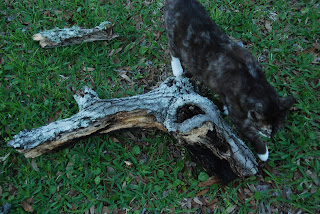 I kept the broken wood and have it nestled in a bed just a few feet  away from the base of the tree. 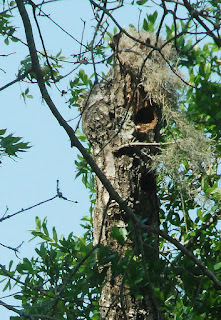 There are holes in the remaining snag at the top, one of which I think woodpeckers used to nest in last summer.

There's no ivy climbing up my icon tree, only a little bit of Spanish moss draping from the few remaining branches.  The shape is not bent, but starkly upright, courageously tall despite the continual erosion of its body parts.

We moved here to celebrate new life - the birth of our first grandchild - and have since also welcomed his brother into our lives.  Birth and new life, while this stark tree reminds us of death.

While our icon tree can't actually talk, we've (coincidentally) mounted a sonorous wind chime on it which only sounds in relatively strong breezes, accompanied by clanks of its clapper chain that call to mind Ebenezer Scrooge's chains.  Describing it makes it sound lugubrious, but listening to it is peaceful and reassuring.

Obviously, I've never known this tree as anything but half dead.  Truthfully I find it amazing that the tree has survived at all:  about 10 years ago, when the seawall and deck were put in along the back of our property, almost half of this poor plant's root system was stripped away when the hill it grew on was sheared off.  Then, adding insult to injury, bringing the water line from the house to the deck required trenching through another quarter of its roots down to at least 2'.  So our icon tree has lost at least 60-75% of its root system.  Any wonder that it's not looking too healthy these days?

Recently I noticed that there seem to be streaks on the lower bark that look discolored.  A fungal disease attacking?  How much longer can this survivor hang on?

Tragically, no matter how much care it receives one way or another, this tree will never again be totally healthy...which makes me think about humans whose support systems are removed from them.  How can they be expected to fulfill their potential - ever - if they've been dealt devastating blows or been denied significant support, removing their very roots and the (human psychological) nutrients those roots provide in their lives?

However compromised this tree is, though, it still hangs tenaciously on to its spot on the side of our hill - and it still provides shelter for other forms of life, like the woodpeckers who have used its dead wood to bring new life of their own into the world.  I've known quite a few humans like that, too, and my hat is off to them as they take circumstances that would cripple others and continue to make the world a better place through their presence and their lives.  I hope I, too, can take heart and learn life lessons from this gaunt old individual, enduring through adversity.

Posted by Gaia Gardener: at 9:20 PM No comments:

Color Clash: Where Do I Go From Here?

I'm not normally the sort of gardener who obsesses over clashing colors in my flower beds.  In fact, I'm rather an "anything goes if I like it" sort of person.  However, I find myself being challenged by color clashes in my front yard this spring.

Specifically, I have a couple plants that I absolutely adore:  downy phlox (Phlox pilosa), a beautiful soft purplish pink bloomer that goes from December through June, and Indian pinks (Spigelia marilandica), a graphically spectacular bloom of bright red with yellow highlights.  For better or worse, because I love both of them, I planted both of them in my front flower bed...pretty close to each other. 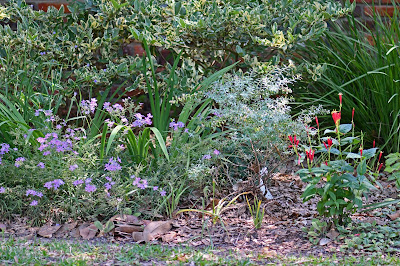 And they clash.  Even to my eye, they clash.  (The phlox is on the left, the Indian pinks are on the right, and a Darrow's blueberry is in the middle.)

I guess I figured that one of them wouldn't do so well, leaving just one for me to enjoy, but they fooled me!

Now I have a dilemma.  Which should I transplant, if either?

The downy phlox provides great color for months AND it stays low.  It blends well with foliage of the Darrow's blueberry subshrubs (Vaccinium darrowii) that are also doing well in that bed and with the spiderwort (Tradescantia ohiensis) and the blue-eyed grass (Sisyrinchium angustifolium) that bloom spectacularly in the front gardens during the spring. 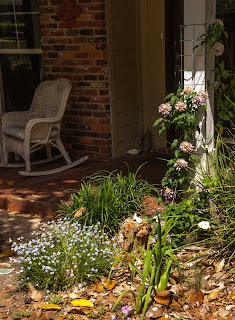 The Indian pinks bloom for a much shorter period of time than the downy phlox, but I have a special place in my heart for them.  I've tried them unsuccessfully in both my Mobile and in my Clearwater, Kansas, gardens, so having them do well here is exciting.  Truthfully, I'm a little scared to transplant them and risk watching them wither in a different spot.

The first time I saw Indian pinks was on a garden tour in Baton Rouge, Louisiana, where they provided a thick, blooming carpet on a shady hillside.  I've never forgotten that spectacular sight.

While the Indian pinks clash with the downy phlox (and truthfully with the Darrow's blueberry too), they look great with the native columbine (Aquilegia canadensis) that seems to have found a happy home in my garden where it has started to seed itself about a bit. 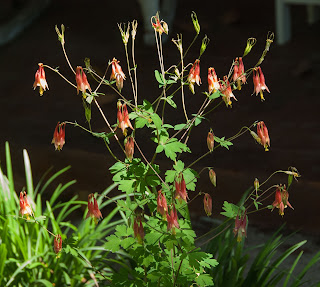 So far the columbine hasn't seeded itself close to the downy phlox, but it would clash, too, if they grew in close proximity.

So, fellow gardeners, any thoughts?  I won't promise to follow your advice, but I value it nonetheless!  Maybe your thoughts will help me clarify my own.....
Posted by Gaia Gardener: at 7:20 PM 5 comments: