"Lab Girl", A Memoir of a Female Scientist Forging Her Proper Life

Do you have behaviors that you wish you'd begun when you were younger?  I know I do.  One of my regrets is that I didn't read more biographies, memoirs, and autobiographies when I was in my teens, 20s, 30s, and even in my 40s.  I especially regret that I didn't read more about the life stories of women that I admired, so that I could get a wider understanding of what being a woman in our culture entailed, both positively and negatively.

Regrets aside, I've started reading more biographies and memoirs in recent years.  I love the perspective it gives me on possibilities, life choices, the cost of fame, the commonalities that we all experience, and a myriad of other issues, both philosophical and mundane. 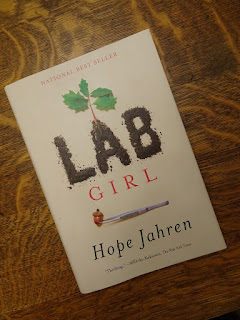 I don't remember where I first heard about Lab Girl by Hope Jahren (Alfred A. Knopf, 2016) or what the reviewer said about this book, but I immediately knew I wanted to read it...and I am so glad that I did.

Hope Jahren was born in 1969, 13 years after I was born, into a family with a father who was a scientist and teacher, a highly intelligent mother who was a housewife, and 3 older brothers.  She learned to love science in her father's classroom laboratory and, building on the platform of a rather ordinary childhood, she has become an award winning geobiologist, recently based out of the University of Oslo.

It's rare to find a book, written by a scientist who based the thematic structure of the book on plants, described as "mesmerizing", having a "zing", or "electric".  These words have all been used to describe this book, and they are spot on.  Dr. Jahren intersperses vividly written and lyrical short chapters on plant biology with engrossing tales of the people and the events in her life that have helped shape her into who she is today.  Incidentally, in her childhood Dr. Jahren studied English literature with her mother, as her mother worked to earn the bachelor's degree that she'd been unable to obtain before marriage.  Dr. Jahren herself started college as a literature major before realizing that science was her true passion; her facility with words and metaphors and her compelling prose betray her ongoing love of language, despite her choice of science as her career path.

From this book, "Each beginning is the end of a waiting.  We are each given exactly one chance to be.  Each of us is both impossible and inevitable.  Every replete tree was first a seed that waited."

Lab Girl is a seed that has been cast out into the world to germinate.  Whether it develops into a towering oak or stays a struggling seedling depends in great part on how deep and rich the soil is upon which it lands, how many people read it and absorb the wisdom it has to offer, then pass that wisdom along.   Most of all, I can envision Lab Girl bearing valuable fruit such as young girls being able to see a path forward if they choose science as a viable life path and ordinary people learning to see plants as the living heroes of our planet that they truly are.

Read this book.  Judge it for yourself.  Then let me know what you think.  I'm betting you'll be encouraging others to read Lab Girl, too.
Posted by Gaia Gardener: at 7:36 PM No comments:

A Trickle of Native Insects Begins to Appear....

FINALLY!  We've lived here for about 16 months now and at last I am beginning to see a greater variety of  insects attracted to and living in our yard.  It's so exciting to go outside and see native pollinators nectaring at the few little blooms we have scattered around, or predatory insects patrolling the foliage and flowers.  It sure goes to show that changes don't have to be big or dramatic to have an impact.  Every little bit counts.

So here are some of my recent finds.... 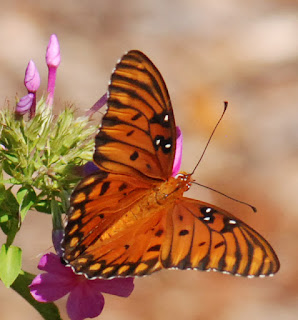 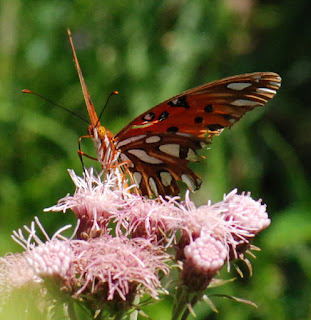 Gulf fritillaries (Agraulis vanillae) are gorgeous butterflies, with silver patterns on the undersides of their wings and an almost fluorescent orange coloration on the top side.  The fresh individual in the top photo was nectaring at garden phlox (Phlox paniculata), while the tattered one in the lower photo is nectarying at Flyr's Nemesis (Brickellia cordifolia), a rare wildflower in Florida that has recently become available at some native plant nurseries, including 7 Pines Native Plant Nursery in DeFuniak Springs. 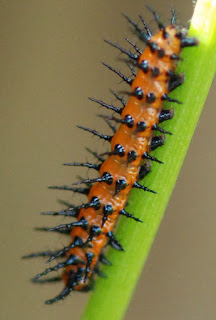 Out and about, I'm seeing more gulf fritillaries flying everywhere these days, presumably due to the time of year.  However, I'm starting to count on seeing them regularly in our yard since we finally have some caterpillars eating the maypop vines (Passiflora incarnata) that we planted on the lower terraces last spring.  Just as monarch caterpillars only eat milkweeds, plants in the genus Asclepias, so gulf fritillary caterpillars only eat maypops and passionflowers, plants in the genus Passiflora.

Predators are pretty rare in the yard still.  It took me around 5 years to start noticing them regularly in my Kansas gardens, so I'm trusting that they'll increase in number as I garden naturally here.

With a lake right out the back door, however, we do have several dragonfly and damselfly species.  One of the species I've just started to see is the eastern amberwing (Perithemis tenera).  A male and a female have staked out the small patch of powderpuff (Mimosa strigillosa) in the front yard and I can count on finding them there essentially every day. 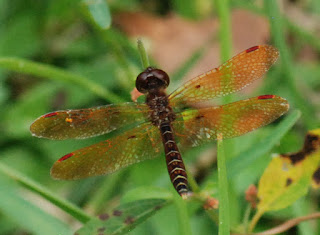 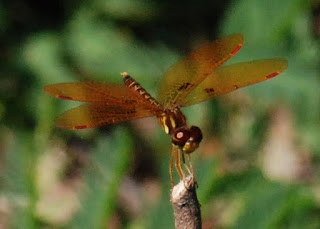 Although this species is quite small for a dragonfly, the male eastern amberwing, shown above, is easy to spot since he's dramatically colored, with shining amber-colored wings and a darker amber body.  Up close, the camera captures yellow markings on the thorax and abdomen that the eye generally misses.  The female, however, is much different.... 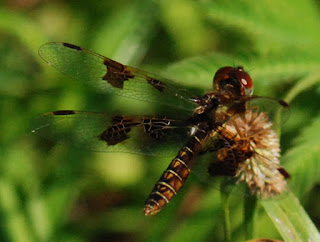 ...and much drabber.  Her darkly blotched wings and more sober colors don't attract the eye as her mate's colors do, but that's probably the point.  She, too, has yellow markings on her thorax and abdomen.

These small dragonflies are said to eat "tiny, flying insects", which I interpret to mean mosquitoes.  Hopefully my male and female eastern amberwings will produce lots and lots of baby eastern amberwings to patrol my yard even more thoroughly! 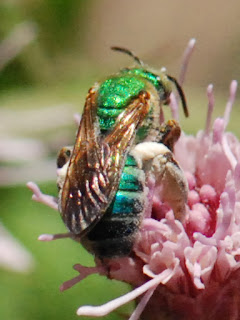 Shown above, the females of Agapostemon splendens are especially beautiful to my eye and earn their "splendid" moniker based on the beautiful shadings of blue and green on their abdomen.  Note:  I have no real idea why this species was labeled the splendid green metallic bee, but I think the abdomenal color IS splendid. 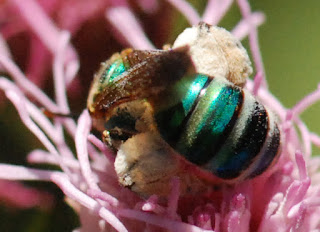 Here's another, closer look at that gorgeous color.  Look, too, at the pollen load that this little bee is carrying - the pollen from this species of flower is white, not yellow, and that's a LOT of pollen clustered on her hind legs!  She still has to finish her load and, most importantly, fly back to her nest with her carefully gathered provisions.  Like many other native bees, the Agapostemon bees nest in the ground, usually in a tunnel dug by the female.  After digging the tunnel, the female gathers together a ball of pollen and nectar, lays an egg on it, seals off the cell, and repeats the process several times. 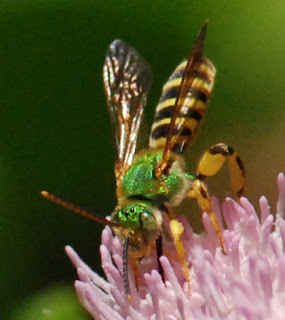 Interestingly, like the eastern amberwing dragonfly above, Agapostemon splendens is another dimorphic insect species, with the male looking significantly different from the female.  The photo above is a male of the same species.  While the thorax is similar to the female's, the abdomen is completely different - males sporting a natty black and yellow stripe pattern that is vibrant, but not as pleasing to my eye.  This little guy was fun to watch.  He seemed to perform head stands as he fed, diving deeply into the flower to get his prize.

Unlike the colorful green metallic bees, the next bees I want to share with you are somber black with a few white markings. 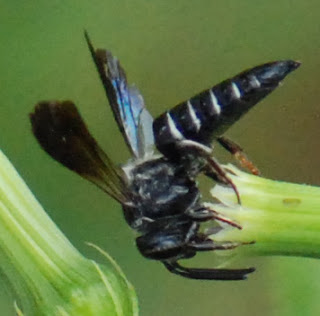 Another native bee, this is a carpenter-mimic cuckoo-leaf-cutter (Coelioxys dolichos) - a name that seems more interesting than the bee looks, at least on first appraisal.  That's the bloom of a wild lettuce (Lactuca sp.) that she's feeding on.

What drew my attention to this bee was the pointed abdomen, which is very distinctive.  Cuckoo bees are parasites on other bees.  The females of this genus of cuckoo bee, Coelioxys, use that sharp abdomen to break into the nests of their host species and lay eggs on the pollen and nectar stored there for the host's eggs.  Because female cuckoo bees don't have to provision their own nests, they don't have pollen baskets and they aren't seen carrying pollen;  they do, however, still have to feed themselves.

This particular species, the carpenter-mimic cuckoo-leaf-cutter, is a parasite on a single bee species called the carpenter-mimic leaf-cutter bee (Megachile xylocopoides). Ironically, when I went to look up M. xylocopoides, I recognized the pictures as showing the same species as another, unidentified bee species in my recent photos!  I even took the photos of the two different species within a few feet of each other, just 1 day apart! 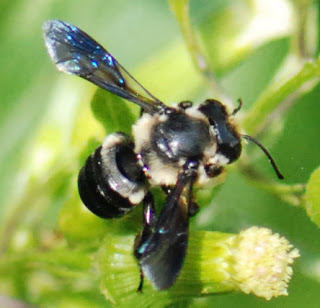 Here is the male carpenter-mimic leaf-cutter bee (Megachile xylocopoides), also feeding on wild lettuce blooms.  Did the two bees, the predator and the prey, hatch out of the same nest?  There's probably a good chance of it.  At the very least, it would appear that the nests were nearby.

There are many more sightings I'd love to share, but this post is long enough for now.  Hope you're seeing lots of interesting insects in your gardens, too!