The Spirit of the Garden 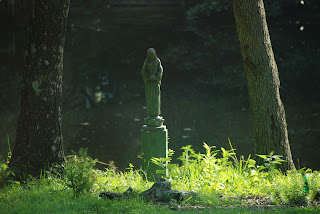 When I got back from my adventure with our son Sean in Boston, Greg had a surprise for me.  He had installed my garden sprite while I was gone.

My sprite has graced 3 gardens now:  first in Mobile, Alabama, where we purchased her;  then in Clearwater, Kansas; and now in Ft. Walton Beach, Florida.

By the time we brought her home in Mobile, I had been gardening there for several years and I knew exactly where I wanted to place her.  However, in my subsequent two gardens, it has taken me a while to figure out where she should stand.  Greg and I had talked about where she should be in this yard, but I never dreamed he'd be able to set her up by himself!

Each time she gets placed, the garden suddenly feels graced by her presence. 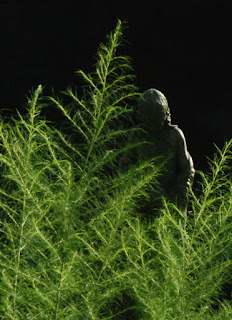 Given the name of this blog, I've come to think of this statue as representing Gaia, the spirit of Earth.  She becomes my touchstone as I make decisions about caring for the land over which she stands guard.
Posted by Gaia Gardener: at 8:01 PM 6 comments:

Pollinators and Other Creatures in the Garden

For the first time in quite a while, I was able to slip outside and take a few photos in the yard and gardens yesterday.  I didn't get great shots and I haven't had time to identify the animals, mainly insects, that I found, but I thought you might enjoy seeing them anyway.

I thought I was off to a great start when I found this black-winged damselfly as soon as I stepped off the back patio.  He was resting on a leaf of blue-eyed grass. 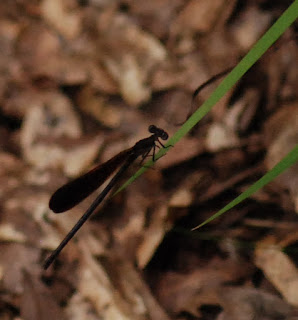 While I was taking the damselfly's photo, I noticed movement on the ground, in the verbena, about 2' away.  Doing some minor poking around, I was able to get a quick shot of this good-sized wolf spider lurking in the vegetation. 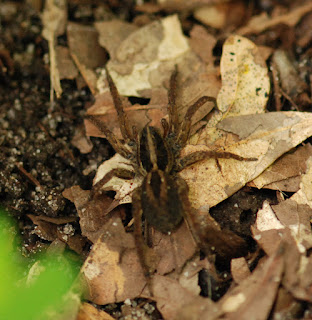 Next I walked around to the mailbox area, with its gay skirt of blooming gaillardia and butterfly milkweed.  Over the last month, I've seen more pollinators in this little 6 square foot area than in the rest of the yard combined, I think.  This little bee was busily gathering pollen from the gaillardia. 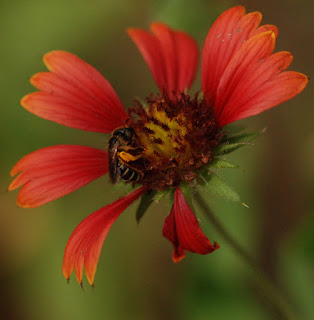 After the bee flew off, at first I didn't see any other action, then I noticed a colorful wasp hanging around.  This photo is rather blurry, but I wanted to show the overall markings of this gal... 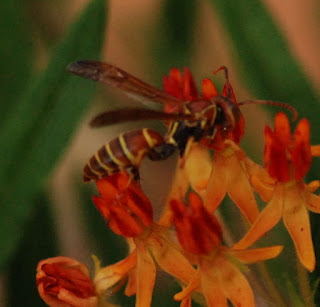 ...before I shared my favorite shot, which shows how her big, compound eye curves around the base of the antenna on her face. 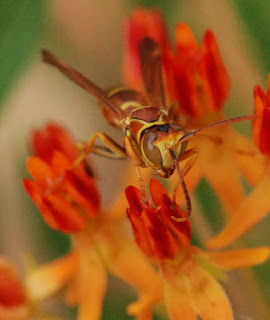 Isn't that an amazing detail?!

Last of all, I found several insects on the aquatic milkweed (Asclepias perennis), despite its diminutive size and somewhat anemic appearance so far in my garden.  Truthfully, I only really noticed ONE insect at first - this small, dark bee.... 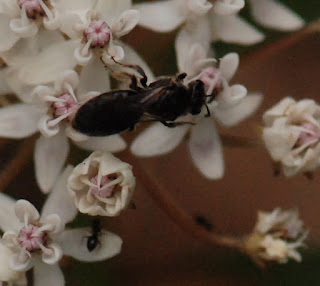 ...but note the ants that were also on the flowers.  I didn't see them until I downloaded the photo and magnified it. There was also a tiny fly hanging around, but I didn't get a clear enough photo of that one to share.

So that, fellow gardeners, completes the portfolio of "Pollinators & Others" that I found during my 25 minute walkabout yesterday afternoon.  I was a little disappointed not to find more insect life, but it's early days/months/years in my gardens here, so I guess it's not too surprising that the diversity is minimal.  I'm hearing, too, that insect life is on a major decline throughout the country, so maybe my quiet yard is just indicative of a larger problem.

Time will tell.  Meanwhile, I'm doing what I can, where I can - and enjoying the rewards that I am given.  I'll just hope to see more on another day.
Posted by Gaia Gardener: at 8:13 PM 3 comments:

Update on the Florida Scrub Skullcap

I should have waited a couple weeks before highlighting the Florida scrub skullcap (Scutellaria arenicola) in a post.  When I got back from my trip to Boston, where I helped to create a pollinator garden for Sean, the skullcaps were in full bloom.  How full of blossoms the plants are and what a beautiful blue those blooms are! 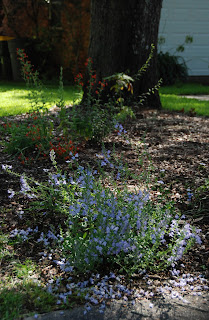 You can see from the number of flowers dropped on the ground that they've been blooming for a while and were probably even a bit showier than they are in this photo.

Just for kicks and giggles, here are a couple closeups.  The first is of the blooms... 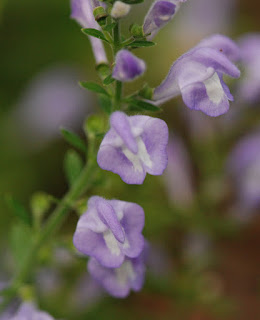 ...and the second is of a bloom spike about to break into full bloom. 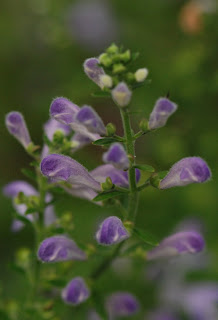 This is their first year!  I am so glad that I picked these up from Dara and I hope they continue to do well and even increase in future years.
Posted by Gaia Gardener: at 6:38 PM 3 comments:

A Satellite Garden for Pollinators...in Boston

Several years ago our son purchased a condo in Somerville, Massachusetts.  As is typical in a large metropolitan area, there isn't much land around the building, but Sean's been talking with me about creating a pollinator garden on the small plot that he has.  Over the 4th of July weekend, we were finally able to make that happen.

Here is the space that we started with..... 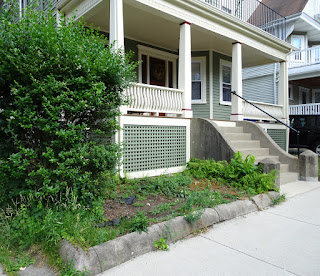 Of course, since we're talking an area that has been built on for over a century, there was plant material already in place.  Most of it was exotic, if not exotic AND invasive:  black swallow-wort (a vine related to milkweed), Vinca minor, white sweet clover, crabgrass, fescue, and a cranesbill of some sort.  We removed all of these except the cranesbill, which didn't seem to be invasive and which was creating a nice small carpet with a few purple flowers.

Then there were the native plants:  an oak seedling, 2 maple seedlings, lots of hay fern, and and a couple violets.  Pretty as the hay fern was, it was obviously too aggressive for this small an area, so we reluctantly removed it.  There was still plenty of it on the north side of the house. Of course, the tree seedlings had to go, too.  This is definitely not a big enough space for an oak or maple tree.  We did try to keep the violets...although they got pretty mangled during the whole process.

The large shrub at the north end of the garden space is an old privet which technically belongs to the next door neighbor, so we didn't try to do anything with it.  There is black swallow-wort and Boston ivy growing up in it, as well as a maple seedling or two, so Sean will have to keep a close eye on it to keep those plants from infringing on his new pollinator garden.

My biggest concern for this project was finding appropriate, non-pesticide treated, native plants to form the biological base of the new garden.  Searching online, I located Garden in the Woods, a nature area run by the New England Wildflower Society.  It's in Framingham, which isn't too far out of the city, and they sell native plants.  We fired up the cell phone navigation system and made our way out there on Saturday morning.  Woohoo!  Paydirt!  Even in early July, long after sensible people have put in their new gardens or renovated their old ones, Garden in the Woods still had a nice selection of Massachusetts' native plants.  My only regret in going there was that we didn't have time to hike their trails.

On the way back, with Sean's car mostly full of native perennials, we stopped at Russell's Garden Center and bought a few tools, compost and mulch (plus a small butterfly milkweed).  Now the car was really loaded down.

I should have taken a photo of the car, but I didn't think about it. I was too psyched about getting busy, digging in the dirt.

Luckily for me, I got to be the "consultant".  Sean did the vast majority of the actual physical labor, but I got to get my hands dirty enough to feel like an integral part of the project.  The steps were pretty basic: we pulled out and discarded all the plants that we didn't want, making sure that we got as many of their roots as possible, then we spread a layer of compost over the open soil to be worked in as we planted the new perennials.  Fortuitously, the soil turned out to be better than I expected.  Next we placed the plants and Sean dug the holes - same depth as the pot, but twice as wide - before he planted each new garden member carefully, being careful to loosen the root balls as appropriate and to water each one in thoroughly.  The final step was to mulch.

By Sunday afternoon, here is what Sean's new pollinator garden looked like.... 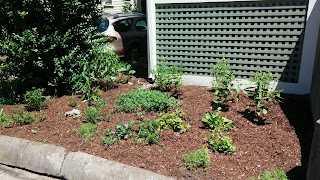 The poke and common milkweed will move around;  Sean will just pull out any that come up in a place that he finds displeasing.  Hopefully the monarchs will eventually come to visit - and maybe even to lay eggs.

The garden is planted fairly densely;  the look will hopefully be "cottage garden" in style.   I'm really excited to see how it grows and matures over the next few years.  Most of all, I'm looking forward to seeing the pollinators that it will be supporting.  Every little bit helps!
Posted by Gaia Gardener: at 8:27 PM 6 comments: