In walking through the Eglin Air Force Base Recreational Area last week, I found a plant I'd never seen before - a goldenrod that was relatively short, staying about 18-24" tall, and that grew at the edge of the forest.  I'd seen this plant blooming profusely along all the roadsides about 3 weeks earlier when I was visiting in early November, but I didn't recognize the species and I wanted to find out what it was. It was gorgeous!  The size was perfect for a garden setting.

As I started walking down the old, sandy road and got past the first flush of berries and goldenrod seedheads, I started noticing a different, shorter, past-prime goldenrod flower that seemed to be associated with a small, woody shrub.  Looking more closely, I realized that the spent blooms were actually a PART of the small woody shrubs I was seeing. 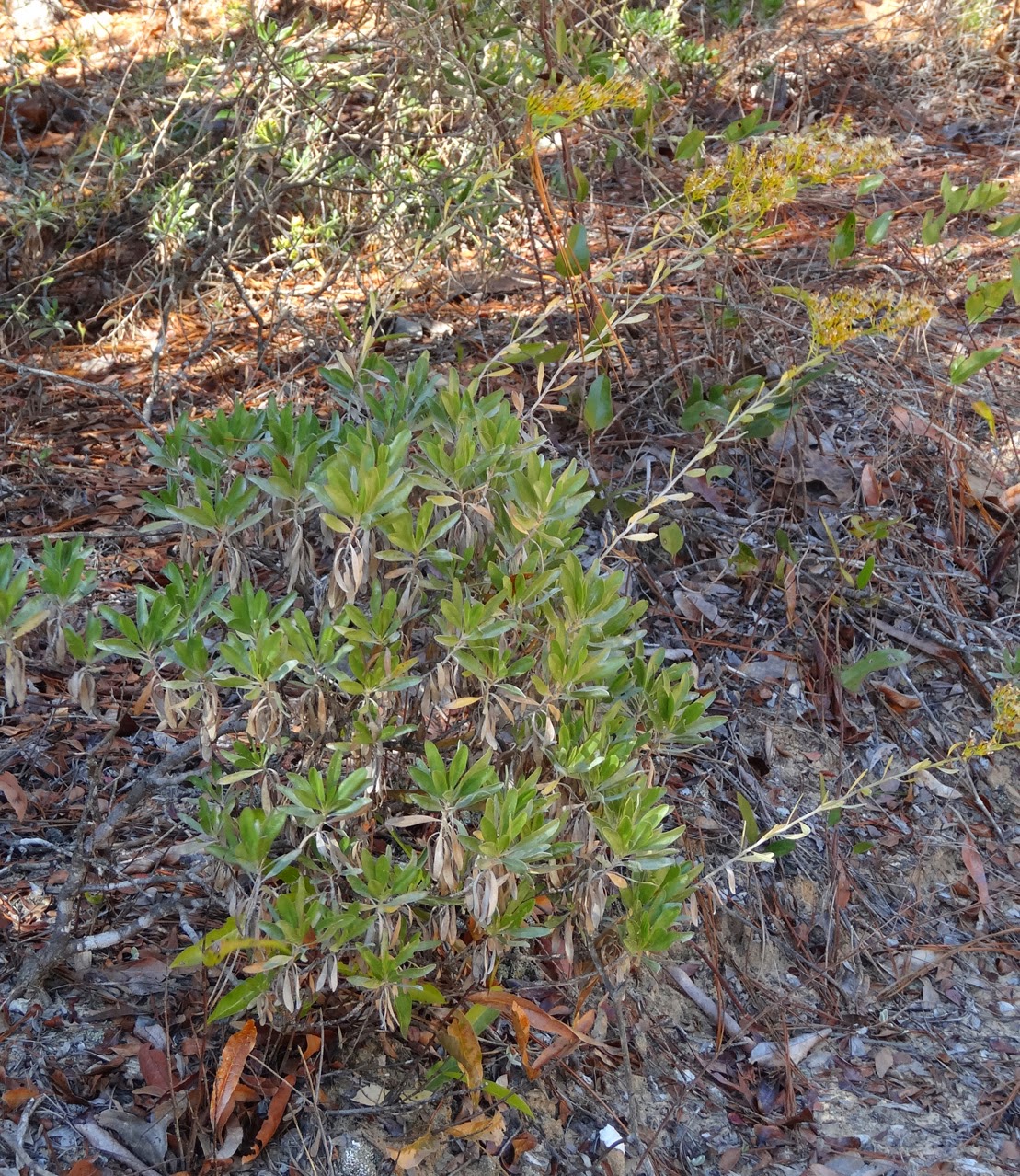 Those blooms seriously looked like goldenrod.  Could there possibly be a woody species of goldenrod?!  I took some photos so that I could investigate a little more later....

Lo and behold, when I got back and started looking, there was a plant whose common name was woody goldenrod!  When I looked at the photos, there was little question that this was the plant I had been noticing.  What were the chances that I'd be able to identify a new plant that quickly, especially in an area that I hadn't been actively gardening in for 8 years?!

What was my mystery plant, a.k.a. woody goldenrod?   It's Chrysoma pauciflosculosa, previously known as Solidago pauciflosculosa.  It is exactly what I thought it was:  a woody goldenrod shrub that maxes out about 2' tall.  It's the only woody goldenrod, so it has been assigned to its own genus, although it's still occasionally called by its old moniker, Solidago.  Once established, woody goldenrod grows in pure sand soils and handles drought without issue.  Because it needs deep and widespread roots to handle drought in sandy soil, it is almost impossible to transplant and thus it is hard to find in the horticulture trade. 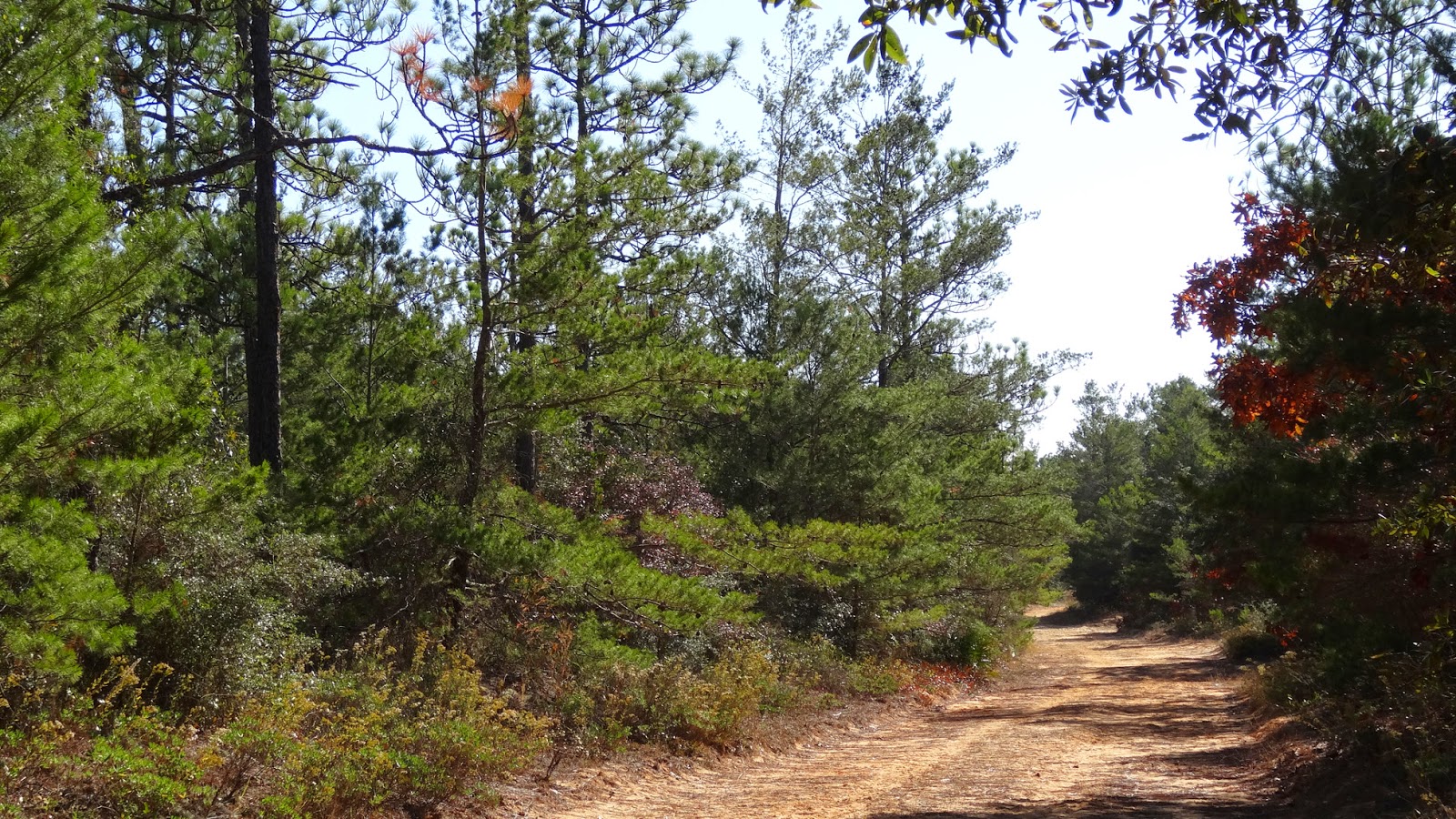 If you look along the left edge of this road in this photo, much of the low vegetation here is woody goldenrod, beginning to go to seed.  Even in this natural setting, without any supplemental water or fertilizer,  woody goldenrod is compact and low.  It makes a great border plant.

I gathered some seed, which I scattered in Jess's garden.  Hopefully some of the seed will sprout, since finding this plant in the horticultural trade is generally difficult.  Remembering the roadsides lined with this beautiful fall gold, though, I'm seriously hoping to have it crop up in her garden.  I'll be sure to let you know if it makes its presence known.

I hope you get some going!!!

How exciting to find a new to you plant! I hope othe seeds grow and take off for you. I can just imagine the sunny yellow flowers!

I hope the seeds sprout in Jess' garden. I didn't know there was a woody goldenrod. One that tough and low-growing sounds like a great garden plant.

Thanks, everyone, for your well wishes!