Reindeer Moss - But There Were No Reindeer in Sight!

'Tis the season to talk about reindeer, so it seems appropriate to share about the reindeer moss I saw in the Florida panhandle last week. 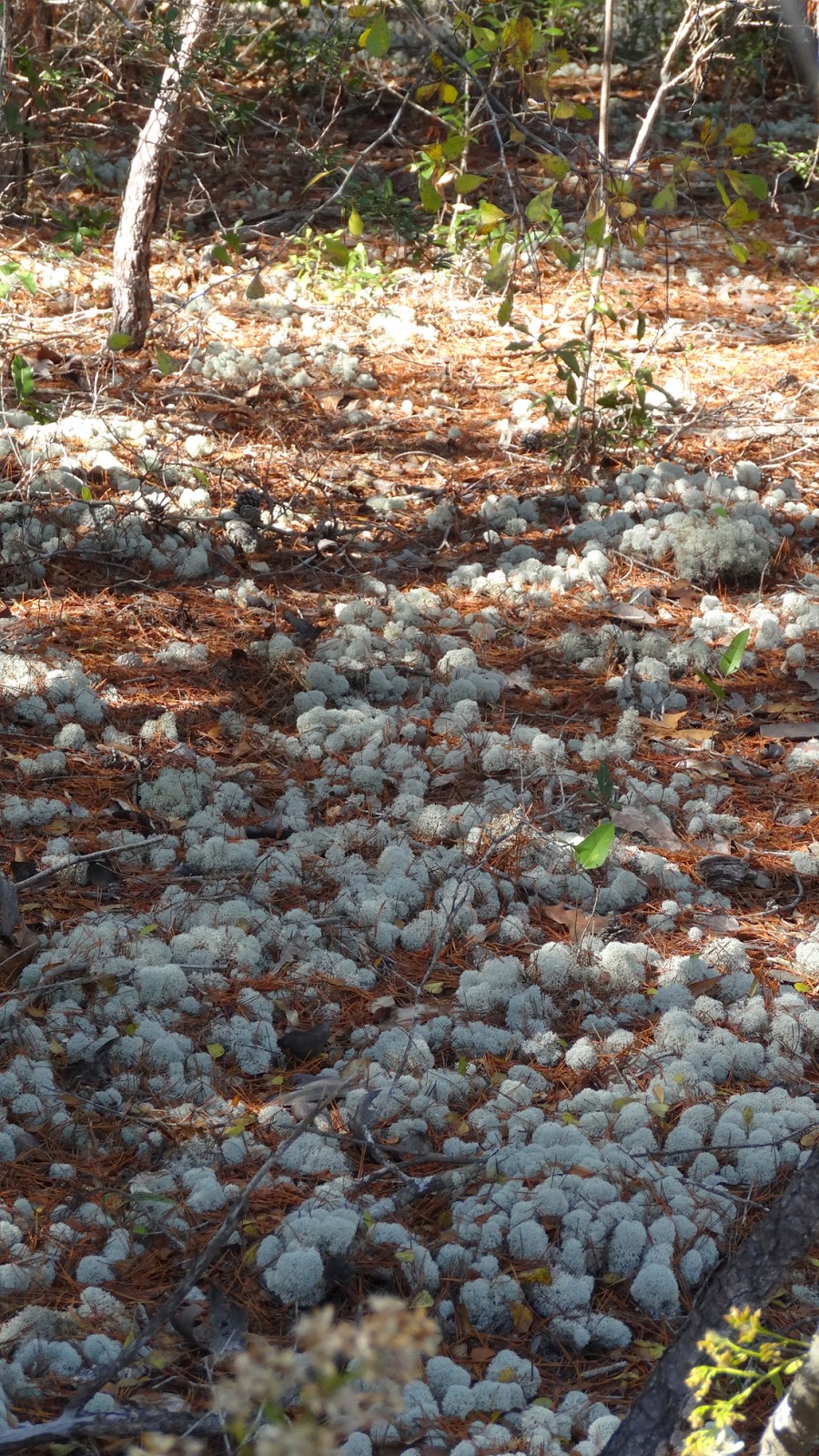 Talk about something you're not likely to see in Kansas - take a look at this cool groundcover! 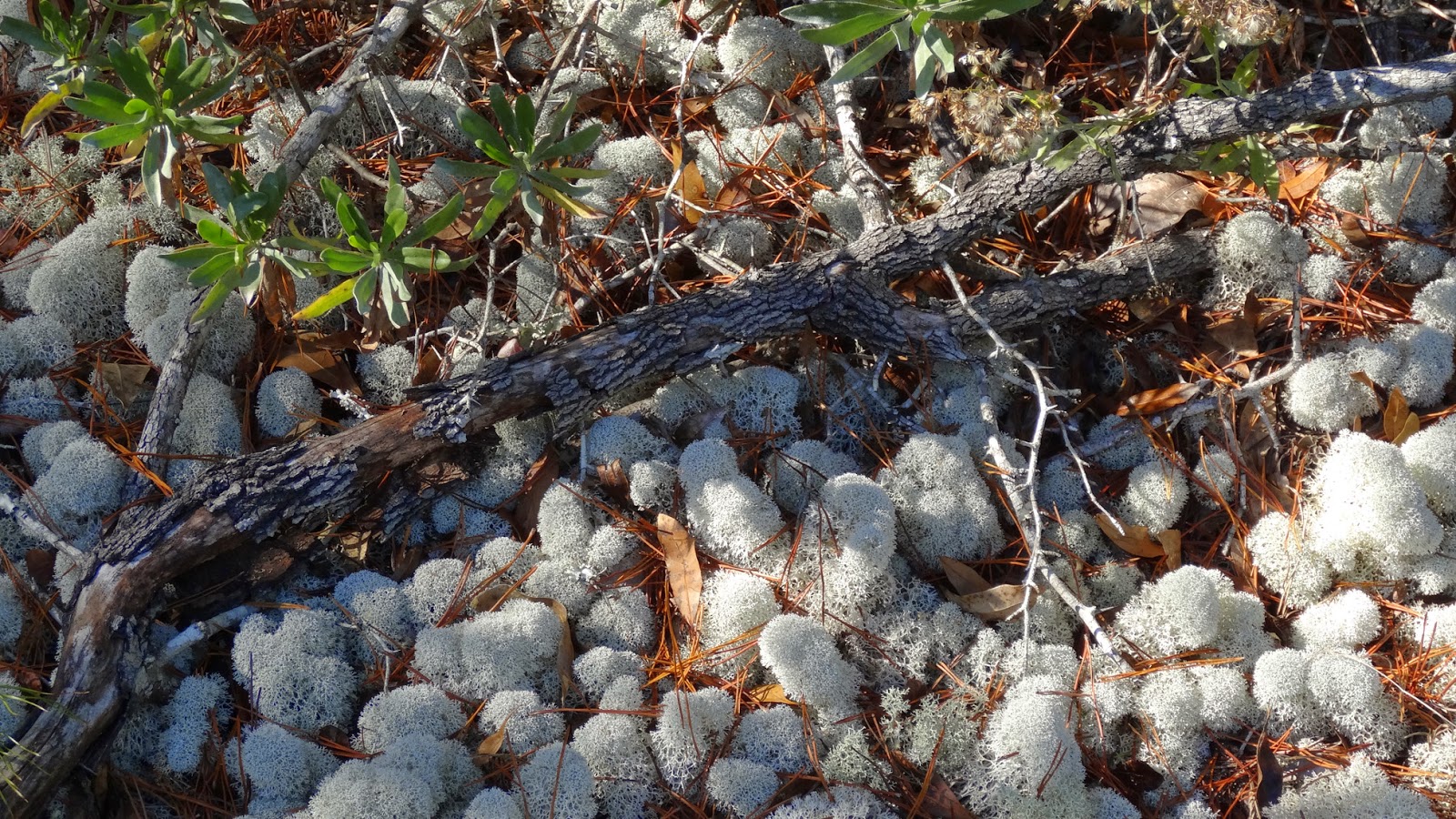 Called reindeer moss, this is actually a type of lichen classified in the genus Cladonia.  Lichen, if you don't remember your high school or college biology course, is actually a sort of conjoined organism, made up of an algae and a fungus with a symbiotic relationship.  They act in concert, seemingly a single organism.  They have no roots, but instead get their nutrition from their environment - the sunlight, water, minerals and air around them.

Lichens grow slowly - generally about 1-2 tenths of an inch/year.  Because they are so slow-growing, they don't take disturbance well.  In fact, if there is much disturbance, they will disappear quickly.  It can take them decades to reappear, if they ever do.

So when I see reindeer moss, I get pretty excited.  It means that the area doesn't get much foot traffic and is generally undisturbed. 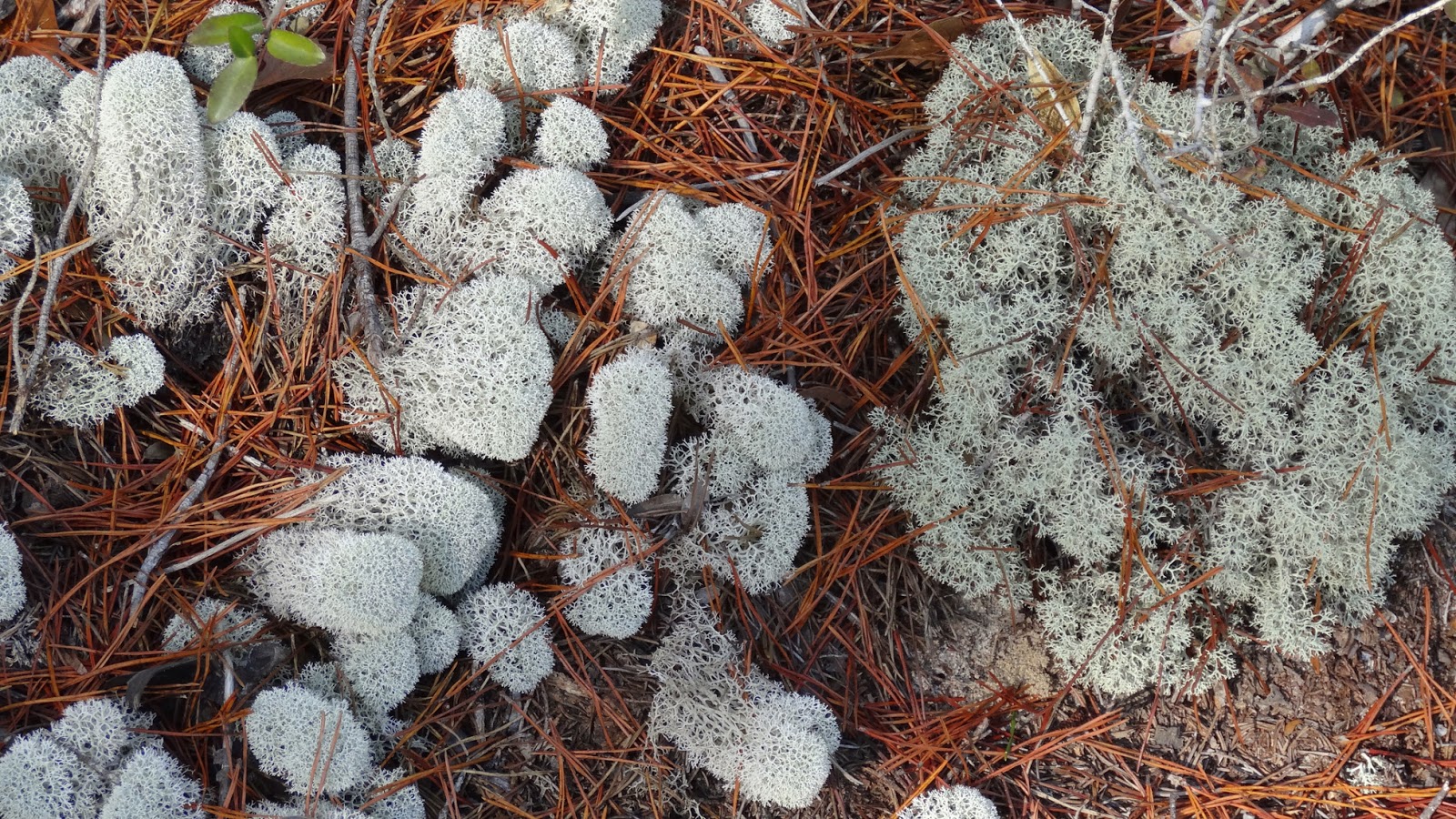 On our walk through the Eglin Air Force Base Recreational Area, I not only saw one species of reindeer moss, I saw TWO species!!! 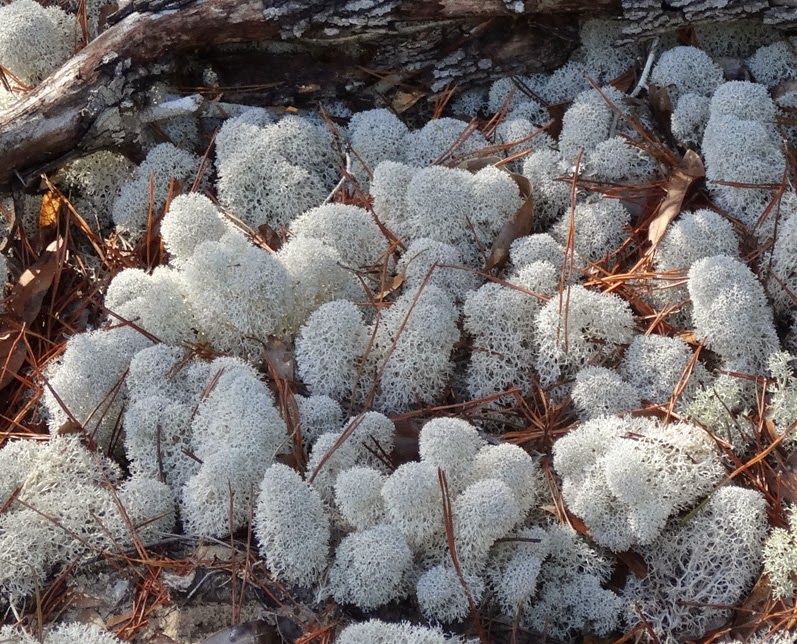 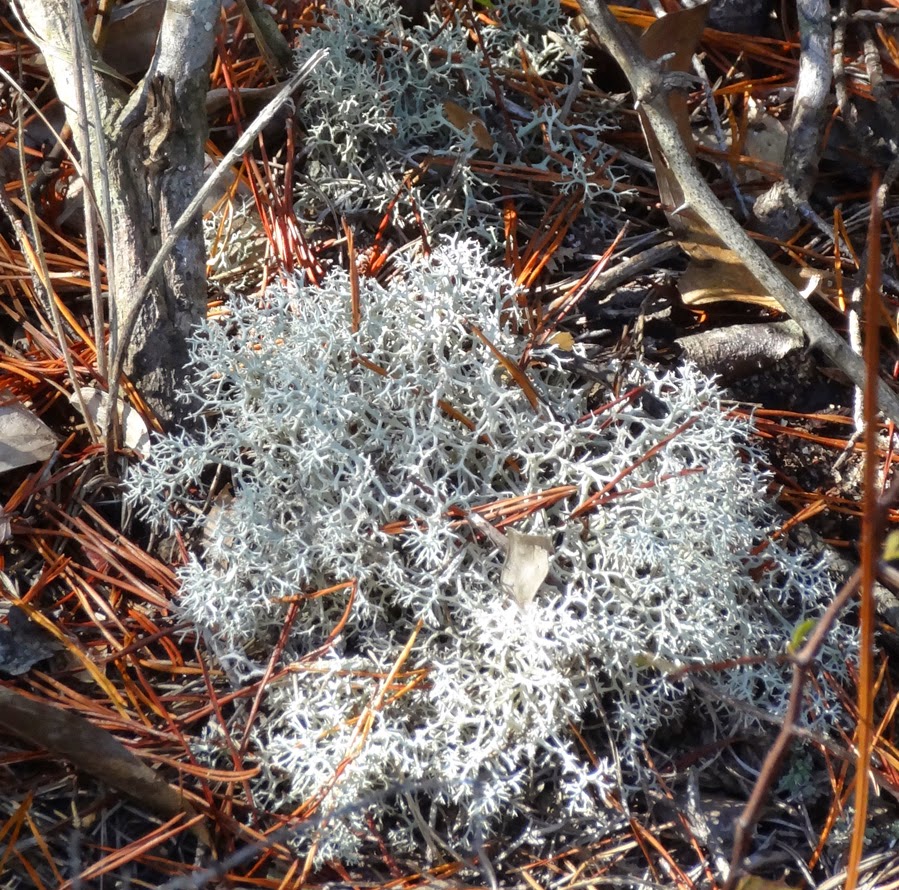 but this species I haven't found a specific identification for.  So, for now, I'll just call it reindeer moss (Cladonia sp.). 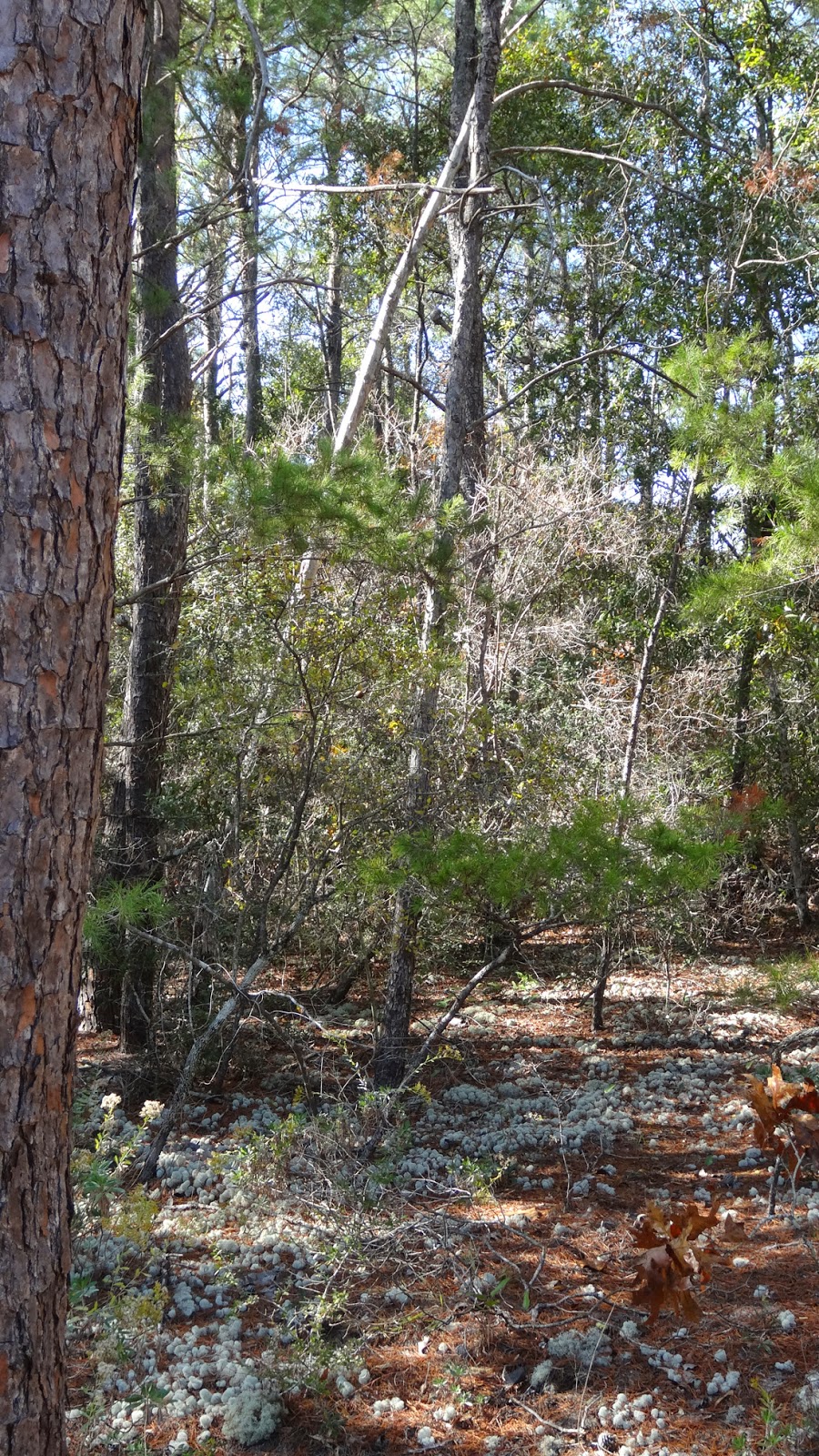 There were several areas with large carpets of these two species - and I must admit that I get a little thrill every time I see any type of reindeer moss, so I was doubly excited to see so much of it in this recreational area! 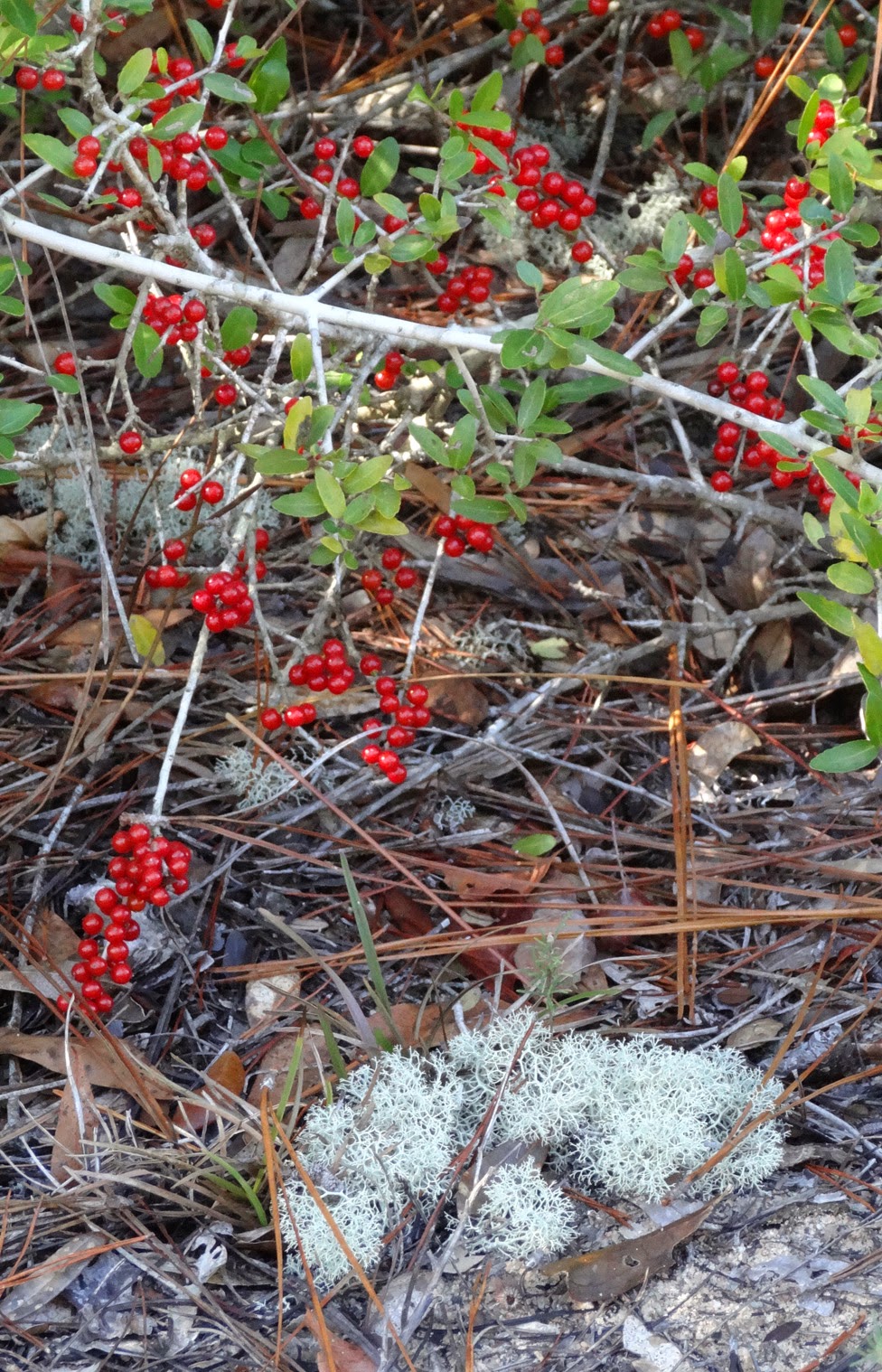 Kudos to the Air Force for being able to take such good care of their natural areas.
Posted by Gaia Gardener: at 4:42 PM

Reindeer moss -- this is completely new to me. It has the perfect name since it looks like snow on the ground!

Cool! I am in Florida and I'm going to be on the lookout for this - ironic that reindeer moss would be in Florida, eh? I am not sure if I'm technically in the Southern Panhandle but I can just picture something like this growing here and around Cedar Key. I find lichens fascinating and love the patterns they make on the rocks and tree bark at my permanent home in Clayton NY. Thanks for sharing and good point about the foot traffic!

I don't remember where or when I learned about reindeer moss, but when I was researching a bit before writing about it, I learned that it is actually a major food for reindeer! There are (not surprisingly) many different species, but the entire group is now called reindeer moss, whether each individual species lives where reindeer can eat it or not.

Kathy, I hope you can find some reindeer moss. It doesn't take disturbance well at all, so you need to look for it in relatively undisturbed areas - perhaps in some of the refuges around Cedar Key. Since it's found around Ft. Walton Beach, I'd be surprised if it isn't found in Cedar Key - they're not that different in habitat!