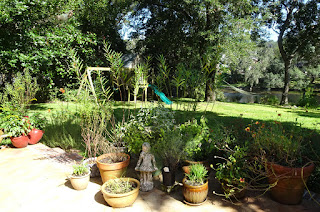 Last spring, for the first time ever, I intentionally tried to find native plants that would work well in containers to sit on our back patio.  While I found a few, I would love to have a wider variety in my "stable".  I thought I'd share what worked and what didn't work for me - and I hope you'll share your favorites in the comment section to guide me this spring.

First of all, a disclaimer:  All of the photos in this post were taken on October 3rd, when I actually decided to post about this topic.  Most of the plants were well past their prime at that point, for which I apologize.  I find that I didn't take pictures of the full plants earlier in the summer;  I just took photos of the bees and butterflies and assorted other insects that were using them, especially their blossoms, for food and shelter!

Since we have no plant nurseries closer than about 45 minutes away, in trying to develop a native plant container garden, I started out at our local Home Depot.  There, I looked for plants that weren't labeled with the "sweet" little tags that essentially say, "I've been treated with death-causing chemicals so that you can have pretty flowers."  As I looked, I found that I had to be very careful:  some plants that were obviously from the same grower and batch weren't labeled, while others were.  Most disturbing were the numerous "butterfly" plants that I saw touted...while they bore that telltale, nasty little tag.

At Home Depot, then, I bought 3 "butterfly milkweeds" and a Coreopsis?/Rudbeckia?  As they grew, the butterfly milkweeds turned out to be Tropical Milkweeds (Asclepias curassavica) rather than Butterfly Milkweed (Asclepias tuberosa), but at least they weren't treated with neonic pesticides.

Know how I knew for sure the milkweeds hadn't been treated with neonics?  They had aphids on them, including one individual with a pretty bad case of them.   Yes, I intentionally bought a plant that was seriously infested with aphids - and I was glad to get it.  Once I got them home, I didn't do anything but pot the milkweeds up.  As I've discussed before, the aphid populations cycle up and down, based on natural predators, so I wasn't too worried about them.  The 3 milkweeds are doing fine, even if they aren't actually native here.  In fact, these three tropical milkweeds from Home Depot are the plants on which I've observed (and photographed) most of the aphid/predator cycles that I've shared with you on this blog.

Note:  The tropical milkweeds are the leggy background plants in the photo above.

The Coreopsis/Rudbeckia (I can't remember which it was) was the only other "near native" I could find at our local Home Depot that hadn't been treated with neonics, so I bought it to show that some of us would rather have butterflies than poison-filled plants.  Sadly, the plant hasn't done well for me and essentially never bloomed again.  Half of it died;  the other half looks healthy, but remains bloom-less - and insect-less.

I've got a couple pots with Violets (Viola sp.) and Scarlet Sage (Salvia coccinea) that have seeded in naturally, taking over other plants like lettuce that had finished their life cycle.  Both of these naturally occurring container plants are doing well and seem worth keeping as containers, due to their attractive foliage and/or attractiveness to pollinators. 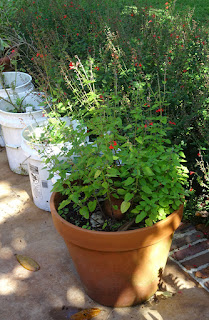 Here is the scarlet sage, which seeded itself into a container where Greg had been growing kale.  It's not gorgeous, but the butterflies visit frequently.  Next summer I'll fertilize it a bit and give it some attention;  hopefully it will be fuller and fluffier.

While the Gaillardia hasn't been the "neatest" looking container, it has bloomed prolifically all summer long and has attracted many pollinators; I will continue to include it in future native plant container gardens.  By October 3rd, most of it had started to die back, so I didn't photograph it individually.  It's the pot at the far right of the photo at the beginning of this post. 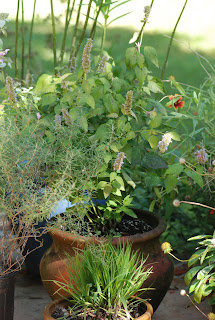 The Blue Hyssop, above, which is not actually native to the southeast, was overgrown and floppy when I got it.  I did repot it, but I didn't cut it back like I should have.  It has done well, although it has looked a bit ragged because of my hesitancy with the pruning clippers.  I will continue to include it in future native container gardens, as it has been a reliable bee attractant.  I do not know if it will overwinter, or if I will have to treat it like an annual. 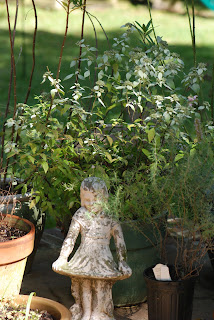 I bought and planted 2 different species of Mountain Mint this spring, but I don't remember which ones they are, let alone which is in the pot and which is in the ground.  I have the plant tags buried some where in the garage, but I am too lazy to look for them right now.  Anyway, both mountain mints are doing very well - and I love the fluffy white fullness of both of them.  Both have been good pollinator attractants;  I'll use Mountain Mint in containers again.  Hopefully the one in the pot behind my little girl, above, will be back next summer.

I'm iffy about using Blue Curls as container plants.  They bloomed well but, in the pots, the plants look quite leggy and scraggly while the flowers aren't large enough to overcome that deficit.  I think that part of this has been my fault:  I am not the most consistent waterer, and these were in smaller pots that tended to dry out fairly quickly.  In fact, I used the Blue Curls as my "indicator plants" to tell me when my containers needed watering. 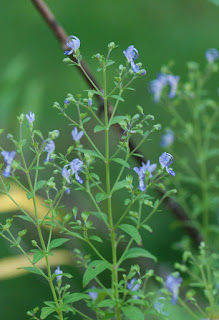 This is, in fact, the first year I've grown Blue Curls at all.  Besides the 2 in containers on the patio, I also had 2 plants in the ground, and they looked much healthier and happier than the potted ones.  I may try Blue Curls in larger containers next year, but probably only if I can't find enough other natives to experiment with.  So far, none of the Blue Curls really seem all that attractive to pollinators, despite their reputation.

Frankly, the Gaura has been disappointing.  I think I either need to find a different variety - or just not try it again.  I don't know if it's a watering issue or if it was in too much shade, but it just wimped out.

Although I didn't think to buy any to put in containers, looking at all the wonderful photos of asters, covered in pollinators, this spring I'm wondering about trying pots with a couple different species of those in them.  I'm not sure which species would be best, though, both for good bloom and for nice looking foliage earlier in the summer.

So that's my "Native or Near Native Container Plant" roundup.  Are there any species that you would recommend?
Posted by Gaia Gardener: at 9:12 PM 2 comments: