Going to the Source...So To Speak

I just got reminded about why it's better to go directly to the source than to rely on secondhand information. I was able to find the original blurb about the organic farm study in the July/Aug 2006 Audubon magazine online.

In reading it, I realized that the story was misquoted somewhat in Utne. (I am disappointed in Utne. I thought they had better journalistic standards than that.) As summarized in Audubon, the original study was a four year study, not a five year study. And while the percentage increases were correctly reported in Utne for plant species and number of bats (105% and 75% respectively), the percentage increase for winter birds was 62%, and there was actually a 48% increase in spiders. Insect species and/or numbers were still not mentioned.

My junior English teacher in high school had us do a great exercise comparing the same story as reported by several different sources. I have never forgotten how different the story was depending on who reported it.

And it makes me wonder what changes have occurred in the translation between original study and the report in Audubon.

Anyway, despite the discrepancies, the message remains the same.

Now I'm on a quest to find the original study report.
Posted by Gaia Gardener: at 9:16 AM No comments:

It's Just Better When It's Organic....

According to a 5-year study discussed in Audubon's August 2006 issue (and excerpted in Utne's Nov-Dec 2006 issue, which is where I read about it), organic farms in England have 105% more plant species than their non-organic counterparts. This provides more habitat, leading to 48% more winter birds and 75% more bats.

Not having read the original article in Audubon (let alone the actual study!), I don't know if they tallied the increased number of insect species found, but I'd be willing to bet a fair amount that insects showed similar gains. More importantly, I'd be willing to bet that insect predator species rebounded significantly, working to control insect plant eaters and balance the farms' ecosystems naturally.

If farmers, who have to make their livelihood from their land, can increase habitat and species diversity like this, just think what us homeowners could do if we all decided to go organic!

I need to try to find the Audubon article. Better yet, I'd like to read the original study. But why wasn't this study widely reported in the national news? It seems to me that its conclusions are one more clue pointing us in the direction of a healthier and more balanced lifestyle.
Posted by Gaia Gardener: at 8:34 AM No comments: 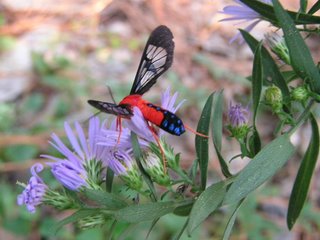 Isn't that a cool name? It's a pretty cool moth, too. Not easy to forget, once you've seen one.

I first found one dead on my doorstep, believe it or not, about a week ago. With my eyeglasses needing an update and my fantastic old loop magnifying glass playing a permanent game of hide-and-go-seek with me, I wasn't quite sure what type of insect it was. So I picked it up and saved it on a plate in the refrigerator, hoping to be able to identify it.

Two days ago in the late afternoon, I noticed several dozen of these unknown insects feeding on the asters in the back yard. I'd been enjoying all of the other "bugs" at the asters, but this was the first time I'd seen these creatures in the mix. They were even more dazzling alive than dead. (To give you an idea of scale, their bodies range from 1/2 - 3/4" in length.)

By watching closely, I was able to figure out that these guys were feeding with a proboscis, nailing their identity as a moth. I checked my guides, but the only information I could find out was that clearwing moths, as a family, are borers and can actually cause quite a bit of damage. Peach borers and dogwood borers, for example, are in this family. That caused my heart to sink, and I had visions of these beautiful insects creating untold havoc in their larval stage.

Luckily, a quick Google search set me straight. This is a scarlet bodied wasp moth, and it is indeed in the clearwing moth family. Its host plant, however, is the climbing hempvine - not what you would call an important commercial plant! This moth is considered to be a tropical species, which is why I wasn't able to find it in the guides that I had.

So I can enjoy these little beauties with a clear conscience. I've noticed that I primarily see them in the late afternoon, rather than throughout the day, despite the fact that they are supposed to be diurnal. Who knows what else I can discover about their habits as I watch them making themselves at home in my garden?
Posted by Gaia Gardener: at 5:06 PM No comments: