Do you keep a yard list of the birds you see each year?

We do.  We've found it's a fun way to keep our eyes peeled for the unusual visitor, and it's also good for remembering the cool stuff we've seen in prior years.  Sadly, it's all too easy to forget the occasional visitors, but they can provide a real spark, both when you first observe them and, later, when you remember seeing them.

We didn't do a very good job of observing birds in 2014 - but, then, we were much more focused on Florida than usual!  As of right now, I only have a tally of 53 species for last year, which is the lowest number of species I've recorded since we moved in. As I go through my photos, though, I suspect I may be able to identify one or two more species to add to the list.  For now, in 2014, we saw 53 species.

That said, the lazuli bunting last May was a yard record.  Truthfully, though, I'd forgotten I'd seen it until I saw the photos again.... 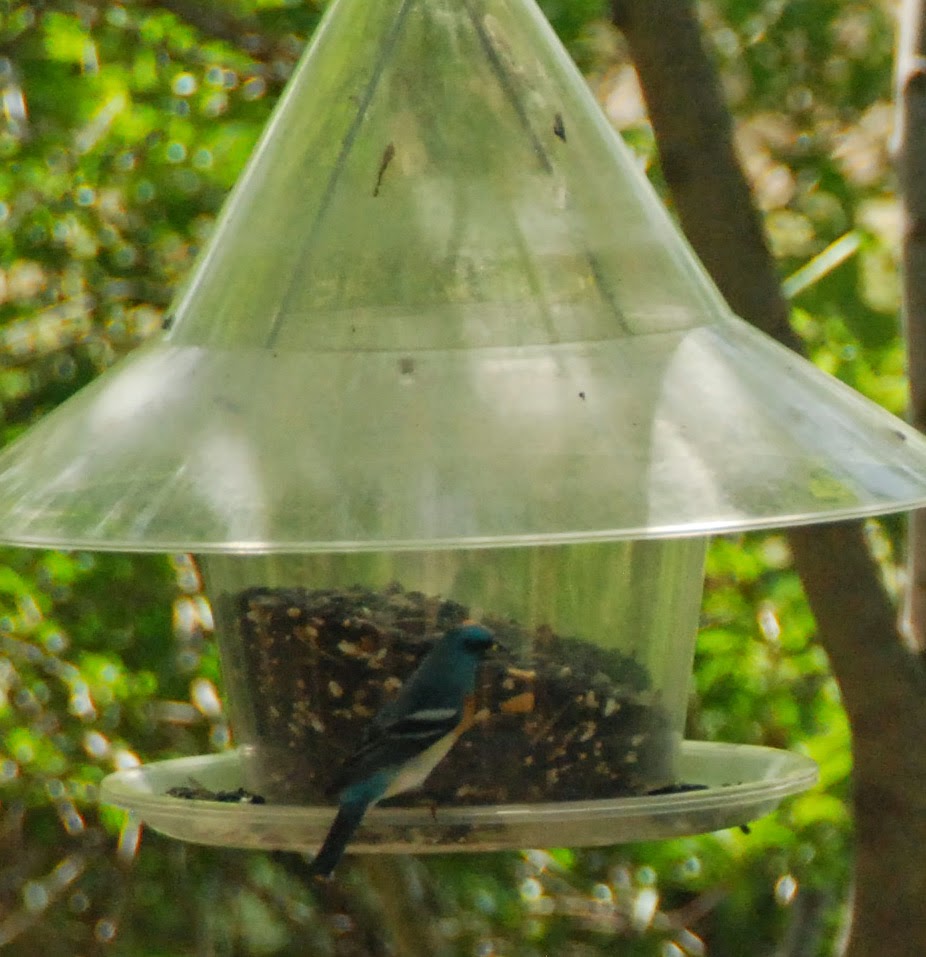 Compiled over the 8 years we've lived here, our overall yard list is now up to 121 species.  I don't think that's half bad for 10 acres in the middle of the country!

Of course, part of the fun of keeping an annual yard list is the chance to start fresh each January 1.  It's 2:13 p.m. as I write this.  Today, so far, I've tallied 20 species for our 2015 list - all of them observed from inside the house, since I'm feeling cocoonish.

Then we have the birds that are normal to us, but may be less familiar in other areas of the country.

Harris sparrows lead the list here.  Apparently they are quite rare in many areas of the country, but here they are a common, winter feeder bird.  All 3 birds in the photo above are Harris sparrows.  We generally have 30 or 40 coming in every day. 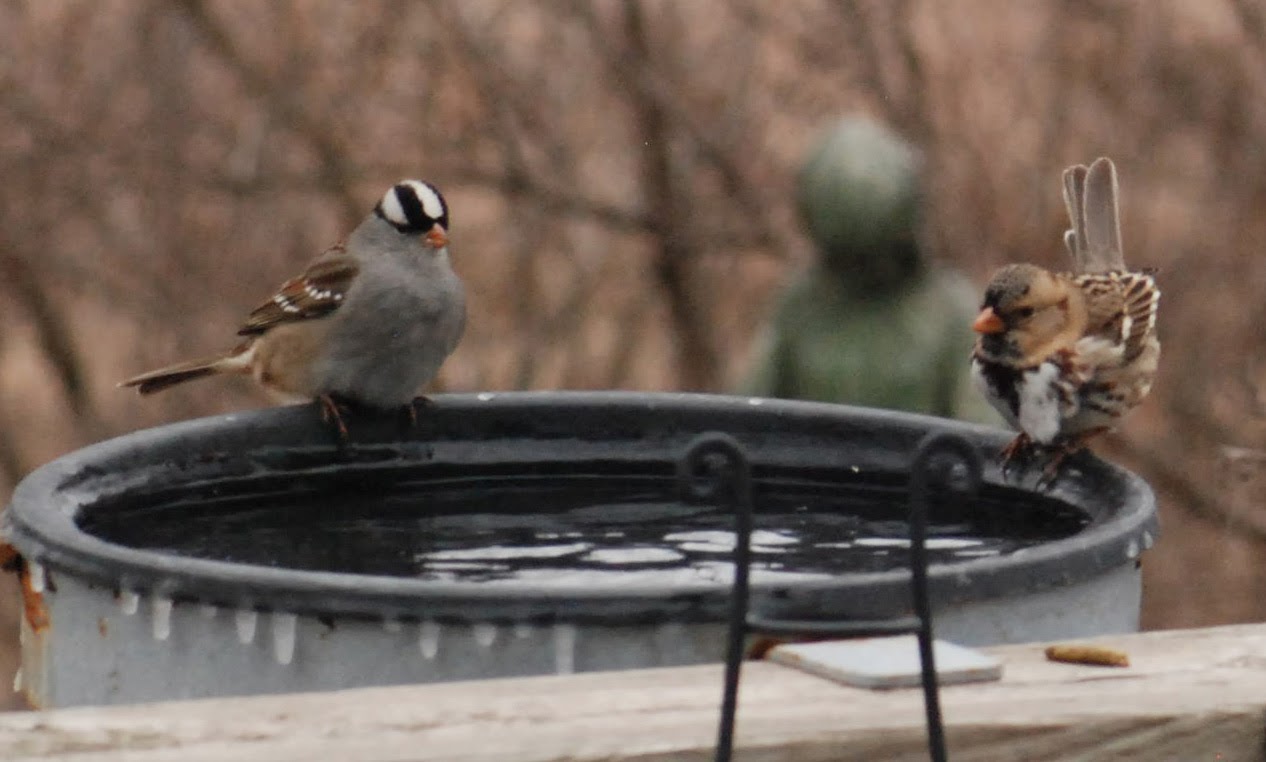 White-crowned sparrows (adult, on the left) are also very common for us, both mature and immature individuals.  As with the Harris sparrows (on right), we generally have 30 or so feeding in the backyard each day. 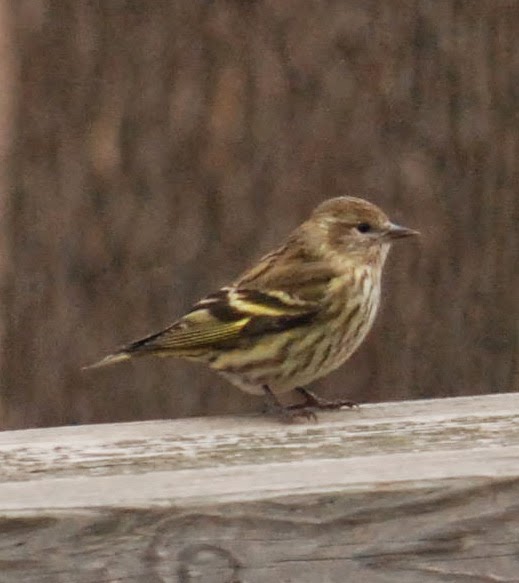 Some years we have pine siskins with us during the winter, and this year appears to be one of those years.  Pine siskins are a northern bird; they only move south when they need better food supplies.  They are rather like goldfinch cousins, eating much the same menu and being about the same size. 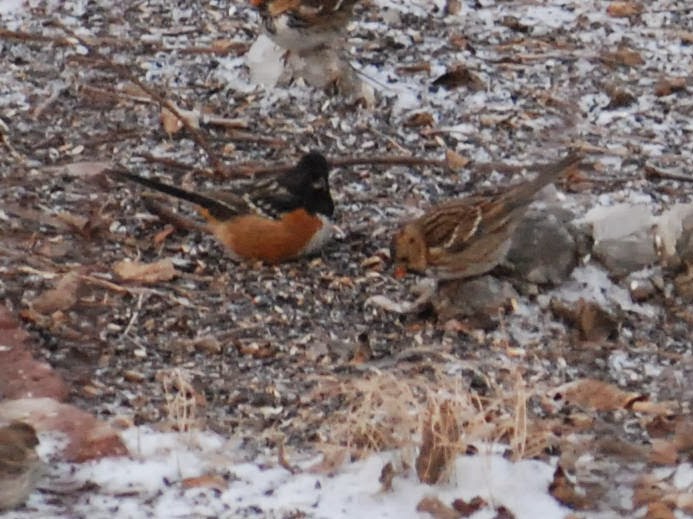 Another winter bird that I don't see all that regularly is the spotted towhee, shown here on the left.  By the way, the "old" name was rufous-sided towhee, which was quite descriptive and somehow more appropriate.  Towhees are a bird I tend to see because I notice that something is throwing up leaf debris everywhere - they are vigorous foragers in the leaf litter and really get their heart and soul into the search! 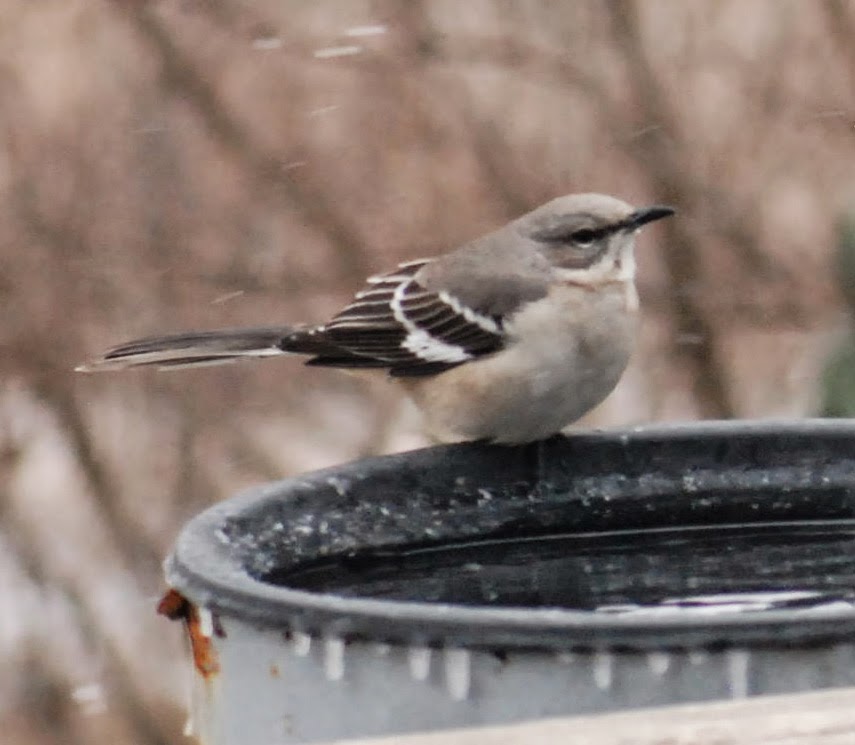 Not all birds come in for seed or suet.  This mockingbird visits several times a day, simply to take a drink of water from one of our heated birdbaths. 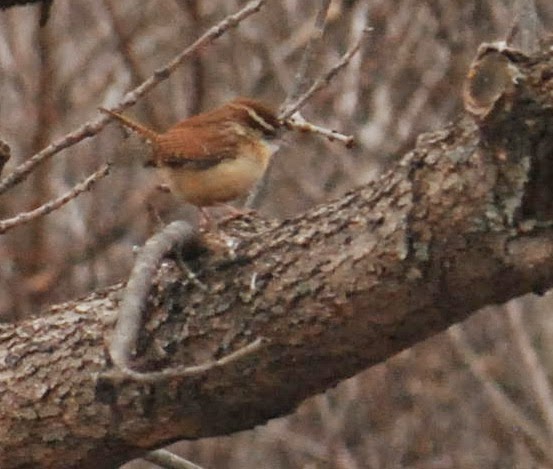 Then there are the cute, rusty Carolina wrens.  I love Carolina wrens, with their jaunty tails and their quick, restless motions.  They have a HUGE voice, which is thankfully quite musical, and a similarly sized persona.  We have a pair that seems to stick around all year, although I don't always see them consistently during the winter.  They will take suet and seed, and they also frequently take a quick sip of water or two.  The picture above is from this morning. 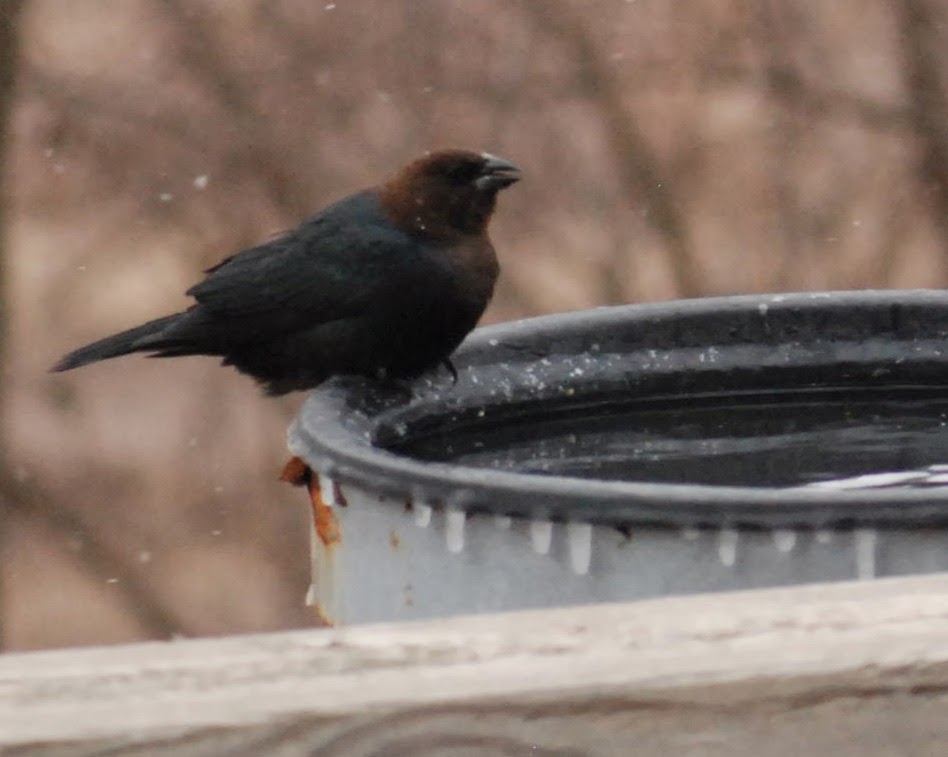 Rather surprisingly for the beginning of January, I have a male and a female brown-headed cowbird hanging around, and half a dozen red-winged blackbirds, too.  Most of the redwings I'm seeing are male, but there is a female or two coming in as well.  The first several years we were here, I don't remember having either of these species hanging on through the winter.  Neither is here now in large numbers, but it still surprises me to have any cowbirds or red-winged blackbirds hanging around, rather than having them headed south with their flockmates. 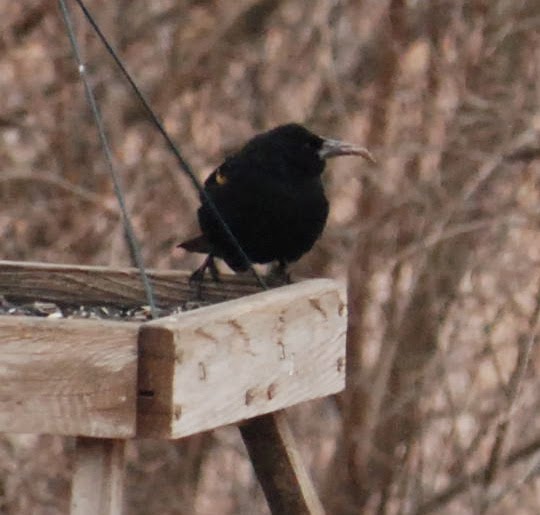 This morning Greg noticed that one of the male redwings has a maloccluded beak, leaving the mandibles to grow way too long.  I've seen worse and this individual appears to be coping just fine, but I have to wonder if a bird like this ever finds a mate and reproduces.

My final bird of the morning, species #20, was a majestic, red-tailed hawk that sailed over the yard and landed in one of the big trees in the draw.  No photo of this one, I'm afraid - I didn't think fast enough.   Each winter we have a pair of redtails in the area, and each year I hope that they'll nest in our yard, but so far they haven't.  Hope springs eternal...I'm keeping my fingers crossed.

So that's the start of my 2015 yard bird list!  Do you put out feeders?  What birds do you notice foraging in and around your gardens?  Just think of all the dormant insects they are eating - and all the fertilizer they are depositing!  What are you waiting for?!

OK, I took the bait and started my list. Also bought another "squirrel-proof" feeder for sunflower seeds and have it filled and open for business. Binoculars and bird books are within reach. Will be interested to see if the safflower seed gets any action tomorrow.

I'll be curious to know what you see.

I have found that my birds don't seem to like safflower seed. Other people swear by them - say their birds love it and it leaves no shell. I'll be curious to know if yours gets any action too.

I always have safflower out, cardinals, finches, sparrows love it. Had Common Flicker doing acrobatic maneuvers on perches to get some a couple of days ago. Most important, squirrels leave it alone. Just as I came back from a walk in sunshine at noon I caught a glimpse of a solitary Cedar Waxwing, don't see them often, are usually in groups. This one was at the birdbath drinking.

That is fascinating - my birds just ignore the safflower and it builds up in the feeders, since I feed a mix with a small percentage of it.

Love cedar waxwings - and I always think that a flicker is a good "catch", as they are less likely, in my experience, to be feeder addicts than many of the other birds.

I don't have cedar waxwings yet this year, but we did hear a barn owl last night!!! That's a yard first for us. I'm up to 26 species, as of this morning.

I have been participating in Project Feeder Watch for several years now (but not this year since I followed the birds South!). They always send me a calendar and I keep all of them posted and record when I see birds. It is fascinating that many birds migrate to the DAY according to my sightings in the garden. I love comparing the years.

Kathy, I love FeederWatch and have participated, off and on, for many, many years. I'm also taking a break this year, simply because it's a busy year for us and I tend to get pretty obsessive about being sure I'm watching enough to get the highest number of each species of bird each day. When I'm rabidly recounting Harris and white-crowned sparrows to see if I'm really seeing 50 or 52 of one of the species, I think maybe I've gone a little overboard. LOL!