Paraphrasing Robert Frost's "Good fences make good neighbors" quote seemed appropriate for today's work in the garden. Greg had made a strong line around the beds with the edger this weekend, so I've been using that line to pull out the extra grass and neaten the border edges.

It's funny, but it's taken me almost all of my life to recognize the importance of neat edges in a garden. We all have our points of rebellion, and for some reason one of mine revolves around keeping things neat. In my wise old age, though, I've come to realize that if I keep the edges neat, the beds and lawn can be downright weedy and/or overgrown and the garden will still look good...especially to the untrained eye.

Speaking of weedy and overgrown, another basic garden chore that I rebelled against for years was weeding. Justifying my reluctance to pull out unwanted plants under the umbrella of "biodiversity is good for any biological system," I kept wondering why my garden plants always looked so stunted and my vegetables produced so poorly. Call me stubborn. Call me stupid. I have learned better, though! It just took me longer than most.
Posted by Gaia Gardener: at 6:11 PM 2 comments:

May Days in the Garden 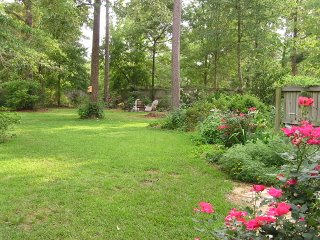 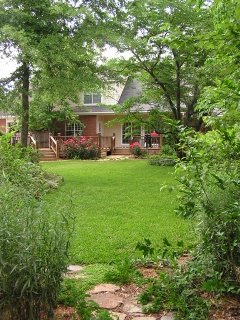 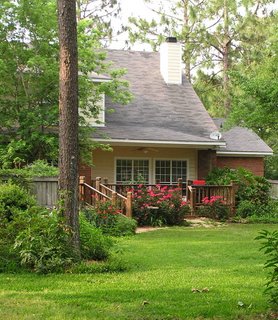 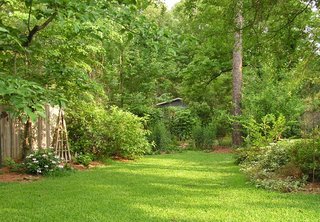 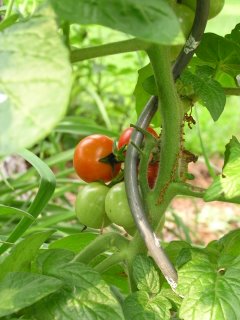 Suddenly it seems like summer is here. As the photo shows, we've had our first tomatoes ripen...and boy, did they taste great! Since the dogs have been "harvesting" the standard tomatoes on the deck as they get to about (green) golf ball size, our first ripe tomatoes were cherry tomatoes planted on the edge of the butterfly garden. The bush is loaded, so we're looking forward to several weeks of fresh tomato flavor.

Along with the cherry tomatoes, we've been able to snag a couple ripe blueberries before the birds and/or squirrels got to them. And I found a patch of big, ripe, sweet-tart dewberries hiding in a corner. I need to pull the dewberry vines out...but I decided I could wait until the vines quit fruiting!

I'm not really ready for summer to be here, but with sweet bribes like these, I'm getting more resigned every day.
Posted by Gaia Gardener: at 6:45 PM 1 comment: 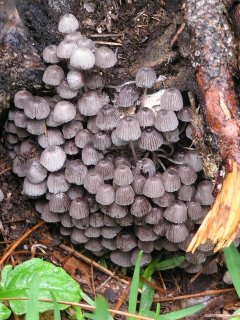 During a slight break in the rain this morning, I ventured outside to do my daily walk-about. Imagine my delight when I came upon this dense tent-village of mushrooms sprouting on a small logpile. This was only one of several concentrations on the pile, all of which carpenter ants were busily examining.

Luckily I braved the gray skies and light rain to take a few photos because when I went back this evening, after the sun had gently come out, almost all of these dainty little umbrellas had melted into a dark charcoal-gray mass of threadlike carcasses.

Note the leaf blades in the bottom of the photo to give you a sense of how small and tightly packed these mushrooms were during their brief heyday.


As I continued around the yard, I noticed a rather interesting anomaly: most of my Salvia guaranitica (anise sage) had several foliage tips hanging down, severed almost completely through the stem. I could see no signs of insects around, but it reminded me of cutworm damage on young seedlings, except that it was a foot or more off the ground. After doing some internet and book research, I've decided that the culprit is climbing cutworms, but I still find it unusual. Salvia is normally a plant used to deter insects from a garden, but these plants - and I have at least 5 of two different cultivars, scattered around the yard - were the only ones showing damage. So they were acting more as a trap crop than as a deterrent.

My last discovery of the day was the realization that my two Chain Ferns or Woodwardias (one of which was totally deciduous this winter, while the other retained a couple anemic fronds) are actually two different species. I'd assumed that they were both Oriental Chain Fern (Woodwardia orientalis), which is what we sell at the Plant Sale. Closer inspection revealed some significant differences in the fronds. When I used my new fern guide, a birthday gift from Jess, I realized that the deciduous one was actually Netted Chain Fern (Woodwardia areolata). Best of all, the Netted Chain Fern is native!

Another daily walk-about and 3 new discoveries, just in my modest yard. It never ceases to amaze me how much changes from day to day.
Posted by Gaia Gardener: at 8:13 PM 2 comments:

It's like a parade of good friends as I walk around and work in my garden: 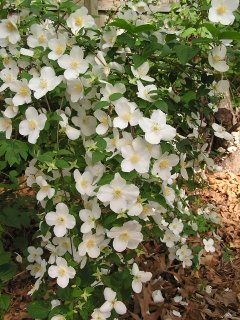 In early April, there was the English dogwood (aka mockorange) that Edna gave me a start of about 4 years ago.... 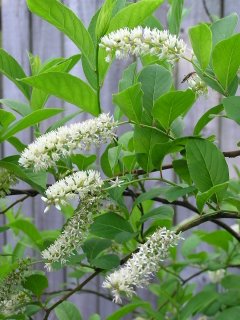 And in late April, there was the Virginia sweetspire, another gift from Edna, bursting into bloom as it gracefully arched over the pathway.

All spring in the fern garden, I have been enjoying the contrast of the Labrador violet (from Allan Armitage on the Atlanta MBG trip) and the dainty upright leaves of the dwarf iris from Patty. And then there's the commanding presence of the Confederate rose from Xanthy at the end of the garden path near my woodland nymph. 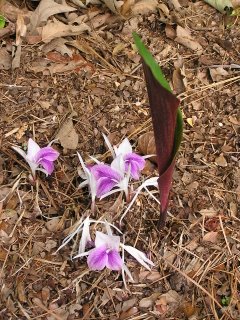 Several weeks ago, the first blooms of Miss Lily's peacock ginger, Kaempferia rotunda, peaked up into the light. The contrast of the delicate flowers against the sturdy mulch is a daily paradox, while the emerging leaves add yet another element of excitement to the garden. 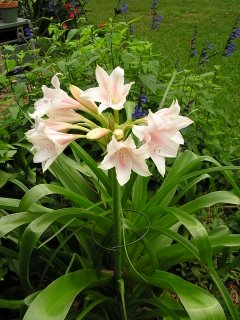 Currently, besides the peacock ginger, I'm enjoying the blooms on Shelley's cleome (somehow I've ended up with pure white blooms!) and on Patty's crinum.

My gardening has been mundane lately...some weeding, going back and cleaning out the Artemesia roots, pulling grass runners away from the edge of beds, dead-heading, a little minor transplanting.... The list is uninspiring, but the tasks are essential to keeping the garden functioning as a garden rather than degenerating into an overgrown morass of undifferentiated green. It's taken me years to learn that these tasks can't be skimped...ESPECIALLY if I want to keep gardening organically.

A year of seed; seven years of weed.

And, actually, now that I've learned to accept that I really do need to keep up with these tasks, I find the work rather relaxing. Each morning that I'm going to garden, I take my cup of coffee and meander the yard, looking to see what needs to be done. By the time I finish the caffeine jolt, I'm raring to get started.

Wendell Berry's poem, "The Farm" (from 1991, as published in A Timbered Choir, p.146-147), speaks to me again, this time about the importance of these ongoing small adjustments to the identity of the place I'm "farming":

And so you make the farm,
And so you disappear
Into your days, your days
Into the ground. Before
You start each day, the place
Is as it is, and at
The day's end, it is as
It is, a little changed
By work, but still itself,
Having included you
And everything you've done.
And it is who you are,
And you are what it is.
You will work many days
No one will ever see;
Their record is the place.
Posted by Gaia Gardener: at 4:17 PM 1 comment:

The Half Century Fountain 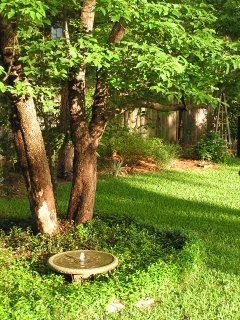 Greg bought this beautiful bird bath/fountain in celebration of my half century mark this year! We installed it about 10 days ago, finding the perfect spot just off the deck at the base of the big old dogwood. I can see it from the kitchen door, as well as from every window that overlooks the backyard.

I absolutely love its relaxing, burbling presence and am looking forward to the birds that it will attract.
Posted by Gaia Gardener: at 6:37 PM 1 comment: 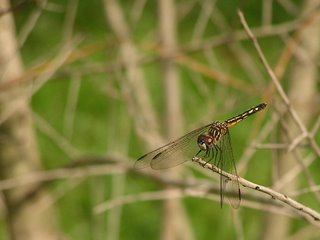 Let me know what you think!
Posted by Gaia Gardener: at 6:07 PM 3 comments: