Another Worry for Cicadas: Cedar Beetles

My dogs absolutely love to munch cicadas and have been known to catch them in mid-air.  If they find one on the ground, they'll often hold it in their mouth for a little bit to get it to buzz before they chomp down and eat it.  A canine "Fizzy", I guess.

Then there are more "normal" predators like birds and, especially, the huge wasps known as cicada killers.  Female cicada killers hunt down a cicada, sting it to paralyze it (but keep it alive), drag it back to their nest in the ground, carry it below ground, lay an egg on it and seal the brood cell off.  When the egg hatches, the larval wasp eats out the paralyzed, living cicada, pupates, and emerges the next year to repeat the cycle.  An effective population control mechanism for cicadas, although it's extremely unsettling to think about.

I suspect that moles eat a fair number of cicada nymphs, too, as the nymphs feed and mature underground.

Now, I've learned about another animal that feasts on cicadas, specifically on the nymphs while they are still underground - the cedar beetle, Sandalus niger, also descriptively known as the cicada parasite beetle.  I've been observing these large beetles all around the yard over the last few days.  Most often, I'm seeing them on honeylocust trees. 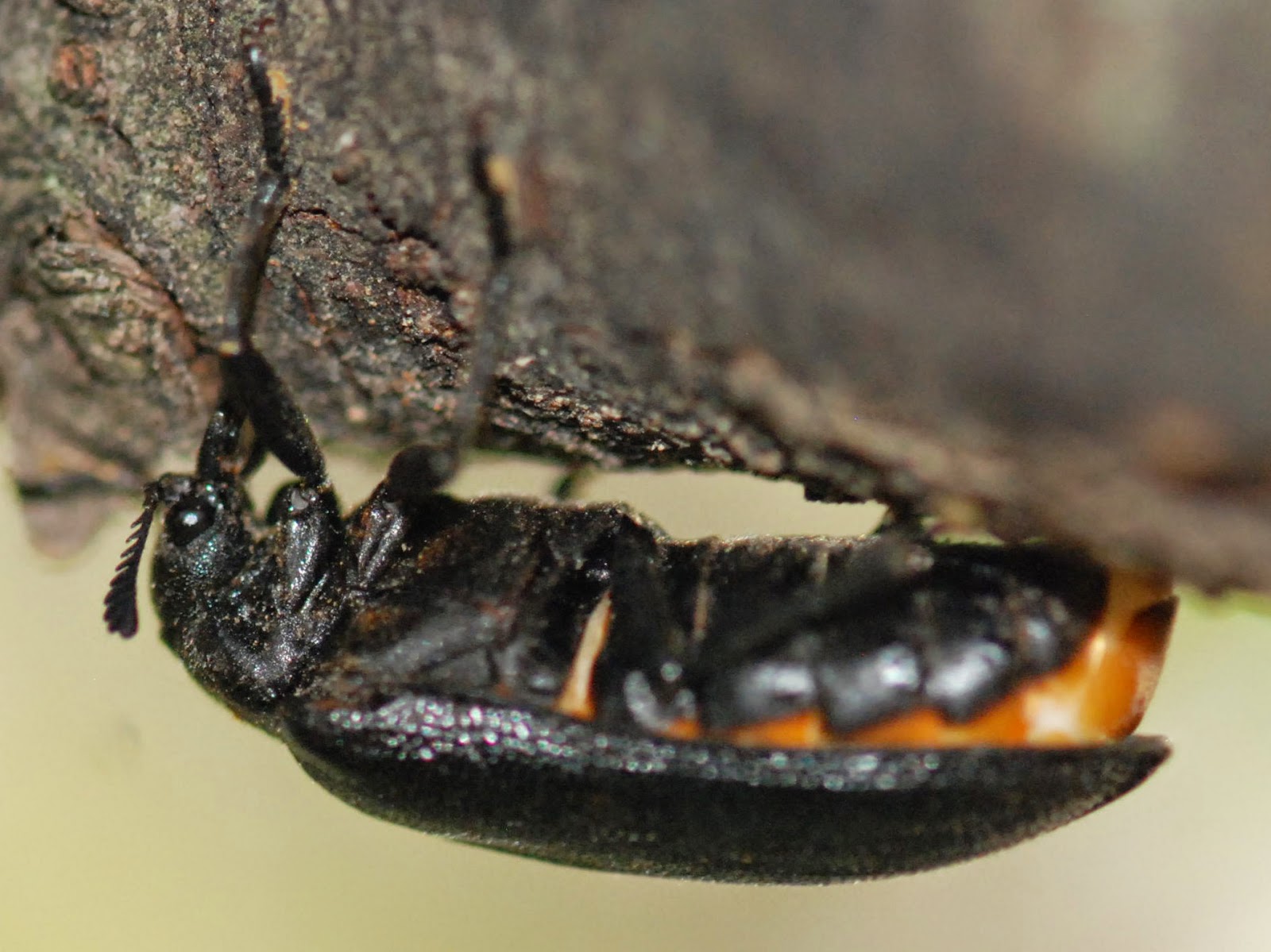 These are fairly large beetles - many are close to an inch in length.  I first noticed one when I saw a big brown beetle being eating by 2 wheelbugs.  I've never seen TWO wheelbugs eating the same beetle before!  I took photos and tried to identify the beetle, but I couldn't quite make it out.  It looked somewhat like a longhorn beetle, but I didn't see long "horns" (antennae) on it. 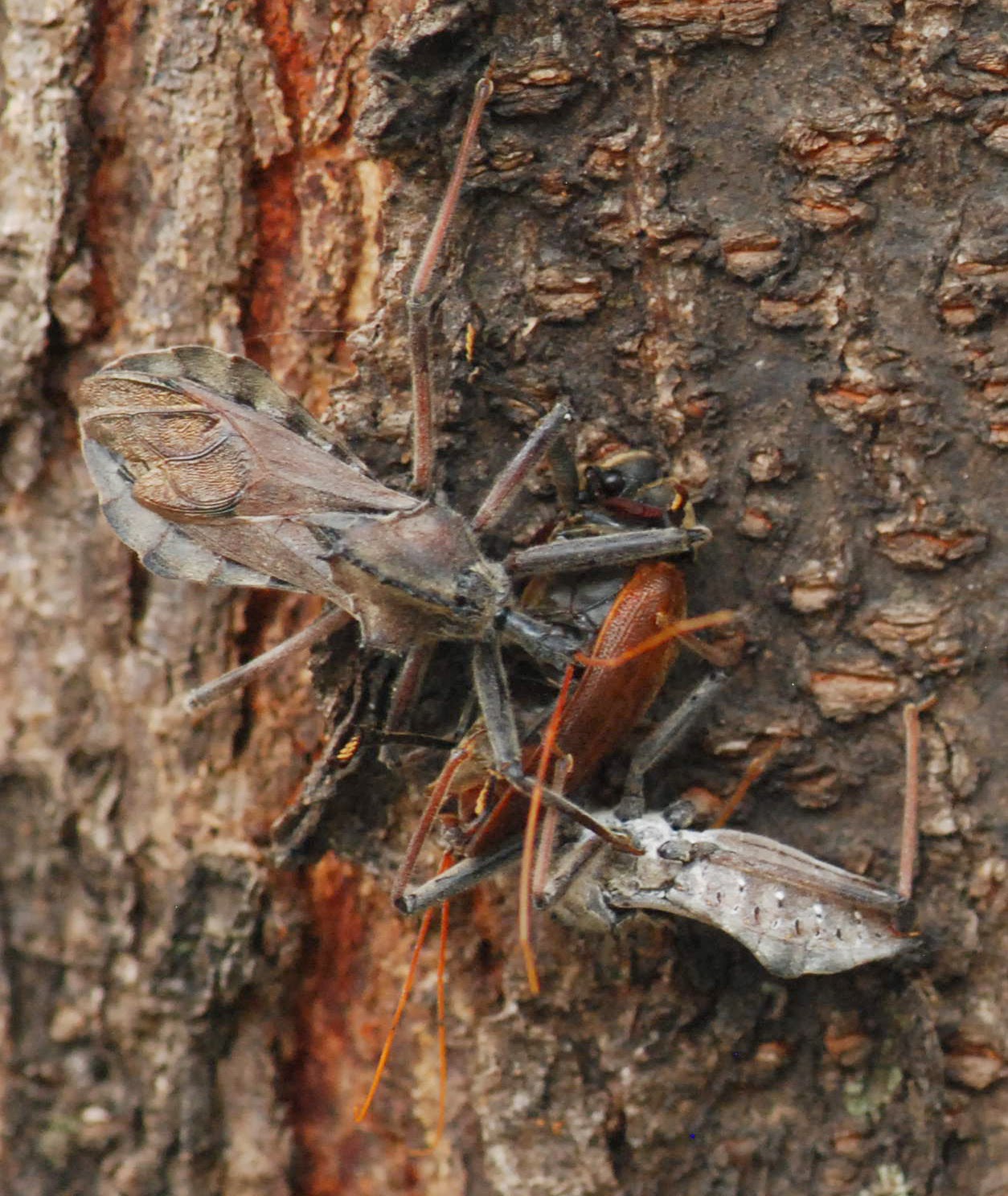 While I was photographing this interesting vignette, Greg called me over to a nearby lacebark elm, saying that he'd just seen a big black beetle fly into it.  He showed me where she had landed and I took several photos of her;  she appeared to be laying eggs on the underside of a dead limb. 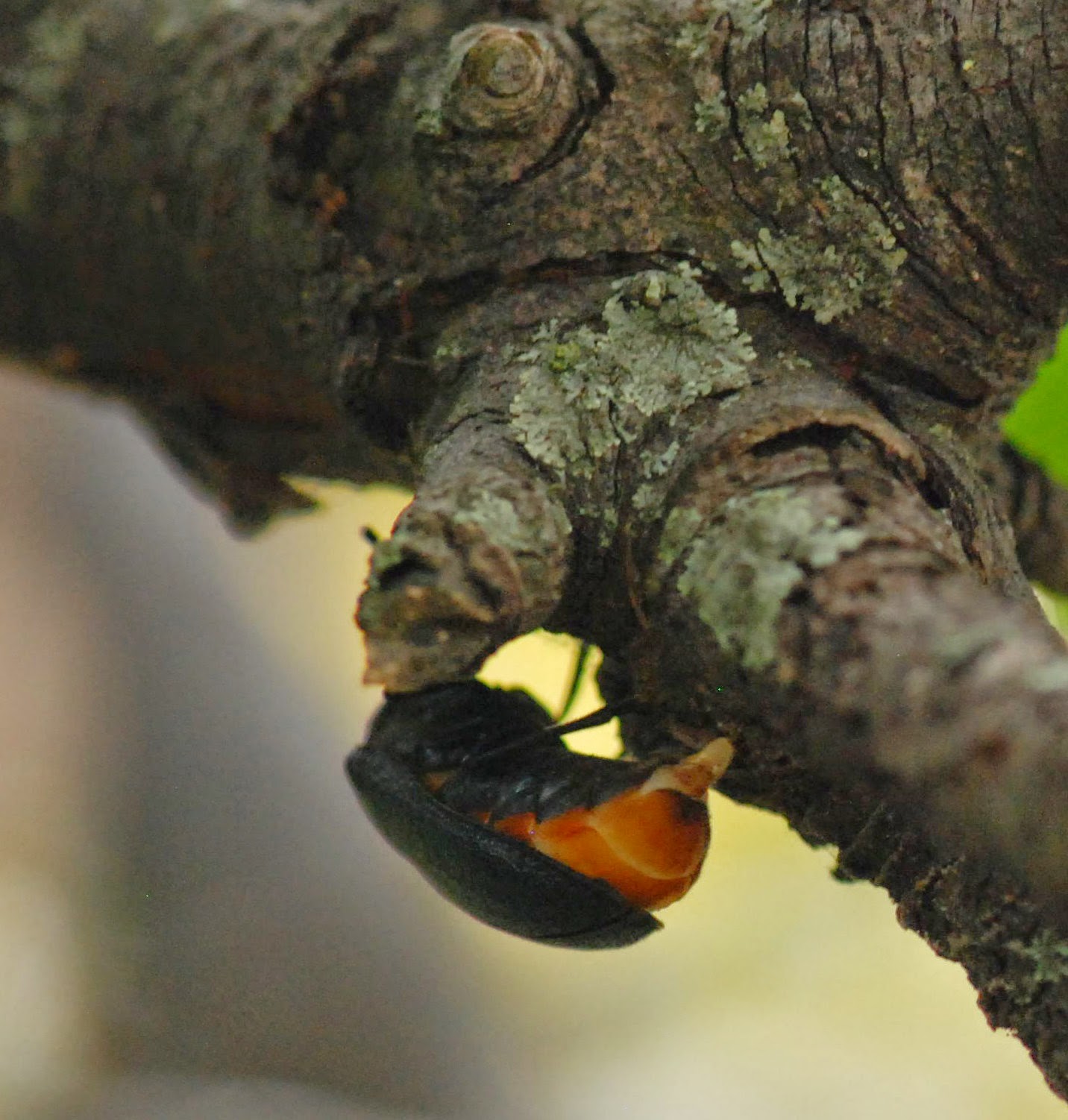 I started to go back to taking photos of pollinators on asters, when I felt something on my shoulder.  Looking down, it was a large black beetle with one of the elytra (thickened wing covers) missing.  I brushed her to the ground, where I photographed her, wondering how she had lost her elytra.  Then I picked her up and put her in the elm tree, thinking she probably got interrupted during egg laying. 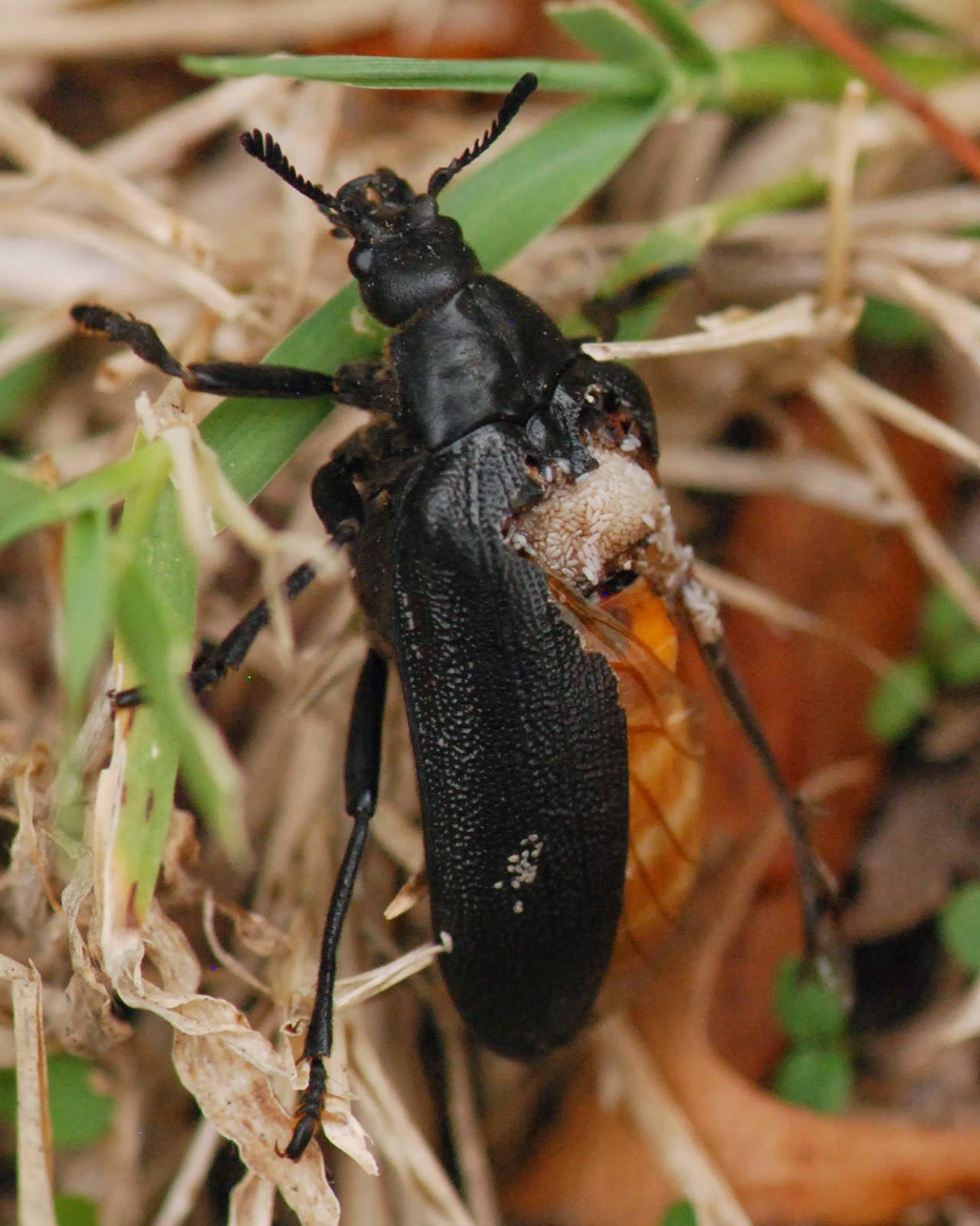 Only when I edited the photographs this evening did I notice that all the white "innards" showing were actually larvae(?) or pupae(?) of some other insect that were massed inside her.  I have no idea what they are...but I'm submitting the photo to BugGuide to see if anyone there can help identify what was going on with her.  (Parasites eating parasites.  Sometimes the natural world is really complex in its creepiness.)  Did the larvae have anything to do with how she lost her wing cover?  I have no idea. 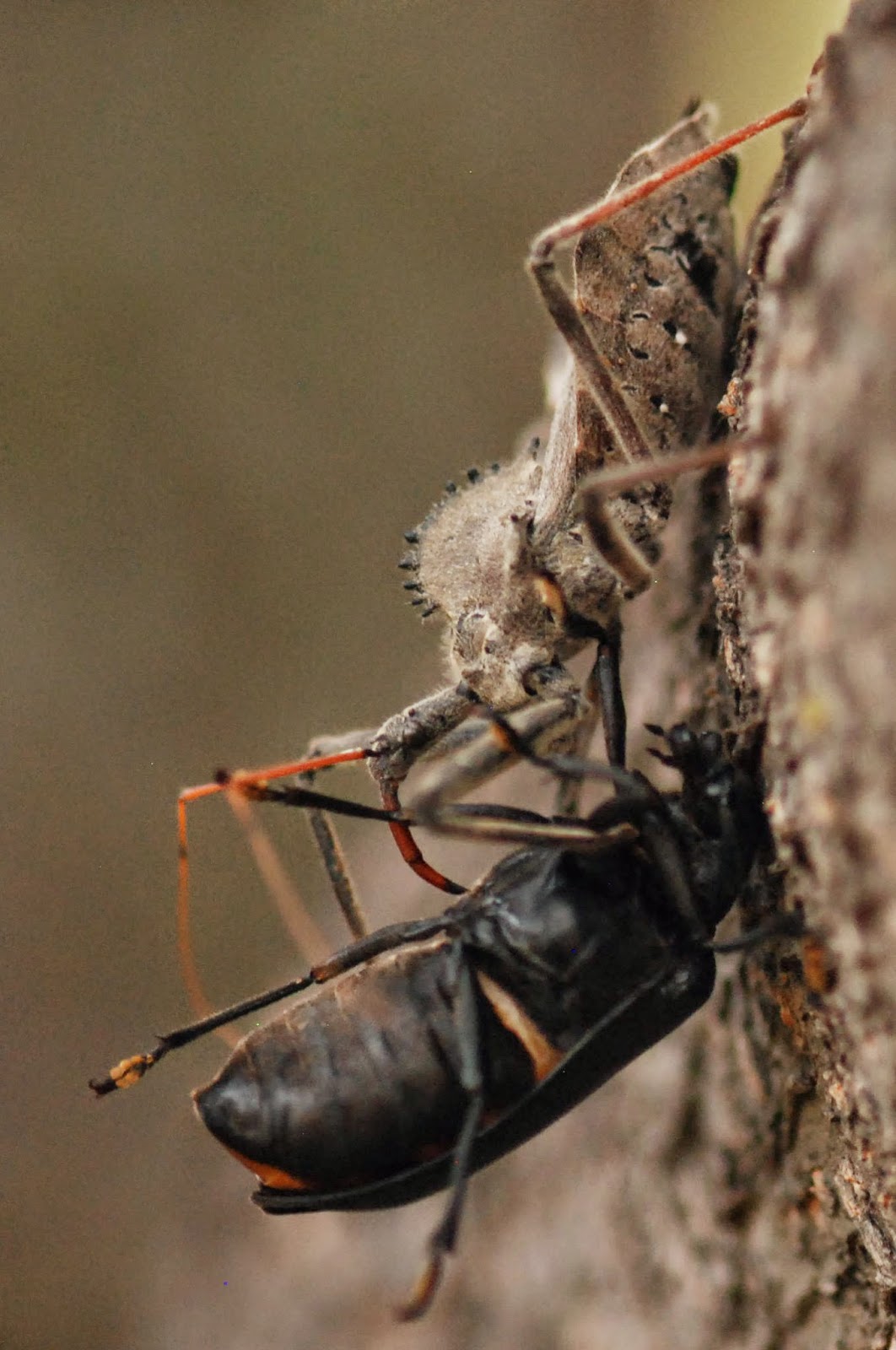 Next, I noticed another, similar looking beetle being eaten by a wheelbug on a nearby honeylocust trunk.  As I stood and took photos, I heard and felt yet another big beetle - the 5th one - fly by my head.  It was a male, judging by its smaller size and more slender body, and it landed on the tree trunk right in front of me and starting searching all around.  Its antennae were really interesting, especially when the beetle fanned them all the way out. 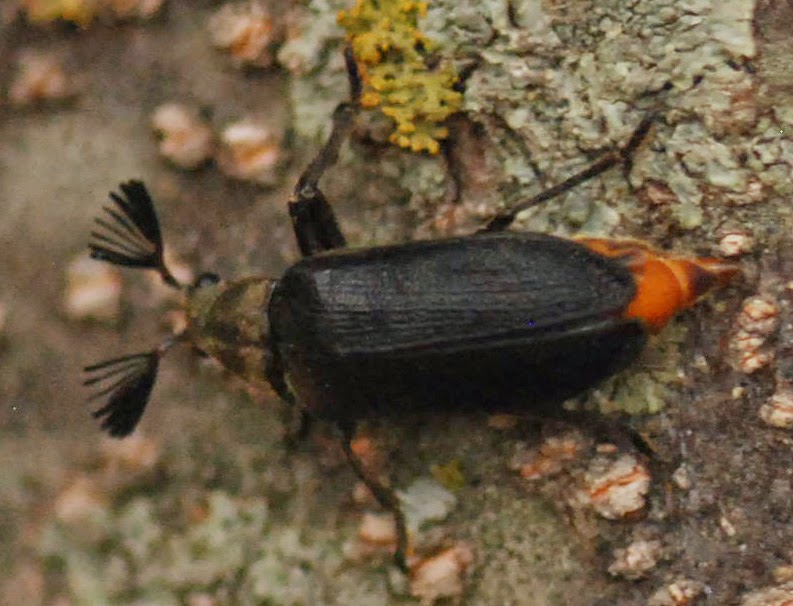 While all of these beetles were grabbing my attention, I was also hearing a clicking noise that sounded very much like the rhythmic pattern of a field sparrow, which is often likened to the sound of a bouncing ball.  This noise, however, was more "insect-like" than a bird call, if there is such a thing.  I never did find out what was creating the sound, but I don't recall having heard it before and I wonder if it was some sort of mating call between the cedar beetles.

Before I went in for the evening, I took several more photos of each of the different beetles I'd observed, and  I also found a 6th beetle on the underside of a honeylocust branch. This was another female, based on the size and shape, but I didn't get any clear photos of her.

Looking through Insects in Kansas, by Glenn A. Salsbury and Stephan C. White, I found the tentative identification of my beetles, which I confirmed on BugGuide.net.   They were all the same species, Sandalus niger.  Insects in Kansas had noted that males often had blackish-brown wing-covers, rather than black, and on BugGuide, I saw the difference in antennae between the males and females.  There wasn't a lot of information given about the species on its information page at BugGuide, but it was noted that the adult beetles are very short-lived.

I've gone back and picked up the "empty" beetles discarded by the wheelbugs after they were through eating them so that I could examine them more closely, plus I've been able to find a couple more dead specimens.  Sunday, October 19th, was the only day that I saw so many living individuals, although I've seen one or two more each day since then.  I have not heard the clicking noise again.

I have seen one more instance where two wheelbugs were eating the same cedar beetle.  Do wheelbugs do this with any large insect, or is it only with cedar beetles?  I'll be keeping my eyes open to see what I observe in the future.

Isn't the complexity of life fascinating?!

Surprise! - A Gray Treefrog in the Garden

We've been away in Boston and Vermont for the past 10 days, so a lot has happened in the garden while we've been gone.  The aromatic asters were just beginning to open as we left and I was afraid that I would miss them, but I didn't need to worry.  They are still in full and glorious bloom!

Greg and I did a walkabout yesterday and I took a huge number of photos, most of which still need to be sorted and studied, edited and identified before I can think about sharing any of them - but I have a couple photos showing one surprise visitor that were easy to quickly focus on and that I thought you might enjoy....

After our walkabout, Greg decided to add some old straw to one of the vegetable garden beds for the winter.  As he picked up the decomposing bale to redistribute it, an amphibian jumped out.  Greg's first impulse was that it was a toad, based on location, general size, and general lack of shine to its skin.  It looked different than most of our toads, though, so he called me over to take a look. 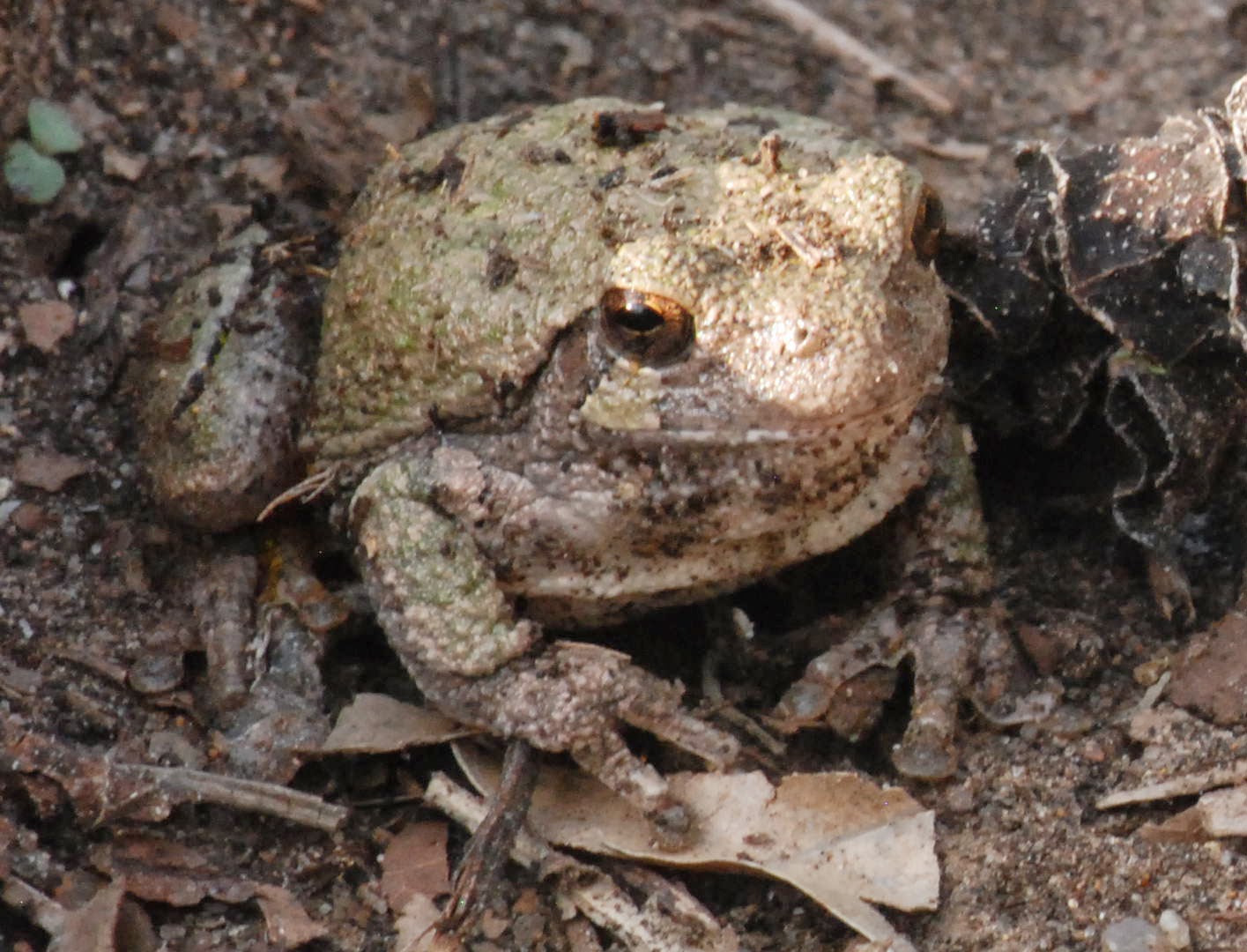 The animal was rather small and it wasn't warty enough for a toad, in my mind,  plus the shape was wrong, so I started thinking about the various kinds of frogs that it might be.  Meanwhile, of course, I took as many photos as I could without disturbing the animal or trying to pick it up.  When it hopped, it flashed the most vivid bright yellow on the lining of its hind legs...but that yellow was very hard to see when it was sitting still.  That HAD to be diagnostic. 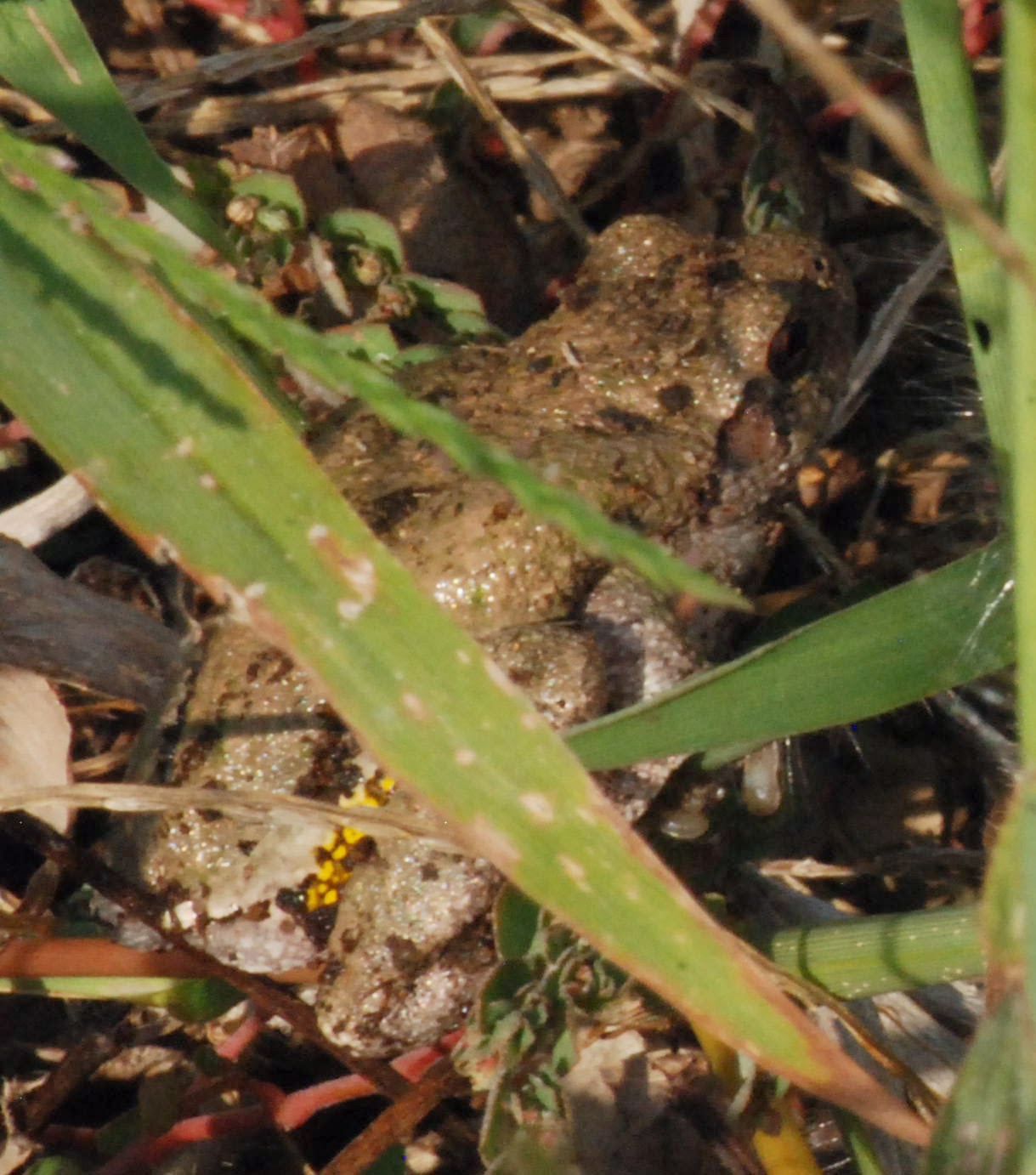 Over dinner, I opened my copy of Amphibians, Reptiles, and Turtles in Kansas, by Joseph T. Collins, et al., and turned almost immediately to the page talking about Cope's Gray Treefrog (Hyla chrysoscelis) and Eastern Gray Treefrog (Hyla versicolor).  The two species are apparently only distinguishable from each other based on their chromosome number or the size of their blood cells, so I am simply calling this a Gray Treefrog (Hyla sp.).  Even based on the general natural history given, I'm perplexed - Cope's is said to be more arboreal than the Eastern, but to need less humidity in its environment.  Since we are at the absolute western end of this pair of species' range (and thus in the driest part of their range), but the individual was found under an old hay bale in the garden, I'm still split between the 2 options.

As of the writing of Amphibians, Reptiles, and Turtles in Kansas, which was copyrighted in 2010, the Gray Treefrog species complex was apparently expanding its range westward "along riparian corridors".  The species occurrence map shown in the book does not show any occurrences documented in Sedgwick County, but there are a few in the counties generally south and east of us.  It would seem that our individual may be one of the "pioneer" Gray Treefrogs, expanding their range west. So we may have a new county record! 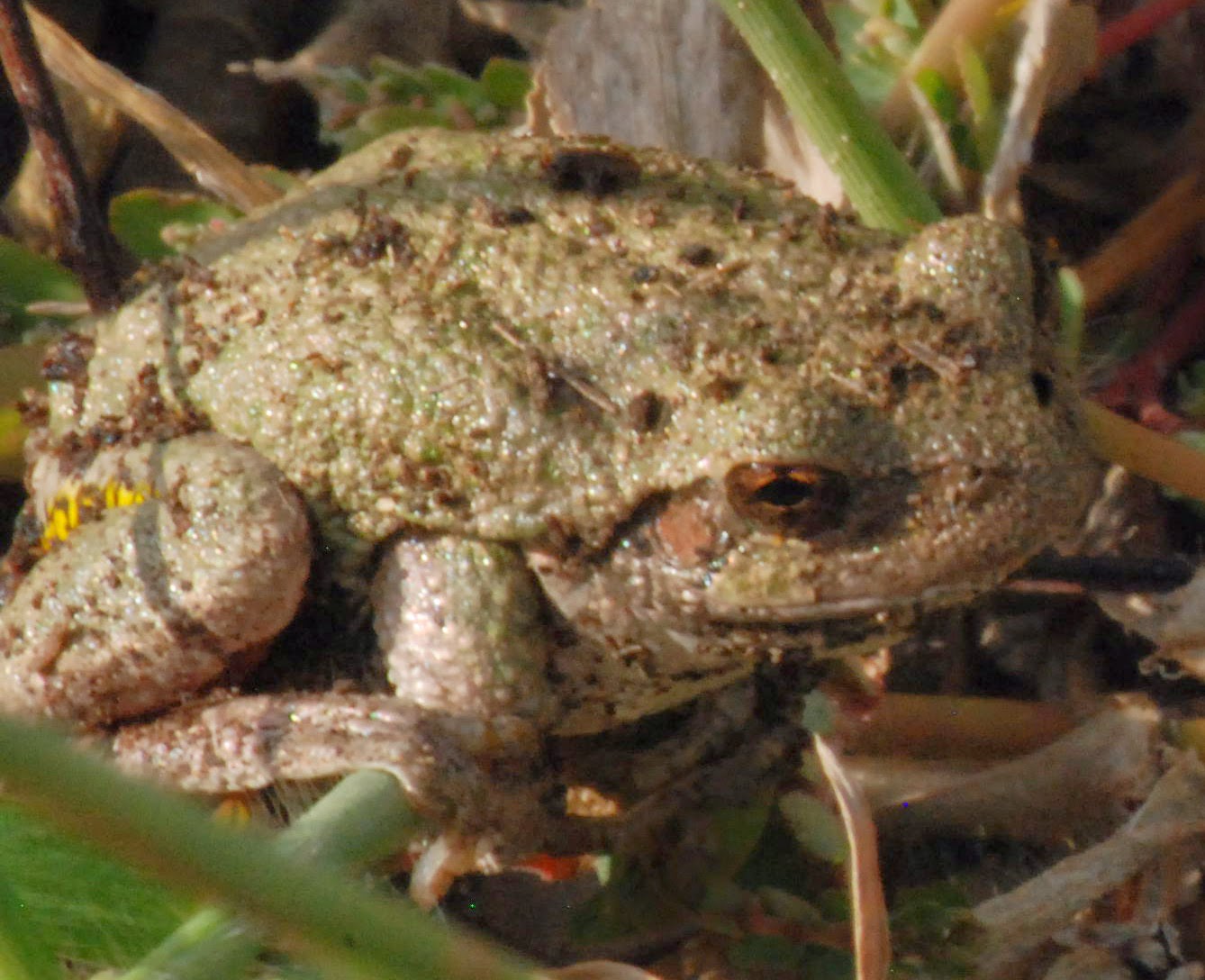 This is the sort of find that brightens my week and makes me feel that we're on the right track in our land management decisions.
Posted by Gaia Gardener: at 10:20 AM 3 comments: