A Tired Time of Year in the Garden: Time to "Tolerate the Uglies"

As I look around my garden these days, there are definitely places where it's starting to look worn out and ratty. 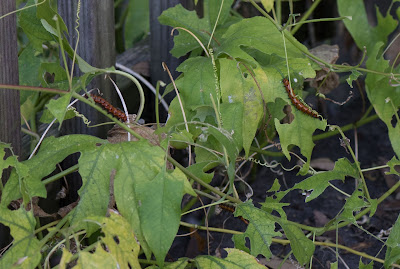 For example, what's the end result of this sight, on August 25th? 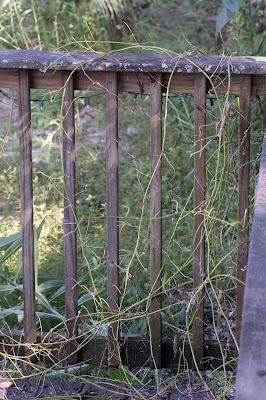 This sight on September 9th!  And LOTS of gulf fritillary butterflies gracing our yard, too.  Just recently a seemingly unpenetrable wall of green, the passion vine (Passiflora incarnata) is literally skeletal now.  All of its leaves - literally ALL of them - have been eaten by gulf fritillary caterpillars (Agraulis vanillae), leaving nothing but awkward stems with the remnants of a few fruits hanging on.  I'm not worried, though.  The passion vine will be back next spring, as full and pretty as ever.

Also, did you notice?  The leaves of the vines were beginning to turn yellow by the end of August anyway.  They weren't going to last much longer even if the caterpillars hadn't been eating them. 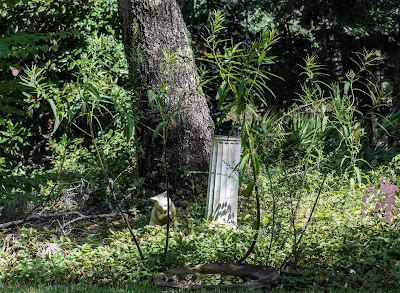 The victim of twin onslaughts - monarch caterpillars and advancing age, the swamp milkweed (Asclepias incarnata) is looking rather pathetic too.  It's a battle to see whether the caterpillars will eat the leaves first or whether they'll turn yellow and fall off from the bottom up.  (The tall, leggy plants in the photo above are the swamp milkweed, planted just behind the birdbath basin on the ground.)  It's the legginess and ugliness of this stage of their life cycle that encourages me to generally plant swamp milkweed in the back of the border, hopefully behind some "fluffy" lower plants like red sage (Salvia coccinea) or short species of asters.  If you look closely at the left side of the photo, however, you can see that the monarchs aren't upset by the state of the milkweed at all. 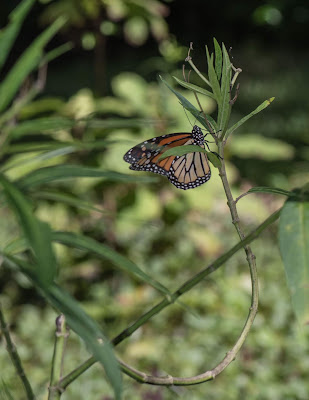 There are still many flying in the yard, with females frequently seen laying eggs here and there - even on "ugly" plants. 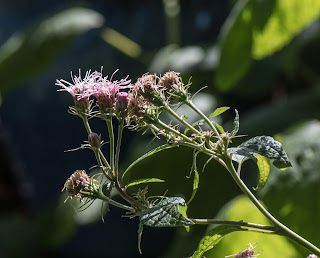 Flyr's nemesis (Brickellia cordifolia) is just about done blooming, so its small, cotton candy pink pom-poms of flowers are fading into grayish lavender mush.  The leaves still look good, but the stalks have sprawled everywhere, thanks to the weight of all those beautiful blossoms over the last couple weeks. 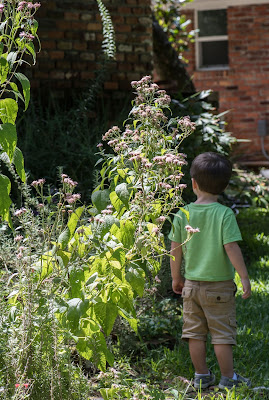 I've got these few stalks held up with stakes because they were lying flat on the lawn.  Our 3 year old grandson gives a good sense of scale against these shortest of the Flyr's nemesis stalks.  Despite the waning number of blooms, the monarchs, gulf fritillaries, and little bees are all still enjoying the Flyr's nemesis immensely. 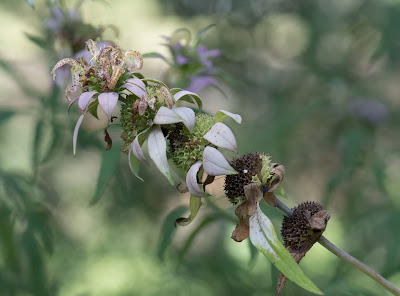 Declining in the same way they grew, from the bottom up, the Dr. Seuss flowers of spotted horsemint (Monarda punctata) are past their prime as well.  There are still individual flowers in the upper bloom clusters, but the bottom clusters are turning brown and drying out.  Like the Flyr's nemesis, the stems have sprawled from the weight of bountiful blossoms. 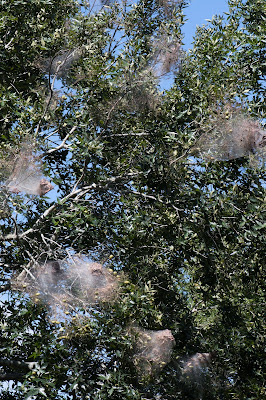 Looking up into the trees, numerous nests of fall webworms (Hyphantria cunea) pockmark the ends of the branches of the pignut hickories (Carya glabra).  I've noticed an increased number of birds like bluejays up in the canopy since the webworm nests appeared, so I'm guessing that the birds are having quite a nice, seasonal, tree top feast up there. 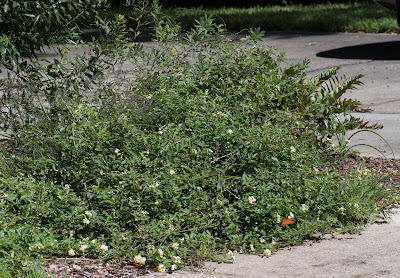 In the front gardens, even the tidy green mounds of the trailing pineland lantana (Lantana depressa) are showing signs of decline, although thankfully you have to look fairly closely to see them. 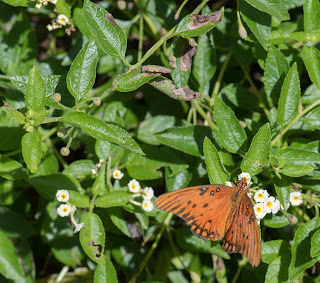 Many leaves have been used as caterpillar food by some sort of leaf rollers this summer and they have become gray ghosts of themselves.  Empty flower stalks are numerous now, too, although the blossoms still attract most of the attention, especially from a distance.  Luckily, again, the butterflies, skippers, and other creatures don't seem to mind at all.

When I worked the phone line for the Master Gardener office, we'd always get concerned calls at this time of year, "My plant leaves are looking so sick.  What should I spray on them?"

My response then was the same as it is internally to myself now, "It's the end of summer.  The leaves have been working hard all summer and they are tired and worn out.  It's almost time for them to fall, where they will continue working to make the garden healthier as they decompose into rich topsoil.  Don't spray anything.  This is all just part of the natural cycle of life.  Nothing is wrong at all."

Or, in other words, it's the time of year to remind ourselves to "tolerate the uglies" as the seasons begin to change yet again, moving us into the release of fall and the quiet peace of winter.  This, too, shall pass.

Dollarweed - What Good Is It? 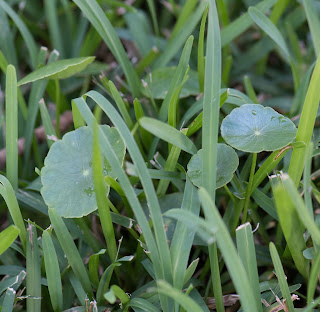 Talk about a plant that everybody loves to hate!  Dollarweed (Hydrocotyle sp.) is a native plant, also known as pennywort, that loves to grow in the same conditions that also favor lawn grass:  bright sun, plentiful water, low surrounding vegetation.  It's hardy and it requires essentially no care.  With its single, round, silver dollar sized leaves, it is easily recognizable and it boldly stands out in a mass of linear grass leaves.  As such, dollarweed has gained great notoriety - heaven forbid that a non-grass plant disturb the carpet-like splendor of a lawn!

If you look at dollarweed simply as a plant, however, it's really rather attractive.  The bright, shiny green leaves reflect sunlight and are held aloft on pliable, sturdy stems. 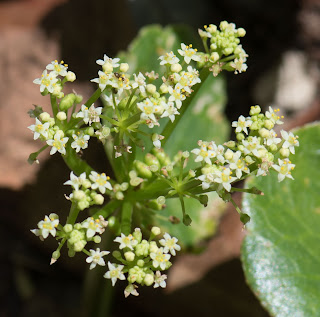 The flowers are umbels of white that are not glamorous, perhaps, but that are quite attractive in a quiet, lacy way. 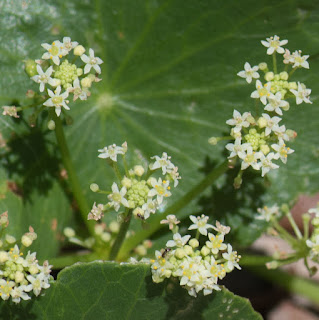 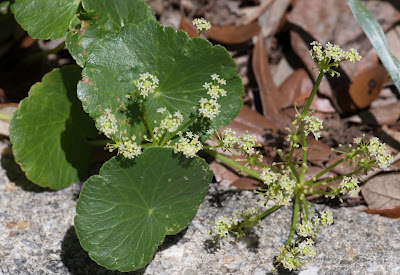 This photo shows how the umbels open up as they get older. 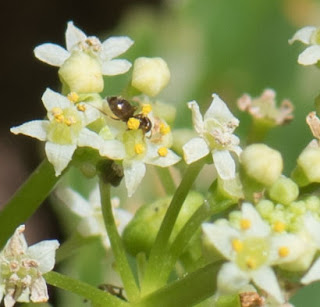 This morning, as I took photos, the insects I found on these flowers in a garden bed were tiny ants.  Truthfully, I didn't even see the ants until I opened the photos up on my computer screen.

Perhaps dollarweed's biggest flaw as a garden plant is that it doesn't tend to form solid mats but, instead, prefers to interweave through other plants, refusing to stay neatly in one place.  It's also difficult to completely eradicate from a lawn or flower bed with underground rhizomes that break off readily at each node. 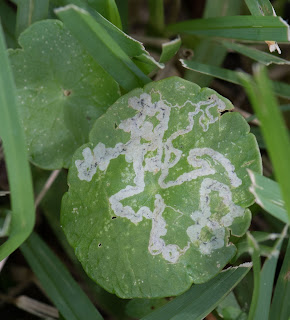 Because it's a native plant, I've wondered how dollarweed fits into the ecosystem here, but I haven't taken the time to really study it.  All I've noticed on the plant in my yard is an occasional leaf miner.   I'm not sure what insect is doing this particular leaf mining - the larva of a fly? of a moth? of a sawfly? of a beetle?  Any of these different types on insects have certain species whose larvae are leaf miners, feeding on the leaf tissue between the upper and lower surfaces of leaves.

A couple weeks ago, I noticed a closeup photo of the bloom of dollarweed on Instagram.   Responding to the photo, which was identified only by the scientific name, presumably to minimize automatic knee-jerk negative responses, I commented on my interest about how this plant worked in the ecosystem.  The poster replied back with a list of Hymenopterans (bees, ants, and wasps) that had been observed by scientists in 2015 on dollarweed flowers at Archbold Biological Station here in Florida. (See note below.)

Wouldn't it be great to get some free, round-the-clock pest control in your gardens?  Especially pest control that specializes in controlling some of the insects above without, at the same time, killing praying mantids, honeybees, or monarch butterflies?

Well, you can have exactly that sort of pest control - IF you leave dollarweed and other small, flowering plants alone in your lawn, instead of treating them like public enemy #1.  In fact, this sort of situation is why Greg and I don't use chemicals on our lawn.  If it grows low, is generally green, and can be mowed, we let it be.  Because of their relationships with native pollinators, I prefer to have native plants as weeds in my grass - rustweed and some of the sedges, for example, as well as dollarweed - but it's almost impossible to have native broadleafed plants without also having non-natives, so we "live and let live". 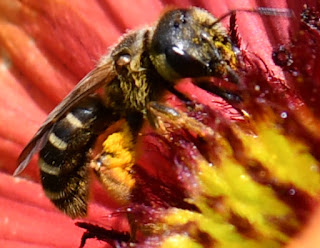 The only one of the insects in the list above that I've knowingly observed in my yard is the native bee, Halictus poeyi, Poey's Furrow Bee, shown in the photo above on Gaillardia and identified on BugGuide.net.  Coincidentally, it's the only one of the insects on the Archbold Biological Station's list with a common name. That doesn't mean the wasps aren't an important part of the natural web of nature, too, it just means that people haven't paid a lot of attention to them.  They're generally small.  They're not very colorful.  They don't bother people. Until recently, it's simply that nobody has paid much attention to them.  Generally, scientists often don't know which species, exactly, each wasp specializes in utilizing as prey for food for its larvae.

What a shame that we've ignored these important parts of the ecosystems in our yards and gardens...but what an interesting chance for everyday gardeners to help restore the balance of nature.  Literally as well as figuratively.  Best of all, this ability to help restore Earth's ecosystems is as easy as refraining from using chemicals on our lawns.  Seems like a no-brainer to me.


_________________
Note:  According to the Instagram poster "floridaplants", self described as a botanist, this is the list of wasps and bees that were observed nectaring at dollarweed, Hydrocotyle umbellatus, at Archbold Biological Station in Florida.  The scientific paper (?) is Deyrup, M.A. and M.D. 2015. Database of observations of Hymenoptera visitations to flowers of plants on Archbold Biological Station, Florida, USA.  Unfortunately I haven't been able to get a copy of this database online, so I'm going out on a limb here and assuming the information is accurate.  After all, it's not like many people have the interest or ability to make up a list of scientific names like this.