In honor of The Big Year, a surprisingly good movie that Greg and I went to see last Friday, I thought I'd post a few bird shots from 2011.

This is my most recent bird photo, taken this morning when a hungry white-crowned sparrow forgot that I was less than 10' away and flew in to grab a bite while I was photographing insects on the aromatic asters. White-crowned sparrows are only here during the colder months - the way this guy was eating, he was a new arrival needing to fill up after a long migration. 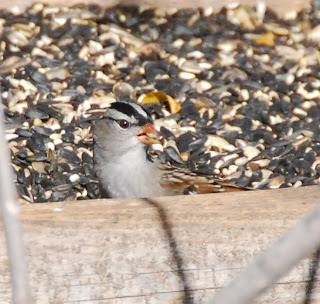 These next two are from our recent trip to the east coast, both taken at a beach in Acadia National Park. The first one is of a semipalmated sandpiper.... 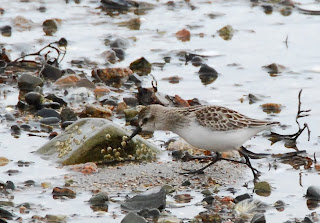 and the second one is of a semipalmated plover. Greg took both of these shots! And although the photos were taken in Maine, these two species migrate through Kansas as well. 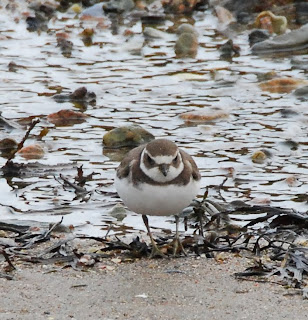 The next photo is of a highly irritated Carolina wren who was indignant at my lengthier-than-usual trespass into his/her territory while I was trying to photograph a ground-nesting wasp in the front garden on August 1st.. He/she had babies to feed! 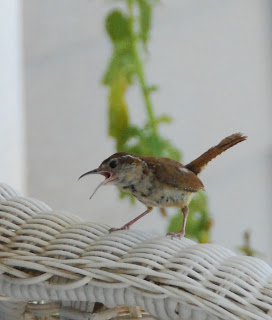 While we were on the spring garden tour on May 21, I noticed this pair of turkeys who seemed really curious about all the fuss and bother going on in their normal feeding grounds. 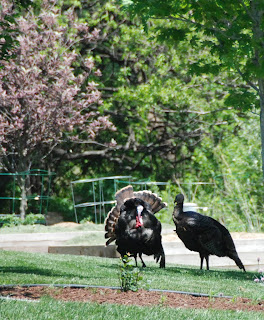 Photographed in our front yard on April 16th, the male red-winged blackbird at the top of this next picture wasn't satisfied with just red and gold wing epaulets - he was sporting a light gold and pink necklace as well! His more normally clad relative is at the bottom of the picture. 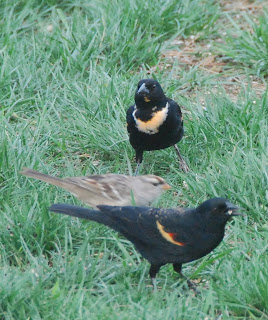 And, lest we forget that seasons change dramatically in Kansas, here is a photo of a female red-bellied woodpecker on the leeward side of a tree trunk last February, taking shelter from the bitterly cold wind. 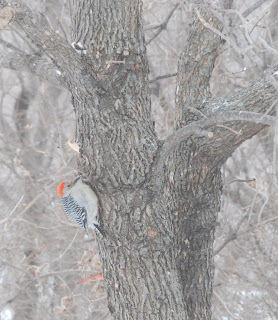 If these photos intrigued you at all, be sure to see The Big Year. It's a fun movie with appealing human-interest story lines and some pretty decent shots of scenery and birds around the country. Who knows? Maybe you'll decide that birding isn't so odd after all, and feel inspired to do a little binocular time yourself!
Posted by Gaia Gardener: at 6:33 PM

I had to LOL when I saw the wren. .Somedays I feel just like that!! I enjoy bird watching too, if you have ever been to my blog and clicked the "birding" label, you could see! My hope for this year (since it didn't pan out last year)is to go eagle watching at Chaplin nature center this winter! It just always amazes me how diverse God's creatures are! Enjoyed your post!

In fact, Melanie, today is one of those days I feel almost exactly like that wren! LOL!