"What We Did On Our [October] Vacation"

We toddled off to Boston about 2 weeks ago for a long overdue visit with our son, Sean. I was finishing David Abram's interesting book, Becoming Animal, at the time and I fully expected to feel a little "out of place" when we first landed...but, truthfully, I didn't.

After we'd been there for a few days, I started noticing things that surprised me. We walked a lot and used public transportation almost exclusively while we were in Boston itself. I loved it (despite my bad knees). In fact, by the 4th or 5th day, my knees were doing somewhat better, which seemed counter-intuitive since the pain is caused, at least in part, from disappearing cartilage. I noticed, too, that the people who walked and used public transportation seemed to have a much lower incidence of obesity than is standard for our country. (It was actually a rather glaring difference.)

Locally sourced foods were rather easy to find in the restaurants - many restaurants even listed "their" local farms by name. The selections in these restaurants were always fresh and delicious and often served in unusual ways. 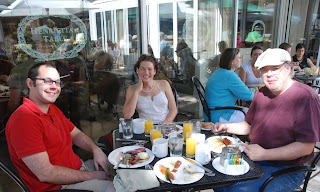 Sunday brunch at Henrietta's Table in Harvard Square, a gustatory extravaganza that Sean was eager for us to experience, was particularly spectacular. I have to say that getting the chance to sample all of the local foods was really exciting and enjoyable, as I only know one restaurant here in the Wichita area that works with local foods (Lotus Leaf in Delano - which is excellent, by the way).

On the natural front, though, things were a little less rosy. I didn't hear the wind rustling the leaves in the trees there, and it's a constant accompaniment to life here. I missed it. There were few birds around and even fewer bird songs...and I didn't see any bird feeders set up at all. At one point near the Boston Museum of Science, we heard a mockingbird in a small group of Bradford pears and stopped to try to see it, but it had hidden itself craftily out of sight. Yes, Boston is a city, but it still seemed light on bird life in comparison to other cities I've visited. Maybe it was just the season. 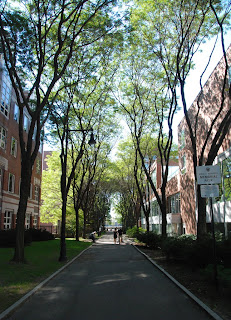 There were more honeylocusts being used as street trees than I expected. Somehow I think of this species as a plains tree rather than as an eastern deciduous woodland tree. Occasionally the honeylocusts were used particular effectively. This photo is of an allee of honeylocusts leading from Harvard Square down to the riverside park. I'd never thought of using them in this manner, but it created a distinct sense-of-place with a pleasant, lacy effect...if not the gravitas that I might have expected for a path coming off of Harvard Square! 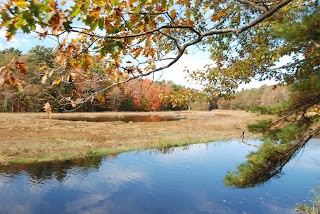 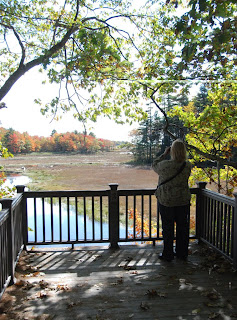 We were able to make it a little ways up the coast of Maine during the middle of the week while Sean was working. The Rachel Carson National Wildlife Refuge called to us and we enjoyed the opportunity to learn a bit about how the salt marshes along the coast work, as well as enjoying some very pretty fall foliage (photo above). The office had binoculars and a bird guide available to borrow, so I was even able to do a little birding. It was early afternoon, which is hardly a grandly productive time to bird, but I managed to see several fun species: a male black-throated blue warbler (the first I've seen in a long time!), a small flotilla of green-winged teal, and several white-throated sparrows.

Although this last has little to do with nature, we stopped for the night in Camden, Maine, and went down to the harbor to look around. Both of us were rather amazed and amused at the way they now winterize some of the boats, including fairly large sailing vessels - they shrinkwrap them! One had been completed and 2 more were in the process of being "put to bed" in this way. I can only imagine the comments that the ghosts of sailors past are making! 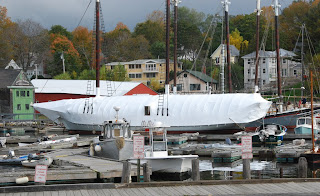 Although I'll spare you further descriptions, we had many other interesting and enjoyable experiences while we were there - a great tour guide on the Freedom Trail, lunch at the Green Dragon pub where the Sons of Liberty often met, the chance to see an excellent exhibit on Pompeii at the Science Museum, and, of course (and foremost!), the chance to enjoy a wonderful visit with Sean and Tina. All in all, a great getaway.
Posted by Gaia Gardener: at 3:58 PM

It does look like you had a great visit and trip. Funny about the boats. It is interesting to see how people in different areas live.

Yes, it is interesting to see how other folks live. Sometimes we get so wrapped up in our own way of doing things that we forget there are other ways!

I enjoyed several days in Boston last spring for a conference. .what a beautiful city indeed!! I marveled at their little gardens planted in front of their brownstones. .I'd die for sure if I had a 6 x 6 square area for greenery! Glad you had a nice trip!