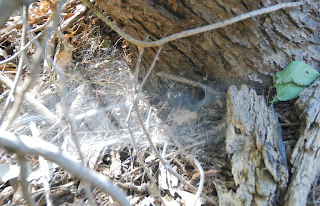 Have you ever noticed sheets of spider web, usually near or on the ground, with sort of a tunnel or hole formed in the middle or off to one side? These are the webs of funnel web spiders - an appropriately, if not imaginatively, named family. For years I've seen the webs, which are rather intriguing, but I don't remember ever seeing the spiders. Funnel web spiders tend to be nocturnal, hiding deep in their tunnel during the day or anytime they are threatened.

Recently, however, I've been honored to see funnel web spiders in their webs twice, and both times I was able to photograph them. This photo came out the best.... 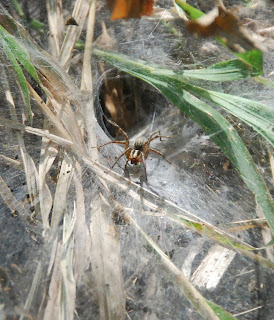 In this genus, Agelenopsis, the spider builds the heavy, bottom "sheet" with its tunnel, then makes a lighter weight layer above the main web. Insects or other spiders don't see the top layer and hit it accidentally, getting knocked down onto the main web where they get tangled for just long enough for the funnel web spider to spring out and nab 'em.

As I did research for this post, I found numerous links to the "deadly Sydney funnel web spiders". It turns out that there is a completely unrelated group of spiders in Australia that also builds a funnel shaped web and are also called funnel web spiders. Unlike our western hemisphere funnel web spiders, the Australian ones are evidently quite poisonous. Unfortunately, they are also considered lots more "exciting" than our native nice guys, so they get more press and the majority of the sites I first found were referencing this totally different group.

Thankfully, our funnel web spiders are a peaceful lot, much preferring to hide when threatened. If you handle them, they can give you a painful bite, but they do not have the deadly venom of the Australian group. So - word to the wise - I wouldn't recommend trying to pick one up!

Meanwhile, enjoy any "fairy handkerchiefs" that you come across this fall - and be sure to look and see if you can see their occupant.
Posted by Gaia Gardener: at 3:11 PM

These spiders are all over one of my iris beds. The leaves are full of the webs. Nice to know more about them. Thank you for checking into them.

As for the monarch butterflies. That video was shot about 2:30 pm today. 10/4/11. They were shelter from the stronger winds there and in the shade. There were still several out there this evening (about 7:30 when I looked).

It's rather like having spiders in the house, too. As long as they're not brown recluse or black widow, I'd rather have the spiders than whatever they are feeding on - so I make it a practice never to knowingly kill one. I'm not sure what's been in amongst your irises, but I'll bet there are lots fewer or them now!

Thanks for the update on the monarch clip. That was just beautiful!

We have a lot of spiders around our property and in the gardens. I, like you, leave them alone because they do eat a lot of pests. I did have a big funnel at the end of my herb bed and one morning I saw a very large spider (like your wonderful picture) having a "conversation" with a much smaller one. I'm assuming the larger was the female and the smaller the male, and there might have been a bit of flirtation going on, but after a couple of passes at each other the larger one scooted into the tunnel under the siding.

I have a deal with outdoor critters like spiders. If you don't come inside, I don't have to kill you...

Gaia Garden
Hello. I looked on your blog for an email address and didn't see one so I'm posting this note here.
I have a post about some flowers I found in our lawn. I was wondering if they're a native flower. If you have time, can you please check out the post: http://gardenonsherlockstreet.blogspot.com/2011/10/lawn-gives-gift.html
Thank you!!!

~Gaia Gardener
Thank you for the plant identification. The places that I planted them can handle a little spreading. Obviously, these got mowed all summer. I think I will trim them some to keep the low grow appearance.

Thanks on the bugguide.net tip. When I get a chance I'll have to log in and send them the photo.

I'm going to put some milkweed seeds out this fall so winter can do its thing for the seeds like in nature. The rest I will put in the refrigerator. I was reading about milkweed online off and on all weekend.

I've never tried to start milkweed from seed; I have no idea how difficult it might be. Hopefully they'll come up like the proverbial...wildflowers they are!

Thanks for the help identifying the wren. There were a handful of them that weekend. I think the rain kept them in the garden and close to the patio. The light with the rain made it look a little grayer than in reality. A cute visitor and I was happy to watch them eat small crickets on the patio.