Marching for A Principle

I did something last weekend that I never dreamed I would ever do: I marched in a protest. 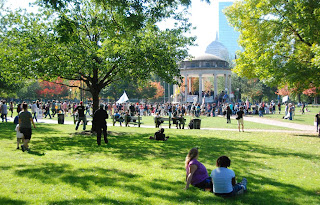 We were in Boston, visiting Sean, and we decided to go to the Boston Commons on Monday, Columbus Day, to see what the Occupy Boston rally was doing. It seemed so appropriate - we had just walked the Freedom Trail a few days before and we were going to get a chance to see freedom of speech in action...and on the Boston Commons, no less! This first photo shows people beginning to gather on the Commons for the march. 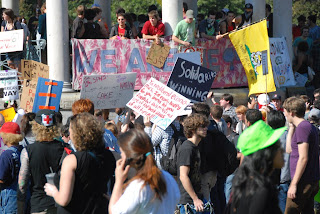 This was primarily a day for students to protest, but others were joining in too. As a true grass-roots movement, the messages were mixed and most were not professionally choreographed. Signs were on everything from cloth banners to posterboard to scraps of recycled cardboard. Some were well done, most were emotionally hand-lettered, only a few were distracting and definitely just attention seeking. The sign below captured the mood quite well. 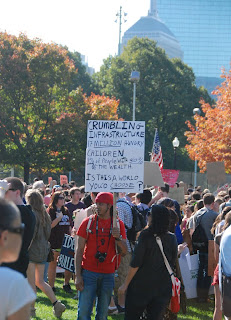 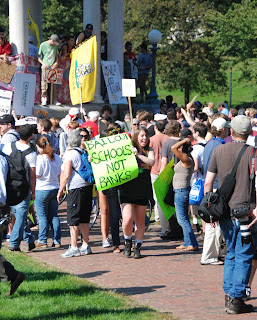 Although the topics ranged from wanting better support for education... to anger at the bank bailouts... 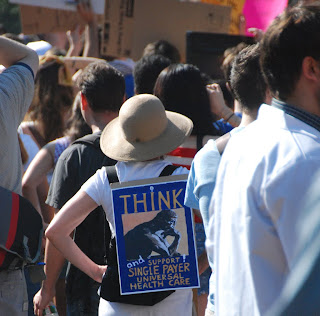 to the need for decent health- care... to pleas for more jobs, most signs were (in one way or another) firmly against any more money being concentrated in the hands of a few rich people at the expense of the vast majority of Americans. Only a couple anti-capitalists or anarchists seemed to be in attendance; definitely a relatively minor note overall. 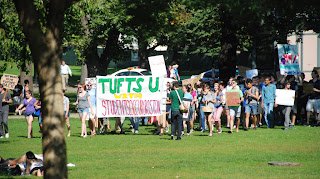 There were student groups from several of the big universities attending - this group from Tufts, for example, marched in together, proudly proclaiming their school affiliation. Several other similar groups did the same, but I didn't get a chance to see their signs. Sean had heard that Harvard, MIT, Boston University, and others were all sending contingents. 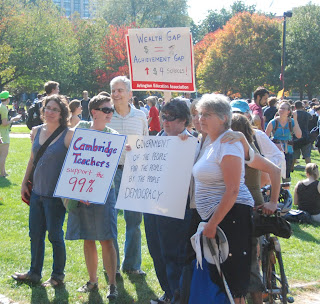 There were teachers' groups there too, like this one from Cambridge. Greg even noticed a cluster of medical students! 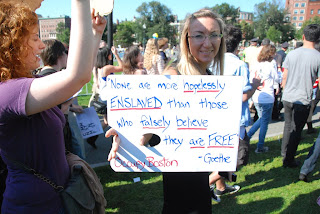 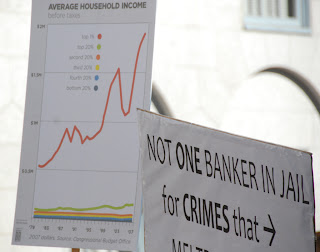 As you would expect from academics, some of the signs were more textbook chart or English paper quote than rabble-rousing rhetoric. (Note the citations at the bottom of the charts!) 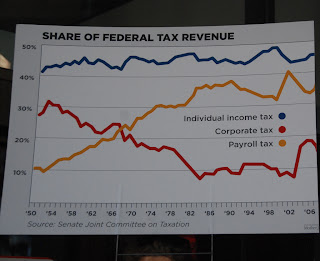 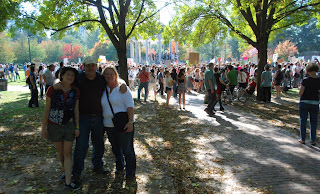 Those of you who knew me long ago will realize that I'm generally not a very public-protest sort of person. Those of you who know me now will realize that I sympathize much more with the Occupy Boston marchers than with the uber-rich who are currently controlling our country for their own benefit. Those two sides of my personality were definitely vying for supremacy as we watched the marchers gather and I began to think about joining in the march. 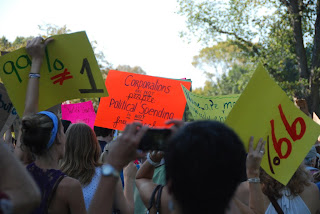 Ultimately, though, I simply decided that if a principle was worth believing in, it was worth standing up for - so Greg and I joined the marchers as we walked from the Boston Commons, through the narrow city streets, and down to Dewey Square. Many folks stood along the sidewalks or at the windows above and watched as we went by. Quite a lot of them took photos. A few gave us a thumbs' up sign or a victory "V". Some watched impassively. Greg only saw one old man who gave a thumbs' down signal, and I didn't see anyone who was overtly negative. 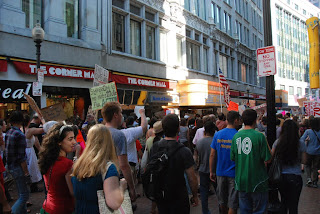 Did the march cause any particular change? Probably not. But I'm glad I was there, and I'm glad I decided to march along. Democracy only works if citizens get involved. When we convince ourselves we're "too good" for politics, I'm more and more convinced that we give away control of our country's destiny into the hands of those who will mine it for their own personal gain. And that's not something I want to sit quietly by and let happen.
Posted by Gaia Gardener: at 10:41 AM

Everyone needs to be informed and involved for sure!

Thumbs-up to you! I was quite the protester in the 60's, but apathy has taken its toll on my join-up spirit. Good for you! And if enough of us do it, good for all of us!