Maintenance in the Native Plant Garden

As I've given talks about utilizing native plants in our landscapes, I've become aware that many people are scared of "losing control" in their gardens by using native plants and by following organic gardening methods.  So I thought folks might be interested in a blow by blow account of how I maintain my native plant landscape.  I actually think that my garden chores are significantly less onerous than those of more traditional gardeners.

To start with (or, perhaps, to end with), I don't cut back my perennials in the fall or winter.  Many insects overwinter in or on dead plant stems, including some of our native bees;  other insect species overwinter in the leaf litter.  Predators are particularly likely to be among the insects overwintering this way.  The leaf litter also provides great foraging habitat for winter birds, as do the standing seedheads.  Watching the birds forage and seeing the patterns of the plant stems adds winter interest to the landscape.  When you add in the fact that standing vegetation holds snow (moisture) in place better than "clean" beds, you definitely have a winning winter combination for the garden.

Winter, then, is pretty basic.  Enjoy the scenery!

As the plants begin to green up in the early spring, it's time to do the first chore of the year:  cut back last summer's dead plant material.  I consider this the main "work" in the organic, native plant garden.  Otherwise, the garden takes very good care of itself.  The timing of the spring cutback is always a balancing act for me.  I prefer to wait long enough that there aren't many late freezes left, although that's not always possible on the prairie.  Since I have planted a variety of crocus, daffodil, tulip, hyacinth, and grape hyacinth bulbs, I've started using their early blooming as my signal.  Darn it - I planted them, so I want to see them!

This year my spring clean up has been particularly protracted, but that's okay.  This is gardening, not a precision dance routine or an accounting balance sheet. 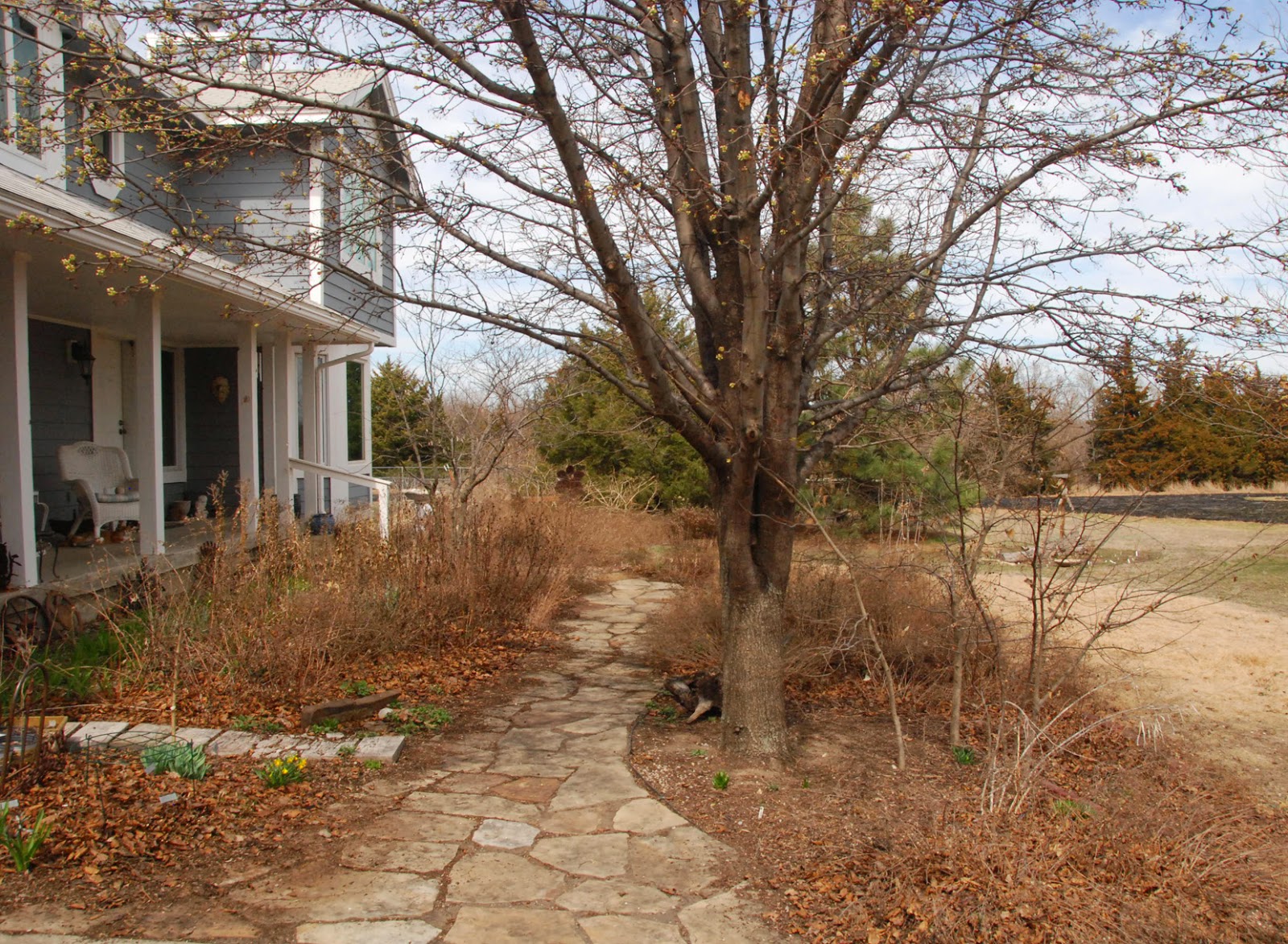 So that I could see the petite daffodils which had begun to bloom in the front beds, I started the spring clean up on March 18th this year.  This photo was taken on the 20th, the day after we burned the front tallgrass (which you can see in the distance).  All I had done so far was cut back the asters at the very front left of the photo...and, if I remember correctly, a few perennials along the sides of the path itself. 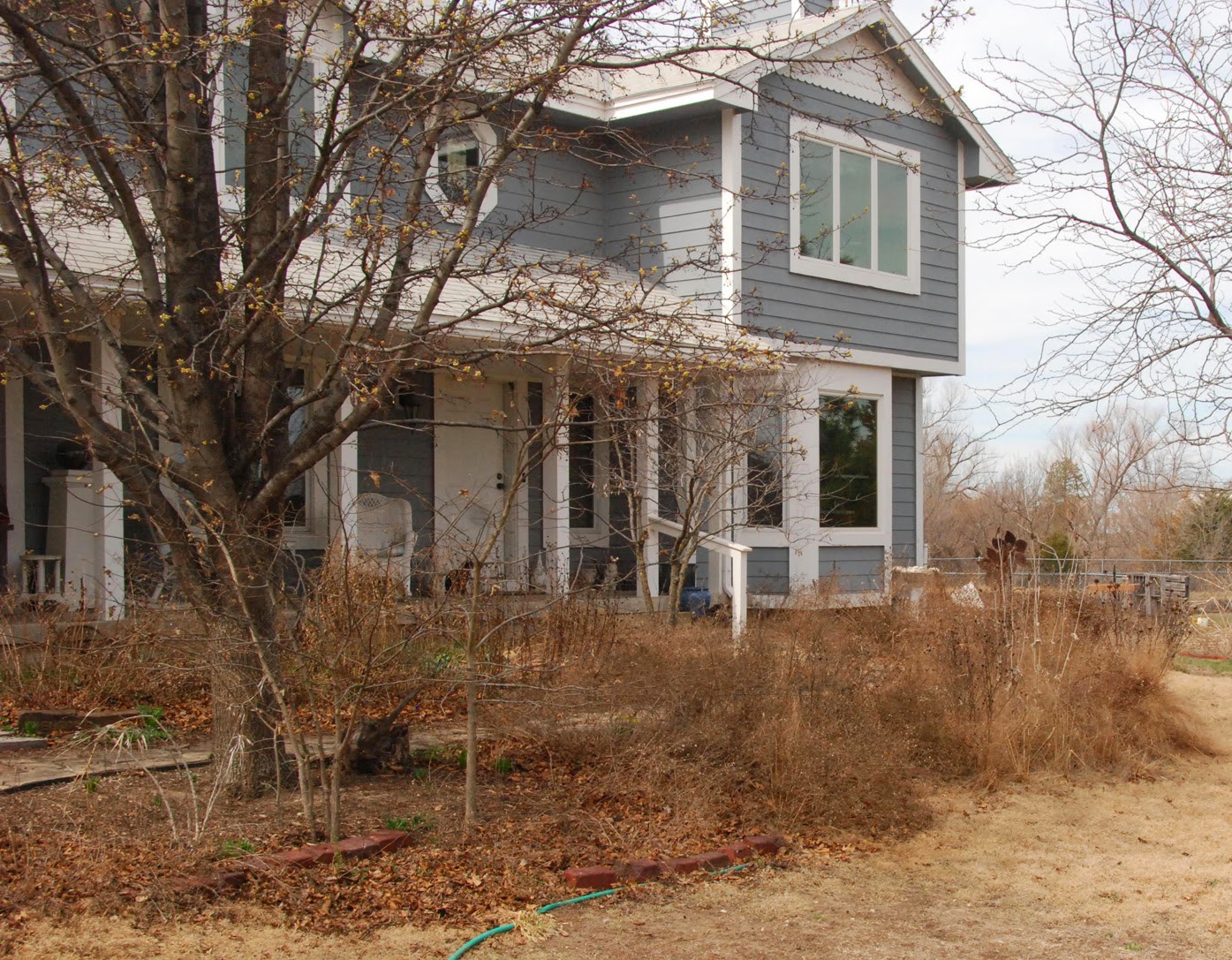 Here is a slightly different view, taken at the same time.  Overall, this is what the front garden looked like for most of the winter.  When I looked out the front windows, it was a rare time that I didn't see birds poking around. When we had some snow, the patterns could be stunning. 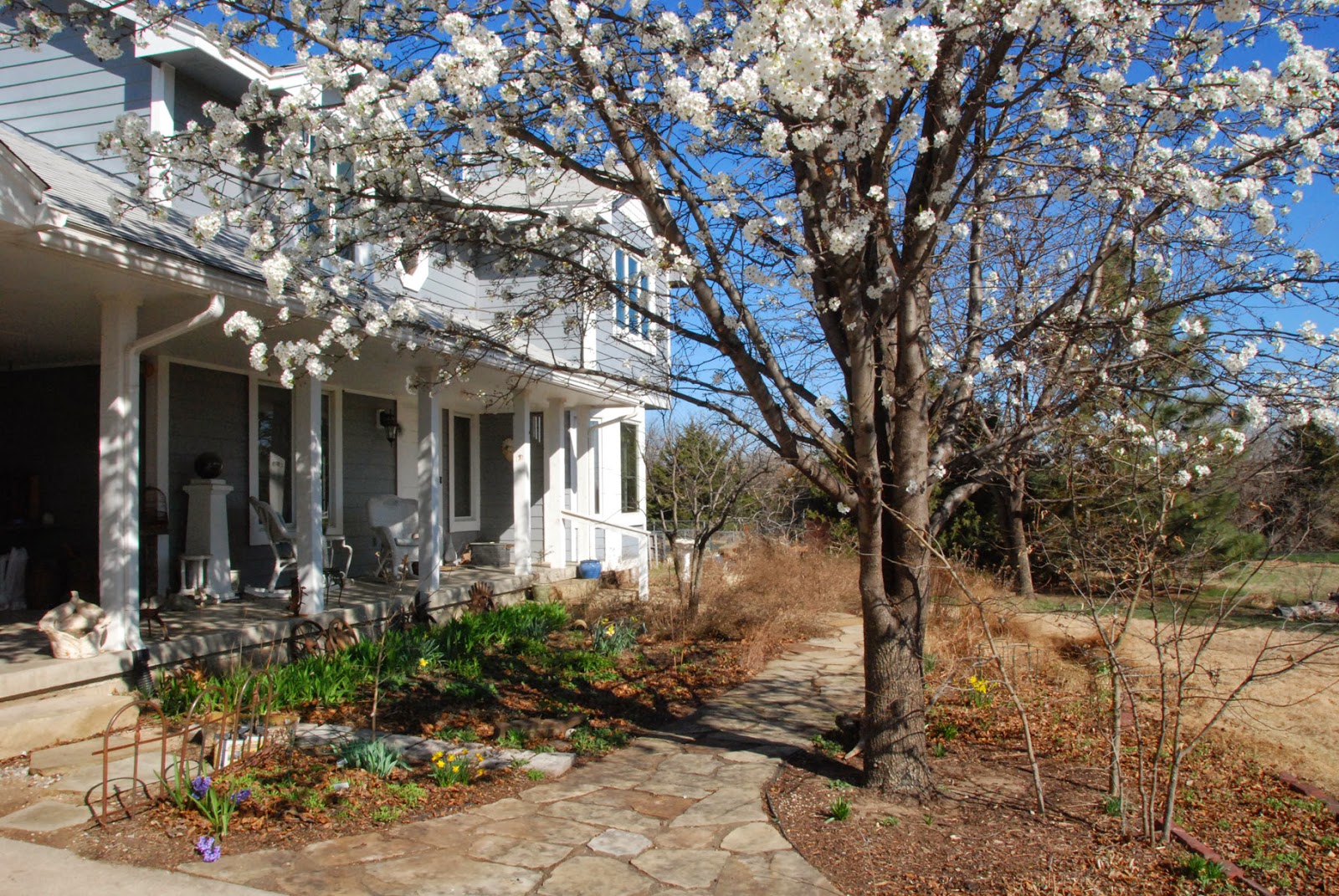 By the 26th of March, about a week later, I had cut back about half of the stems in this bed, starting at the driveway.  Of course, a few more things were blooming, too, including the Callery (Bradford) pear.  It always amazes me to see how quickly plants green up in the spring!  Several more types of daffodils had opened, and the blue heirloom hyacinths by the driveway were putting on their annual show.  (You can always click on the photos to enlarge them and see more detail.) 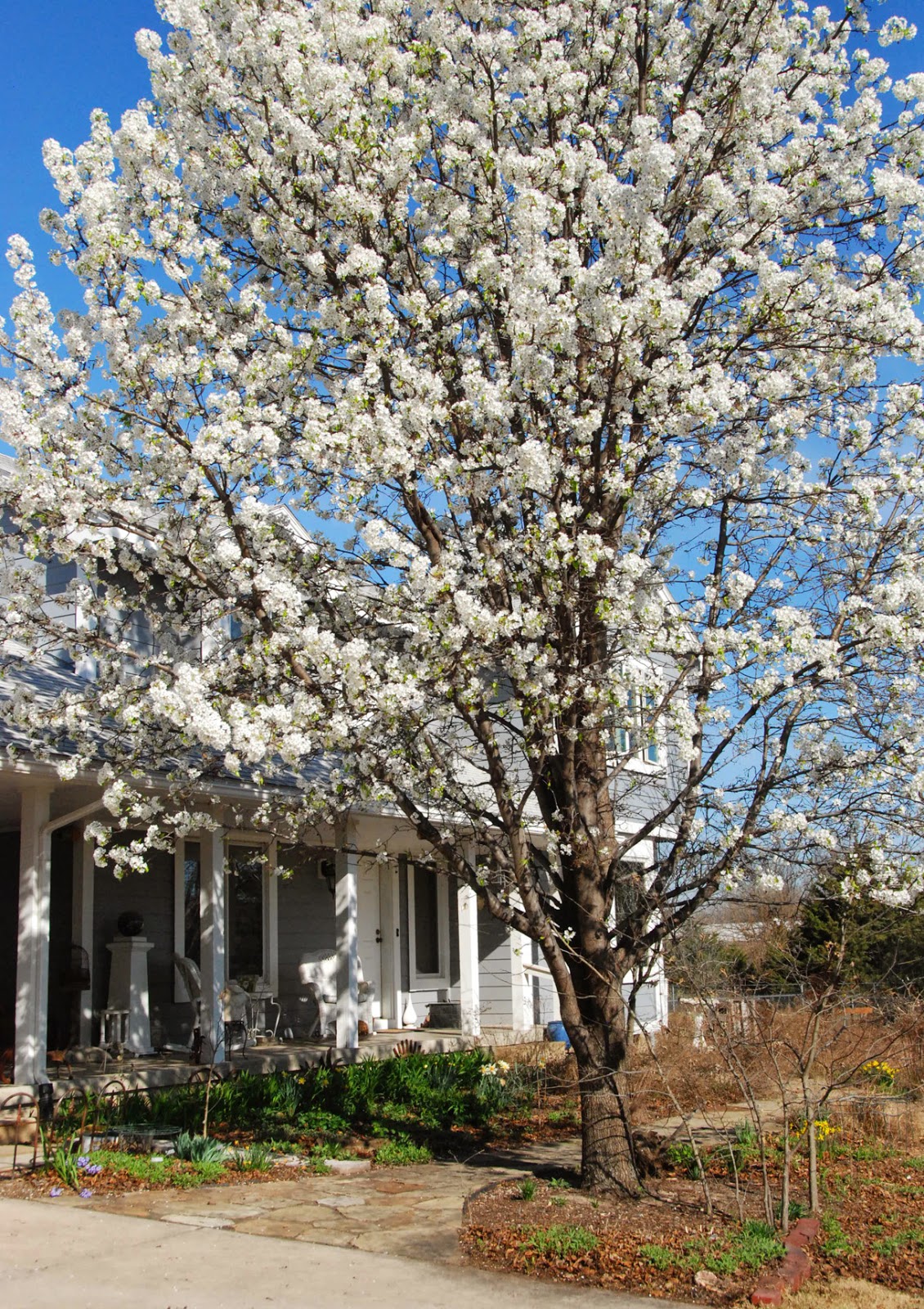 Just 5 days later, on the 31st, you can even see how much the daylilies right by the foundation had sprouted up.  I hadn't done any more cleanup in the garden yet, though, because our kids were visiting for the last bit of March and the first week of April. 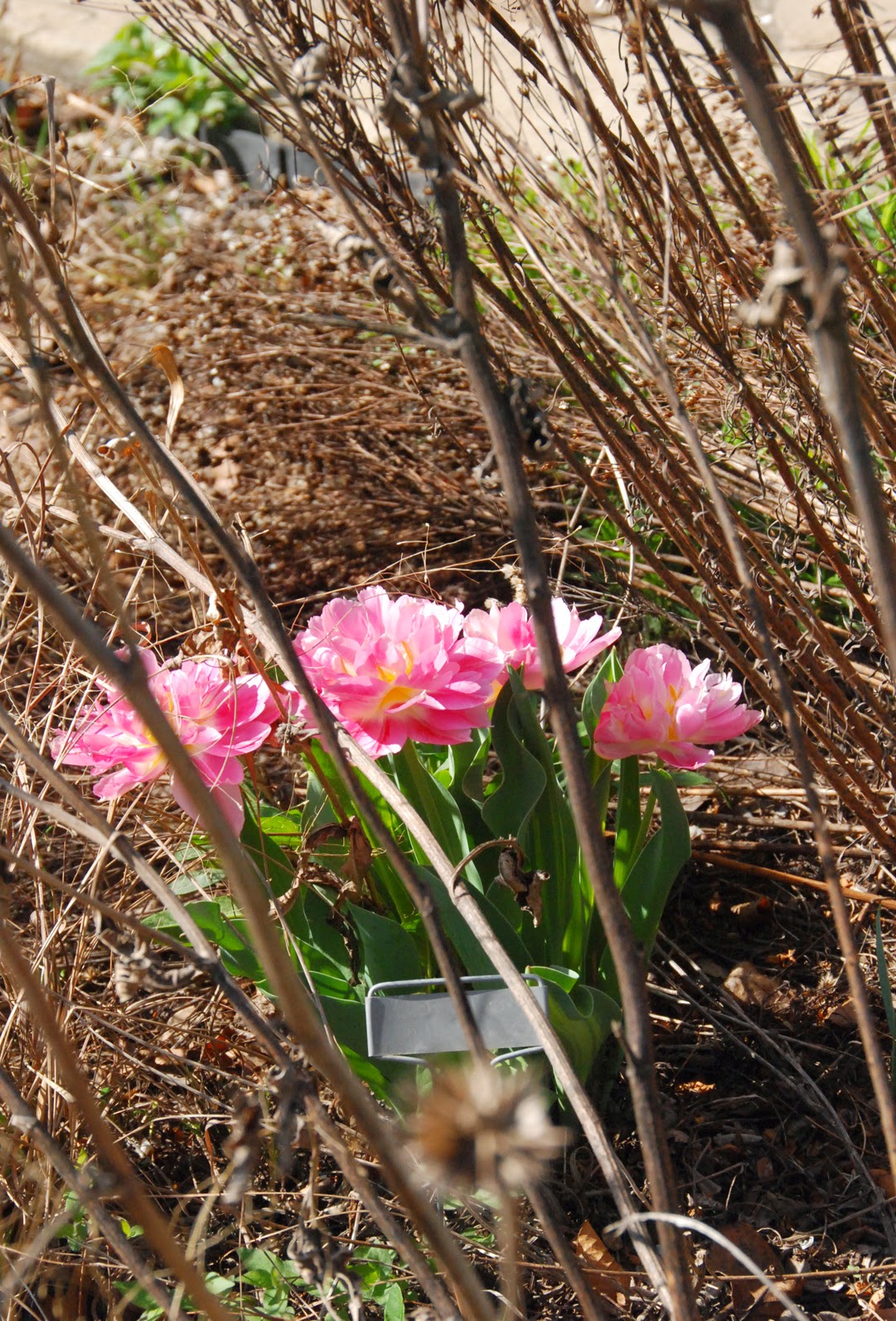 In fact, I didn't get more cleanup done until 2 days ago, when I noticed the Peach Blossom tulips in full bloom amidst the cacophony of last year's ironweed and Echinacea stems.  So I did a bit more work that day.... 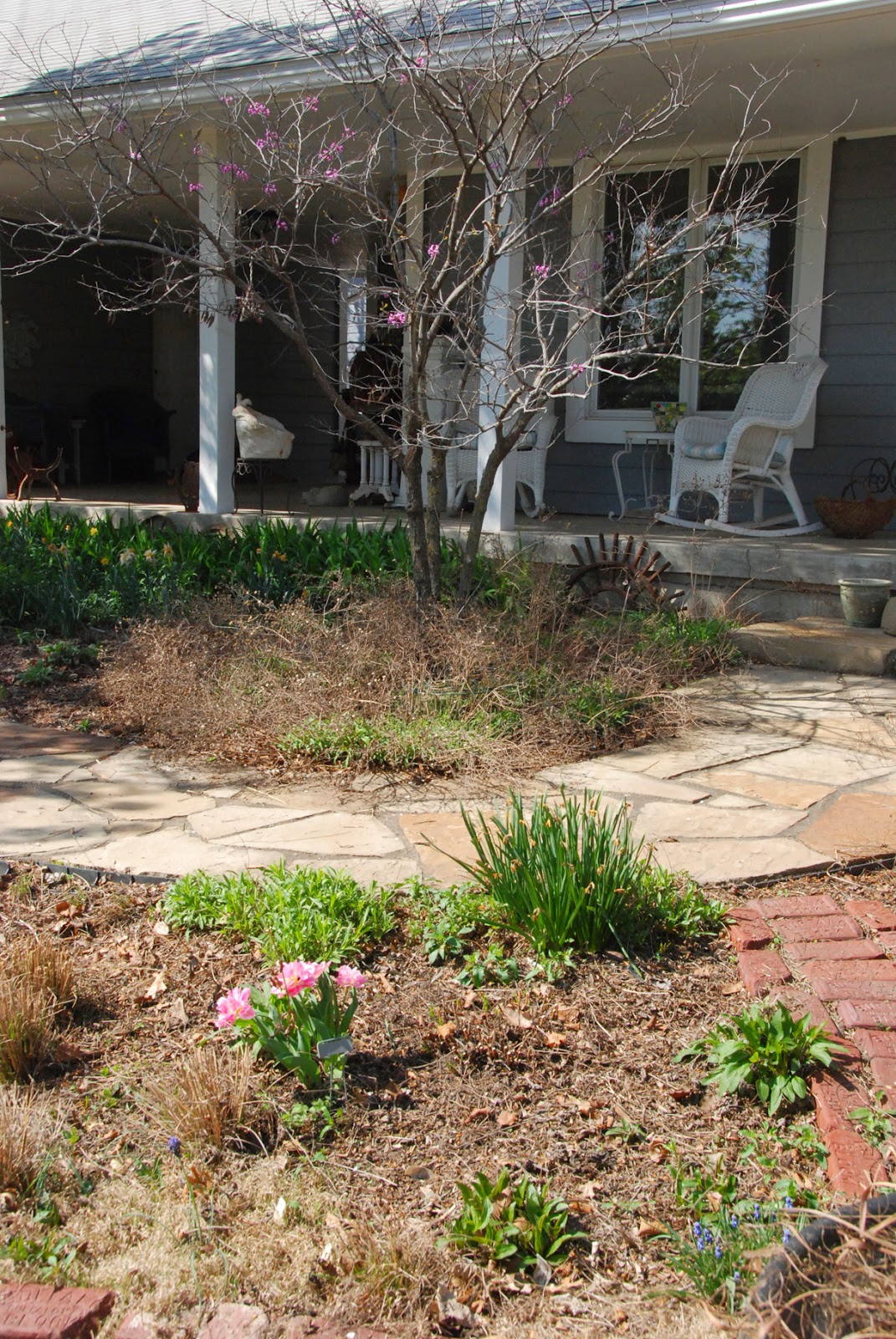 ...quitting when I'd cleared everything to the south of the little brick access path...except for the aster stems under the redbud clump.  (See?  I told you this wasn't a remotely frantic process!) 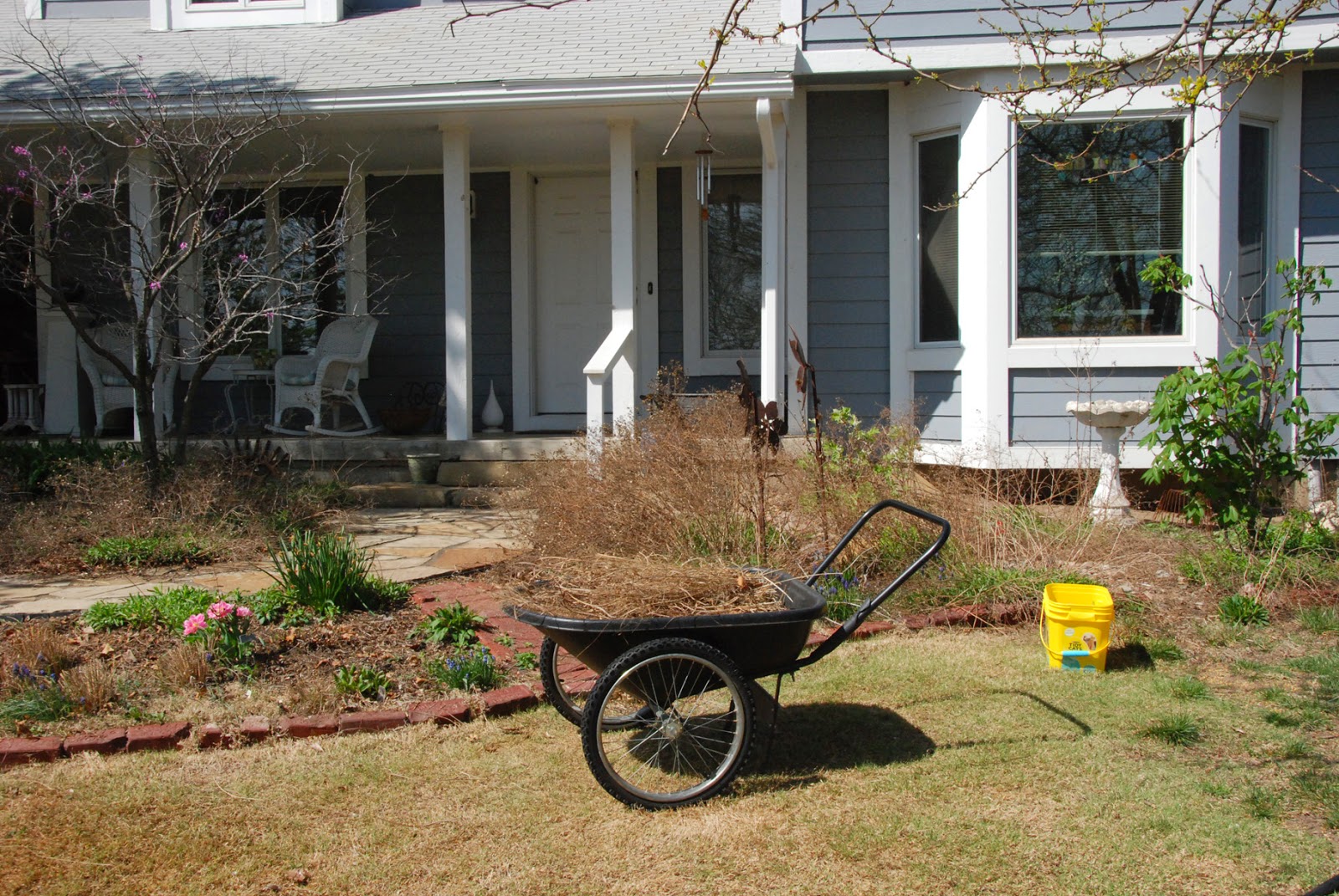 You can see the newly exposed Peach Blossom tulips a few feet in front of the wheelbarrow. The wheel barrow has the last load of stems for that day, which I take to the brush pile out back, while the yellow bucket holds deadheaded daffodil stems and other non-seedfilled detritus that can be put in the compost pile.   Right now there is a lot more for the brush pile than for the compost pile - but that ratio changes throughout the growing season. 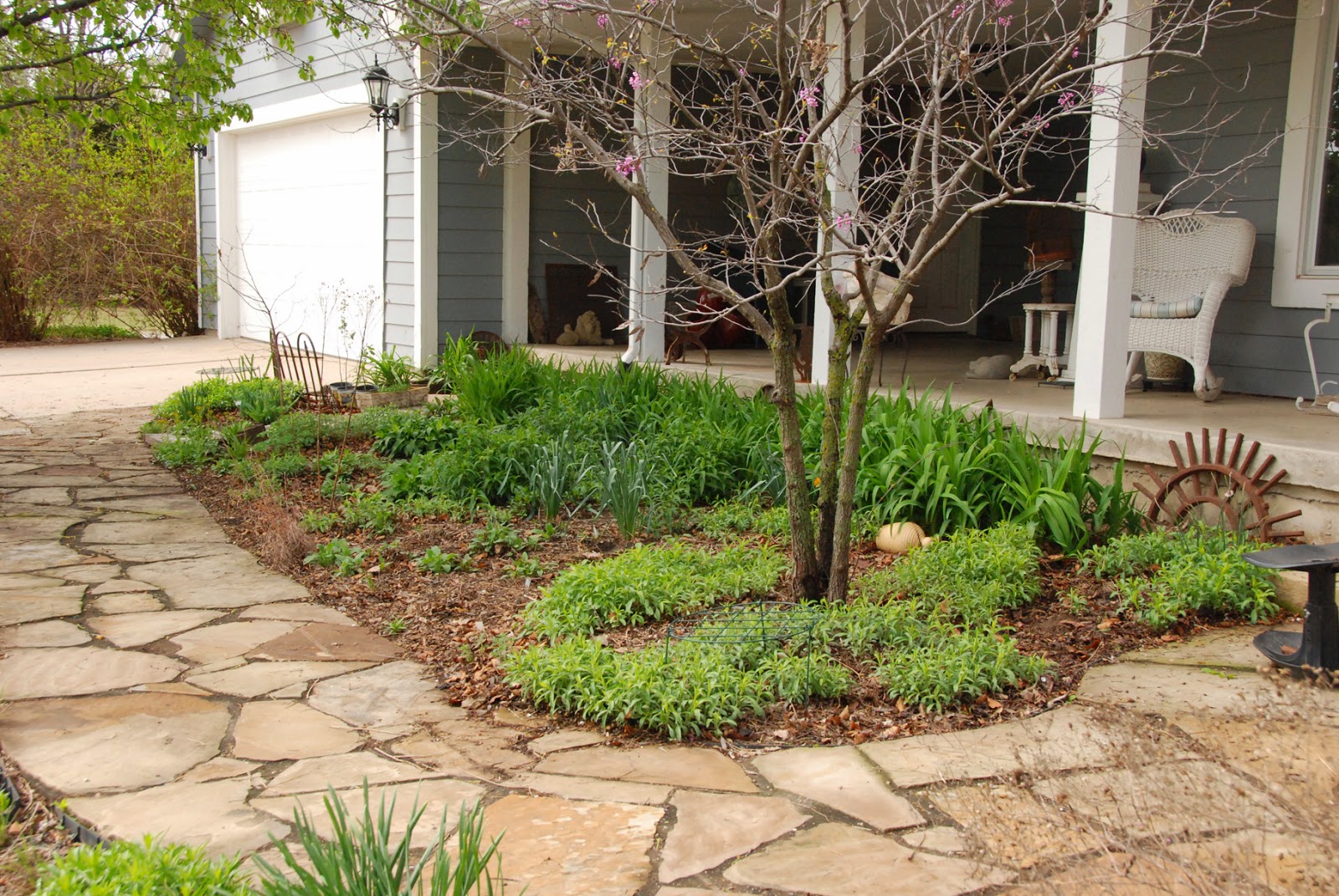 This morning, I finished cutting off the last of the aster stems under the redbuds and took this photo of the bed between the house and the walkway.... 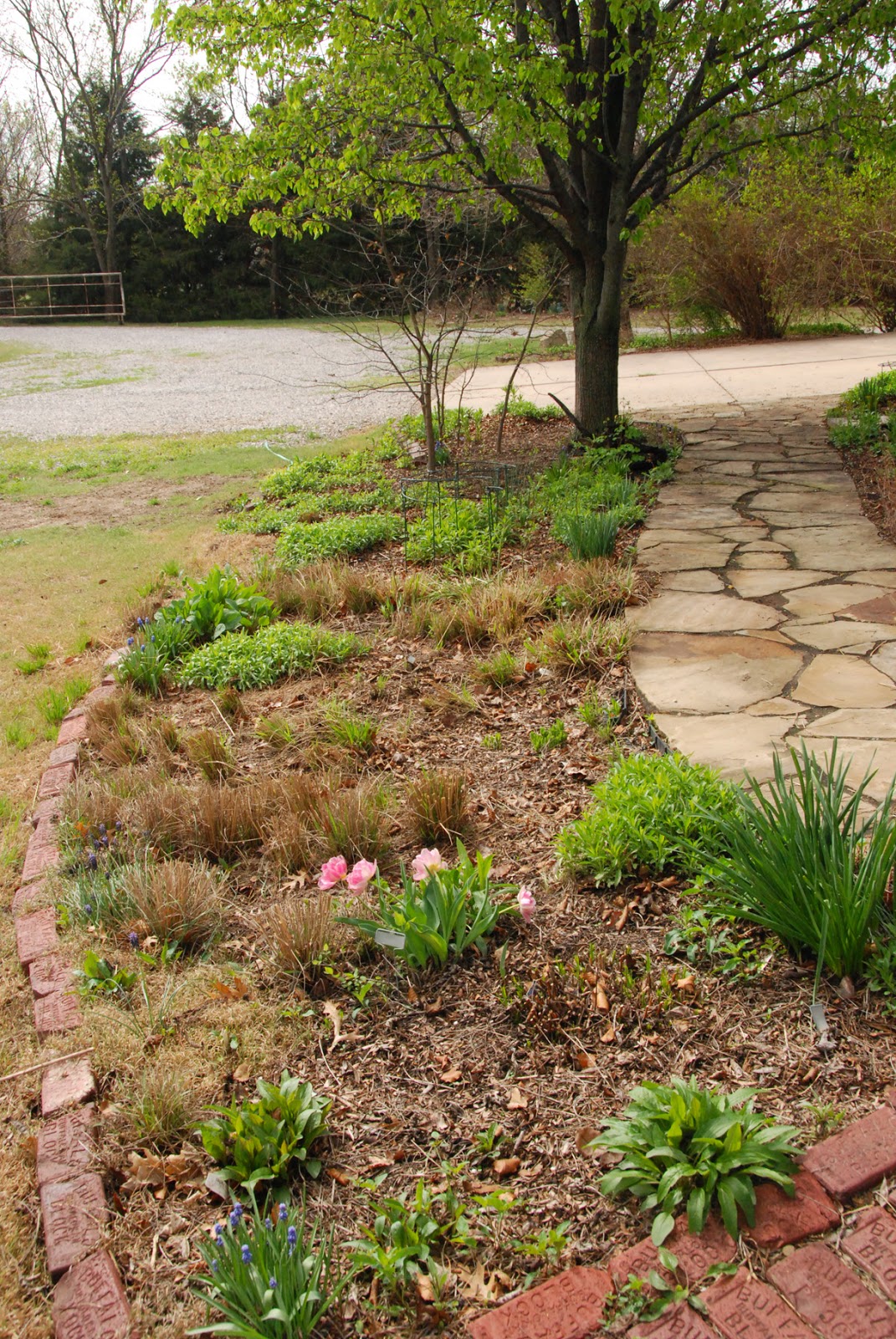 ...and this photo of the bed between the walkway and the buffalo grass, both looking south.  Although cutting back the stems took me bits and pieces of 3 weeks to accomplish, that was due to MY lack of stick-to-it-iveness, not due to this process taking any huge amount of time overall.  Now that my native flower beds are established, this is the primary job that I need to do in any of  these beds all year.  Period.  It's really pretty simple.

That said, the beds do look better if I follow up this tidying chore with some editing, which is best done at this time of year.  I'll discuss that in the next post. 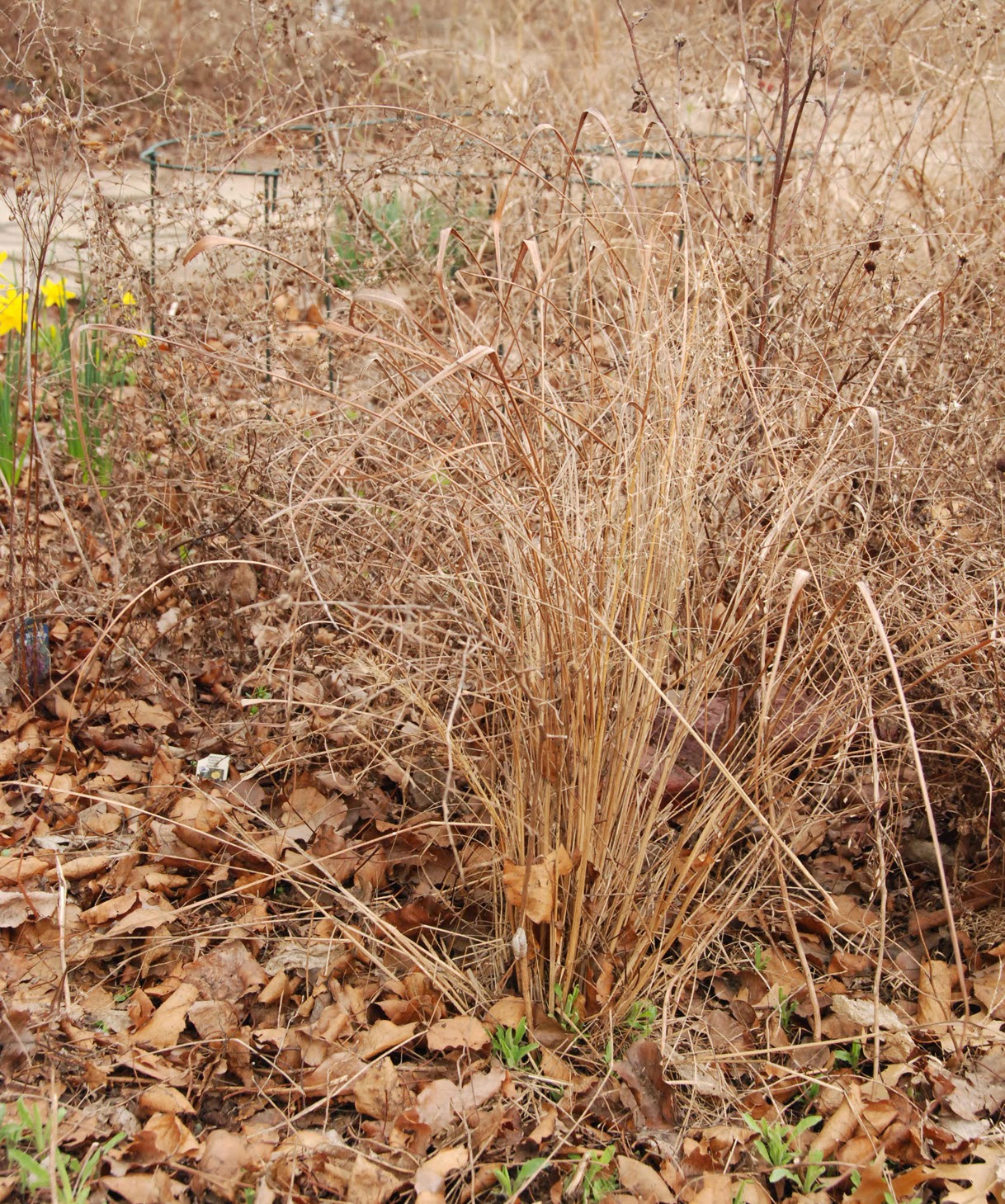 Oh, by the way, I found 4 Carolina (praying) mantis egg cases and 2 black and yellow garden spider egg sacs among the plant stems as I cut them back.  If you look closely, you can see one of the mantid egg clusters at the base of this grass clump. 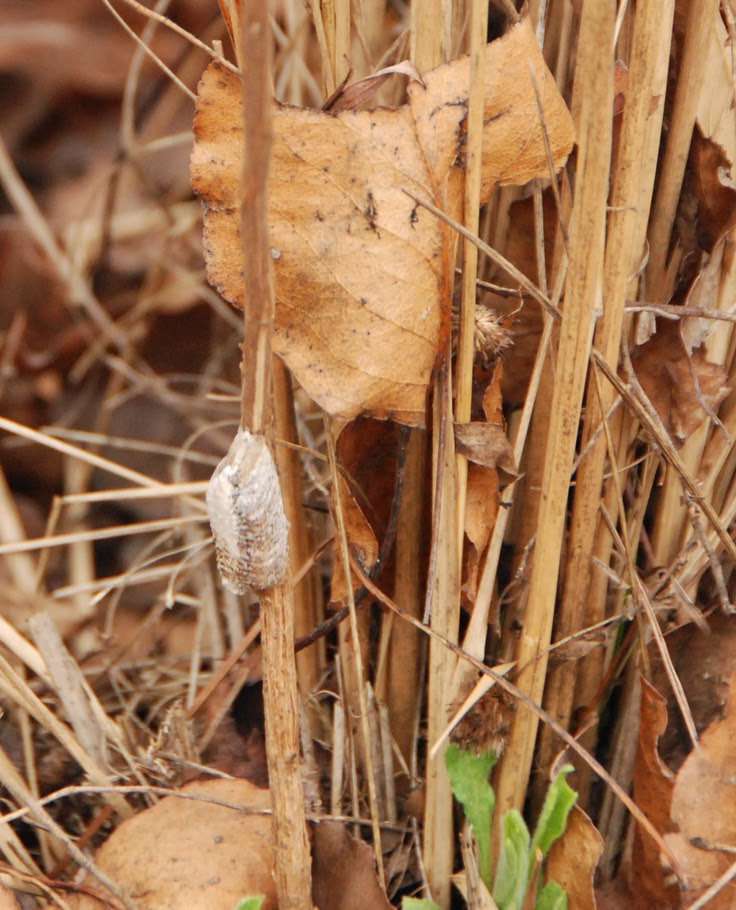 I saved the plant stalks with the egg cases on them and placed them strategically in the trimmed areas of the garden, so the young could hatch out and do their thing without further interference.  Last year was obviously a good year for predators in my garden!

I enjoyed seeing the different areas of your property. Cleaning up at my own pace over a period of time like you did is how I like to do it. Yes, I have way more for the brush pile this time of year than for the compost.

Like you, I leave the brush pile until later in the summer or even the fall to burn - I want to be sure that all the beasties who might have grown up and/or overwintered in the stems have a chance to emerge.