The Garden in the First Part: Heirlooms and Memories

Early spring in Kansas is spring bulb time.  Little else can take the roller coaster weather and still be willing to "put it all out there" in the way of blooms and leaves.  This year seemed like a particularly beautiful spring for bulbs.

To me, spring started in mid February this year.  The first yellow crocus blooms shine out among my other photos on February 21st.....

Generally speaking, I prefer heirloom plant varieties for non-native plant species.  There's just something that nourishes my romantic spirit in thinking that I might be saving an old variety of plant, almost lost to horticulture, for future generations.

I have a few heirloom crocus varieties, but I can't say that I can tell a lot of difference between them and more modern varieties.   Greg has been very interested in scattering crocuses throughout the grass in the yard, which makes labeling an heirloom variety impossible, so crocuses are one species in which I have tended to just go with "cheap and cheerful" modern bulbs.

Heirloom or modern, crocuses seem to bloom in the same basic order:  yellow first, then white and finally purple. This cluster of 5 clumps illustrates that fairly well:  the yellow clumps (helped along by munching rabbits) are essentially done, the white clump is in full bloom, and the purple clumps (also rabbit-pruned) are just beginning to open fully.

The entire process is slow but steady - the second photo was taken on March 20th, fully a month after the first photo.  Crocuses certainly brighten the late winter landscape for a long time...in what seems like a time period that lasts forever.

As the crocuses pass their peak, the daffodils begin.  Tete-a-Tete, a cute, perky, little, bright yellow daffodil is one of the first varieties to open.  I have my first daffodil photos on March 20th, the same day as the crocuses above.  By 9 days later, multiple daffodils have opened, as have the hellebores and the first of the hyacinths.  Looking across the landscape, though, things still seem pretty sere, even 2 days later on March 31st.

By April 4th there is a little more color, as the lilac leaves start to burst their buds and a few more flowers bloom.....

...and by April 10-11th there is much, much more color.  This was one small area of the courtyard bed on April 10th, showing 2 varieties of daffodils, my wine purple hellebore, blue hyacinths, deep pink hyacinths and grape hyacinths.

Taking a photo down the length of the bed shows a different angle to the same plants, just one day later.  It's rather amazing how different the bed looks from these 2 different angles.

Snow before dawn on April 14th literally dumped ice water on the party and dampened the colors, at least briefly.

Luckily the temperatures were just above freezing when the snow came down, so it actually did little damage.  We had a harder freeze the next night, after the insulating snow had all melted off, but even that didn't seem to harm too many plants.

By the 18th, the back courtyard bed was looking pretty spring-ish again.

I've been fighting a debilitating chest cold all this week, and the back courtyard bed has quieted down for now, so I haven't taken any photos of it in the last week.  If the weather cooperates, I'll try to get a shot in the morning.

Meanwhile, here are a few highlights from the spring bulbs and other non-native garden plants so far this spring....

Having specifically mentioned the Tete-a-Tete daffodils, it seems like I ought to include a photo of them!  This was taken on March 31st, but these cuties had started opening by March 20th and continued blooming for at least another week after this photo was taken.

I took this picture of my wine purple hellebore plant on March 29th, but I have a shot of its new leaves and flower buds just beginning to emerge on March 12th.  This plant put on a lot of growth in just over 2 weeks!

One of my favorite spring bulbs has always been grape hyacinth - the deep blue is SO satisfying!  When we first started planting bulbs the fall after we moved in, 7 1/2 years ago, I got the only grape hyacinths I could find and planted them, even though the photo didn't look quite right for the blooms that I remembered so vividly.  I was rather disappointed when they came up in the spring.  They looked like their photo.

Well, I've since learned that "modern" grape hyacinths are Armenian Grape Hyacinths, Muscari armeniacum.  They don't seem to multiply like the old fashioned grape hyacinths do, which may be why modern growers and gardeners prefer them.  This is one "clump" of those modern grape hyacinths, 7 springs later, with spotted geranium (Geranium maculatum) coming up behind it.

Now, granted, I haven't given these grape hyacinths any special care, above and beyond what I've given to the rest of the bed.  No extra fertilizer.  No extra watering.  Still, I suspect I planted 7 bulbs originally in this group...and there are still 7 individual plants.

I like both of the heirlooms better than the modern species.  Added to the official plant roster in 1629, this pictures the Southern Grape Hyacinth, Muscari neglectum.  It has the deep blue blooms that I love, but the foliage is rather limp and formless.  It also tends to reseed a fair amount, which I actually like, but others might not be so excited about.

My favorite of the three, though, is the Original or Northern Grape Hyacinth, Muscari botryoides.  It was first introduced to horticulture in 1576 (!), which just amazes me.  It creates full clusters of neat foliage with soul-satisfying blue blooms.  I truly don't understand why this plant isn't widely available any more - I'd love to have all my beds edged with it!

Moving on, my daffodils range from bright yellow to almost pure white, tall to short, early to late, single to incredibly double, fragrant to odorless - but I find it hard to remember which varieties I've planted and where they are in the beds.  I labeled them all when they were planted, but their labels have suffered the same fate as most, and I can't read or can't find most of them.  I have, though, kept all my old receipts, so I know I could figure it out...but it seems like too much trouble tonight.  If anyone is interested in more about the daffodils I'm growing, let me know and I can do a post about them, specifically - or at least about my favorites.

Last but not least in this lineup of highlights, I've got 2 different hyacinth varieties that I particularly love:  Dreadnought (1899) and Double Hollyhock (1936).

With a double bloom of an intense, luscious, deep blue, I've had Dreadnought in the ground for several years now, in an area where I do absolutely NO extra watering.  It has returned stronger each year.  This is Dreadnought Hyacinth on April 11th....
A newbie to our garden (planted last fall), Double Hollyhock Hyacinth has double blooms of intense, magenta pink which were just beginning to open up on April 11th.... 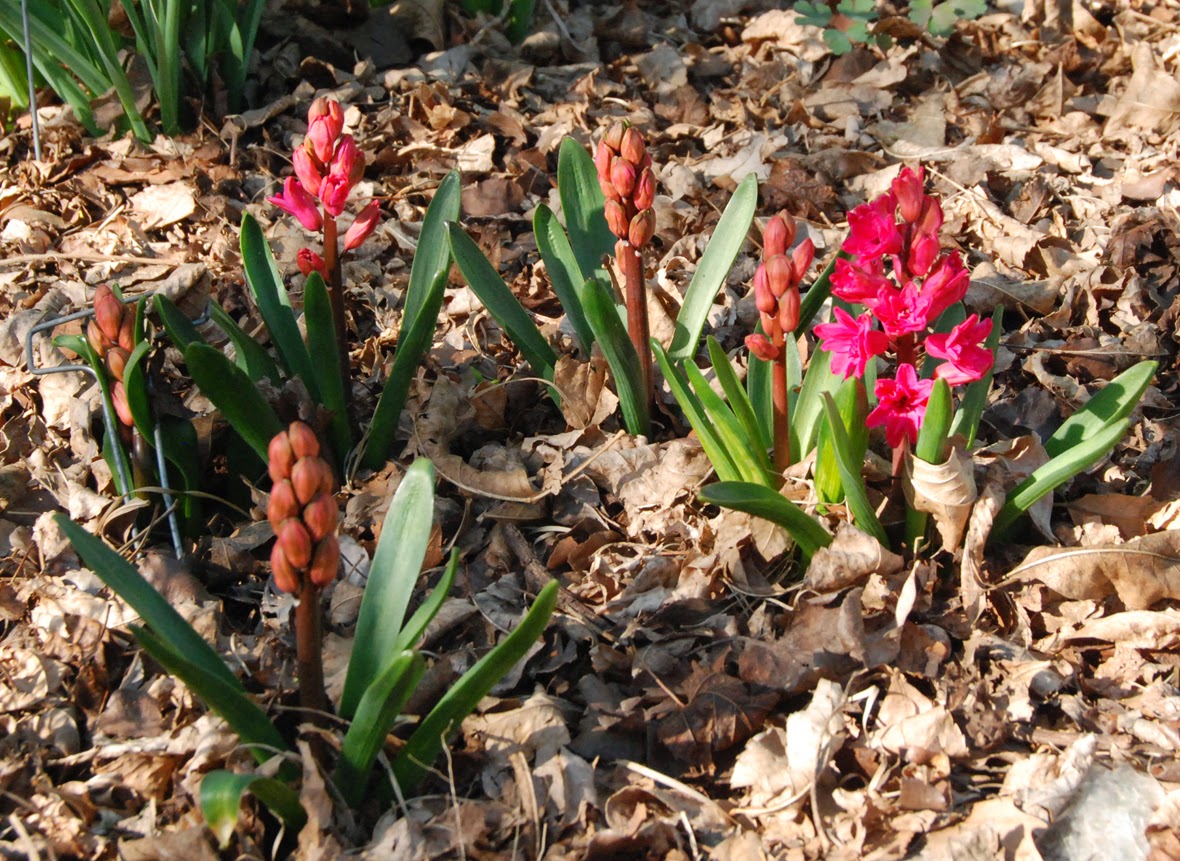 This, then, is Double Hollyhock Hyacinth covered with snow on April 14th!

Luckily all of the plants recovered, suffering no lasting ill effects, as evidenced by this rather over-exposed photo from April 18th.

Enough now.  Bulbs are great fun, but it's time to wrap up this section and move on to the next part of our great garden experiment, the vegetable garden.  I'll meet you over there in a bit.
Posted by Gaia Gardener: at 8:45 PM