The Garden in the Third Part: Fitting In to the Greater World Around Us

Spring starts slowly on the prairie.  With the mid-continental weather tending towards extremes, plants are suitably cautious about putting forth too much green, too early.

As a gardener, I'm itching for green by mid February.  For ANY color, actually, other than brown and tan and and gray and cedar green.  I'm itching for gentle breezes and softness.  The prairie doesn't provide much of any of that in February.  In March, either, to be honest.

Feeding the birds helps.  Cardinals flash such vivid red that I can't help but feel cheered up as I watch them.  Songs start noticeably increasing by early March - and the return of the male red-winged blackbirds triumphantly declaring, "O-Ga-LEEEEE!" from every conceivable perch lets me know that spring truly is on its way.

Of course, giving in to the pull of non-native spring bulbs helps, too!

Do you see it?  Those fuzzy shoots pushing upwards?  Those are the shoots of pasqueflower (Pulsatilla patens).   The hairs help protect the leaves and stems and even the petals against cold temperatures, as does the plant's short stature, hugging the warm earth.  We're actually a bit far south to be in pasqueflower's native range, but I enjoy the fuzzy purple fluffiness of this diminutive charmer anyway.

By March 29th, the blooms were up and fully open.

Now, in late April, the seed heads have already formed and I'm enjoying their soft texture too.  How quickly the season of the pasqueflower passes.

But back to March 12th....  I leave my perennials uncut over the winter to provide seeds and shelter for the birds, overwintering sites for the insects, and protection for the soil from winter's harsh winds.  With spring definitely starting to arrive, I undertook one of the biggest projects of my native garden calendar year - cutting back last year's growth.

On March 12th, here's what the front flower bed looked like after the vagaries of winter this year.

After taking a quick series of photos, I put the camera down, picked the clippers up, and got to work.  After a relatively quiet winter spent sitting more than I probably should, I try not to become a "weekend warrior" with the attendant injuries of doing too much, too fast.  So I work at this first big task of the gardening year a bit at a time, hauling all of the debris off to the brush pile where overwintering insects can emerge at their leisure.  If I remember correctly, this bed alone produced about 15 compacted wheelbarrow loads of detritus.

A bit less than 2 weeks later, on March 29th, the front flower bed looked like this, my "mechanical burn" having cleared off the remnants of last year's exuberance, opening up the soil for the sun's warmth and for the emergence of this year's fresh, new growth.... 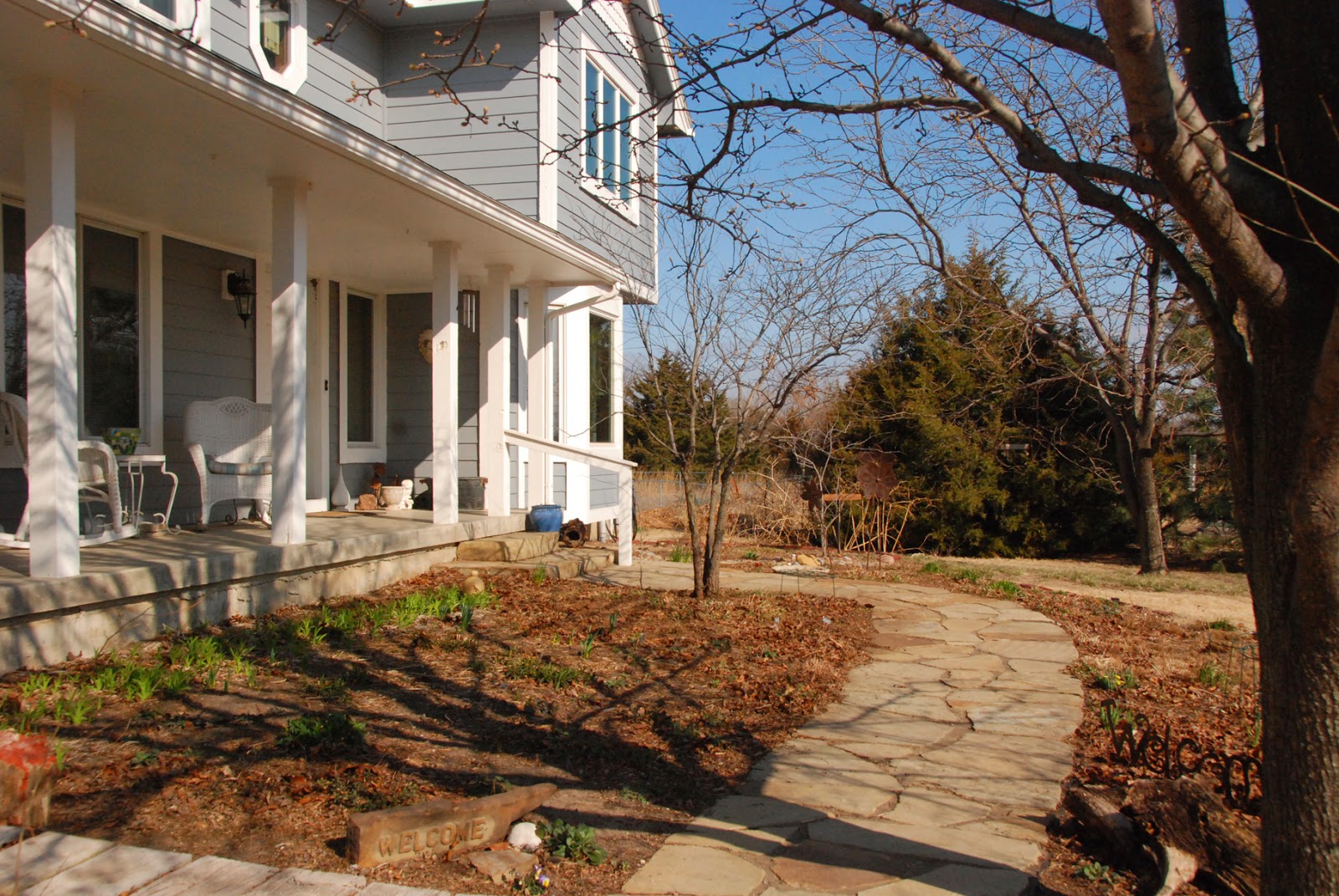 There's not a lot more green yet, but there's a whole lot less brown!  It always amazes me to see how easy it is to brush away the layers of life that make up the prairie landscape.  In some ways, it is such a fragile world.

Meanwhile, in the back courtyard where shade simulates more of a prairie woodland environment, the woodland flowers were just beginning to emerge.  Well, actually, the Bloodroot (Sanguinaria canadensis) had already emerged and was almost done blooming.  Woodland plants are often small, easily overlooked among large, showy clumps of daffodils and bright, shining clusters of purple crocus.  I almost missed the bloodroot blossoms!

Just two days later, all of the petals were gone and the leaves had emerged more fully.  I really enjoy the bloodroot leaves, with their odd lobes, their gray green color, and their softly rounded shapes.

Bloodroot gets its name from its red sap, most easily seen in its roots.  The sap was used as a dye by some of the Native American tribes.  It is poisonous if ingested in sufficient quantities.  Like many woodland forbs, bloodroot leaves will go dormant in mid-summer, reducing the plant's need for water in traditionally dry times.

In another area of the back courtyard beds, two little rue anemones (Thalictrum thalictroides) were emerging.

Nearby, a clump of liverleaf (Hepatica americana) was pushing up out of the ground, flowers first.  The leaves come later - around 2 weeks later, in fact! 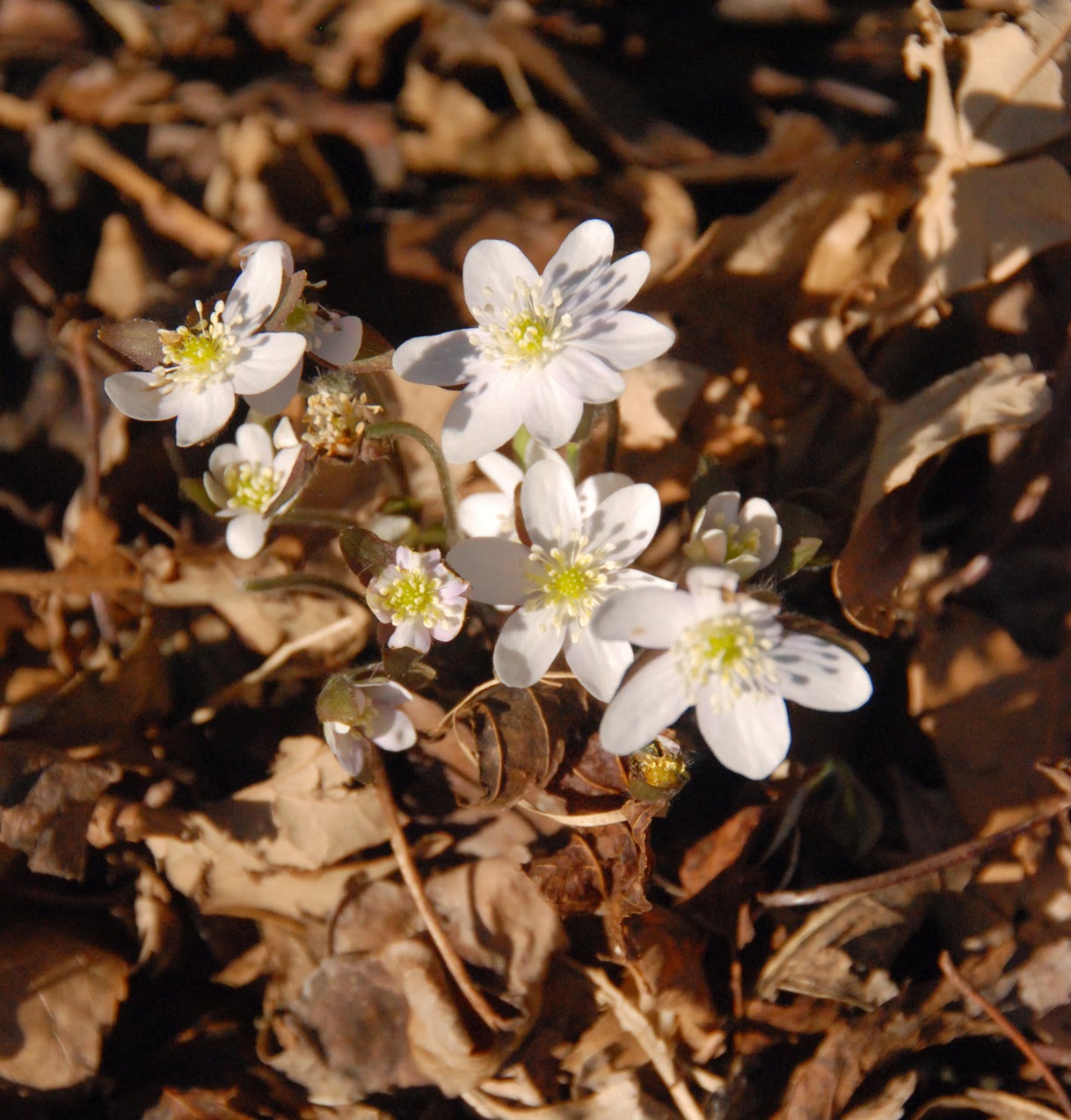 It always amazes me that so many of these woodland flowers essentially emerge with their flower buds opening at the same time - or even before - their leaves unfurl.  "Time's a-wasting, folks!  Got to get this seed production started NOW!"

I am going to have to stop here for now - it's late and I need to get to bed.  The upcoming week is going to be full and I'm not likely to be able to blog again for a while - but don't forget the native wildflowers!  I've only managed to bring you up to the end of March so far.  In the chronology of the spring garden, the daffodils and hyacinths have just started blooming, the purple crocuses are in their full glory, and the spinach is just starting to germinate in the glass light shade "cold frames".

We'll resume our springtime travels through time in the native plant garden when next we meet!  In the meantime, happy gardening!
Posted by Gaia Gardener: at 11:02 PM

I miss bloodroot...so prevalent in the Indiana woods of my childhood. Too dry in my area to entertain it here so I'm glad it makes it down in your area.

I don't know what I'd do without the birds during winter - I just long to see life of any kind out there! The pasqueflower is beautiful, I don't think I've ever seen it before! It is so nice to see some signs of spring finally. I don't know if I have any spring ephemerals in my yard, since we recently moved there, but I've been searching!

I enjoyed seeing your early spring photos. Thanks for identifying the rue anemone in my photo.

I clear my flower beds in March on different days, like you do, and have a place where I can put the piles of stalks for the insects to emerge from when ready as well.

I am tickled with how quickly things are growing now that most is up. The lead plant, New Jersey tea, and milkweeds are even coming up now!

Pasque flower is such a great early spring bloom. A friend gave me some bloodroot last year, and this year it bloomed for me for the first time.

Jason, I love bloodroot too. Not only are the flowers refreshing in the spring, but it can handle dry shade and the leaves are such an attractive color and shape.

Prof, the bloodroot was a little tricky to get established and it didn't bloom well for several years, but now it seems to have taken firm hold. It made it through the drought and heat with minimal watering, so I think it's up for almost anything!

That said, the area that I have for dry shade plants - while originally prairie and full sun - is now sheltered by 30 year old lilacs and a couple similarly aged trees. From photos, I'd say you're a decade or more behind me in that regard!

Indie, I'm late in answering comments - but I suspect you'll have spring ephemerals in your new yard soon...if you haven't planted some already!