A Time to Look Both Ways, Backward and Forward, As We Cross Into 2012

It's the time of year when it seems necessary to look back over the past year, and then right to look ahead towards the year to come.  After reading multiple such posts on other blogs over the past few days, last night I gave into temptation and looked back in my own journal to remember 2011 in our yard and gardens in SW Sedgwick County, Kansas....

The first day over 100 degrees was....(drum roll, please!)...May 9th, when it reached 101 on our sheltered breezeway.  (The average high temperature for that date in Wichita is 74 degrees.)  This was definitely a harbinger of things to come.

We had 53 days over 100 during the year, breaking the all-time record here in the Wichita area.

In my journal, I started whining about unseasonable heat and the lack of rain back in April.  Little did I realize what was in store for us over the next several months!  By August, I'd quit complaining (for the most part) and start cheering on the 100 degree days.  Heck, if we were going to suffer through the horrible heat, we might as well set a record!  And we did.  Several, in fact.

(According to The Wichita Eagle yesterday, Wichita also set a record this year for the widest range between high and low temperatures recorded here for any single year so far:  128 degrees.) 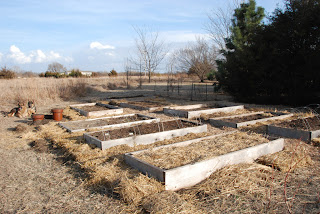 As far as the garden itself went....  We started cleaning and preparing the vegetable garden in February, then did our first seed planting in early March.  Despite my weather whining in April, we had our best spring garden ever.  We're still feasting on the broccoli and cauliflower that I harvested and froze from that spring bonanza.

The summer garden, though, was another story.  I put in some ridiculously large number of tomato seedlings for the two of us (at least 16) and they all took hold nicely and looked great as of May 31st.  I should have had tomatoes falling off the counter and rolling out the kitchen door.  However, out of all of those plants, I got one regular size tomato and 3 cherry (grape) tomatoes in early July.  The plants just didn't set fruit in the scorching heat that never seemed to quit.  Despite the fact that I stopped watering sometime in mid July, most of the tomato plants survived the summer and started to set fruit again in the fall, but a fairly early frost literally froze our hopes on the vine.  We just weren't meant to have tomatoes this year.

So most of our "gardening" this summer ended up being focused on plugging buffalo grass in an attempt to get some sort of decent lawn growing.  (Just for the record, growing lawn grass is NOT really gardening in my book.) The plugs we put in during early July look like they've taken hold pretty well.  The plugs we put in later look...pluggy, even now.  We'll have to see how they look in April or May, as the buffalo grass greens up and starts growing again.

By the time fall got here, I didn't want to step outside to do more than push a camera shutter button.  The thought of a fall garden was simply disgusting.

But it's been a couple months now.  We've had a bit of rain.  The heat of the summer is simply an unpleasant memory.  I can finally start thinking about what I want to do as the weather warms up in a couple months.  Hope, after all, springs eternal in a gardener's breast. 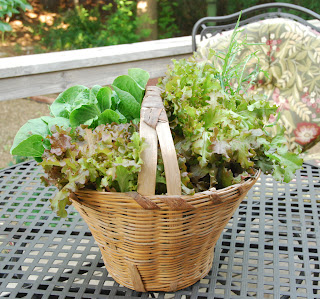 1)  I'm going to start lettuce seeds indoors, sometime in January, since I learned last year that if young lettuce seedlings experience temperatures below 50 degrees F., it encourages early bolting when hotter weather comes.  Once the young seedlings have more than 3 or 4 leaves, low temperatures apparently don't have the same effect.

2)  I AM going to be home in early April, when the asparagus starts coming up, and again in early June, when the peas start bearing, so they won't all go to waste in the compost pile like they did this year. 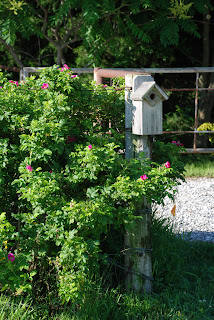 3)  Any time now, we are going to put up the bluebird nest boxes that have been ripening quietly in the garage for over a year now.  They'll do a lot more good out on fenceposts where the birds can actually use them!

4)  If the weather gods are good to us and we have decent harvests, I am going to work harder at finding new recipes to utilize our home-grown produce.  Then I'm going to actually try them out!  The recipes I've got are good, but limited, and I know there are many more, wonderful ways to tantalize our taste buds as well as nourish our bodies.

5)  I am going to do a better job of getting our beds well mulched, so that we're ready for the summer baking season ahead of time and don't, hopefully, have to try to play catch-up as much as we did this year.  (I've already got the chopped leaf mulch piled and ready for deployment - its lack was our limiting factor this last spring.)

6) And I am going to continue keeping the garden journal that I started last spring and abandoned in June, when the weather was so discouraging that I didn't have the heart to go on.  I used it to note tidbits from magazine articles, timing for plantings and harvestings, wish lists for purchases and projects, and all sorts of other fun stuff.  While I only kept the journal up for 4 months, I'm finding lots of little notes in it that are getting my blood stirring as I think about getting started this spring!


And that's enough for now.   The catalogs are coming in and the winter season of dreaming is upon us.  Here's wishing all of us a healthy and happy year in 2012!

Tis the season of reflecting and planning! My plan is to actually record some things like rainfall amounts and temps. .I had thought that our first day over 100 degrees was really early May..and it was according to your calculations. I am so hopeful for a more seasonable summer!! I can never help myself while going through catalogs. .and already have a number of pages dogeared and items circled :-) Bet most gardeners are the same!! Happy New Year!!

So much last year was truly disappointing due to weather. We had one month of no rain, but were very lucky compared to other parts of the country. Your record setting was amazing. I hope that does not repeat. I am fearing next year a bit. Here we are jumping between light snow and seasonably warm conditions. What I see for March maybe lake effect snows which are damaging. Who knows, but it seems we will have bad weather to welcome in spring. I really hope what happened last year to the South, West and Midwest does not happen again. I plan to photograph each day if I can next year to see how the weather images and record the temps too. Not a scientific approach, just an observational one. Glad you popped in on GWGT and got in on the discussion.

The spring crops were good. Hoping for another round of fresh salads but really hope the heat holds off this year. I'm with you on the mulch. Just gotta have it to help the garden. I need to pick something that can handle the wind at the end of the berm. Something about the way the wind whips around our fence there just obliterates anything delicate. Here's to learning and improving for the next garden.
Happy New Year!

Melanie, I haven't cracked a seed or gardening catalog yet, but I'm feeling the pull. I'm making myself clear away the remnants of Christmas first!

GWGT, your plan to photograph each day sounds both interesting and ambitious. Good luck with that!

Here's hoping for all our sakes that the weather returns to more normal patterns in 2012!

Sherlock, I wish you luck on finding the right mulch for your windy spot. We're pretty exposed everywhere and I've found that, for most places, a layer of chopped leaves with a thin layer of wood chips on top does pretty well. For the really windy spots, though, even that doesn't hold on.

At the same time, as I've added more perennials, some areas are holding leaf mulch without the overlying wood chip layer, even in areas that regularly blew clean 4 years ago. I'm not sure if the perennials are decreasing the wind strength, the looser soil is creating more drag, or some other factor is at play. Whatever it is, I'm rejoicing as I notice the change!