Just a little over a year ago, I brought home a 16 month old German shepherd male that I'd found through a classified ad in the paper.  He was wild and undisciplined, the result of having spent most of his young life (and all of the last 4 months of it) in a kennel with little human or canine interaction. 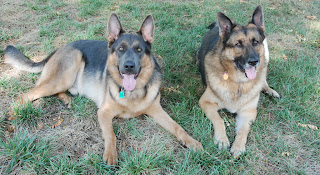 Between Becker and Greg and me, we've absorbed Blue into our home and into our lives.  (That's Blue on the left, Becker on the right.  This photo was taken near the end of August.)  Now it's hard to remember the wild thing that nearly pulled me off my feet during our first walk together, that tried his best to eat the cats during our first attempts to introduce them.  He's still a hard-headed adolescent at times, but he's an integral part of our family pack.  Like Becker, he almost feels like an extension of me as I go about my daily routine.

And he's not here tonight.  He's in a kennel at the Wichita Emergency Veterinary Hospital with an IV in him, replacing fluids that he's lost over the last few days, awaiting exploratory surgery in the morning.  On ultrasound this afternoon, they found a mass between his spleen and bladder, complete with (probable) enlarged lymph nodes in the area.

A few days ago, Blue started vomiting copiously.  Huge amounts of slightly digested food.  He continued drinking...but he continued vomiting too.  My initial reaction that this was a normal stomach virus or a reaction to something he had eaten morphed into real worry by late yesterday.  An obstructed bowel seemed probable, although he showed no sign of the pain that normally accompanies an intestinal blockage of that nature.  This morning Blue and I were on the way to our vet as soon as I could get him in.  Their x-rays were inconclusive, so they arranged for us to head to the local specialists for the ultrasound.

Gaia, wish I could see the radiographs. A "mass" sounds like tumor, but that'd be fairly unusual in a German Shepard that young. Hope the surgery goes well.

Oh, bless your heart!! They become like children don't they!! Hoping that by now you know something!! Prayers your way!!

Thanks, Jim. I appreciate the thought very much. I talked with the surgeon this morning; they may well be in surgery as I write. Blue was scheduled to be his last surgery today. Having only one surgical suite, he wanted to do his sterile orthopedic procedures before getting into who-knows-what with Blue.

Hug!! Hang in there.

The surgeon has called with the results: a cystic mass associated with the small intestine. He removed the mass and about 5 cm of intestine and is sending the mass off for pathology (of course). Meanwhile, no reason at this point that Blue shouldn't be home in a couple days! I'm feeling quite relieved.

Thanks so much, everyone, for your well wishes!