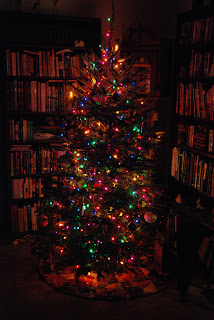 Now that our children are fully launched into self-reliant adulthood (and there are no grandchildren on the horizon), we've started encountering a thorny question each year as we look towards Christmas - how should we handle giving each other gifts?


Our son, Sean, is an affirmed anti-materialist and flatly doesn't want "stuff".  He is continually trying to pare down his possessions.  He lives in a (series of) smallish apartment(s) in a big city and he prefers to be able to move between them with the least amount of hassle.

Jess, our daughter, loves gift-giving and receiving, loves to create beauty around herself, and finds her home a source of great comfort.  Holidays are particularly special to her, and gift giving is an important part of the feeling of love and family at those times.

Greg's never been a big one for Christmas or Christmas gifts - his philosophy is that he likes to give gifts whenever he want to do so throughout the year, rather than at a culturally determined time of year.

And then there's me.  I love Christmas cards - both sending and receiving them.  I've moved so much throughout my life that Christmas cards are a wonderful way, at least once a year, to feel connected to friends and family that I rarely see anymore.  And I love to give multiple small gifts - the sort that can really lift the spirit if you happen to hit upon a particularly lucky choice, but that leave neither giver nor receiver feeling bad if you totally miss the mark.  The sort that can be re-gifted without angst, but hopefully will give the receiver enough pleasure and/or use that he/she wants to keep them.  Most of the time, that's the sort of gift I'd rather receive, too.

(Anyone else sense a gender issue in my discussion here?!  LOL!)

Sean has suggested, again, that we don't exchange gifts at all.  Greg would happily go along with that.  Both Jess and I would prefer to continue with the usual gift giving tradition.  I've seriously debated just having Jess and I exchange gifts with each other, but that feels very Scrooge-ish.

It seems so ironic to have a tradition that is meant to bring nothing but joy and happiness causing such annual angst...but no one has ever said that the human heart is simple! 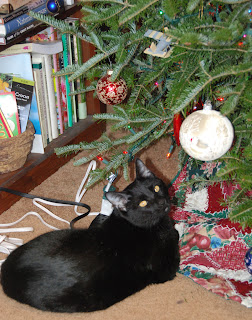 When all's said and done, I think Ranger may have the appropriate last laugh here - as he lounges next to his favorite indoor "chewy play-toy," the electric cords!  I suspect we'll figure it all out somehow!

I think a lot of families face the same question.
My family "phased" out gift giving. One year, the siblings stopped giving to each other; another year, the aunt and uncles stopped giving to the nieces and nephews (except for to their God children which we set the age of 18 as the last gift year). We buy something for Mom and Dad and they give us each some cash and sometimes a special photo or something (like an arial shot of the farm one year which we each loved!) They do the same for their grandchildren who are all grown now too. The great grandkids still get a small toy.
My hubby's family is all about the gift opening. It's total chaos and being at the oldest end of his siblings, I'm sure we'll be involved in gift giving for many years to come and the nieces and nephews just keep coming (no kiddos in our house other than my hubby.) We did go to the sister/sister-in-laws and brother/brother-in-laws drawing names.
My best friend's family went to all adults drawing names this year and getting/giving just one gift. I acted as the Santa helper and divided them up and sent out the emails as they're doing it in secret until Christmas.
Another friend has an exact amount and they buy gift cards only and play a game to see who gets which one. They try to buy gift cards from local places that are new or interesting.
My hubby and I don't buy each other gifts on Christmas. We hold Christmas Eve as our special time together and usually feel we've received plenty through the year when it fit the moment.
Your son who does not want "stuff" still needs to do stuff. Go for something he can use up.
Just some things we've encountered/seen. The possibilites are endless. It's just about finding something that feels good for your group.
Good luck!
By the way, I go all out on the Christmas card part too.

Thank you so very much for those wise comments. I loved the idea of the aerial shot of the farm as a gift one year!

We've never been into Christmas morning chaos - our tradition is to write special gift tags with "clues" as to what the gift is inside, so each person has to guess what they think the gift might be before opening it. We slowly open the gifts one at a time so we can all watch and try to guess what the gifts are ourselves. There's often as much appreciation over a clever clue on the tag as there is about the gift!

We tried the gift card concept with my husband's family last year, but there weren't enough of us to really get anything fun going.

One year my mother-in-law had the idea to draw names, then have us all go to the local gigantic antique mall and buy a gift (max of $20) for our recipient. We then did a "Dirty Santa" drawing. That was actually a lot of fun!

It all gets further complicated by the fact that most of us live far apart...and we can't all get together every year. So each year is a little different.

If we come up with some really unusual solution, I'll be sure to post it!

We have done a dirty Santa the last few years with my wife Cindy's family. We limit the cost. Two years ago we bought gag gifts (male and female) lace covered toilet tissue holders, pink and black. You could imagine how they felt. But at the end we gave out good gifts to those who ended up with the gag gifts. However some took it wrong and I ended up with the toilet paper holders last christmas without a "good" gift.
lol. And of course we should remeber the reason for christmas.

I share the angst...still have an older daughter at home, but the free abandon of Christmas gifting seems so much in the past. For young children, a day like no other, but for adults, just another party to get ready for, another house to decorate, on top of daily life. I think I need to reconnect with the real reason for Christmas. Humbug.

So I fly out to see them, make them cookies they would never eat otherwise, give them a calendar for the new year, and we go skiing together. It's simple, it's what they want, but there is no traditional gift opening morning like we had when they were growing up, or when I was either!

They each get me one small gift, and I am surprised at how thoughtful they are now as grown men : ) And they get some wine or artisan beer for their stepdad.

Thank you all so much for your comments. It's very helpful to hear that it's not all Norman Rockwell moments for others, either. (I DO know better than to buy into such stereotypes - at least intellectually - but sometimes I can't seem to help myself!)

It looks like our son and his girlfriend won't be able to join us for Christmas after all, so the holidays will be pretty quiet this year. Jess has suggested that we not put up a tree, since it will just be the 3 of us, and after initially scoffing, I've decided that she's right.

So I'm going to do something I don't think I've done before - do some decorating WITHOUT a Christmas tree (We've done the tree with no decorating before, but not the other way around.)

And I'm simply going to go day-by-day, deciding what I feel like doing as each day comes. I have high hopes for a relaxing, enjoyable holiday season this year.

My family has adopted that same attitude of not wanting "stuff" but we all still want to give gifts. That's why this year we decided to attempt to buy things that are useful for one another (as well as something we hopefully want) instead of just giving something for the sake of giving a present you know?

My oldest daughter is an art student who is consistently broke and in need of supplies so I bought her this easel art set and sent her a card with some cash.

My son is a semi-professional musician who spends most of the year on the road so we bought him a new acoustic guitar we know he had his eye on as well as a digital photo viewer so he always has pictures of his family and friends on the road.

My youngest daughter has always been the practical one, she's studying to be a lawyer and might be the only one we actually see on Christmas. She is always the toughest so we decided she will be getting money and the non-practical gift of her choice because she could use something fun!

My husband and I decided that instead of exchanging gifts he and I will just take a trip to Hawaii in February, Merry Christmas to me!

I wouldn't worry about it, it might be built up to be the main event but aren't the holidays really about just catching up with your loved ones?