Happily Sharing Your Garden With Wildlife

Yesterday I had the great pleasure of giving a talk at the Kansas State Extension Master Gardener conference. The title of my presentation was "Happily Sharing Your Garden With Wildlife." A couple of the attendees requested a copy of the "morals" that I listed as a part of that presentation. Since I hadn't made that list into a handout, I promised to post it here so that they could download it, or refer back to it, whenever they wanted it. Thank you all, for being interested in having the list to refer back to!

So, here is the list of "morals" I put together to help you happily share your garden with wildlife.... 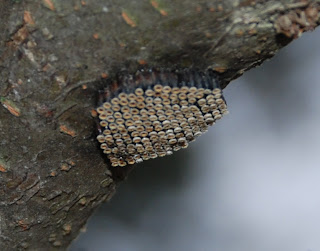 Moral #1: Don't be too quick to judge an unknown [such as an insect or an egg mass] as a problem. Take time to observe and learn.

When I found an egg mass like the one to the right one February morning, I was tempted to scrape it off the tree branch right away. I was convinced that any mass of eggs like this would be plant-eaters and therefore probably destructive in my yard or garden. Instead of doing that, though, I went back inside and searched on the web, trying to identify the eggs. I was able to do just that, and I learned that these are eggs from the wheel bug, an excellent insect predator. If I had destroyed the mass (and the others I found throughout the winter) I would have had many fewer predators in the yard...and many more pest insects. 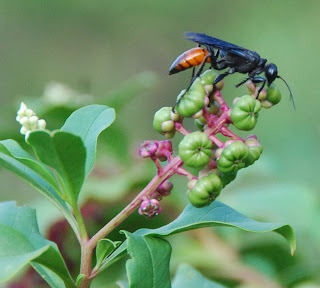 Moral #2: Don't be too quick to reach for the insecticide, even when something does seem problematic.

The wasp to the right is a cutworm wasp. She's one of the solitary, ground nesting wasps that also pollinates flowers as she feeds on their nectar. The males of many solitary wasp species hatch out first and then guard the area where their natal burrow was to be the first to mate with the newly emerging females. Males don't lay eggs and therefore they have no stingers, but they look scary and often buzz human "intruders." The females are capable of stinging, but generally won't unless they are directly handled or otherwise really interfered with. Cicada killer wasps are another of the solitary ground wasps who follow this life cycle pattern. 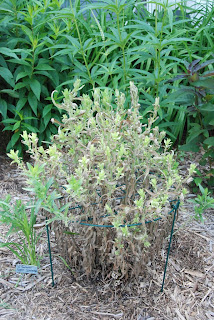 Moral #3: While planting and designing, plan for some insect damage. Learn to tolerate the occasional "ugly." 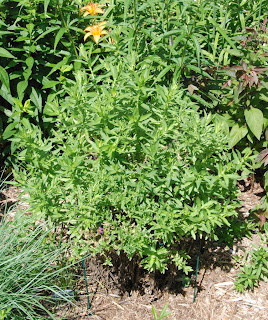 To the left is a photo of a New England aster infested with lace bugs. The photo was taken on June 3, but I didn't spray or do take any action at all (except to snap a photo), assuming that nature would take care of the problem. Sure enough, when I looked carefully, I saw ladybug larvae and young wheel bugs, both predators. To the right is the same plant on June 23, 20 days later. It wasn't necessary for me to take any action - the wheel bugs and ladybug larvae handled the lace bugs better than I or any insecticide could have. 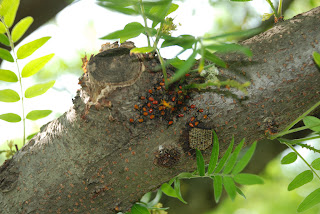 Moral #4: Native plants belong. They not only thrive themselves, they allow many animals to thrive along with them. Blooming and fruiting cycles are coordinated with native animal life cycles. This helps keep local ecosystems - and our gardens - healthy and alive.

Above is a group of wheel bug nymphs hatching from their egg cluster on the underside of a honeylocust branch. The hatch of these young predators appears to be timed to coincide with the blooming of the honeylocust (Gleditsia triacanthos) and therefore with the corresponding influx of pollinators that will serve as food for them. 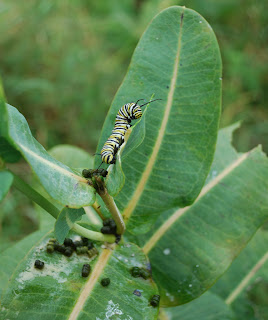 To the left is a smooth milkweed (Asclepias sullivantii) with a monarch caterpillar feeding on it. The plant is definitely looking much the worse for wear, but it hasn't really been damaged at all, and as soon as this caterpillar pupates, a new monarch butterfly will have joined the world.

Other milkweeds besides the butterfly weed (Asclepias tuberosa) are wonderful monarch plants, even if they aren't as showing as their lovely, orange-flowered relative. 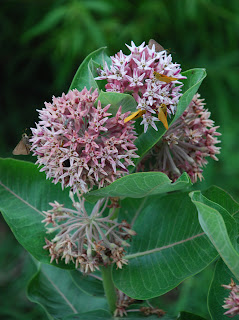 Moral #6: Wildflowers are generally native perennials - although they may be "out of place" where they are growing. Obnoxious weeds, though, are usually exotic invasives that create problems and take up a lot of space while providing few or no benefits.

To the right is a common milkweed in full bloom (Asclepias syriacus) with many different skippers and even a fly feeding on it. Common milkweed is a great example of a wildflower, a native perennial, that is sometimes considered growing "out of place" but is never an obnoxious problem in the landscape. Bindweed is an example of an obnoxious weed. Native to Europe and Asia, it takes over large areas and provides little or no benefit to local communities of animals.
Posted by Gaia Gardener: at 1:55 PM

Good for you to be teaching some!! Sounds like you have lots of good advice. I got a pkg of mismarked milkweed seed..and think it must be the one you have pictured. It didn't bloom this year, but the plant has grown well. I have one tuberosa plant that is doing well finally. .and all of my seedlings that I started last winter are doing well, so we'll see what type of milkweed they turn out to be! I did plant some parsely this year, the dill never sprouted in the heat and drought. Maybe next year!

Great post Gaiagardener...Morals to live by and I expecially liked the before and after picture of the plant left alone.

Thanks, Melanie, I really enjoy sharing the things I've learned (often the hard way) with other folks.

It doesn't really matter what species of milkweed you have, as far as the biological importance goes. Monarchs will use any milkweed species, as will many other insects. I look forward to hearing about what type your seedlings turn out to be.

ProfRoush, thank you! I really enjoyed getting to talk with you up in Manhattan last Friday and I hope your talks on roses went well.

I have at least one more before/after post that is just as dramatic. Maybe I need to take the time to put that one up too.

That is a great list. If one can follow those, they'll be amazed at what can happen in the garden.