A Gift Twice Over - A Dying Wren Leads to Sheltering Monarchs

Ranger, our black cat, came running up to the open kitchen door tonight, carrying something in his mouth. Greg and I scrambled to intercept before he dropped his (potentially alive) probable mouse inside the house. Yes, sadly we have experience in these matters. Unfortunately, we didn't succeed in cornering him until he was under one of the kitchen chairs.

At which point he dropped the (still alive) house wren that he was carrying.

Expecting it to shudder and die at any moment, I gently picked up the little bird and cradled it in my hand. I could feel it breathing, but it didn't struggle.

Without any expectation of the injured bird surviving, I carried it out to the draw, leaving all of the dogs and cats back at the house. I laid it gently in a clump of grass near a tangle of vines where I've seen wrens many times before. If it had to die, at least it would die in its natural surroundings.

As I walked back towards the house in the twilight, I noticed several monarchs fluttering around one of the willow branches, swaying in the wind about 10' above my head. Lazily watching them, I noticed a couple more in the same area of the tree. Looking more closely now, I saw a small cluster of about 10 gathered together, settling in for the night. 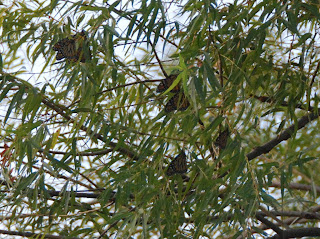 After running back to the house for the camera, I followed a few more monarchs to a second, slightly larger cluster. Every time another individual joined them, many would open their wings as if in welcome, then close their wings and almost disappear into the darkening silhouettes of the willow leaves. 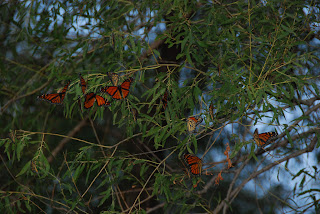 Following his natural instincts, Ranger brought us a tragic gift tonight, but in trying to return that gift to its natural place, I received another gift of grace in sharing the evening ritual of the monarchs. Nature, in both its beauty and its harshness.
Posted by Gaia Gardener: at 5:57 PM

What a sight to see. You are so lucky to see something like that and to have beautiful images to savor.

What a great experience!! I have never seen a swallowtail around our place and have been so eager to have one. The other day as I was walking back to the house while talking to God, a black swallowtail flew right in front of me, as if God was saying. .see it was MY answer to prayer.. and to confirm it sent the gift of the swallowtail. Have a beautiful fall.

My most memorable monarch fall migration story is from my first year at college. I went to a small school in Holland, Michigan, which took me far away from home. One of my most luminescent memories of that first fall away was walking down to the small central park late one afternoon and finding many of the trees and shrubs simply loaded with monarchs, resting for the night. There were thousands and thousands of monarchs there for almost a week - truly magical.

Melanie, I'm glad you finally got to see a swallowtail! Plant some parsley or dill next year, DON'T remove the caterpillars that will feed on it, and you should see many more!

How great to find a group of them resting for the night. I love the part about them opening their wings as if to say hello. I've really got a lot of butterflies in the garden right now. They are all over my sedum autumn joy and the salvia.

Thanks for the plant recommendations. I'm thinking the phlox is a no brainer.

I did have male and female holly bushes. They just weren't happy here. So it goes. I'm going to harvest all the remaining "good" parts of the holly bushes for this Christmas and they'll come out after that.

Agastache sounds so good, but I keep reading how it doesn't come back forever. Still time to decide. Thanks for sharing.

Put a bell on your gd cat!

Anonymous, it would be nice if you'd identify yourself before making a negative comment.

That said, we've tried to bell him, but he doesn't keep collars on for more than 2-3 days.

What a wonderful story! I've never seen a group, except at Longwood and other public gardens.

For the first time, we sheltered caterpillars this year -- a monarch and several black swallowtails. It was a joy! Who knew caterpillars could be such fun! I did several posts, including a quick film at my blog www.lettherebegarden.com.

Dill and parsley for the swallowtails, milkweed for the monarchs. Grow plenty. They are voracious!

Tricia, I plant parsley just for the swallowtails, since I don't usually use it in cooking. I figure I've been successful with it if it's been eaten down to the ground by caterpillars! It actually makes a very pretty green filler scattered in my perennial flower beds.

Glad you found monarch caterpillars too! Which milkweed do you grow? Around here, I find the most caterpillars on showy milkweed (Asclepias sullivanii).