Certain plants seem to create large communities of insects and other wildlife within my garden.  I thought I'd do a series on a couple of these species, starting with Turkey Tangle Fogfruit (Phyla nodiflora).  As I've gone through my photos from last year, I realized I've got pictures from at least 23 different species of animals using this species in 2018 alone - and that's just the number I captured with my camera.  I know there were animals using it that I wasn't able to capture on film (like swallowtail butterflies).  I'm equally certain there were animals using it that I simply didn't see.

Fogfruit is not a showy species to my eye.  Although some people really like its dainty flowers, to be honest, I find this plant rather blah visually.  It is, however, a powerhouse for supporting pollinators and other insects and, as such, has earned a place in my yard whenever possible.

Essentially a groundcover, fogfruit grows around 8" tall.  About 3 years ago, I started out with 2 plants in gallon containers, planted 2' apart.  The fogfruit now covers an area that is about 6' X 8' - and it would be happy to be out in the driveway and into the street, too, if we didn't keep it trimmed back.  On the plus side, fogfruit manages to hold its space fairly well, once established, and doesn't need much of any care.

The first photos I have of the animals it harbored last year are from mid-May.

Here is a small spider that I saw on May 15th, then didn't see again all year.  It's a pretty little thing which the great folks at Antman's Hill on Facebook helped me to identify as an orbweaver, Gea heptagon. 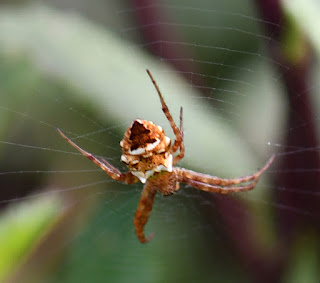 On the same day, I captured a photo of this little syrphid fly (Toxomerus sp.) nectaring at one of the fogfruit blossoms. 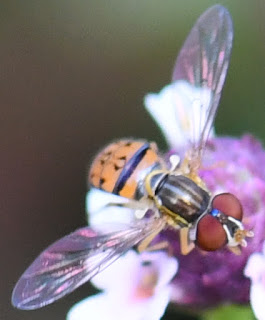 Like others in this genus, the larvae of this fly feed on aphids, thrips, and small caterpillars throughout the garden, so it's nice to see the adult visiting.

By June 10th, the action was heating up.  There was this cute little orange "teddy bear" nectaring, a bee fly (Chrysanthrax cypris). 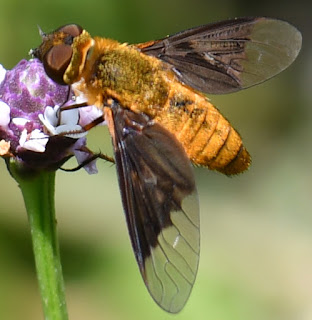 Cute as this guy is, its life cycle is less cuddly.  Flies in the Chrysanthrax genus are external parasitoids on the cocoons of some solitary bees and on the cocoons of tiphiid wasps, which are themselves predators of beetle larvae.  The "balance of nature" is sometimes hard for me to feel comfortable with and gracefully accept, but I do my best.

Throughout June and again in August, I have photos of another bee fly (Exoprosopa fascipennis) nectaring at the fogfruit. 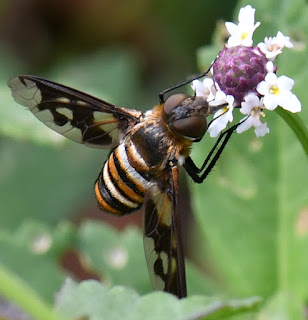 Again, I find this an attractive little creature, but again its life cycle is rather fearsome.  The bee flies in Exoprosopa feed on the cocoons of many different kinds of wasps, including the tiphiid wasps mentioned above, spider wasps, and a group of solitary wasps known as sphecid wasps.

Speaking of wasps, in mid June, this scoliid wasp (Scolia nobilitata) was enjoying the fogfruit nectar, too. 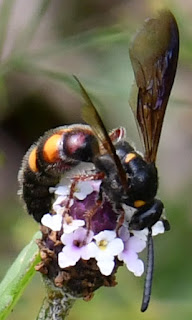 Scoliid wasps are parasitoids of beetle grubs, especially the grubs of May beetles.  The females dig down to the grub, sting it to paralyze it, and deposit on egg. When the egg hatches, the wasp larva eats the perfectly preserved beetle grub.  I like my grub control to be natural (even if it is rather gruesome that way)!

Since both the bee flies and the scoliid wasp were nectaring at the same time on the same plant, it is possible that one or the other of the bee fly species parasitizes this scoliid wasp species, following females as they leave their feeding ground and search for beetle grubs to parasitize.  There is so much about these little guys that we simply don't know, even things as basic as which bee fly species parasitizes which wasp species.  Often these predator/prey relationships with parasitoids are very specific, confined to just one or two species, or perhaps between two particular genuses.

Moving back to less gory lifecycles, a couple days after photographing the pretty wasp above, I started capturing images of butterflies and skippers.  First was this Fiery Skipper (Hylephila phyleus) on June 16th. 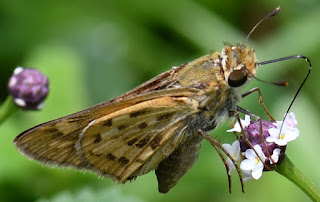 Since the larvae of fiery skippers dine on grasses such as St. Augustine, this species is relatively common.

On June 22nd, I photographed the first Phaon Crescent (Phyciodes phaon) of the year, although these photos are from later in the summer. 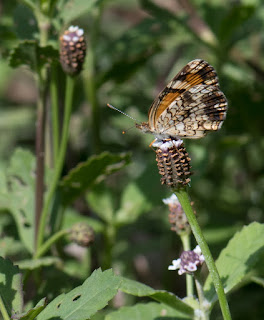 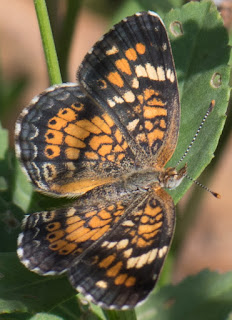 These cute little orange butterflies utilize fogfruit as their larval plant, as well as obviously nectaring on it.  Since I see quite a few of them, I'm pretty sure that my little patch of fogfruit is producing phaon crescents, but I've never actutally found one of the caterpillars.

Something sure likes to eat the fogfruit leaves, though!

I spotted this dainty damselfly hanging out around the fogfruit several times last summer. It's the only damselfly or dragonfly species that I photographed on the fogfruit last year, and the folks at Antman's Hill identified it for me as a male Rambur's Forktail (Ischnura ramburii).  That makes sense, as I've seen the (orange) female Rambur's Forktail in the yard multiple times, although I've never photographed one on the fogfruit. 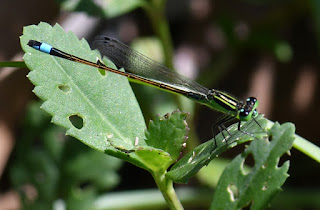 There were several more wasps and bees over the course of the summer, including this potter or mason wasp on July 20th, ..... 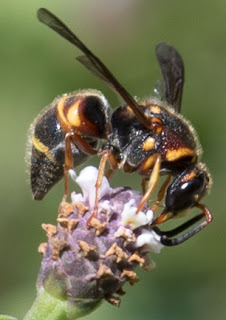 ...and this paper wasp (Polistes metricus) on August 10th. 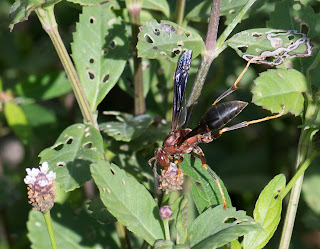 I actually don't see many paper wasps in the yard - which is fine with me.  Instead, I see lots of solitary wasps, who are generally much easier to share space with.

One of my favorite finds was this cute little black leafcutter bee, the Carpenter Mimic Leafcutter Bee (Megachile xylocopoides).  As the name suggests, this stunning black bee with the fluorescent blue shimmer is considered a mimic of larger carpenter bees, specifically the Southern Carpenter Bee, which I also saw in my yard last summer. 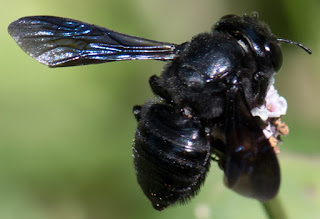 Note the long hairs on the underside of the abdomen?  That's how you can tell it's a leafcutter bee - at least if it's a female.  Female leafcutter bees carry pollen in those hairs, often giving them a potbellied appearance.  This gal was apparently feeding herself, not gathering pollen for future offspring.

On August 8th, I was able to capture photos of a Barred Sulfur (Eurema daira) visiting... 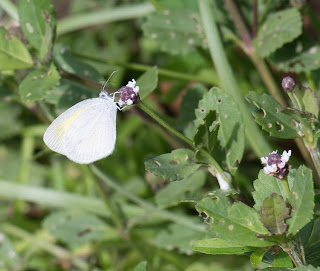 ...and if you look closely at the stem a few inches below the blossom, you'll see the wad of spittle that signifies a spittlebug nymph feeding - yet another insect species utilizing the fogfruit. 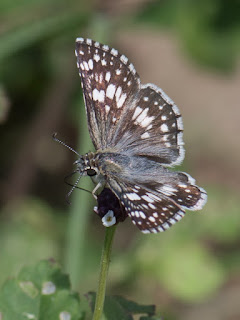 Apparently, most skipper larvae fold and sew leaves together to make tent shelters for themselves, so don't be too quick to destroy any such structures you might come across in your garden.

Of the 23 species I photographed on my Turkey Tangle Fogfruit in 2018, the above photos were the most interesting and/or the insects were the most photogenic.  Rounding out my 23 species were 4 more species of flies, 2-3 species of small beetles, a honeybee, and two other bees I haven't been able to identify yet.

Like the plant they were visiting, most of these animals aren't large or particularly beautiful.  They are the everyday denizens of our gardens, busily living their lives and often feeding other animals in the process.  To me, each of these species has the right to exist, the right to its place on this Earth, just as much as any other species has that same right.  I hope that, someday soon, we humans can learn to coexist with the other plants and animals on this planet, instead of needlessly and carelessly destroying them.
Posted by Gaia Gardener: at 9:53 PM

Extremely interesting and informative! Thanks so much for sharing your photos and looking forward to the next installment!