This Week in Pest-Controlling and Pollinating Wasps

While I'd love to be seeing more insect life in our yard, I have to admit that I AM seeing some interesting insects - including a few that are totally new to me.  So I thought it would be fun to share what I'm seeing as well as the blooms that are bringing them in.

I started out to make this post an overview of all the pollinators I've seen over the week, but it quickly became apparent that would be overwhelming, so I decided to focus this post just on wasps.

Wasps have been quite prominent recently, especially solitary wasps.  Last Friday, July 20th, was when I first noticed some unusual ones -3 in a row, in fact, over the course of about 10 minutes, on the clustered mountain mint (Pycnanthemum muticum). 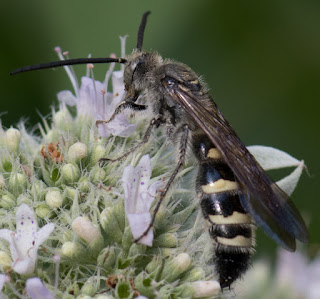 The first was a large scarab hunter wasp that has no common name so I've nicknamed it the fuzzy scarab hunter wasp (Campsomeris plumipes).  Like other scarab hunters, this wasp flies low above the ground, searching for (buried) scarab beetle larvae, a.k.a. beetle grubs.  When she finds one, she digs down to it, paralyzes it, lays an egg on it, and flies away.  The egg hatches out and the wasp larva consumes the beetle grub.  One wasp egg on one beetle grub, so every one of these you see means that a scarab beetle of some sort - say a June bug or green June beetle - didn't make it to adulthood.

As you can see, the adult wasp actually eats nectar to sustain itself, as is true for most of these solitary wasps.  Also as solitary wasps, they are not aggressive and they will not sting unless you actively try to handle them or they get caught in your clothing, stepped on in bare feet, etc.  You can assume this is true for all solitary wasps unless someone mentions otherwise.  It's a nice change from the more problematic social wasps.

As an aside, all the solitary wasps I'm familiar with have only one generation each year, so if you take them out (for example, by spraying insecticides), it may be several years before their population numbers can rebuild by migrating in from surrounding areas.  Given how well they function as both pollinators and, probably more importantly, as pest control, that would seem to be extremely short sighted to me. 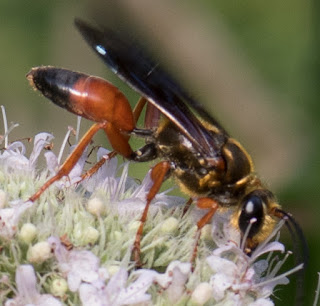 Back to my magic 10 minutes by the mountain mint, the next insect to fly in, while I was photographing the fuzzy scarab hunter wasp, was the great golden digger wasp (Sphex ichneumoneus).  This is a species I've seen before, both here and in Kansas, and I love its fiery color and large size.  You just can't mistake this distinctive wasp with its red legs and black-tipped red abdomen for any other species.  Look, too, at the golden glow created by the gold hair on its head and thorax.  That's something you almost have to take a picture of to appreciate, although I've seen it highlighted occasionally as one of these beauties nectars.

Another solitary wasp, great golden digger wasps hunt for and paralyze grasshoppers and crickets as food for their larvae.  The female digs a burrow in sandy soil, with a central, almost vertical, main burrow and individual cells radiating out from this primary burrow.  She places one paralyzed grasshopper or cricket in each cell, lays an egg on it, then seals up the cell.

As I was finishing up my "photo session" with the great golden digger wasp and taking a few last photos of the fuzzy scarab hunter wasp, I noticed more movement in the air space around the mountain mint - a thread waisted wasp had come in to feed, too. 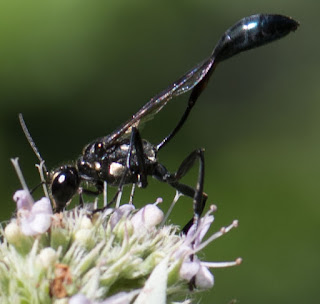 This rather bizarre looking wasp not only held its abdomen up at a strange angle as it flew, but the sun caught metallic glimmers of color on its otherwise black body and wings.  Researching on BugGuide.net, I identified this species as Eremnophila aureonotata.  Again there is no common name, so I've nicknamed it the gold-marked thread-waisted wasp, "aureonotata" meaning "gold-marked" in Latin.  This solitary wasp species feeds its larvae on a wide variety of (paralyzed) moth caterpillars, utilizing a burrow in the ground, as far as I can tell.

So, according to the time stamps on my photos, in just over 10 minutes my mountain mint had nurtured predators working to control beetle grubs, grasshoppers and mole crickets, and moth caterpillars in my gardens.  Not too shabby!!!  And it didn't cost me a dime beyond the initial cost of a very pretty perennial plant. 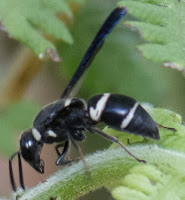 I've seen a couple other wasps this week, too.  One I've been seeing frequently for several weeks now is less than half the size of the big guys above.  It's a cute little black mason wasp with 2 white stripes on its abdomen (Euodynerus sp.).  When I grabbed its picture above, I think it was hunting for caterpillars among the ferns.  Again, there is no common name for this wasp, so my description above ("cute little black mason wasp") will have to suffice.  Mason and potter wasps feed their larvae primarily on moth caterpillars, although some species also use the larvae of leaf-eating beetles.  If you see smallish wasps using mud to fill up small holes (for example in brick, where your hurricane shutters have gone up in the past), it may well be one of these mason wasps.  They build cells out of mud in hollow tubes, provisioning each cell with a paralyzed caterpillar or beetle larvae on which they lay an egg before closing up the cell and moving on.

Do you sense a pattern among the solitary wasps here?! They've found a good gig in paralyzing prey to keep it fresh for their young to eat after hatching, then tweaked the process in a myriad of different ways so that each species has its own spin...and ecological niche.

I've seen these little black and white mason wasps nectaring on blossoms as well as hunting in my gardens.  I've found small holes filled with dried mud, which I presume are their nest cells.  These are enjoyable little creatures for me to notice as I go out and about weeding, planting, transplanting, watering, and photographing.  Just in the last week I have photographs of this species hunting in these ferns, shown above, as well as in camphorweed and in and out of leaves and mulch at the base of phlox and lyreleaf sage.  Front yard, back yard.  Sun, shade.  This little wasp is a "busy bee" in its work habits. 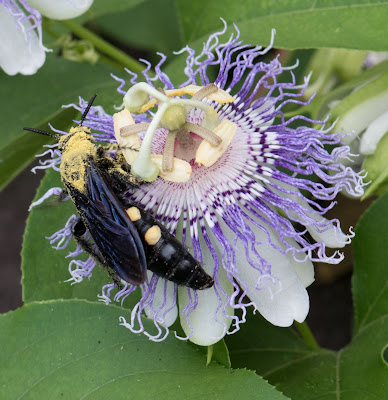 At the other end of the size spectrum from the cute little mason wasp is the gigantic 4-spotted scarab hunter wasp (Campsomeris quadrimaculata) that I've seen a couple times now.  Boy, am I ever glad that these guys aren't at all aggressive, because they are HUGE and they give me pause even though I know they won't bother me.  The photo above shows this big black beauty all coated with pollen from nectaring at maypop flowers (Passiflora incarnata). 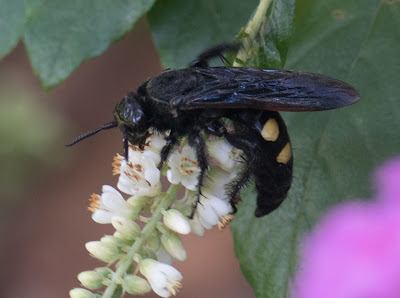 Here is a photo I took about 2 weeks ago of a "clean" 4 spotted scarab hunter wasp, nectaring on sweet pepperbush blooms (Clethra alnifolia).   See how much pollen the individual nectaring at the passion vine is wearing in comparison?!  That's what I call a pollinator!

For the sake of clarity, again I've made up a nickname for this wasp as, again, it has not been given an official common name.  Its specific Latin name, "quadrimaculata", means "4-spotted", while the entire genus is known as scarab hunter wasps, hence the "4-spotted scarab hunter wasp".   This is another great predator in the garden, paralyzing and laying eggs in scarab beetle grubs.

Big and little, I've got wasps sharing my gardens that are making life easier - and much more interesting - for me.  I used to hate wasps, but now I smile whenever I see one.  I hope you're seeing some great solitary wasps in your gardens, too.

What a fun post! I wish I could remember the names of the different wasps and other insects I see in our yard. I am remembering the great golden digger this season, so hopefully, I will again next year, even though I did post some photos of some last season.

We had potter wasps in our previous garden. Fascinating to watch them working so hard. First to source the (water and) mud, then to fly it in, and build, build, build.