When you see something like this small mound of sand, with a single, perfectly round hole in the middle of it, in the center of your lawn, what do you think? 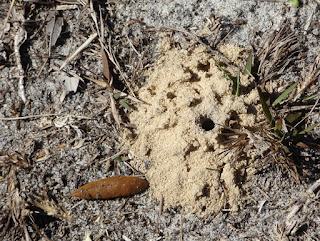 How about if you see a group of such structures, scattered throughout your lawn, as in this public area near our house? 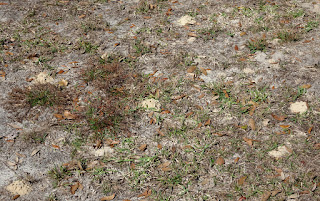 I used to puzzle over this type of hole, wondering what made it and what lived in it.  Big ants?  Spiders?  Tiny snakes?  Mole crickets?

Nope.  Not even close.  It was many years before I realized what I was actually seeing.  Mounds like this are the work of solitary bees, those wonderful little pollinators that most of us barely even know about.  As I walk around my neighborhood, I see quite a few of these tiny sand piles right now - but only in the yards where the grass is just so-so.  Thick, lush lawns - which can only be maintained through chemicals down here - have absolutely no little bee mounds.

So, wouldn't ground-nesting bees be a bad thing?  What about the possibility of bee stings?

You don't have to worry at all.  There's really no problem.  The key word is SOLITARY.  Each hole is the work of one little female bee, who visits hundreds of flowers to collect pollen with which she makes little balls of food, one ball per egg.  She will only produce a couple dozen eggs in her lifetime - and she'll work VERY hard to do that and to provision each one with enough food to ensure survival.  This little bee doesn't have time to worry about keeping anything away from her nest.  In fact, you'll rarely catch her there.  If she were to sting you, she'd die - and then there would be no more eggs laid.  She's not going to waste her life that way. 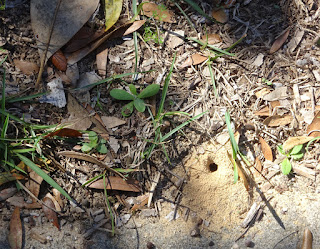 So why do people like these little solitary bees so much?  What makes them special?

Native solitary bees are the pollinator workhorses of this continent.  They evolved with the plants on North America to efficiently pollinate their flowers, producing fruit, nuts, and seeds.  (Honeybees were brought over by European settlers.  The native plants here would survive just fine without honeybees.)

Right now, in very early March, I'm only seeing one species of solitary bee at flowers.  As I look around, I'm also only seeing one type of solitary bee nest, consisting of this dainty mound of fresh sand with a perfectly round hole, about 1/4" in diameter, in the approximate center of it.  I have not yet seen a bee come out of one of these holes, but I am guessing that the two belong together, that these are the nests of the bees that I'm seeing. 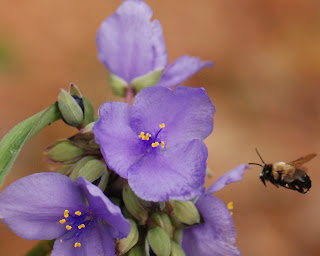 It's been a little tough to photograph and identify these small, solitary bees as they zip from flower to flower, though.  They don't stay in one place for very long.  To my "naked" eye, they look like little bumble bees, but they are much faster and warier than bumble bees.  Most of these solitary bees seem to be a bit less than half the size of a typical bumblebee - or carpenter bee. 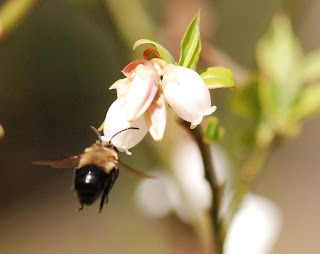 After several days of stalking these little guys, though, I've been able to come up with enough photographic evidence to identify them, at least to my satisfaction.  I believe they are southeastern blueberry bees, Habropoda laboriosa. 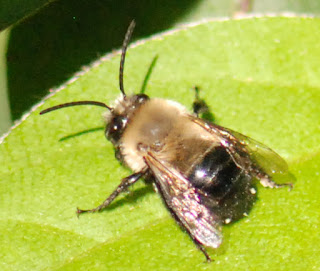 If you raise blueberries, these guys are superheroes.  They buzz pollinate, which involves buzzing in a special way and at a particular frequency to get the pollen to drop.  Blueberry flowers are rather hard to pollinate, actually, and these guys are specialists at it. 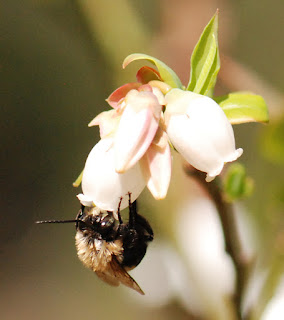 Apparently a single female southeastern blueberry bee will visit up to 600 blueberry flowers to collect the pollen to make a single ball of food for one of her eggs.  Through her pollination activity, over the course of her lifetime, she is estimated to be responsible for producing an average of 6000 blueberries. That's a lot of blueberries for a little bee like this!

Although these bees are primarily known for "working" blueberry flowers, I am also seeing them at both azalea blooms and at spiderwort blossoms.  Here's a female with legs full of (white) pollen at a spiderwort bloom. 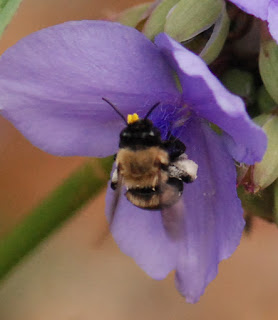 Of course, only the females carry pollen, so if you see a little bee laden with full pollen baskets, it's definitely female.  The males of this species have a large white patch on their face, like the individual in the (blurry) picture below, so it's actually easy to tell the sexes apart, even if there's no pollen to see. 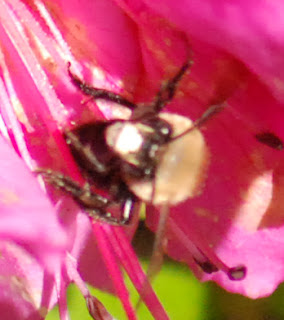 So if you have blueberry bushes in your yard, keep your eyes open for small "bumble bees" working your blueberry flowers.  They are about the best insurance you can have for getting a good crop of berries later in the year.  Best of all, they're free!  Be sure to leave some areas of open soil or scraggly lawn for them to nest in, though, because you can't have southeastern blueberry bees without places for female southeastern blueberry bees to provision and raise their young.
Posted by Gaia Gardener: at 11:52 AM

Your pollinator posts are so good. I always learn something. I've become a bee campaigner to my family and friends because I know more about them. Mostly, my comments are, "just leave them alone. They're busy and won't hurt you." :-)

Thank you! And it does my heart good to know that you campaign for the bees with your friends and family!

I have so much fun learning about lesser known pollinators; knowing others are interested really is icing on the cake.

How cool to have found these homes in the ground, and be able to identify which kind of bee made them! I am looking forward to spring. It is so close now!

Well, I'm not 100% sure that these holes belong to the blueberry bees, but they are the only holes I'm seeing, there are a lot of them, the blueberry bees are the only little native bees I'm seeing, and there are a lot of them, too. I'm looking for confirmation from other, more authoritative sites that might have photos of the nests of Habropoda laboriosa, but so far I haven't found any. I do know that they nest in the ground, though, so that's a good start.

Enjoy spring as it emerges up your way!