We made an unpleasant discovery a couple days ago:  our lower terraces, next to the water, are infested with a particularly nasty invasive grass called torpedo grass, Panicum repens.  This stuff is like huge Bermuda grass, on steroids. 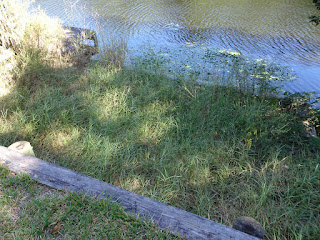 From 10 feet above the surface, that doesn't look all that bad, I guess.  But, up close and personal, this stuff is wiry, open, 2+ feet tall...and ugly.  You can see that it's almost completely covered the east terrace in the above photo, taken on October 4th last year.  Frighteningly, when I looked a bit further back, here is a photo I took from the deck stairs only 3 1/2 months before the photo above. 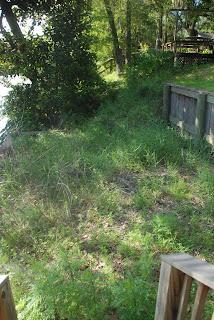 In late June, the torpedo grass was only claiming about half of the eastern lower terrace.  Where DID this horrible weed come from?

It's not that I didn't know the terraces were full of "weeds", it's just that I didn't realize how invasive one of those weedy plants actually was.  I am particularly in debt to National Invasive Species Week this week, because it was a post made about torpedo grass by our local Extension Office during this educational event that made me look a little more closely.

Believe it or not, I believe this was one of those serendipitous events in life.  I've been working down on the western terrace, weeding out the dewberry, Vasey grass, countless oak and hickory seedlings, a popcorn tree sapling, and remnants of ragweed and Bidens alba so that I can actually start making some garden beds in the area.  Here's the area I've been working in, taken last June.... 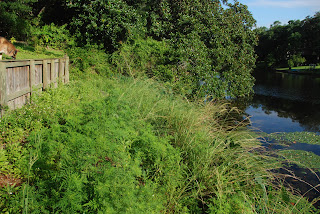 ...and here it is 5 days ago, after I put down my garden gloves for the day. 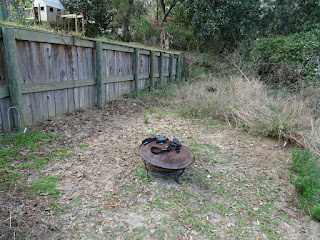 I had just found a rhizome of what I now know is torpedo grass, growing under a big clump of Vasey grass near the water's edge, and I was too tired to tackle the big clump without a break.  So there is some torpedo grass on the west side terrace, too.  I won't know how much until I get back in there, tackling the rest of the early successional vegetation that has established, but at least it's not a pure stand, like it is in the east side.

I am so glad that the article on torpedo grass came when my awareness of what was growing on the lower terraces was fresh!

Now I want to echo David Farragut's famous cry, "Damn the torpedoes!  Full speed ahead!" and start planting in this area!  Common sense, however, tells me that then I'd have nice plantings that would still be infested with torpedo grass.  Soon they would look like very nasty plantings, indeed.  The first line of business is now to get rid of this invader as soon as possible.

Research on this unprepossessing plant is not reassuring.

Like so many other really unpleasant invasives, this one was purposefully brought to our country by the agricultural community to provide "better forage" for livestock, probably in the late 1800's.  It certainly grows without pause.  Unfortunately, however, it turns out that grazing animals don't actually like it much, unless it's really young and tender.  Meanwhile it, apparently, really likes life here in the Gulf Coast region, where it has no known enemies or constraints on its growth habits.

One suggested common name for this grass is "creeping panic".  The Loyola Center for Environmental Communication says that it's "akin to Attila the Hun" once it's established.  Dan Gill, a gardening columnist for the New Orleans Times-Picayune put it this way, "Torpedograss is not difficult to eradicate: It is nearly impossible to eradicate."

Have I mentioned how unhappy I am to have found this plant on our property?

There are photos of this monster growing in deep water on the web - up to 6' deep, according to the sources.  So far I haven't seen signs that it's in the lake behind us...yet, but it's right next to the sea wall.   If we don't get it stopped now, it will be in the lake in the very near future.

According to various experts, manual removal is almost impossible because it (like so many others) will resprout from any tiny bit of rhizome left behind.  The rhizomes can grow as much as 2' below the soil surface.

Chemical treatment is therefore suggested, with the standard array of herbicides listed, but multiple treatments are apparently almost guaranteed to be needed.  I hate using chemicals, but we're breaking down and trying them, in a very targeted way.  Greg mowed a few days ago (before we realized what was there, actually), then burned the center.  This afternoon, he treated the edges that hadn't been burned with concentrated Roundup.  We'll watch for green-up in the burned area and/or in the edges and then we'll re-treat, probably in about 3 weeks.

One idea I'd love to be able to try, if this didn't feel like such a dire emergency already, would be controlling the torpedo grass with a different plant, an aggressive native that might be able to outcompete it.   I was reminded of that option when I saw this post, by Nancy Lawson, The Humane Gardener:  "How to Fight Plants with Plants".  Her experiences made me remember that Greg and I noticed ragweed outcompeting field bindweed, many years ago, in an abandoned soybean field after we seeded it to native grasses and forbs.  Right now, the biggest problem with using plants to fight plants for handling our torpedo grass problem is that I have NO idea what might outcompete it.  Unfortunately, I just don't have time to experiment, either, if I'm going to keep the torpedo grass out of the lake.
Posted by Gaia Gardener: at 2:50 PM