A Buzz in the Meadow


I just finished reading A Buzz in the Meadow, Dave Goulson's latest book.  (He wrote A Sting in the Tale several years ago, which I thoroughly enjoyed reading last December.)  Goulson is a biology professor in England who has done some excellent research on bumblebees;  he is the founder of the Bumble Conservation Trust.  I was really looking forward to reading this book, especially as it was about the run down French farm Goulson purchased about a dozen years ago and his efforts to restore it to decent biological/ecological health. That resonated with my efforts to restore decent biodiversity on our 10 acres in Kansas, so I was curious to see what sorts of results a "professional" had had with the process.

At first I was a little disappointed.  His descriptions of the early years at the farm were fine, but they didn't spark me. In his introduction, he'd described how he'd organized the book into 3 sections, though, so I kept reading.

Things picked up as I read a bit further - some of the natural history relationships that he describes almost seem like the stuff of science fiction or legend, but they are processes that occur every day in the normal course of events.  Do hairstreak butterflies in Kansas have the same weird move, just prior to landing, that hairstreaks in Europe do? 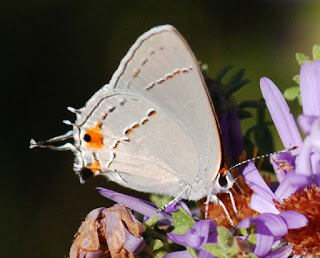 This is the gray hairstreak, feeding on aromatic aster, in my fall garden a couple years ago.  I'll be watching hairstreaks as they land to feed now.

How long do OUR dragonflies stay coupled during the summertime - as long as European dragonflies do?  If so, why have I never noticed that before?

WHY would some flowers evolve to be warmer than their surroundings?  (Remind me to check magnolia blooms in early spring, would you?!)

Apparently in Europe, treating a flower filled grassland with chemical fertilizer (even just for a year or two) will cause the flowers to disappear as the grasses go absolutely berserk and choke the forbs out.  Does the same thing happen in the American prairie???

There are also a few species of wildflowers in Europe that act as partial parasites on nearby grasses, so meadows with those flowers in them tend to have more species diversity as the grasses get kept "in their place" more effectively.  Does that happen in the prairie???

As you can tell, there were many things to think about as I read further into this book.

Then I got to the 3rd section.

If I'd had one disappointment in A Sting in the Tale, Goulson's earlier book, it was that Goulson didn't seem too hot and bothered about neonicotinoid pesticides and their effect on bees.  I don't remember him saying much at all about colony collapse disorder.  Since he was a bumblebee researcher, this seemed like a huge omission.

Apparently a lot of other people were wanting him to weigh in on the subject, too, so he did what any REAL scientist would do: he decided to study the issue himself.   Then he wrote about what he learned in Chapter 13:  "The Disappearing Bees". This chapter gives a brief history of the issues, then goes into the research that he did on the topic of neonicotinoids' effects on bumblebees, what it revealed, and what happened after that research was published.

It's eye-opening.  If you use pesticides in your yard or garden, if you counsel people about whether they should use pesticides - I highly recommend that you read this chapter, even if you read nothing else in this book. I found my jaw dropping at times.

(Obviously I must be developing facial tics, after re-reading that last paragraph!)

Finishing up the book, the final chapter was so interesting that I read it out loud to my husband.   Talk about historical perspective! Goulson even worked the "hobbit people" in there!

Hobbit people or not, the book had important and interesting things to share.  Reading it left me feeling that I could make a real difference anywhere I lived by creating a small refuge of biodiversity in my yard and garden.  Each of us will change the world, at least a little bit.  I like to think I'll leave the world a little bit richer for my having passed through it.....