A New Beginning and the Start of a Bittersweet Ending

Greg and I spent the month of June in Ft. Walton Beach, Florida, on "Baby Watch."  Connor finally decided to join us about 10 days ago, arriving safely but with a whole lot of uproar.  Greg and I stuck around Florida for a week or so, getting him and his parents snuggled in a bit, then we hightailed it back here to Clearwater for a bittersweet fortnight to be spent doing a final cleanup and clearout here, culminating in a total packup and moveout.
Because of Baby Watch, we've literally been gone for over a month.  We've had a great couple mowing our lawn for us, once a week, but otherwise the yard has been on its own during that time.  No weeding (during all of April and May, too, to be honest), no watering, no transplanting, no nothing.  So I had no idea what I was going to find when we got back, especially as wet as the weather was for much of May. 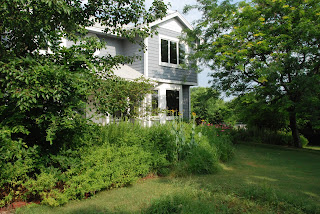 Doing a walkabout yesterday morning, I found some good things and some disappointing things, some expected changes and some unexpected changes. To get the disappointment out of the way without further ado, I was very unhappy to see how weedy the buffalo grass was.  After 3 years of relatively careful weeding, I was hoping that there wouldn't be much crabgrass...but I was sadly mistaken. I'm hoping to find time to weed it out one last time before we leave...but I'm not counting on it.  Weeding the lawn is a pretty low priority right now.

The front flower garden is full, but not very floriferous, a common problem for this bed at this time of year.  The rain has made everything very tall this summer, which is a little overwhelming.  The daylilies bloomed while we were gone, as did the butterfly milkweed. The lanceleaf coreopsis and the pink evening primrose were just beginning when we left;  they are completely done now, but the Echinacea is still blooming nicely. 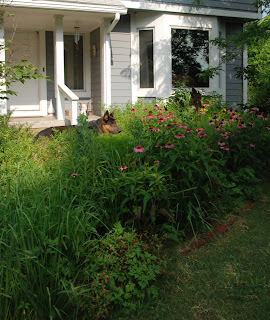 Looking down the front walk, there is a single tall wild lettuce dominating the center stage, but at least that will be quick and easy to pull out.  The eastern gama grass (Tripsacum dactyloides) that didn't get relocated this spring is liking its spot next to the walk entirely TOO well.  If no one wants it, it will get moved to the compost pile.  Five or six foot tall grasses right next to a front walkway are just not welcome, even if they are native. 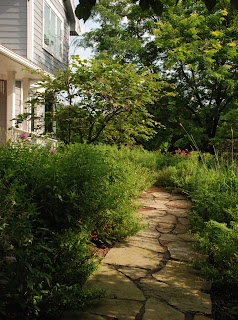 The wild bergamot (Monarda fistulosa) bloomed while we were gone and it is just about finished.  I'm going to cut most of it way, way back and see what happens.  Or, actually, I guess I won't see, but at least it won't be quite so front-and-center with its drying seed heads.  If anyone wants some, I have several nice, healthy clumps that could use a new home..... 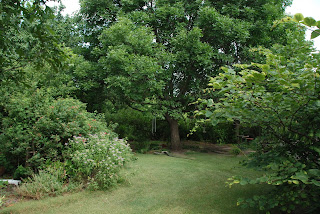 The back courtyard is rather wild & woolly and no flowers are currently blooming, but at least there is some open space left.  Looking out my back kitchen door, I just saw some fireflies beginning their nightly display.  Somebody's enjoying the beds in their rather overgrown condition!

The back courtyard was where I started a bit of work this morning, weeding away with a will until I accidentally backed into a healthy poison ivy plant I hadn't noticed.  I tried to go on, but it was hard to concentrate while worrying about how much oil I had on my bare legs, so I gave up and went in to take a shower.  Nine hours later, I can report that the shower, with large amounts of soap vigorously applied, did the trick - no itchy rashes anywhere, at least not yet. 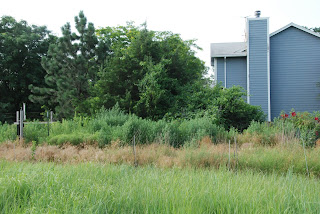 The vegetable garden is the real problem child right now.  We have done absolutely nothing in it all spring, and it is an overgrown disaster.  Sigh.  So much potential and it's just totally buried from sight right now.

So there's lots of work to do this week.  On the plus side, the weather is supposed to be reasonable, with one or two days in the 70s.  On the negative side, I managed to put out my back very thoroughly yesterday afternoon.  On the plus side, as long as I sit in straight chairs or directly on the ground and move slowly and carefully, I can get some work done.  On the negative side, our air conditioner wasn't working correctly when we got home.  On the positive side, we broke down and called Bob Stith Heating and Plumbing and they came to fix it today, despite the holiday.  Cool temperatures in the house is a BIG positive!

I'll leave you with several more positives from our walkabout yesterday....

First, a tiger swallowtail nectaring at the wavy-leaf thistle (Cirsium undulatum) in the lagoon.  (Yes, the lagoon needs to be mowed, but we won't think about that right now.) 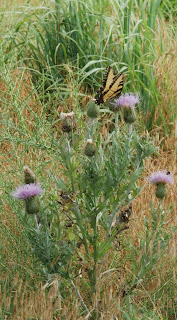 Second, our beautiful patch of smooth milkweed (Asclepias sullivantii) in the Cedar Grove beyond the Draw.  (No, I did not see any monarch caterpillars, unfortunately.) 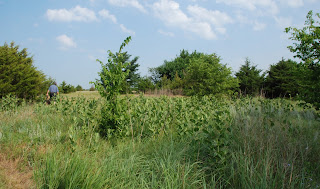 Third, my Pitcher's clematis (Clematis pitcheri) is looking better than I've seen it look in several years!  Here are a couple of the blooms, on a stem weaving through one of the rose bushes.  They're not colored as deeply blue-purple as usual, but they are still quite attractive in my opinion. 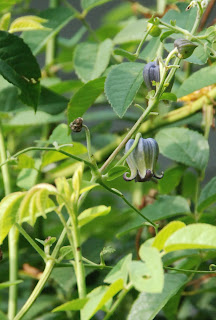 And, finally, a gorgeous patch of whorled milkweed (Asclepias verticillata) next to the path in the Front Tallgrass.  The pollinators were literally dizzy with delight as they fed on the blooms! 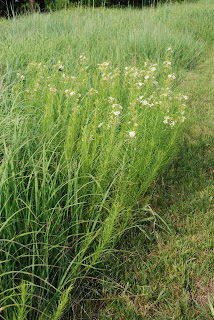 Wish us luck!  I'll try to share our progress over the upcoming several weeks.....

I was thinking you had already moved. Is your house sold yet? You do have one picked out in Florida, don't you? I hope you stay healthy and are able to leave your garden in pretty good shape.

Unattended gardens can teach us a lot. Sorry your back is giving you issues. Glad you didn't have any ill effects from the poison ivy. Yikes. I will miss your prairie plant and critter reports, but look forward to seeing how your new place progresses. I'm guessing you got a lot of rain today. That should make weeding easier. Take care and enjoy the treasures hiding in the garden and you set it for the next owner.
P.S.--The fireflies are loving the taller plants here too!

Its the first i heard of you leaving. Florida huh? Wow a new adventure. Best of luck Cindy and Greg. Happy trails. Will continue to read your blog.

Your kids are lucky to have parents who are willing to give up their place, and help out in another which is so different. I would do the same if I had a grandchild that needed care! Hope you enjoy the weather in Florida. No more Winter!

Jayne, I feel lucky to be having this opportunity to (hopefully) become an important part of our grandson's life. Too often, these days, we're separated by time and distance and jobs. The older I get, the more important I realize that family and friends are.

Sue, I don't know when you left your comment, but I think it was several months ago - and I just got so busy that I never took the time to respond. I'm so sorry!

Yes, we have another home in Florida now and, no, we haven't sold our home in Kansas yet. My heart aches as I worry about who will buy it and take over managing the land. However, this is where we need to be right now.

GonSS, As with Sue, I missed answering your comment in a timely fashion and I apologize for that.

We are fairly well settled in Florida now and doing day care (and some night care) daily. Unpacking has slowed to a crawl, but sooner or later it will get done.

I have not started working on the yard at all - although I do have a few plants in pots that have become a de facto container garden until I can find the time to get them in the ground!

Hope all is well with you and your husband (and your gardens)! Did you get to the Wildflower Weekend this year?! I do, indeed, wish I could have come back to Kansas to join in on that. We had a lot of fun last year.

Oh. .Just peeked in on your blog. .to find you have packed up and moved. .Not sure how long it will be till you see my comment. .and if my computer hadn't crashed and lost all my contacts. .I would email you to say hey!! Hope all is well. .and that you are feeling at home now. I hope you don't miss those cold Kansas winters too much :-)Best wishes to you and yours!!

Greg, I don't know how I missed your comment earlier this year, but I am just now finding it. Thanks so much for the good wishes! We're doing well...and I'll do my best to post again soon. Lots and lots of changes.

Thanks for stopping by and leaving a comment! I haven't actually fallen off the face of the Earth...although we are officially now Florida residents instead of Kansas residents. The house sold in November...and I am keeping my fingers crossed that the new owner maintains at least part of what we'd accomplished over the years we were there. We're doing well and loving being grandparents! Hope you and your family are doing well, too. Merry Christmas!