Have you ever run across a little mud pot, perfectly formed, about the size of a small marble, stuck to a twig or a rock or something else rather stationary? 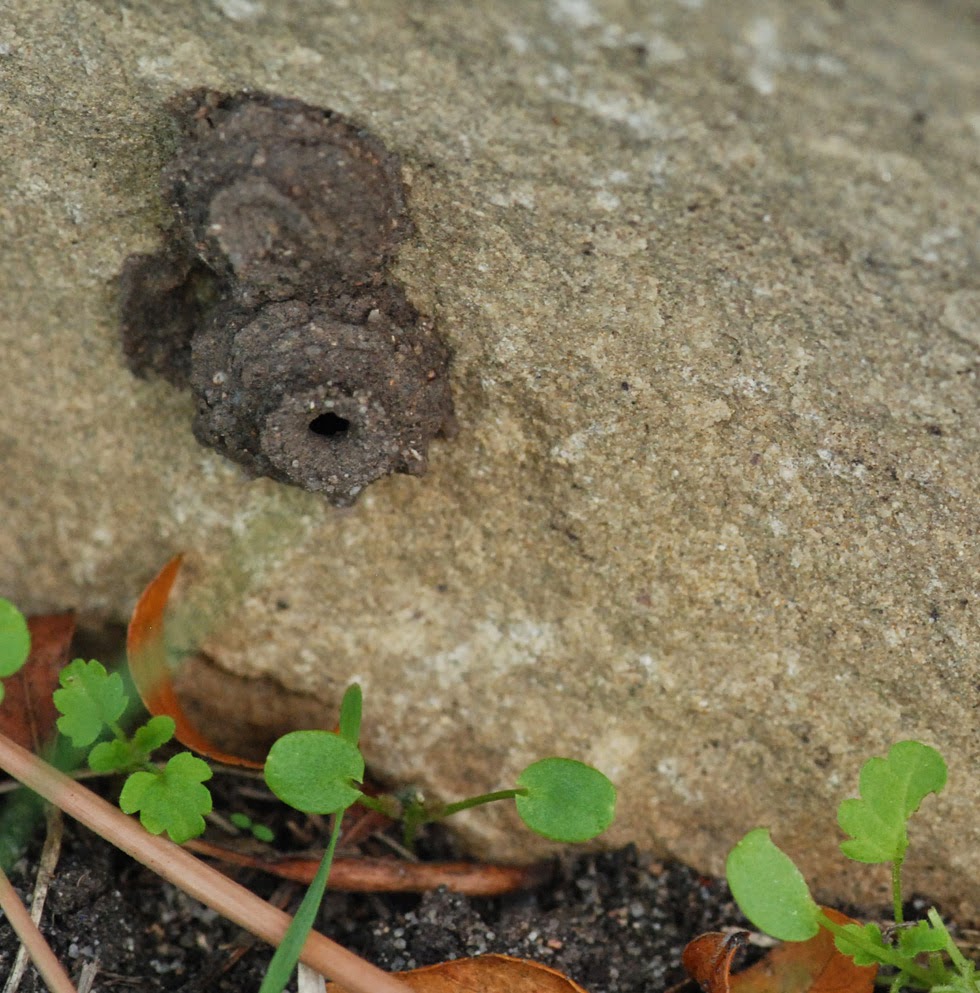 If so, you've come across the nursery for a type of solitary wasp known as a potter wasp.  (A very appropriate name, if you ask me!)

These are great little insects to have living in your garden.  They are gentle wasps and will not sting unless you actually pick one up.  That pot?  Well, let me tell you about the life cycle of the potter wasp....

Adult potter wasps feed on flower nectar to provide themselves with the energy they need to perform their adult tasks. For a male potter wasp, this is pretty simple.  He needs to find female potters wasps and mate with them. 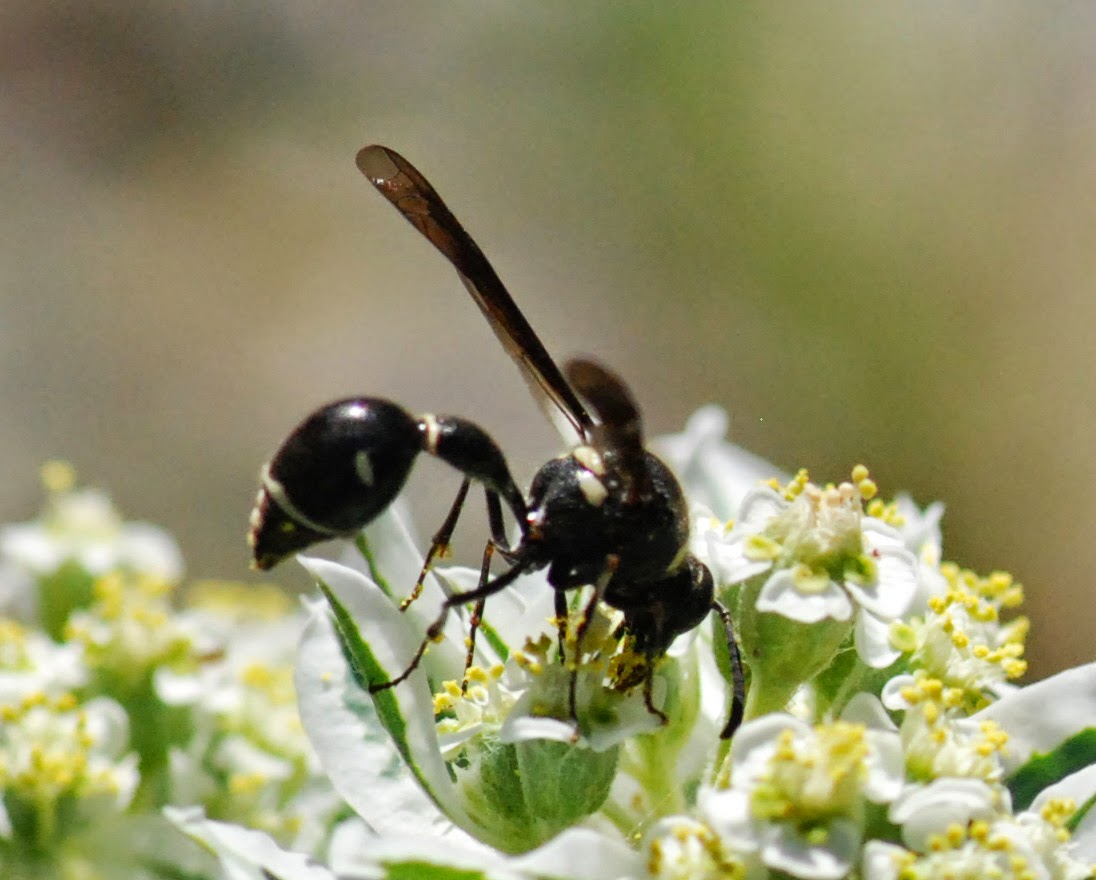 As a side note, in these photos the potter wasp (Eumenes fraternus) is nectaring at Snow-on-the-Mountain (Euphorbia marginata), an annual wildflower that can be surprisingly attractive, although it tends to get a little leggy. 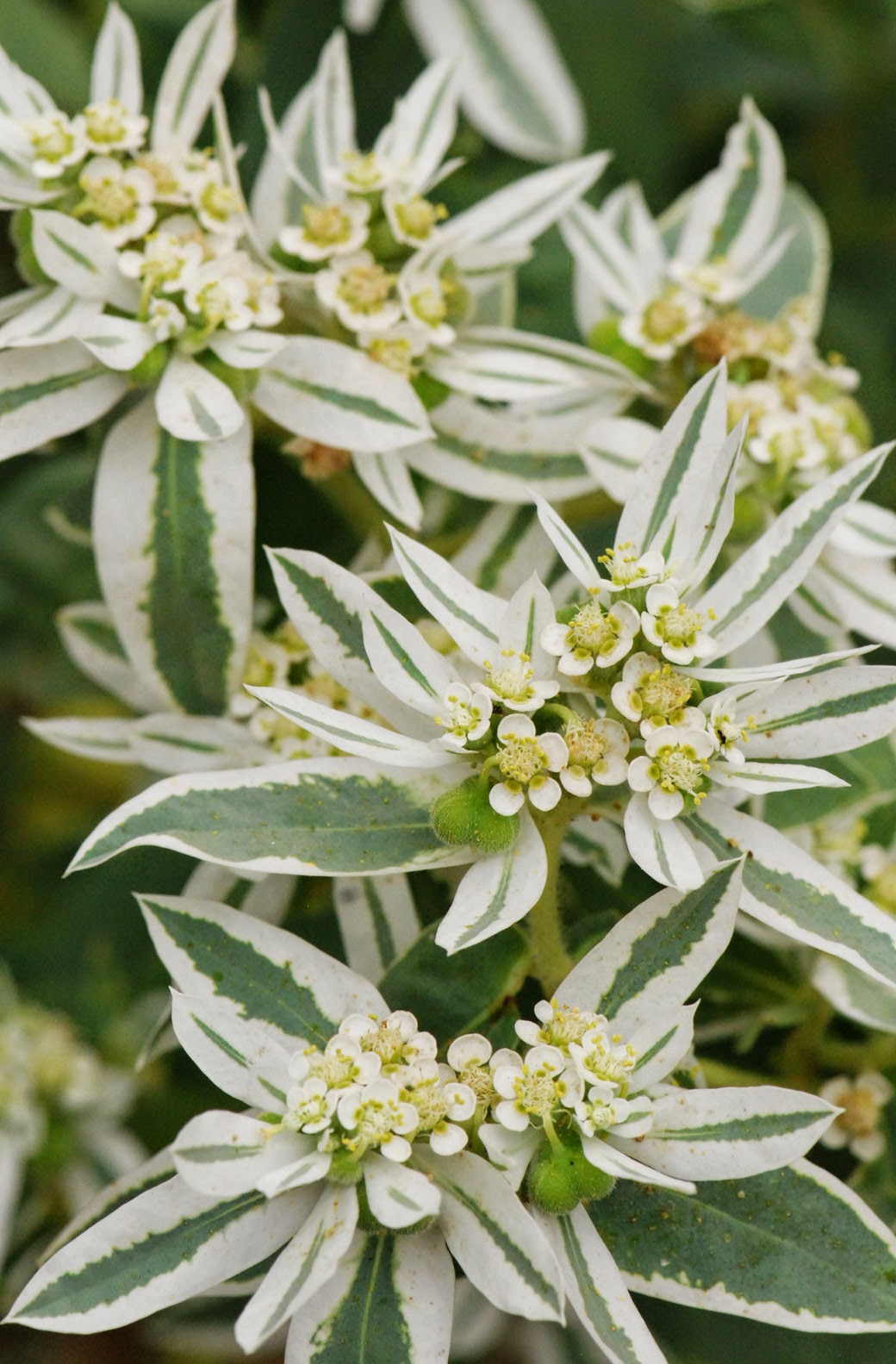 Life is a bit more complicated and definitely harder for female potter wasps, which are usually larger than the males.  A female not only has to find a male and mate, then she has to locate a suitable site to build her pots and ensure that the next generation has enough food and is safely protected enough to make it to adulthood. 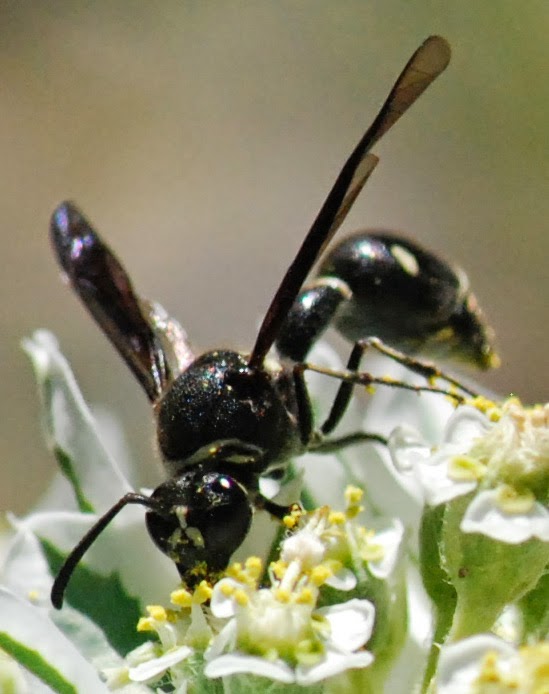 To do this, the female potter wasp gathers mud in her mouth (some sources say she actually carries water to dry soil and mixes up the mud herself, mouthful by mouthful!) then flies to her selected site to put the mud in place.  It can take hundreds of flights to build each pot, so the pots are usually located fairly close to a source of appropriate building material.

Once the pot is built, the female begins looking for small caterpillars.  When she locates an appropriate caterpillar, she stings it with just enough venom to paralyze the caterpillar but not kill it, then drags it to the waiting pot, where she deposits it through the open mouth of the pot.  Depending on the size of the caterpillar(s), the female potter wasp may provision each pot with from one to 12 caterpillars!  Then the mother potter wasp lays a single egg and closes up the pot with more mud.

When the egg hatches, the larval wasp eats its way through all the nutritious food (a.k.a. paralyzed caterpillars) that Mom packed in.  When the larva is finished eating and growing, it changes into a pupa and undergoes more changes, finally emerging as an adult potter wasp.  The new adult potter wasp chews its way through the side wall of the pot, which is thinner than the neck, and flies away.

You can tell, then, whether the pot is being worked on (the neck of the pot will still be open), has a baby wasp inside it in either the egg, larval or pupal form (the pot will be sealed up tightly), or has successfully hatched out an adult wasp (there will be a hole chewed through the side of the pot.  One of the pots above, then, is fully provisioned and has an egg and paralyzed caterpillars in it, while the other pot has been constructed and the female has begun hunting for caterpillars with which to fill it.

Not surprisingly, the female will not start constructing a new pot until the one she's working on has been fully provisioned, the egg laid in it, and the neck opening has been sealed.

While wasps can strike fear in human hearts, the solitary wasps such as potter wasps and mud daubers are almost never aggressive.  After all, if a female solitary wasp gets killed, she has lost all ability to procreate.  Since a stinger is a modified egg-layer, a male wasp can never sting, no matter how scared or angry he gets.  It is only the social wasps, like paper wasps and yellow jackets and hornets, that have enough "extra" individuals that they can afford to aggressively defend their nests and risk losing their lives.

Since the baby potter wasps are completely "created" by eating paralyzed caterpillars, potter wasps are an important biological control of caterpillars in any natural community...and in your garden.  So next time you find a little round clay or mud pot or two or three, pause a minute to say thank you to the female potter wasp that built it and that helped make your garden healthier as she stocked the larder for her developing offspring.

I've seen both those nests and those wasps before! Usually I see the wasps on the sweet pepperbush and mint.

Woohoo! A great "bug" to sight in your gardens!

I love these wasps. I have one nest in my car port. Hope they will get enough clay when it warms up. I may have gone overboard with mulch ...

I have never seen this one. A fascinating critter, I'll keep an eye out for it.

I enjoyed learning about these wasps. I have a number of wasps each season, but am not sure if I've figured out what kind they are. I know I have had some of those big ones that some are afraid of. They put their nests in the ground. They all seem to like the white blooms the best.

Debra, It's interesting, but I'm learning that mulch isn't necessarily a good thing in a prairie planting, once it's established. Glad you've got an established population though. Maybe you could pull back the mulch in one area right by the carport for them!

Jason, I've come to realize that wasps, in general, are really good in the garden - which is a huge admission for me, since I'm paranoid about anything that flies and buzzes. I'm finally learning, too, that solitary wasps are very peaceful creatures, so I'm much more relaxed around them now. I don't know why, but the little pots these guys make bring a big smile to my face!

Sue, with the exception of yellow jackets, which are a hornet, the wasps that nest in the ground are all solitary and peaceful, as far as I know. There are cicada killers, grasshopper hawks, spider hawks, and different types of caterpillar hunters. ALL good guys!

Interesting to note your comment about white flowers. I'm going to have to watch out for that.

I think it was cicada killers we had. They were around, but not a problem.

They're the biggest of the wasps in the area - and they aren't a problem at all...as long as you don't try to catch a female and hold her!