Another Wasp Player in the Garden

I'm starting the process of going through the photos from 2014, the ones that I didn't have time to edit or identify during gardening season.  There are SOOO many to go through!  And most of them are of insects.

Anyway, luckily I don't have many insect photos from January, February, or March. So I'm already on April.

I have to laugh.  You'll probably recognize the first insect I needed to identify, since it commonly comes to porch lights in spring time.  I took this photo on April 21st.  The greenery is Eastern Redcedar (Juniperus virginiana). 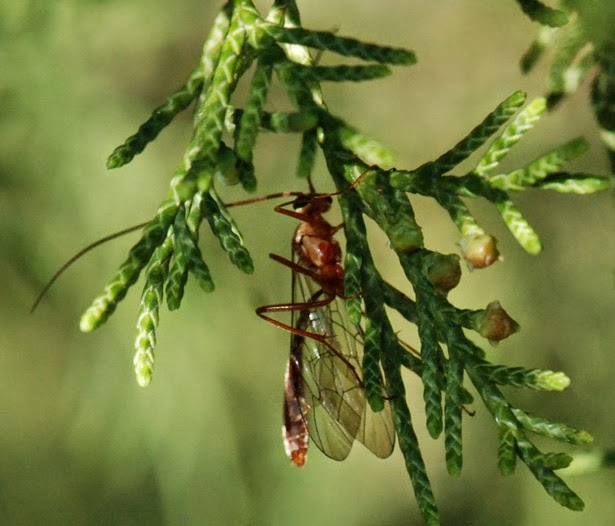 I recognized it as an ichneumon wasp, but I didn't know much more than that.  I've seen many, many of these over the years.  None have ever acted aggressively; I don't know if they are capable of stinging or not, but since they are wasps, I don't push the matter.  Anyway, I still don't know a lot more about them, but the little I learned tonight made me laugh - is EVERY insect I learn about a predator?!

Anyway, this beastie is a short-tailed ichneumon wasp, Ophion sp.  Their larvae are caterpillar parasites - one larva per caterpillar.  The caterpillar does not survive the encounter.

So, in the future, if you see one or more at your porch lights, you should rejoice.  This is natural pest control at its finest!
Posted by Gaia Gardener: at 9:21 PM

How interesting! Isn't the world of insects a strange one? They all have their own little place and their own reason for being.

I love wasps and I am not familiar with this one - even around porch lights. I will have to look up and see if they live in our region. My encounter with wasps in predation this year was among my dogwood shrub which was visited by the dogwood saw fly. It was nearly picked clean before the wasps appeared and began eating the larvae. It is so fun to learn about insects in the garden! I'm glad I don't use pesticides. Nature is so much more efficient and interesting. The shrub made a complete comeback and then some by the way.

Anna, thank you for stopping by! Yes, the world of insects is strange...and yet so important!

Kathy, that is really interesting about your experience with the dogwood sawfly. (Sawflies are, themselves, in the wasp family, by the way!) I've not seen the dogwood saw fly, so we are even, I guess.

I wonder if a lot of these ichneumon wasps don't get killed in bug zappers, since they come to lights so readily.....