Last weekend at this time (2 p.m., Sunday afternoon), I was just arriving home after a great weekend getaway.

"Where did you go last weekend?  Why did it take you so long to make it?" you ask.  "It sounds like you were doing LOTS of traveling already, so that can't have been the problem."

"To the Annual Wildflower Weekend of the Kansas Native Plant Society," I answer.  The AWW, as many people seem to call it.  As to why it took me so long to make it a priority to attend, I can't give you a rational answer.  All I can say is that I'm glad I went this year. 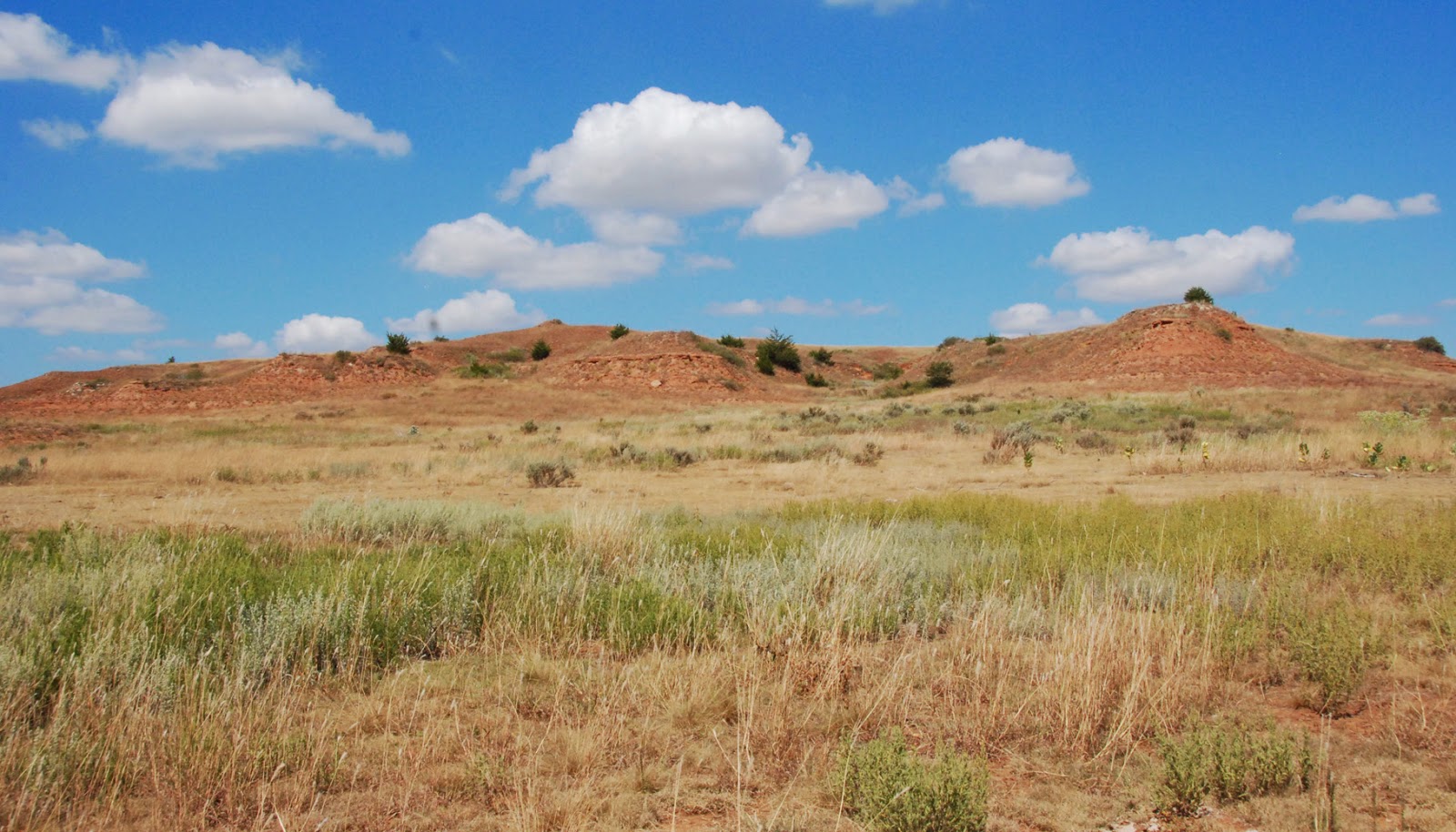 Each year KNPS's Annual Wildflower Weekend is held in a different location within Kansas, but it's always on the same weekend, the 3rd weekend in September.  No matter where the AWW is held, the weekend seems to hold lots of tromping around through impressive prairie sites full of not-so-common native wildflowers and grasses, as well as a lot of camaraderie with other souls who value the chance to spend time out tromping around and looking at plants too.

This year Greg told me to go.  I politely scuffled my feet a little, feeling quite guilty at leaving him home alone to take care of the homestead for 2 days while I went out to "play"...then I shoved the guilt down, made my reservations, and skedaddled.

I'm so glad I did.  I had a great time and I had a chance to see some beautiful sights and sites.  Most exciting of all, I reconnected with a couple friends from many years ago, had a chance to meet two friends I've previously known only through blogging, and became acquainted with several other folks who are new friends in the making.  The most hopeful part is that all of us share a passion for plants and animals and wild spaces...and learning about the web of which they are all a part. 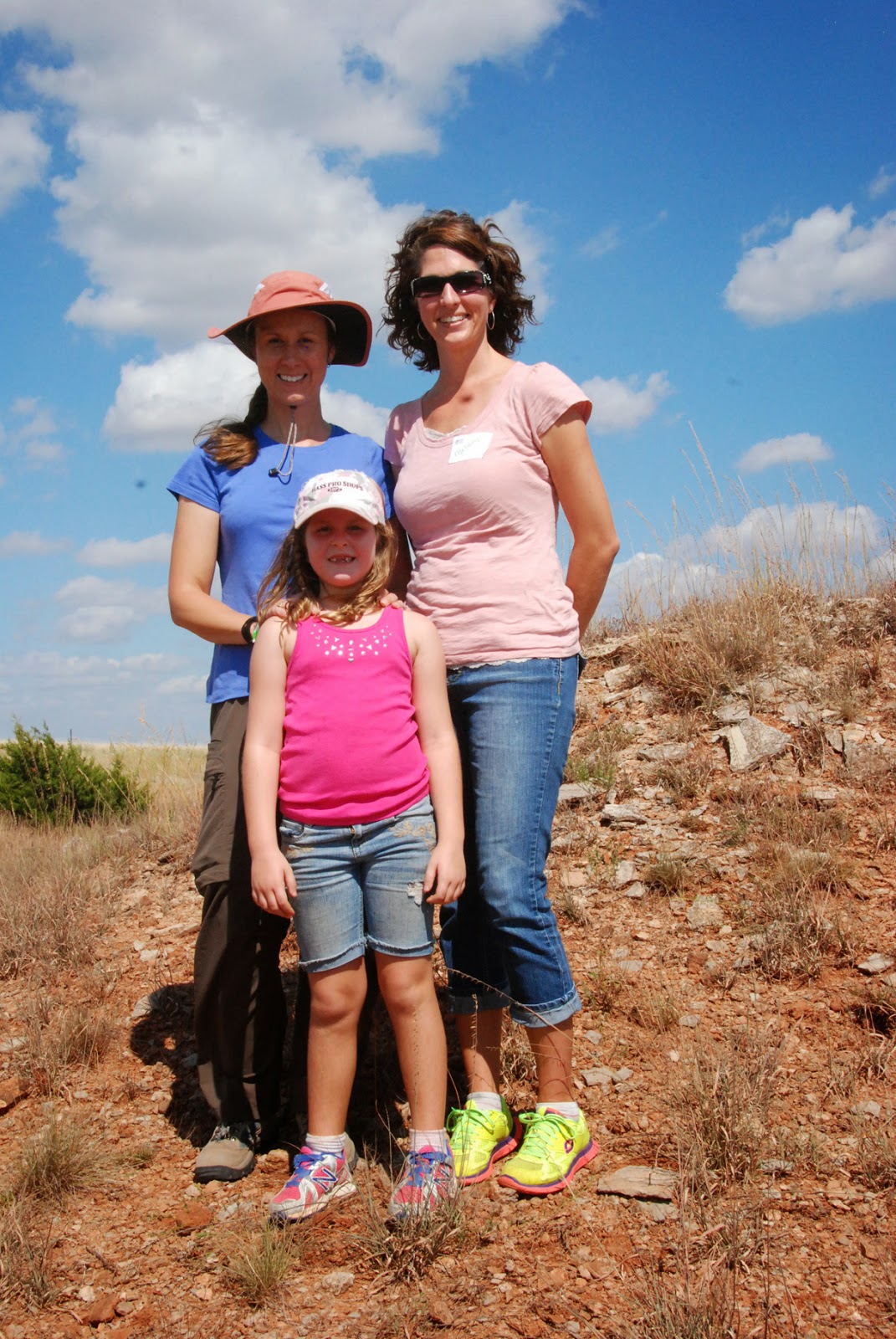 In the photo above, Theresa and Melanie (with Melanie's daughter Cami) are two friends I've met entirely through garden blogging.  It was so much fun to share time with them in person while poking around and looking at plants.  Cami seemed to have a great time exploring, too, and she and I explored our common interests in taking photos and looking at insects and rocks.

This year's AWW was based in Pratt, Kansas, home of the Kansas Department of Wildlife and Parks.  Not surprisingly, our first field trip was to the KDWP museum and to the pollinator garden right beside it, in the southeast corner of town.  The Pratt Master Gardeners have done a superb job of putting together a beautiful and interesting pollinator and native wildflower display garden, complete with a gorgeous pool, for which they received a well deserved award from KNPS.

Whispered on the wind were comments about possible expansions of the native plant display gardens, as well. Wouldn't that be awesome?! 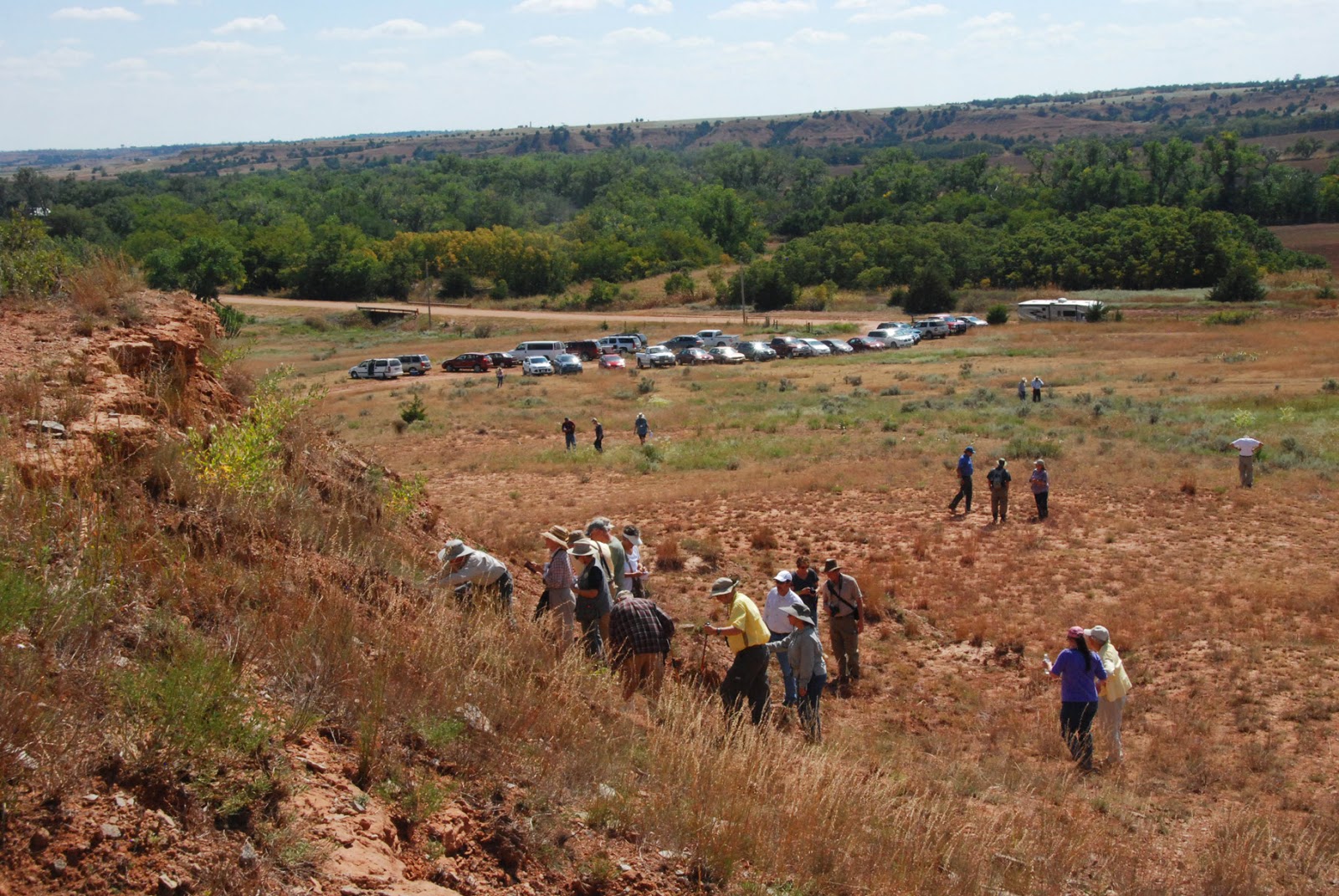 During the course of the weekend, we got to explore 5 different prairie sites - 3 in the Red Hills south of Pratt and 2 sand prairies east of Pratt.  The last site also included a section of the Ninnescah River, so we were able to do a little riparian scouting as well.  Almost all of the sites were on privates land that had been graciously opened up to us to explore, so I don't want to be too specific about the locations.  The photo above show the group moving away from our cars, beginning to explore a site in the rugged landscape near Sun City.

I have no idea what the official plant list (i.e. total species count) for the weekend was because I was doing some landscape gazing, some insect hunting, some photography teaching, and a lot of chatting...besides looking for flowers and grasses, of course. 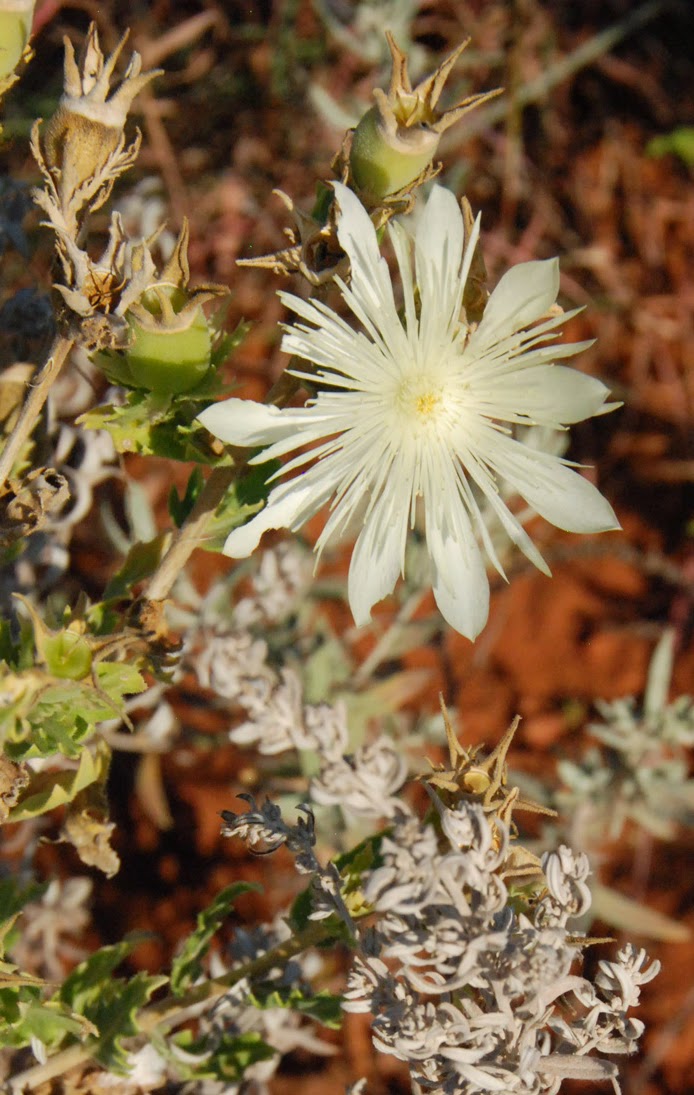 This delicate white beauty is the flower of the Sand Lily (Mentzelia nuda) in the Red Hills of Kansas.  Such a beautiful, soft looking flower on such a thorny, spiky plant! 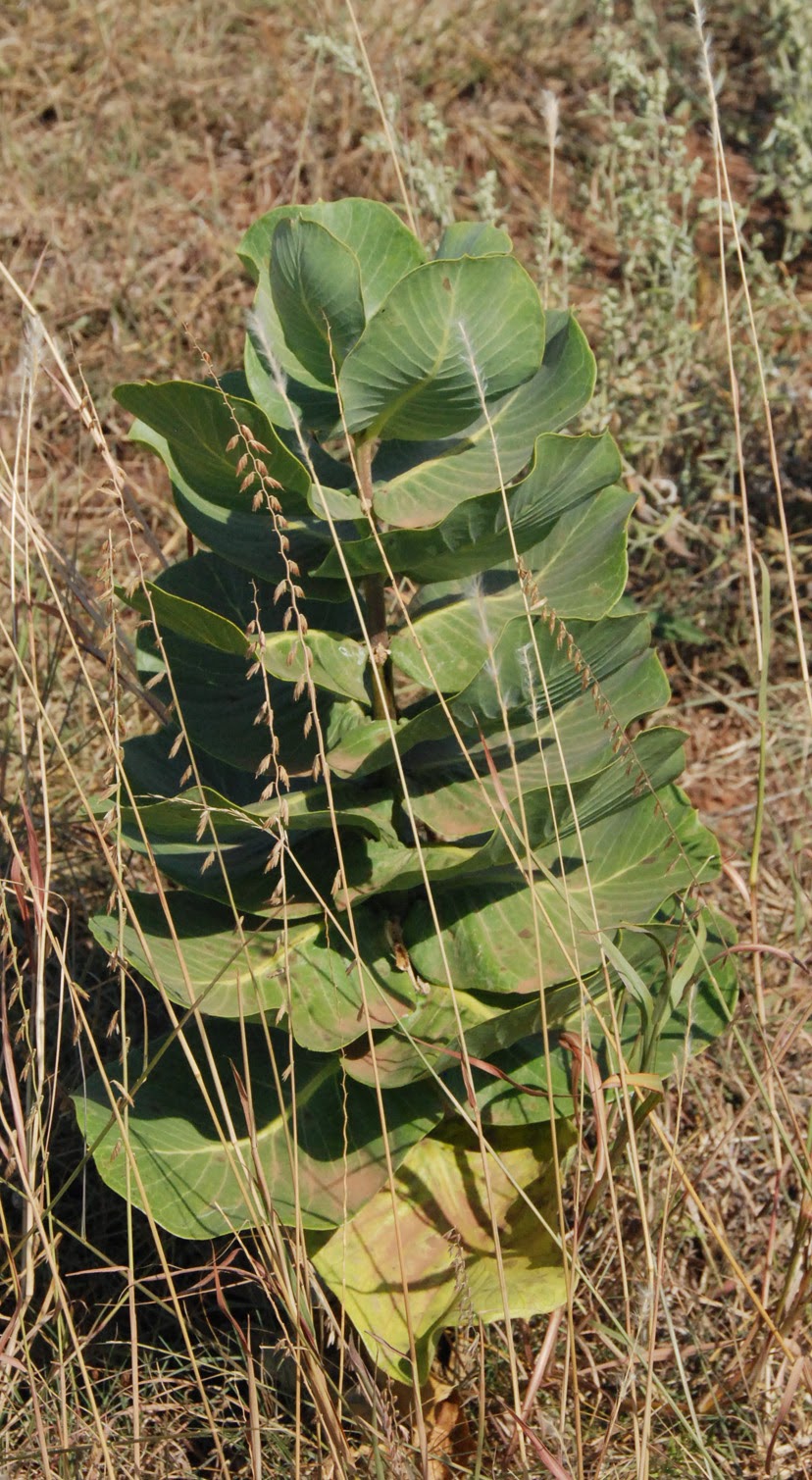 Broad-leaf milkweed (Asclepias latifolia) doesn't look all that interesting in this photo, but it really captured my attention in the field...maybe because it was SO green and lush looking in an otherwise scorched looking landscape.  The leaves almost looked like cabbage!  The remnants of the pods were actually rather small and cute;  they were found under and between the leaves, rather than at the top of the plant.  This is one that I want to try to find for our garden.  USDA Plant Profiles does show Sedgwick County as part of this plant's range. 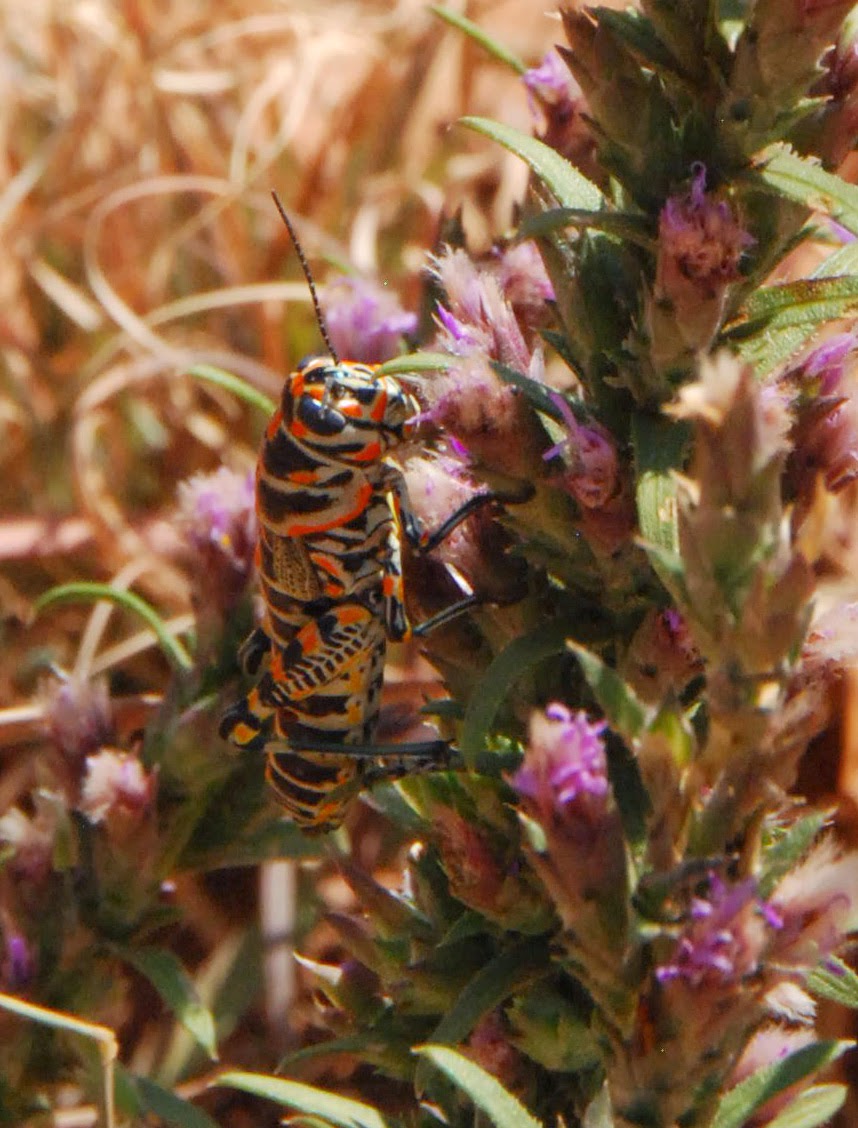 Isn't this guy gorgeous?  This is the rainbow grasshopper (Dactylotum bicolor), also commonly called the pictured grasshopper.  It's posing on dotted gayfeather (Liatris punctata), which was in bloom in all of the prairies we visited. 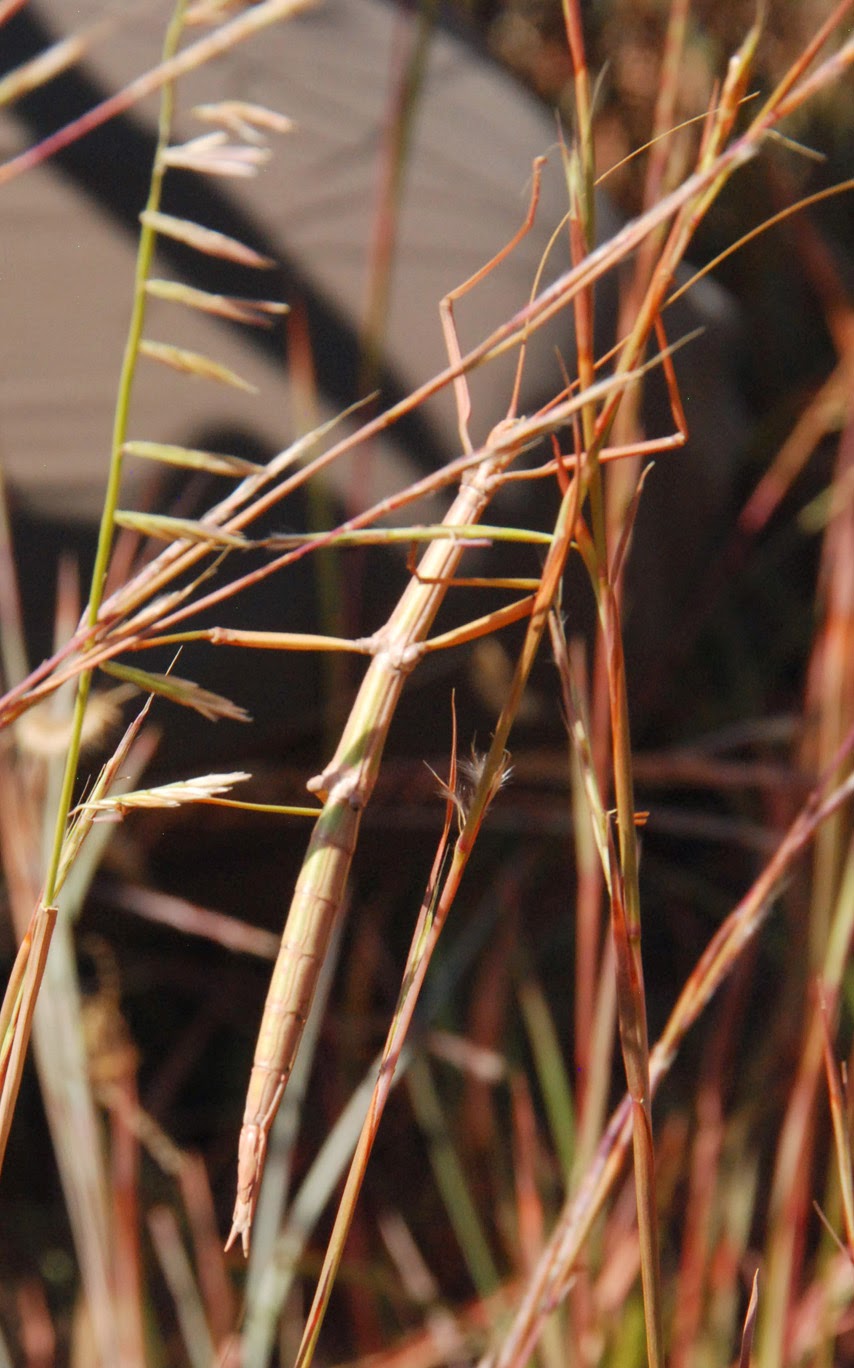 I was lucky enough to get a glimpse of this insect accidentally.  Do you see it?  It's a walking stick, colored perfectly to blend in with the grass.  The only reason I saw it was that it moved as I knelt down to look at a nearby flower.  Sad to say, I don't have a good enough photo of it to risk trying to get it down to the genus level, let alone the species level.  (I would welcome anyone's help on this matter, though.)

A last extra punch for the weekend was getting to hear Iralee Barnard speak about grass identification (an area in which I am sadly lacking) and then being able to purchase her new book, Field Guide to the Common Grasses of Oklahoma, Kansas, and Nebraska.  It's a great help and, after reading it, I already feel more confident in my ability to tackle a few of the more obscure grasslike plants that I'm seeing around our prairie at home, Patchwork Prairie.

Will I return for another AWW?  Absolutely!  It was an AWWsome chance to become active in a human community of interesting and fun plant nerds!  It was also an AWWsome chance to roam around and learn about plants in natural areas that are normally unavailable for "regular folks" to explore.  What wasn't to like?!
Posted by Gaia Gardener: at 12:16 PM

Well how is it possible that two Kansas bloggers have not connected until now? Must say I haven't heard of this society but I'm intrigued. Thanks for bringing to my attention.

Hi, Patrick! Thanks for stopping by. Yes, the KNPS is a great organization...and I'm always encouraging folks to learn about native plants and utilize them whenever possible, since they are the base of all our food chains!

I'm adding your blog to my blog roll, so I hope to "see" you more frequently now!

Jason, it's a wonderful event. I just need to prioritize it every year! Does Illinois have a native plant group?

We did have one guy from Hawaii. He apparently comes every year, combining the Wildflower Weekend with visiting relatives. Do you know anyone here in Kansas? We'd be glad to have you join us too!

Hello! Great photos and info on the Wildflower Weekend. I was glad to make the trip on Saturday to enjoy the presentations and tours. I learned so much and want to do that again. It is always interesting to see what other people notice when we're all sent out to do our own thing and learn from each other. So glad to meet you too!

It was definitely a lot of fun getting to dig into all your knowledge and get acquainted!! I'm hoping to catch another weekend of wildflower hunting as well!!

Sounds like a great day! The rainbow grasshopper is amazing.

You asked about the mowing -- my pasture is endophyte free fescue and I mow to keep the weeds from taking over. Spring and fall are growing time for fescue and what grows this fall will be forage for winter.

I am not however, mowing the fields closer to the creek. They are not pasture and currently full of wild flowers!

Yes I wanted to go this year however it was during our Bluegrass Festival and can't get time off on Friday. They are a great bunch of people. I enjoyed my last wweekend two years ago here in Winfield. I'm sure you did plenty of "botanizing".

Cynthia,
Sounds like a wonderful weekend! I love the rainbow grasshopper! And the Sand Lily flower. Thanks for sharing it with us!
Denise

I always learn so much from your posts; I have the broadleaf milkweed growing in a garden bed (by fortune, not planning) and was about to weed it out. And I've seen that rainbow grasshopper a number of times around home and thought he was just a normal variation.