Greg gave me a gift for Christmas last year - Access (the software program, which unfortunately doesn't automatically come with the home version of Office) so that I could begin to keep a coherent database of all the plants and animals that I've found on our 10 acres.

I have been slowly working on this project in the intervening months, and I'm far from done.  For the most part, I've been utilizing the photos I've taken over the years to remind me of what I've found and where I've found it. 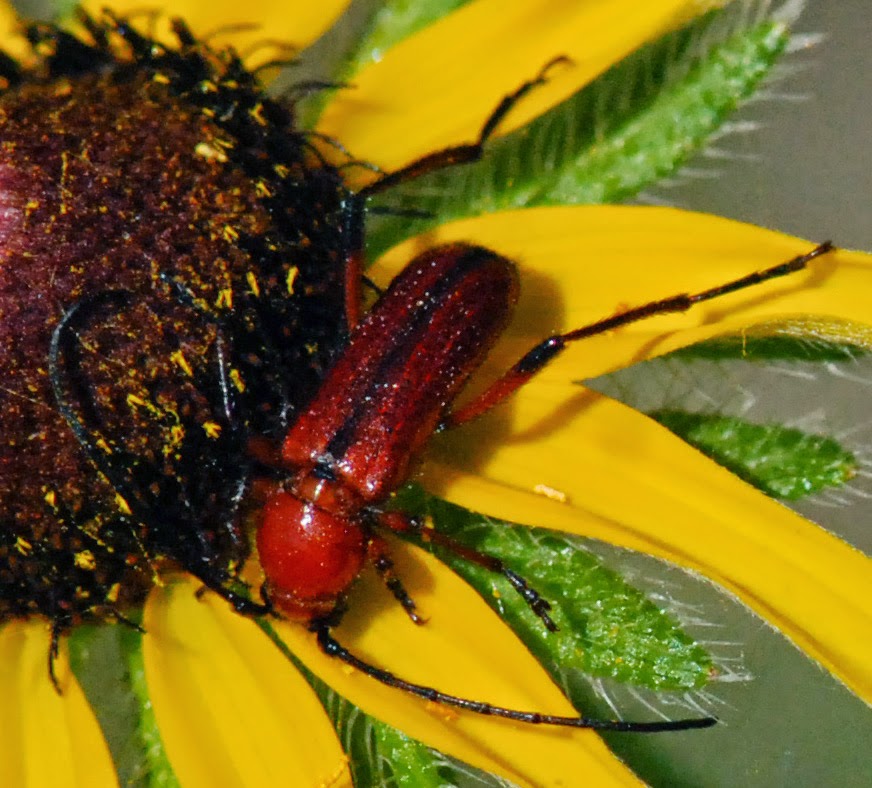 For example, I saw this flower beetle (Batyle suturalis) on Black-Eyed Susan (Rudbeckia hirta) in the Back Five early in July this year; both species are now in my database.

The wonderful folks at BugGuide.net are probably quite sick of me, as I've been submitting quite a few photos for their help with identification - which has been wonderful and greatly appreciated.  I can usually get an unknown insect down to order and often to family, using my experience and (if necessary) Borror and DeLong's Introduction to the Study of Insects for its excellent keys .  Then I try, utilizing BugGuide's online guides, to get the insect down to genus and species, but without actual keys specifying what I'm looking for, it can be hard.  It's at this point that I will submit an image for help.


Other species are often easier.  For example, I've been birding for years, so I have a reasonable familiarity with bird species and I can trust my identifications and the species lists I've been keeping since we moved in.  (Besides, it is much easier to figure out which of 450+ possible species a bird is compared to figuring out which of thousands of possible species an insect is.)  Below, for example, is a red-winged blackbird watching a little blue heron, who hung out in our lagoon for several days in 2009. 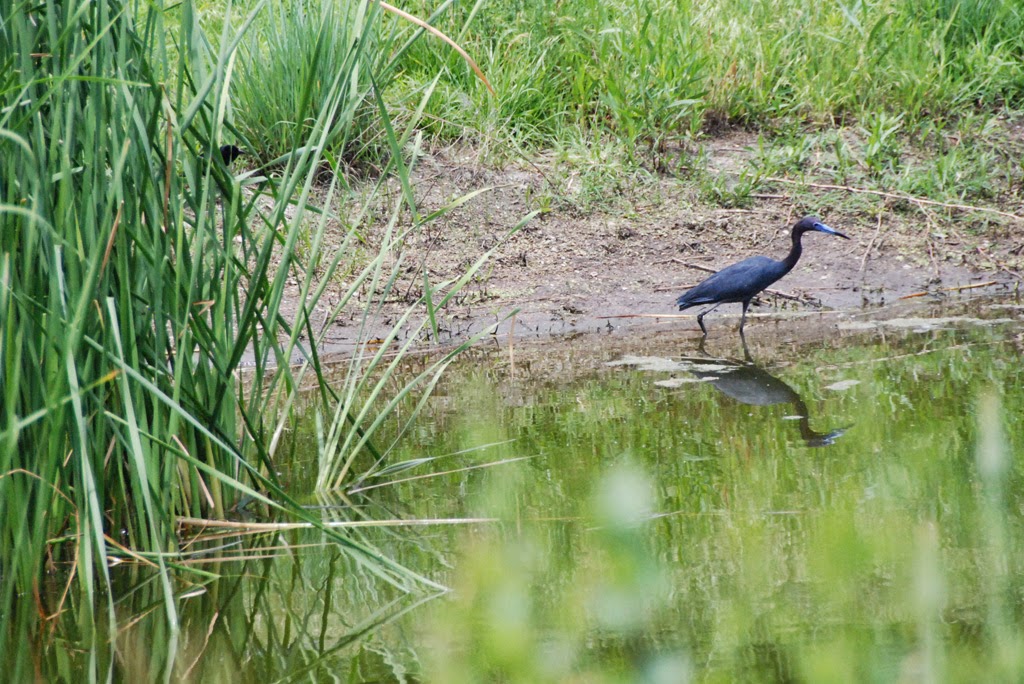 There are a variety of books and online resources I go to for plant identifications:  Michael Haddock's book and website on Wildflowers and Grassses of Kansas.  Janet Bare's book, Wildflowers and Weeds of Kansas.  Stephen's book, Trees, Shrubs and Woody Vines in Kansas.  And many, many more.

I've recently purchased Bradley's book, Common Spiders of North America, to improve my ability to identify the spiders that I'm seeing.  BugGuide is also useful with spiders, and I have a few other guidebooks (although most are much less comprehensive than Bradley's).  Below is a male jumping spider (Phidippus clarus) which I photographed last summer hanging out on giant ragweed (Ambrosia trifida). 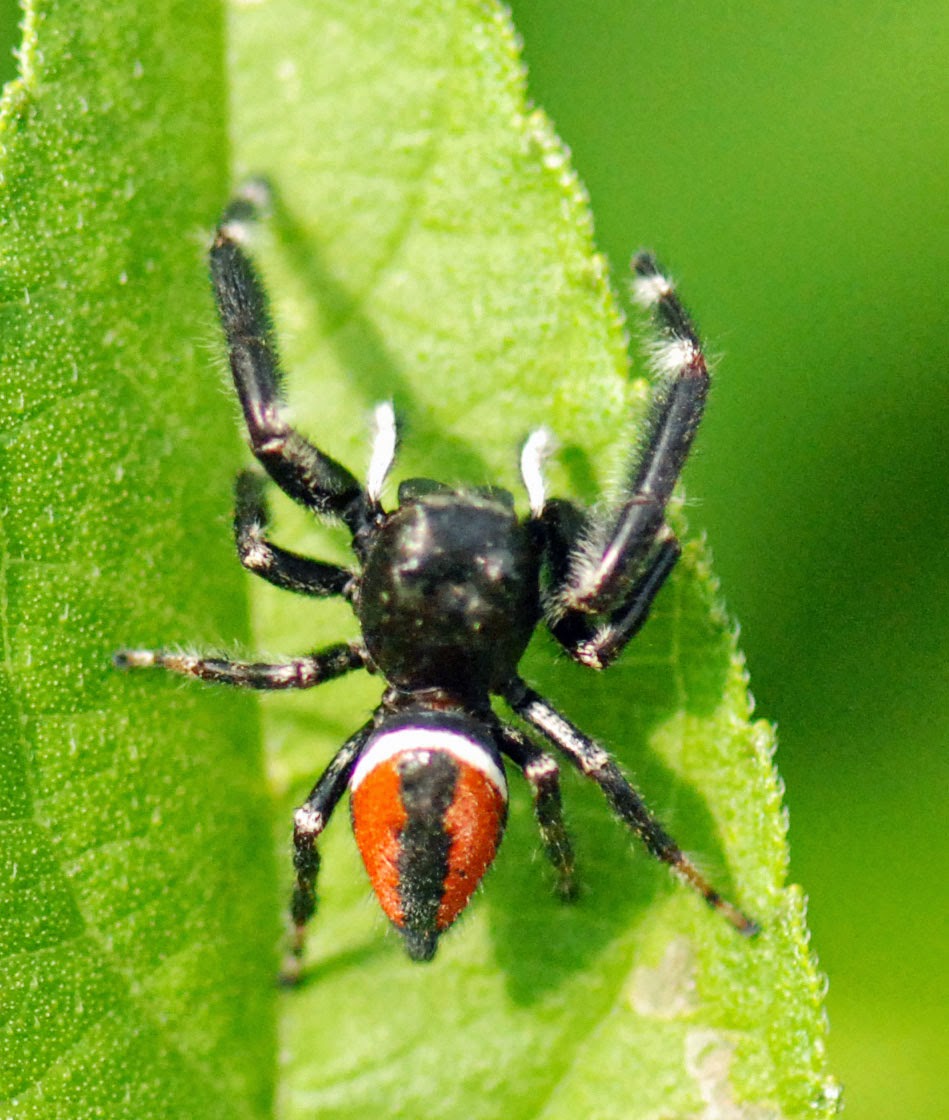 There are, obviously, many more references that I use to compile my species lists, but that isn't the point of this post.  Right now, according to my Access database, I have 201 plant species that I've found (or planted) on our 10 acres, 157 species of insects, 3 species of amphibians, 8 species of mammals, 1 species of snake, and 5 species of turtles.  (I have found quite a few more species of amphibians, mammals, snakes and turtles than that, but I haven't put them into my Access database yet.)  My yard list has 121 bird species so far.  That includes birds seen ON our property, as well as FROM our property (i.e. flying overhead during migration or seen from our property but physically on our neighbors' land).  I haven't started a list of spider species yet, but in looking in my photo organizer, I easily have at least a dozen different species.  Then there are the assorted invertebrates not covered by "insect" and "spider" catergories, species like prairie crayfish, roly-polies, and daddy longlegs. 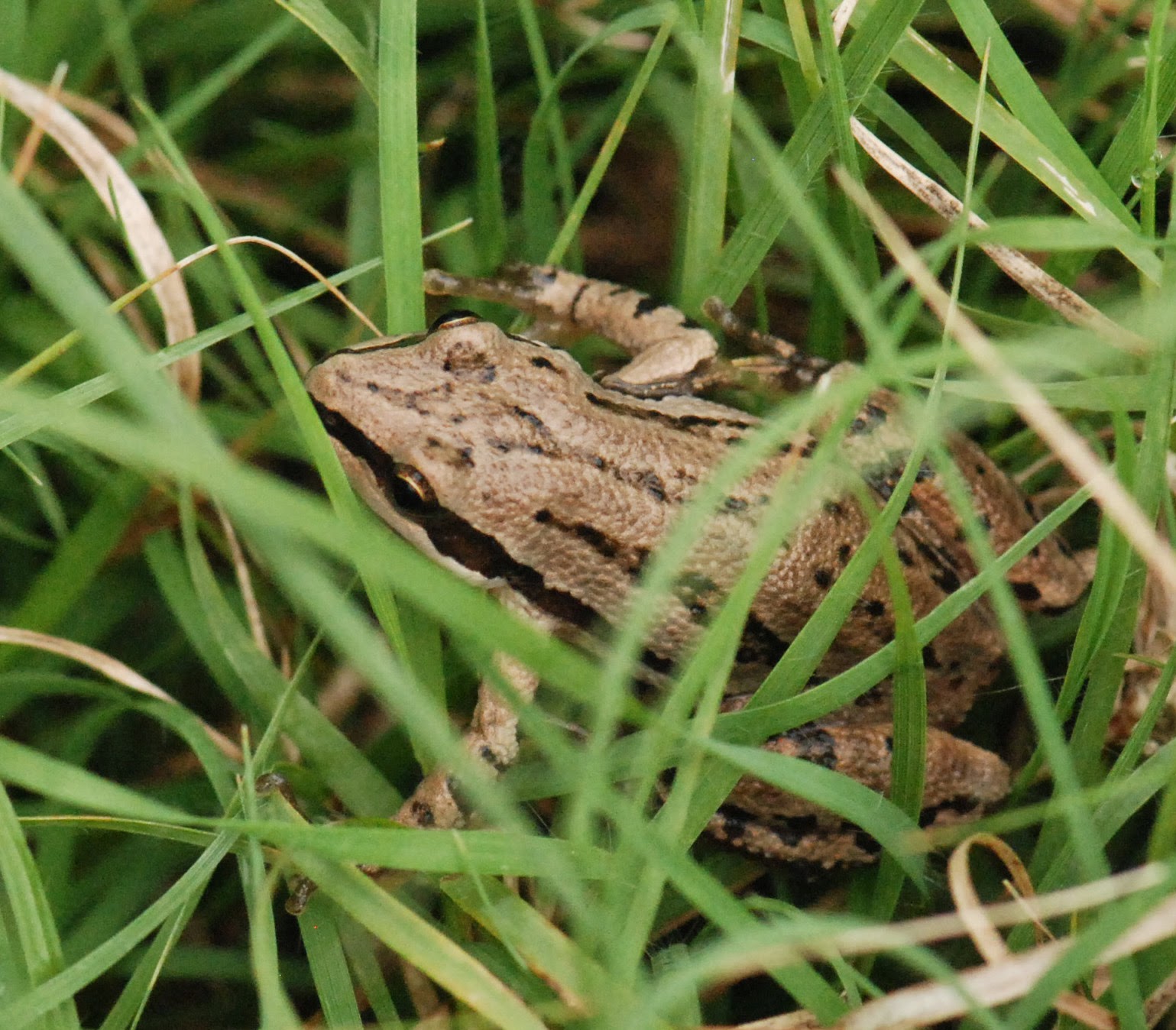 Here is a boreal chorus frog (Pseudacris maculata) in the buffalo grass (Bouteloua dactyloides) of our front lawn last August.


Why am I posting about this right now?  Because in yesterday's Wichita Eagle, there was an article about Chisholm Creek Park in northeast Wichita.  The article was actually about algae in the lake there, but there was a brief aside saying that "[t]he park is home to 163 species of plants and 214 species of animals...."  Chisholm Creek Park is large - 282 acres, according to the website of the Great Plains Nature Center, which is located there.

Does this mean that there really ARE that many more species on our little 10 acres than in Chisholm Creek Park?  No.  Absolutely not.  The species summary list on the Great Plains Nature Center site above does not give any number of species at all for invertebrates or grasses, for example, and their numbers for birds, mammals, reptiles and amphibians are all greater than the number I've observed on our property.  Chisholm Creek Park also has fish species, while we have no year-round water habitat except our lagoon.

I've just been more meticulous about recording (and identifying) the variety of species I've found here, particularly the species of insects and other invertebrates, than the folks in charge of that park have had the time or the inclination to do.  Still, it was definitely a psychological boost to realize just how diverse a piece of property we actually have!

Do you keep any sort of species list of what you've identified on your property?   If so, what sorts of insights or discoveries has that process given you?

I do not have an official database but have wanted to have one...I think I need to start this for plants, birds, amphibians, mammals..then add insects.

Thanks, Donna! I'm really enjoying this project - and it's giving me a much better knowledge of the variety of plants and animals that I'm seeing.

I'd highly recommend doing the same yourself, if you're are interested at all!

It is a good idea you are doing this. I wonder who in your area you could share the information with.

I enjoy using BugGuide. I find that even though I have a number of insect and spider books, I still can't figure out what many of the critters here are. I am just tickled at the diversity here on our small corner lot, but have not thought of documenting them. I am going to share this with our FB group, since there are a number of people there who have acreages.

Sue, I find that just collating the information is fascinating. I have at least 6 species of cicadas on or 10 acres, for example. And I have a wide variety of native pollinators, including orchard bees, leafcutter bees, and mining bees. Keeping the species list encourages me to take the time to figure out exactly which species I'm seeing...which in turn gives me the opportunity to learn about their role in the ecology of the garden. Even without sharing the full list with anyone, I'm gaining a huge understanding of what's happening all around me.

I'm pleased that you think some of the other FB group members might be interested in what I wrote; I think it would be awesome if more people started keeping records on what they're seeing.

The only species list that I have kept is for birds, but that's a great idea to keep records! We have 54 acres here bordered by a good sized creek, with waterways running to the creek, so good for attracting not only birds but amphibians, reptiles and fish. I wish I was (a lot) better at identifying frogs and insects.

One of my main reasons for gardening and maintaining the farm the way we do is to provide for as much biodiversity as possible. It's a reward for all of the work and wildlife can use as much help as it can get.

Sweetbay, It sounds like you have the perfect place to start keeping records like this. One of my favorite side effects from starting these records is the push it gives me to identify what I'm seeing. Another fun side effect is noticing when I've seen them before.

Speaking of which, I want to edit my charts to include that information. Right now I have dates for when I first see them and when I have taken a photo, but it would be interesting to keep a running tab on which months/years I see each species from year to year.

I hope you decide to do it - and then share the results with us!