It's the time of year when I switch from being unable to keep my eyes (and camera) off foliage, flowers, and insects to the time of year when I obsess over my bird feeders.  Indeed, sometimes I think that I almost prefer wintertime, with its stark silhouettes of trees and bushes highlighted against sky or grasses, its long vistas, and the constant color and movement of the birds in and around our home, to the lusher, more overwhelming and stickier summertime.

Off and on for about 20 years, I have participated in Cornell Lab of Ornithology's Project FeederWatch.  This is a citizen science project that relies on folks who feed birds in their yards to watch those feeders for two consecutive days every two weeks, then report back about what birds they are seeing and in what numbers.  The Project FeederWatch folks then track large scale bird population patterns from year to year.

It's not a rigid thing to participate in observing your feeders for Project FeederWatch - you can miss weeks, if necessary, while you are away on vacation.  You report the approximate amount of time that you watched during each watch period, so that if you're quite busy one morning, you simply note that you weren't able to put in any time watching at that time.  Since your data is being combined with observations from many, many other bird feeders in your area, the individual variations in observation time cancel each other out.  Best of all, in my opinion, you can now enter your data directly online - my weakest link was always the juncture between writing down my observations and getting them into the mail and back to Cornell.

Along with online data entry, FeederWatch now allows you to enter data for weekly observations, so I've taken to watching my feeders every Monday and Tuesday...when I'm home and have the time.  It continually amazes me how much more I observe when I have a set time and a reason to keep my eyes turned feeder-ward. 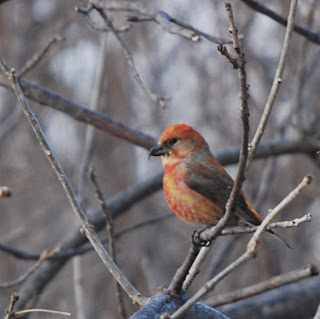 One year I saw red crossbills in my yard for a day or two. These are northern birds whose uniquely shaped bills are used to pry open pine cones to eat the seeds.  By watching my feeders, I'm much more aware of irruption years in the northern bird populations, years where weather conditions have decreased food supplies up north and pushed the resident birds there farther south than normal to forage for food during the winter. 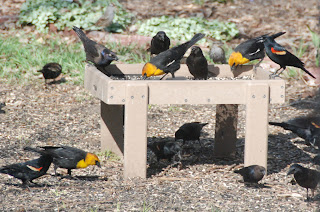 A couple springs ago, a small flock of yellow-headed blackbirds stopped by for an afternoon's snack.  I've seen these guys in large flocks at the big wetlands and reservoirs, but never in my "normal" landscape.  I do, however, usually have a couple red-winged blackbird males that actually overwinter in the area, rather than flying further south and reappearing in the early spring.  I'm not sure that I'd notice them without having them pulled in frequently to catch a quick meal. 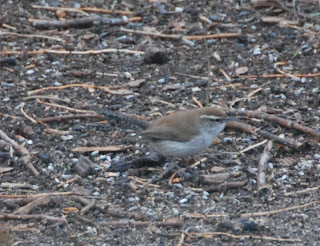 So far this year, one of my more unusual feeder birds is a Bewick's wren who's been visiting regularly, although not daily.  (Sorry for how blurry this and the next photo are - handheld, long lens, poor light!)  This is a species I've seen before, but only once or twice in any year and only for a day or so at a time, foraging in my winter flower beds or around the deck during the fall.


Along with spotting occasional visitors to my feeders, I'm also much more likely to see the resident Cooper's hawk or sharp-shinned hawk swooping through when I'm watching my feeders purposefully.  Sometimes I even get to see one of them feeding! 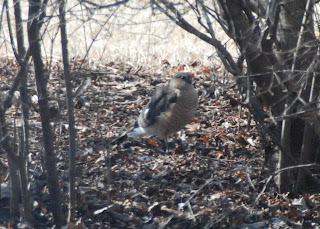 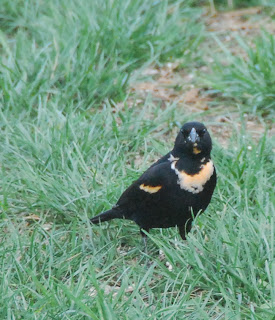 Occasionally I'll also see an abnormality among the common birds.  I've seen birds with injuries that seem to have healed.  More commonly, though, I see abnormal feather colorations.  This red-winged blackbird's unusual necklace is a case in point. 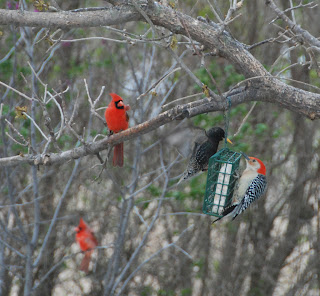 Sometimes I get to see birds behaving badly, too! Here a starling and a red-bellied woodpecker face off about who has the right to feed on the suet, while a cardinal acts as impartial observer!  (Conflict between these two species is actually pretty common during bad weather, at least at my feeders.)

Besides being more likely to observe more uncommon species of birds - or common birds that appear infrequently, unusual plumage or interesting behavior, I love the chorus of bird calls that I can hear faintly through the windows from all the birds attracted to my feeders.  Even better is that same chorus heard loudly every time I step outdoors.  Obviously the bird song isn't related to whether I participate in FeederWatch or not, but I do think it's more persistent and "multicultural" because of the feeders that I have up.

That said, I don't think that bird feeding really changes the species that winter around here.  I do, however, think that it brings the birds closer to where I can observe them frequently and comfortably from inside, increasing their activity in and around the house itself.

All in all, participating in Project FeederWatch is a very satisfying wintertime activity for me.  While I'm deepening my connection to my surroundings (and getting quite a bit of entertainment), I'm also getting the satisfaction of joining thousands of other bird feeders around the country to monitor certain bird populations around the country.  It's a win-win-win situation for me!
Posted by Gaia Gardener: at 10:09 AM

Ah. .I'm very jealous that you have so many cardinals!! We usually feed with black oil sunflower seeds and niger. Generally we see several varieties of sparrow, dark eyed juncos, robins, an occasional bluebird (though we are hoping to spot them more since we got our little bluebird house trail set up last April). We also had about 6 cedar waxwings stop by last summer before they went north, and I would love for some of those to stay around. We have mostly mature elm trees, and a mature cedar tree belt 50 feet north of the house. I have added several spruce varieties, and 3 pine trees that are getting large. The two new crabapple trees didn't set much fruit this past hot dry summer, and the two new oak trees seem to have perished too. It's sure been fun to watch the birds come and stay. .the project you describe would be fun to do, and could include the kids too! Thanks for sharing. .hope you will continue to show us your backyard friends!

If you keep a close eye on your cedar belt, you may very well see cedar waxwings at any time from now until spring. Last year I had a flock of about 50 that stayed in the area all winter.

There was a wonderful write-up on black cherry on another blog just yesterday:
It made me want to try one or two in the yard, for their ability to pull in wildlife.

I would think you'd have a reasonable chance to get cardinals in - I think trees and shrubs are their attraction and it sounds like you've got quite a few. The black oil should do the trick, as far as feeding. You might try adding some suet to see if you can pull in some woodpeckers, flickers, or chickadees. Water (heated in winter) can be a big draw, too, for lots of different birds. Maybe that can be a Christmas present!

I always keep an annual bird list for the yard. It helps me notice the changes in bird populations from year to year, besides making all the common birds seem new again every January!

By the way, the Wichita Eagle had an article saying that snowy owls are here in Kansas this winter! Maybe you guys will get lucky enough to see one!

I'll have to check out the snowy owl article. 2 winters ago we had at least a pair of owls that were here for the spring and summer. We didn't hear them last summer. I forgot to mention that I keep suet out, but have NEVER had anything eat it. .even if fresh. .boughten or homemade. .go figure!! We also have the new pond right out our front window. It's a little over one year old. .we love to watch what comes to it!! My plan is that by the time I have more than a few daylight minutes to myself (AKA, when the children all grow up and go away)I want to have a landscape that has already drawn multitudes of critters. .we are getting there. Would also be interested in the black cherry article. .I would like to get a few more fruiting things in our area that will draw birds. Love your feedback!!