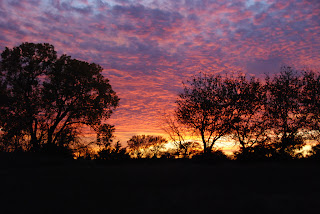 In the latest issue of onearth (Winter 2011/2012, p. 64), Jill Sisson Quinn began an essay with the the lines, "It was forbidden to say the sun was rising.  Instead, advised leaders of the Earth Literacy workshop at Genesis Farm in Blairstown, New Jersey, say you are going to greet the sun as we, on Earth, turn toward it."

My first thought was, "How hokey!  Give me a break.  That sort of hair-splitting sounds so ridiculous."

But the concept stuck with me, and I've decided that it isn't so foolish at all.

To say that the sun rises and sets puts the sun moving relative to us humans, standing still here on Earth.  It's really not that different from the ancient concept of Earth as the center of the universe.  In fact, you could argue that "sunrise" and "sunset" are almost verbal anachronisms left over from that belief.

But to say that we, on Earth, are turning towards the sun in the morning and away from the sun in the evening?  Not only is that more accurate scientifically, it sets up a totally different feeling of our place in the grand scheme of things.  Come to think of it, this way of looking at the pattern of our days is fairly similar to the sun salutation more common in the Eastern cultures.

To describe the photo above as, "My spot on Earth turning away from the sun, turning towards the dark," gives me a frisson of discomfort.  However, at the same time, thinking of the change from day to night in this way comforts me with a welcome feeling that I'm just a tiny part of a magnificent whole, a whole that functions perfectly well without any input from me.  As Eliza Doolittle said to Professor Henry Higgins in My Fair Lady, "Without your twirling it, the Earth can spin! Without your pushing them, the clouds roll by!"

In the final analysis, maybe we do need to search for a new way of thinking and talking about the daily movements of the Earth relative to the sun.  However, "My spot on Earth turning towards the sun, away from the night," and, "My spot on Earth turning away from the sun, towards the night," are horribly awkward and not likely to replace "sunrise" and "sunset" anytime soon.  Maybe it's time to speak of "turning to the sun" each morning? and "turning away from the sun" each evening?  A little humility never hurt anyone.

So what of destiny?

I think you're right. It does make a difference in how we understand our place in relation to the rest of the universe.

Intriguing points for sure! I think that the God's work is so intriguing!! There is a little clip on youtube from Francis Chan relating where we are on Earth. .to where we are in the galaxy!! WOW!! I wish I could remember the name of the clip, we watched it before our bible study from his book Crazy Love. .I encourage you to search it up and try to find it. AMAZING!! Enjoyed your thoughts! And you are right. .sunrise and sunset are much easier to say :-)

Greg, Destiny? I don't think I understand how destiny is involved here.