Maintaining or restoring a prairie requires burning it periodically. Prairies evolved with fire, and nothing refreshes and nourishes a prairie like the occasional burn.

That said, it's been 3 years since we burned the back 5 acres, so we knew that it would be a good thing to burn at least part of it this spring. The first time we burned it, we burned the entire thing, but this time we wanted to leave part of it unburned to make sure that we left some of the insect life undisturbed. Prairies are mosaics of habitat; burning different areas during different years helps increase the diversity of plant and animal life within any given acreage.

Last time we burned, we didn't get the burn accomplished until early April. Some of the early wildflowers were up and blooming by that time, so the burn set them back for the year. In general, the later you burn in the spring, the more you will encourage the (warm season) grasses at the expense of wildflowers. Conversely, the earlier you burn, the more you will encourage wildflower growth. This time, I wanted to give the wildflowers the best start that I could, so we decided to burn as early as possible. That turned out to be yesterday.

Watching the weather obsessively all week, Saturday morning looked very promising for several reasons. The winds were supposed to average about 6 mph all day, with a little increase to 9 mph around noon. (Around here, for safety reasons, the powers-that-be require you to burn when the winds are between 5 and 15 mph - a potentially difficult window to hit in the perennially windy prairies.) The skies were due to be clear...and Greg would be home to lead the burn crew.

I was also able to find several Master Gardener friends willing to help us out: Sid, Ron, and Linda. Sid has burned his family land many times; Ron and Linda were new to the process but excited to learn about it, as they are restoring tall grasses to their property as well.

Greg and I prepared ahead of time. Greg had mowed the firebreaks several weeks ago. Early yesterday morning, we placed buckets of water with burlap sacks and towels scattered around the burn site, plus took out the rakes and flat shovels that we had gathered. Sid brought a sprayer for water, which we filled up and took with us, along with a couple other sprayers of our own. I highly recommend the sprayers! 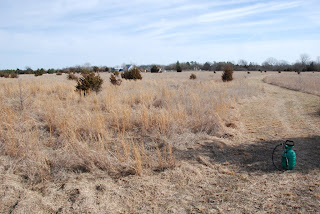 By the time we had all gathered at 9 a.m., had a little caffeine and sugar fix from coffee and donuts, and then walked out to the back 5, the wind was steadily blowing at 11 mph with occasional gusts to 13 mph. Although the wind was pushing the upper limits of safety, the direction was perfect for this plot of ground, so we went ahead and started the burn. The photo above is of the section we chose to burn, right before we set the initial (backburn) fire.

To keep the fire under control, we set the backfire and slowly expanded it. (A backfire, for those who aren't familiar with burning, is a fire set at the edge of the burn parcel which is farthest from the direction the wind is blowing out of. This means that the fire has to burn against the wind to move, keeping it much slower and smaller than if it were moving with the wind. As the backfire burns, it creates a wider and wider firebreak along that edge.) With the wind shifting between the north, northeast and full east, we were very careful to backburn a large area before beginning to set the faster, scarier head fires that travel with the wind. 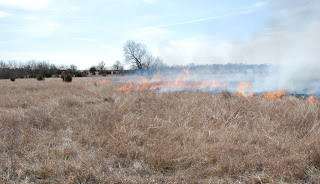 It was a challenge. I was SO glad that we had all 5 of us working, as the gusts were enough to push the fire into the closely mowed windbreaks and we had to stop those creeping flames before they crossed over into non-target areas. Once we got the backburn accomplished, though, it became much easier and faster. The second photo, above, shows the backfire, moving slowly against the wind. If you look really closely, you can see Sid to the left of the right-hand redcedar, keeping an eye on that edge of the burn. Overall, the burn took about 2 1/2 hours - slow, but a good, clean burn that did not cross the mowed firebreaks to make us test our backup firebreaks (the wheat field to the west and the overgrazed pasture to the south). 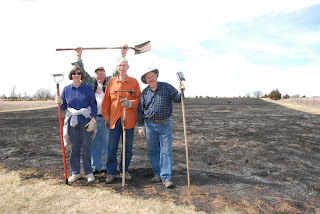 Here are 4 of the 5 prairie fire folks: Linda, Ron, Sid and Greg. We were tired and sooty but satisfied, with the grassland burned safely and well.

We're due to get rain tonight, then temperatures are predicted to be up into the 70's by the end of the week. I'm looking forward to a rapidly greening grassland and the first real chance to see if any of the overseeding that I've been doing is producing increased plant diversity.

Wow. Brave! I would be terrified of it getting out of control.

So glad it went as planned. You have a large area looking at what you burned behind everyone in the photo. I hope the rain, snow, sleet mix helps to get everything going. I love the fresh green sprouts after a burn. Hope the wildflowers perform beautifully!

Thanks! It's such a relief to get it burned safely.

The area we burned is about 2 1/2 acres - half of the 5 acre pasture/prairie remnant back there. So it's not a big area, as prairielands go, but it's more than enough to be an enjoyable learning experience for us.

By the way, Kitt, I have to laugh.... Your posts about working with bee swarms have me cringing in my chair!

Great job. I think I missed the window on our place this year. It's been too windy, too wet, and now it's getting too green. Maybe next year.