Discoveries after the Burn

It's been a good day - I've discovered a few things and, most importantly, learned something new.

I've been walking the burned area almost every day since we burned it, just open to whatever I might see. Here's what it looked like this morning.... 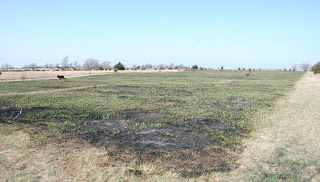 You can see how quickly the grasses are coming up. It's only been 8 days since we burned and there was absolutely no green visible after the burn. You can also see last summer's path meandering through the burned area.

I mentioned a couple days ago that within a few days I was also able to see our paths from 2 summers ago, as well as the network of prairie vole trails. Here's a photo, taken while standing in the fire break, of last year's path (going off to the left from the firebreak) intercepted by the prior summer's path coming in from the right. If you look closely, you can see a fair number of prairie vole trails as well. 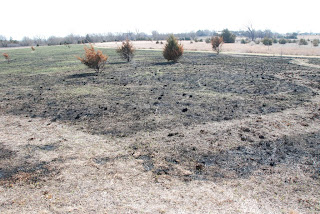 In the next photo, you can see a network of prairie vole trails and a mound that's greener than the surrounding area. That mound is the prairie vole colony itself. I believe that the mound is greener than the surrounding area because of extra nutrients brought up from the subsoil as the voles excavate their tunnels. Prairie vole "fertilization" in the area may play a role as well. Beyond the mound is another trace of our path from 2 summers ago. 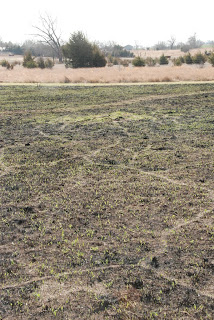 As I walked our path a couple days ago, I found this prickly pear cactus immediately adjacent to the mowed area...yet I hadn't had a clue it was there until after the burn! That doesn't say good things about my observation skills, I guess, especially since I knew there was a prickly pear somewhere in the area - I'd seen it after our original burn. 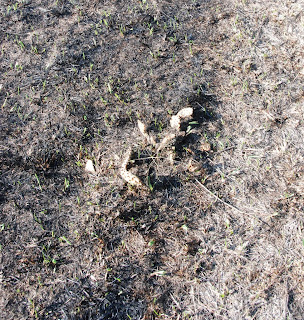 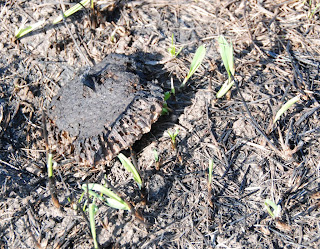 Most interestingly, near two of the coyote digs I found wasp nest combs that can only be from yellowjacket colonies. The photo to the left shows a close-up of one of the charred combs; the one below shows the same comb in the bottom left corner and the colony it presumably was dug out of in the top right corner. So now I'm questioning whether the coyotes were digging for voles...or whether they were digging for yellowjacket nests. It's an interesting mystery to ponder (and do a bit of internet research on). 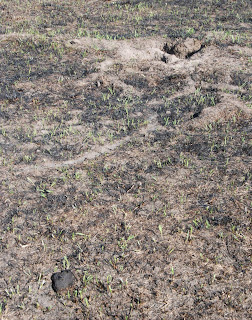 As I said, it's been an interesting and successful day already!
Posted by Gaia Gardener: at 10:34 AM