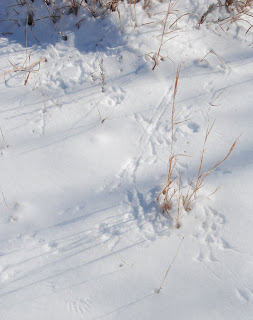 Sometimes it's hard to see grasses - even prairie grasses - as particularly important to wildlife. About 2 weeks ago, though, we got 9" of snow. I didn't get outside until a day or two later, but meanwhile the weather had stayed quite cold, preserving the telltale white blanket nicely.

I saw all kinds of tracks as I walked: coyote tracks, pheasant tracks, cat tracks, dog tracks, rabbit tracks. The photo above is of "tweety bird" tracks - sparrows? cardinals? goldfinch? - and it shows how carefully the bird(s) were hunting around the clumps of grass sticking up through the snow. If you look carefully, you can even see the wingprints of a bird as it was taking off, in the foreground, just left of center. The tracks create a record that even I, a rank novice at reading tracks, could understand. Sort of an Etch-a-Sketch in snow!
Posted by Gaia Gardener: at 2:11 PM