The internet can be a great resource. (Take note of that admission, please, Qkslvrwolf and Prairiewolf!) I've posted before about my psycho woodpecker holes in one of our cottonwood trees out front (http://gaiagarden.blogspot.com/2007/03/psycho-woodpeckers.html). We knew that another of the cottonwoods was dead (and have since cut it down). As they are leafing out, we've learned that the remaining 2 are half dead - literally. Through all of these discoveries, I haven't been sure what the causative agent was.

Because of some rather large holes in the trunks and branches, as well as the woodpecker holes, I've been relatively sure that the problem was a wood-boring insect of some sort, presumably a beetle, but the descriptions of cottonwood borer damage just didn't fit. The damage was too high up in the tree. When we cut the dead cottonwood down, we discovered large, deep galleries throughout the heartwood of the tree, not just confined to the layer immediately below the bark, which didn't fit with the descriptions of cottonwood borer damage either.

Last week I found the definitive clue: wood shavings collected in a fork of the tree, directly below one of the holes into the tree. When I looked closer, I saw similar shavings ("boring dust", I've since learned it is called) in most of the other holes.

That identified my mystery insect as a poplar borer, another large, long-horned (Cerambycid) beetle in the same family as the cottonwood borer. 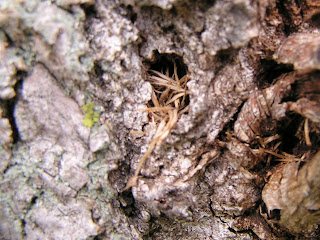 As I dug around a little more, I learned that these beetles typically have a 3-4 year life cycle, most of it as larvae within the tree. They actually maintain those holes to the outside as they grow, so that they can push the boring dust outside, unlike many other wood-boring beetles who only make holes as they exit or prepare to exit as adults. During the spring of their last year, the larvae pupate and then emerge as adults, who feed on foliage and twig bark.
I've looked for adults, but haven't seen any - which is apparently not unusual, as poplar borers reportedly don't come to lights at night and fly away readily when approached. However, I think it may still be too early in the spring for any to have emerged.
One interesting comment on one site was that poplar borers begin to cause the death of cottonwood trees when the trees reach 15 years of age. Coincidentally, that is the approximate age of these trees, based on the age of the house.
I'm pretty sure that these are cottonless hort varieties of cottonwood, because all of the cottonless cottonwood trees that I have seen die at about this size and level of maturity. Which leads me to ask, "Are the cottonless cottonwood hort variety clones particularly sensitive to poplar borers? Or are there other causes of mortality because they are just not resistant in general?" At any rate, give me a seedling grown cottonwood anyday, despite the 50% (or whatever) chance of it being female and producing cotton.
In all of my stumbling around to figure out what was going on, my only gritch is that all of the information I could find came from Canada and parts north, so I'm not sure what the length of the life cycle is here in Kansas. Indeed, there may be other variabilities because of the longer growing seasons too. Even Insects of Kansas didn't have the poplar borer listed, which was particularly disappointing, as they are listed as occurring everywhere that eastern cottonwood, Populus deltoides, occurs.
At least I know what's happening now. My curiosity, for now, is assuaged.
Posted by Gaia Gardener: at 8:49 AM