"Wonder of wonders! Miracle of miracles!" This morning was back to the more normal relaxing - and productive - morning walkabouts. In other words, no armadillo signs. Do I dare to hope that he/she has moved on to greener pastures?

Botanically, the garden is slowing down for the summer. The biggest and showiest bloom seasons have basically finished now. The azaleas and spring bulbs are long gone. The wisteria, iris and daylilies are done. Even the hydrangeas are almost over now.

The butterfly garden is still full of blooms, though, and the Knockout roses are continuing to flash their deep fluorescent pink flowers in big, bold clusters. (I've been careful to keep the Knockouts dead-headed, and I think it's paying off.) But most of the rest of the plant life is settling in for the long, hot, quiescent period, when it grows steadily but with no frills.

The animal life is increasing steadily, too. I've seen fledgling blue jays, mourning doves and cardinals in the yard lately, and I'm guessing that a couple of the "female" hummingbirds I've started noticing are actually this year's young.

Speaking of hummingbirds, I noticed an interesting quirk this morning. When a hummingbird stuck its bill into the salvia bloom to start feeding, it would almost always move the bloom up a little, changing the bloom's angle to a little above the horizontal. Does that make the nectar in the salvia blossom a little more accessible? Or is it simply a more convenient angle for feeding, based on the hummingbird's flight pattern and anatomy? 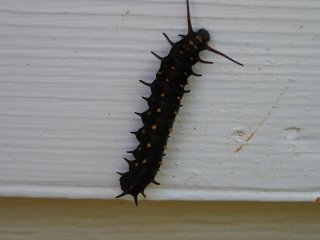 It's the start of serious caterpillar season, too. Last week I found a pipevine swallowtail caterpillar wandering around the deck, presumably looking for a good place to pupate. 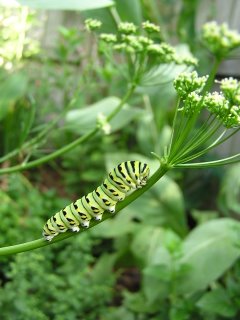 Then this morning I noticed two black swallowtail caterpillars on the volunteer parsley plant in the butterfly garden. The caterpillars are only 1/3 of full size, so I'll get to watch them for quite a while still. 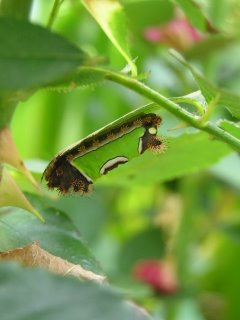 Last but not least, after noticing that one of my rose bushes was looking rather "eaten," I started looking closely and found two saddleback caterpillars hiding on the underside of nearby leaves. These funky looking guys are the larval form of a rather nondescript brown moth. If you see any of these guys, though, be careful. Those cute tufts of "hair" at either end of their bodies are actually stinging spines.


Everytime I go outside, I seem to notice something new or different. It makes it hard to stay inside!
Posted by Gaia Gardener: at 4:37 PM

Maybe the birds will help keep the caterpillar population in control?

Where I'm from, they will infest trees, build a nest, and eat so many leaves they'll kill it, so if they are the wrong type they aren't very welcome!

I always count on the birds to keep the caterpillar populations under control and, most of the time, they do an admirable job!

Not knowing where you are from, I don't know what kind of caterpillars you are referring to, but it sounds rather like tent caterpillars. They make the trees look terribly ugly for a season, but usually the trees have no problem recovering.

It takes a rather ridiculous amount of courage these days to refrain from spraying and let the trees recover naturally. But I've found that being courageous in that way allows the anti-caterpillar squads to gain ground, lessening the problem in the future.

Sometimes it's really hard, though!