Acceptable and Unacceptable Changes to the Neighborhood Landscape

At the beginning of June, we will have lived in this house for 3 years, although I didn't start gardening in the yard until the fall of that first year.

This is what the front yard looked like in mid April, 6 weeks before we moved in.... 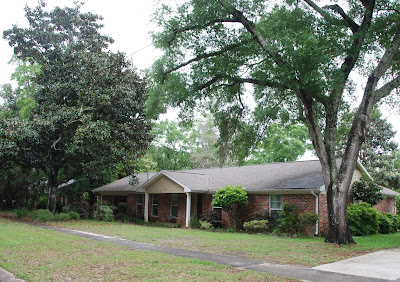 While the yard was neatly trimmed and mowed back then, I found it sterile and boring.  Naturally, when I began gardening, I started adding native plants and removing non-natives.  As usual, I had more of a general idea of what I wanted the garden and yard to be, rather than any firm plan.  Most of all I just wanted my yard to be a small wildlife refuge in the midst of suburbia.  And I wanted it to be pretty, too, if at all possible.

I kept the huge canopy trees, a southern magnolia (Magnolia grandiflora) and a laurel oak (Quercus laurifolia).  They are both native and, while I probably wouldn't have chosen either species to put in their spots, they add gravitas and presence to the yard.  Besides 3 dwarf yaupons (Ilex vomitoria) and a few of the lawn weeds, they were also the only native plants growing in the front.

Here's a recent photo of the front yard.... 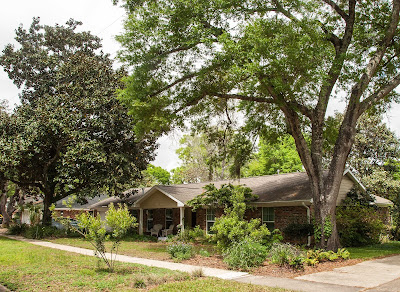 Only now are the garden beds beginning to show up and look like gardens.  "A year to sleep, a year to creep, a year to leap."  The old maxim holds true yet again.

Having added such a wide variety and large number of plants, it's odd to me what people notice and comment about in my front gardens.  I had a neighbor tell me how much she liked the "yellow flower", golden ragwort (Packera aurea), shortly after I planted it next to the sidewalk, under the magnolia. 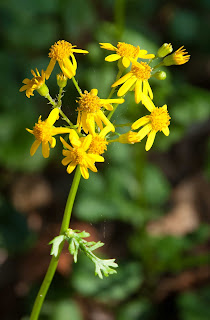 Ironically, I love the foliage of this plant, which is low, dark green, shiny, and rich looking to my eye...but I don't particularly care for the flowers.  I do love their cheerful presence early in the growing season, though.  Golden ragwort are the first native flowers to bloom in my garden.

Recently, a woman who came by to pick up wild strawberry plants I was giving away commented how much she liked my columbine and blue eyed grass.  That made my day!  She even knew the names!

Here's one clump of the blue-eyed grass (Sisyrinchium angustifolium) she was admiring, by the front porch, ... 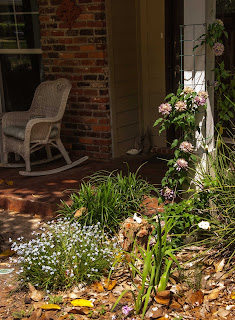 ...and a closeup of blue-eyed grass blossoms in the shade nearby. 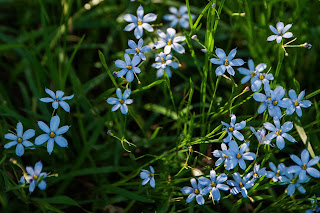 Then here's a picture of the other species she was admiring, eastern red columbine (Aquilegia canadensis), taken a couple weeks ago when it was first starting to bloom. 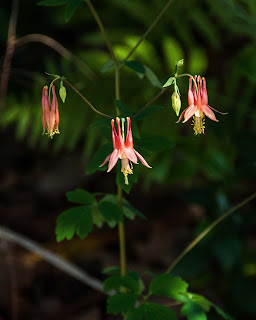 As much as I love blue-eyed grass and columbine, I am surprised that no one has ever mentioned my downy phlox (Phlox pilosa), which I think is beautiful.  A tidy mound of cotton candy pink at the front of the flower bed, this classy little plant blooms nonstop from December through to the end of May and even into June.  Perhaps to most eyes it just looks like a standard annual bedding plant? 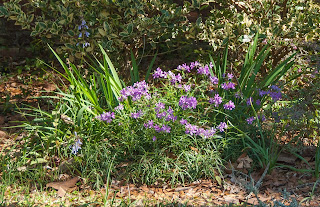 The spiderwort (Tradescantia ohiensis), which is spectacular right now, doesn't get much mention either - although another neighbor has started telling me when he sees it popping up in wild areas around the neighborhood, encouraging me to go dig it up and add it to my gardens.  Since he lives 2 doors down from me, I figure he must like it at least a little or he wouldn't be encouraging me to plant more. 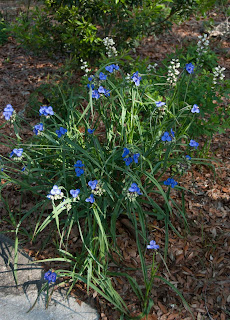 In particular, though, one plant has caused unexpected reactions:  powderpuff mimosa (Mimosa strigillosa), a relative of catclaw sensitive briar, for those of my friends who garden in the prairie.  Greg loves groundcovers, so we thought we'd try putting this low growing plant, with its pretty foliage and its blooms that look like sparkling pink pompoms, up front.  We are encouraging it to spread out and fill in the hell strip between the sidewalk and the street.  To our eyes, it's prettier than weedy grass any day! 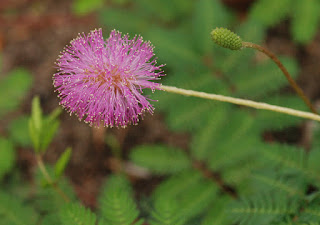 Ironically, no one seems to notice the blossoms (which are, in my opinion, very cute and very hard to miss), but the foliage makes people uncomfortable - superficially it looks too similar to chamberbitter (Phyllanthus urinaria), a.k.a. gripeweed, a common lawn weed down here.

Unfortunately, I inadvertently played into this concern by planting the first two powderpuffs at the base of a newly planted wax myrtle.  I didn't take the time to clear a large, carefully delineated "bed" for the powderpuff to spread into.  I've done my best to keep the grass weeded out of the spreading groundcover, and the powderpuffs have filled in marvelously well...but there isn't a defined edge to help people "read" this part of the landscape easily.  That was a mistake on my part.

I'm going to keep working on the powderpuff, but another element I added to our front landscape is slated for removal:  the small brush pile under the big laurel oak - at the base of its trunk in the photo below. 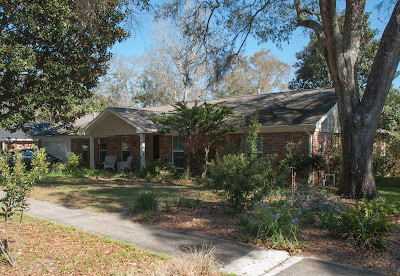 Living in such a high humidity environment, many woody branches are covered with fascinating, feathery mini-gardens of lichen.  When several small branches ornamented in lichen "lace" fell in the front yard, I couldn't bear to put them out for the city to pick up.  Instead I used them to construct a small brush pile towards the back of the bed.  Here is a photo of a branch covered in lichen that fell in our yard... 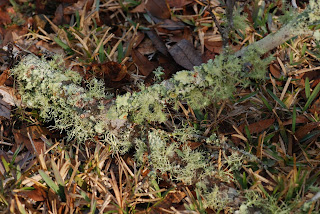 ...and here is a closeup of that lichen. 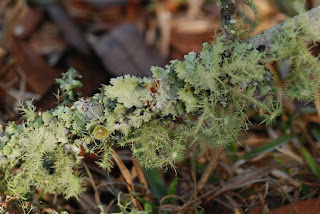 Several people have asked why I'm leaving "that pile" there and I've taken the time to tell them about the benefits of brush piles, but I've decided to move the pile around to the backyard where it's nobody's business but ours.  The pile's been growing a little faster than I was planning, anyway, as more branches have fallen out of the oak.  I still can't bring myself to send those gorgeous lichens off with the city dump trucks!

Despite my occasional misstep, the plants I've put in the front gardens are taking hold and growing well, getting taller and broader, blooming more fully.  I'm far from the world's best landscape or garden designer, so my color and form combinations are rather haphazard, but I get a buzz of pleasure now when I drive up to our house or walk outside.  For example, when I left the house this morning, I noticed a towhee foraging among the skullcaps by the sidewalk, and there are almost always at least a few butterflies, native bees, or honeybees diligently working the flowers.  Little brown skinks commonly rustle through the leaf mulch and green anoles prowl the shrubs and perennials, males puffing out their salmon-colored throats in displays of pride and power during these lengthening spring days.

I hope my human neighbors come to enjoy my wilding landscape.  I love that the wildlife is making itself at home outside my house...and it makes this yard home for me now, too.
Posted by Gaia Gardener: at 4:53 PM

I love what you've done. I'm considering adding some sunshine mimosa and wonder where you got yours. I ordered some seeds from the Florida Wildflowers Growers Cooperative and should get them soon. Do you have any recommendations for blue eyed grass? I want to be sure that when I get it I put it in the right place. Thanks for making this post!

Thanks for stopping by. And thank you especially for the sweet compliment!

I got my sunshine mimosa from 7 Pines Native Plant Nursery in DeFuniak Springs and my blue-eyed grass from Mobile Botanical Gardens.

My blue-eyed grass is doing well in everything from relatively full sun to almost full shade. I'd say it does better with more water, but handles drier situations without too much issue down here. (My daughter has it also and hers gets no extra water at all; mine gets watered with the grass - 2X or 3X a week for 45 minutes or so during warm and hot weather.) Our soil here is VERY sandy, which I think is important to factor in, too.

It does look pretty. I think it's a huge improvement to the way your house looks from the street, and that's not always the case with some plant-obsessed people!
Your neighborhood is luck to have you :)

Thanks, Frank. I appreciate your kind words!

Great job, Cynthia! I love what you've been able to do with the landscaping. Some of my perennials are just beginning to take off, too. The golden groundsel I got from you has spread to a 3 foot mass.

Donna, that is really exciting! It's loving its new home, for sure. I would love to see how your gardens are progressing.

Thanks for stopping by.

Hope all's well with you and Phil. Miss you guys!