A Hawk, A Sapsucker, and A Squirrel Went Into a Yard.....

A hawk, a sapsucker, and a squirrel went into a yard and ... found it appealing enough to stay for a while.

There is no punchline to this rather pathetic attempt at imitating the old joke.  I'm actually referring to our yard and I get profound pleasure out of sharing it with other animals.  That's no joke, indeed.  It's great fun to see the variety of creatures that peacefully cohabit with us, if not always with each other.

It's even MORE fun when they pose for a picture for me!

So, just for kicks and giggles, here are some of the critters I've been seeing around lately....

About 10 days before Christmas, I was doing laundry and noticed a movement outside the laundry room door.  Imagine my delight at seeing a young yellow-bellied sapsucker female (Sphyrapicus varius) working earnestly on the side of the pignut hickory tree (Carya glabra) that's located nearby.  I got a huge series of shots, but they are all essentially the same, so here's one that shows her classy yellow belly feathers beginning to grow in, as well as her sadly inadequate ability to line up the holes that she was boring into the side of the tree. 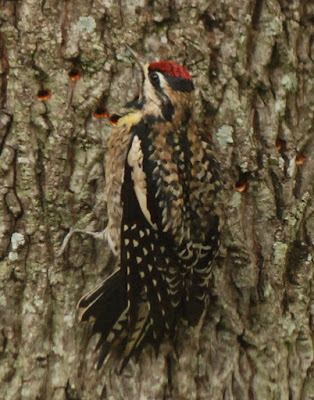 A question for anyone who's a serious birder: is this a common phenomenon in young sapsuckers, or is this particular individual just having unusual difficulties with her grasp of horizontality?  Here is an expanded version of how she "lined up" the holes she was drilling.

Speaking of pignut hickory trees, the Eastern Gray Squirrels (Sciurus carolinensis) love the hickory nuts that the trees produce abundantly each fall and they frequent our yard and gardens throughout the winter.  They don't necessarily like to pose, generally being much too busy to wait around that long, but sometimes one will humor me. 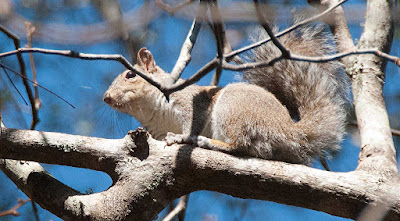 Once I downloaded the photos this guy "sat" for and looked at him a little more closely, he (I'm just guessing at the sex) looked like the squirrel equivalent of a tomcat.  Seriously - do squirrels fight each other?  How else would this guy's ears have gotten so tattered? 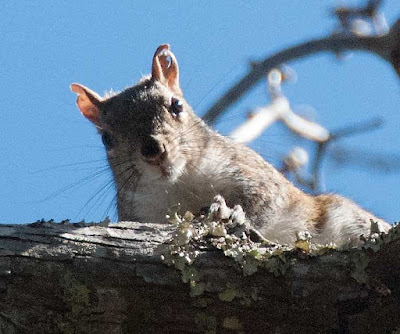 Most often I see the squirrels using our trees as a sort of squirrel highway along the lakeside, but they obviously stop and refill their bellies, too, based on the number of gnawed open, empty nuts I find. 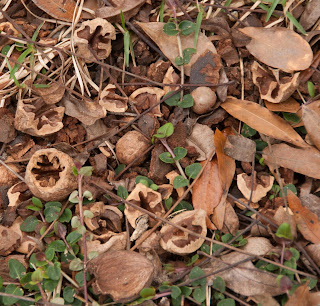 On the same day that Mr. Squirrel posed for me, February 5th, I was able to get a photo or two of what I believe is a question mark butterfly (Polygonia interrogationis).  It didn't let me get very close, so I was glad that the photos turned out as well as they did. 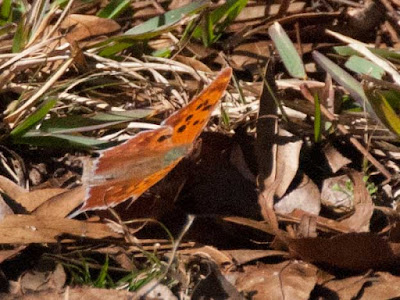 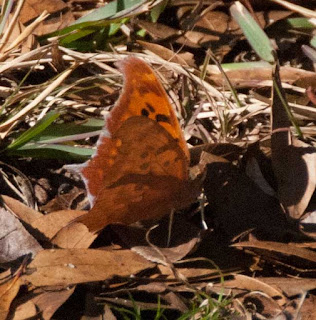 The lavender wing borders are particularly stunning when you can see them as clearly as you can in these photos.

Question marks, commas, and goatweed butterflies, which all look fairly similar to me, are some of the first butterflies I see each spring, presumably because they overwinter as adults.

Four days later, on February 9th, we had a pair of stately visitors on our lake:  Brown Pelicans (Pelecanus occidentalis).  We don't seem them often on our little body of water, but I sure love it when they grace us with their presence! 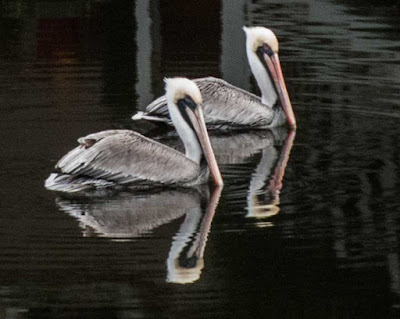 I remember when brown pelicans were endangered, thanks to DDT, which made their egg shells so thin that they cracked from the weight of the mother bird incubating.  Because of the Endangered Species Act, the populations of brown pelicans and ospreys and bald eagles and many other animals have come back to healthy levels and it is relatively easy to have a sighting of many of these species now if you look in the right habitat.  It deeply saddens me that the current administration, with the aid of Congress, is doing away with so many important environmental protections that have helped in so many ways during the last 40 years.

But back to more positive thoughts and sightings....

Evidently a timely pattern had developed for me during February, because another 4 days later, on the 13th, I was out photographing again.  This time I captured the first damselfly of spring, a young female Fragile Forktail (Ischnura posita).

One of the ways to sex many dragonfly and damselfly species (for humans, at least) is by their color.  The pale blue of the damselfly above indicates both her age and her sex.  A few days later, I saw and photographed a male fragile forktail in the same general area, identified by his bright green color in the same pattern as the young female. 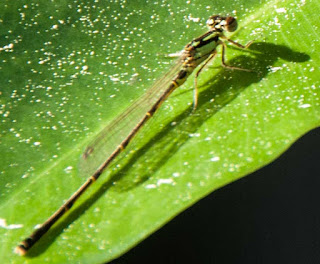 Fragile forktails are common damselflies of the eastern United States.  Unfortunately, I have not found any information explaining their common name;  it's an interesting enough name to have a fun history or explanation behind it.  Fragile forktails are fairly easy to identify by the colorful interrupted line that forms an "exclamation mark" on the each dorsal side of the thorax.

On the same day that I saw the male fragile forktail, I saw this little treefrog resting on the back porch screen.  I had just come outside when I saw it and snapped this photo;  my camera lens fogged up in the early morning humidity and by the time it unfogged, this little guy had taken shelter in some well hidden lair. 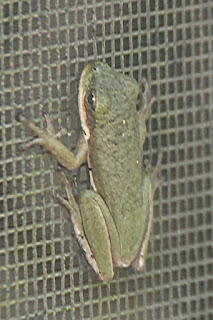 With only one, slightly blurry, photo to go by, I'm not sure as to his full identity, but he sure looks hungry from the winter's lack of insects to me.

Finally, last Saturday I was sitting on the ground and waiting beside a couple ground-dwelling native bee nests. 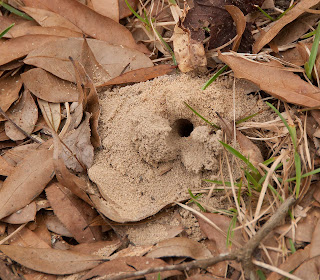 Call me crazy, but I was hoping to catch a glimpse of a bee coming or going, or better yet to snap a photo of one, so that I could identify the bee species responsible for these cute little "volcanoes" in the yard.  While I didn't see a bee, I sat still for long enough that a Red-shouldered Hawk (Buteo lineatus)flew in and perched in the hickory tree right above me.  He/she let me take several photos, but when I turned the camera sideways to fill the frame better, I'd moved too much for the hawk's comfort and it flew off. 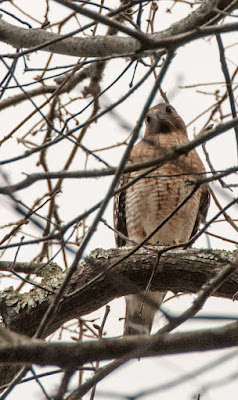 Red-shouldered hawks, along with Cooper's hawks, seem to be the most common hawks in our neighborhood.  I hear them almost every day and see them most days, not infrequently perched in one of our trees.

While I did get the photo of the hawk, unfortunately I was NOT able to get a look, let alone a photo, of the bee responsible for any of the ground nests in the yard.  One of these days I will be patient enough AND be in the right place at the right time to do that - I just have to keep trying!

Meanwhile, I'm pretty happy with the wildlife menagerie that I've been privileged to see and photograph this winter.  Best of all, the experiences are free and right outside my door!

So many wonderful critters! I, too, keep hoping to catch bees coming and going from their nesting holes. I did once see a bumble going into what I thought was a chipmunk entrance hole.

I am tickled for you to see these lovely creatures out your door! Thank you for sharing them with us. I wonder what the reason is for the squirrel's roughed up ear. I may hear an occasional squabble with the squirrels here in our Nebraska neighborhood, but not often. They like to chatter at Ruby and I when we are out in the yard or garden. Reading your post reminds me I need to check my phone to see any photos of the hawk we saw in the sky yesterday turned out.

Gail, My first instinct was to laugh about seeing a bumblebee go into what you thought was a chipmunk hole...and then I realized that many critters utilize holes that are already completed! It may well have been a chipmunk's hole, at least originally. I know many animals cohabit with gopher tortoises here in the southeast and with prairie dogs on the plains. Anyway, you're one up on seeing a bee enter a hole in the ground compared to me!

Thanks for stopping by.

Sue, do you have eastern gray squirrels or fox squirrels in your area? We usually had fox squirrels out in the country, but I think that there would be gray squirrel populations in the bigger cities. I hope your hawk photo turned out - and that we get to see it on a blog post!

Thanks for stopping by!