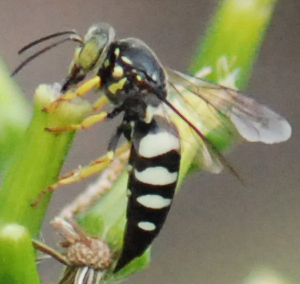 When I first saw this good-sized wasp, I thought it looked a lot like a cicada killer.  I couldn't get very close to it to get decent photographs, but I was able to get good enough images that I knew it wasn't my old friend from Kansas.

Tonight, after I cropped the photos to more closely see the insect I had "captured", I tabbed over to BugGuide.net and started looking around.  After a while, I thought I had probably figured out the identification...but the eye color was wrong and the markings on the thorax were not quite right either.  So, I posted the photos and asked for help. 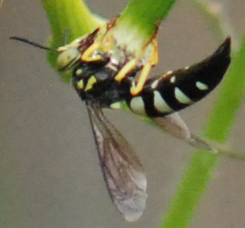 Meanwhile, I continued searching through BugGuide, looking for a better match to my mystery wasp.  As I was checking out a particular species, a sand wasp that is known only as Bicyrtes quadrifasciatus, I saw a couple photos that looked remarkably familiar.  When I checked my email, I was stunned.  My original identification had, indeed, been wrong;  the species I was looking at now was the correct species; and - most surprising of all - one of the contributing editors at BugGuide had already made the identification and moved my photos to the correct spot!   Those WERE the photos I had just uploaded a few minutes before.

BugGuide for the win!

So why do I try so hard to identify "my" insects to the correct species?  This wasp is a good example.  By learning the identity of this wasp, peacefully feeding at a flower, I learned that I host a species of solitary wasp that raises its young completely on true bugs, on insects like stink bugs and assassin bugs and maybe even milkweed bugs. 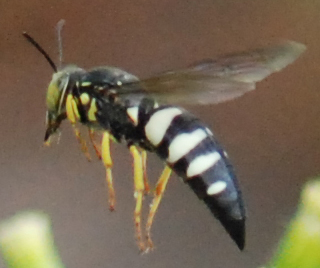 Seriously.  This species of wasp finds enough true bugs in the general area of my yard to raise its entire brood of young for the year on the bugs that it finds and paralyzes, drags back to its nest, and lays eggs on.  Isn't that incredible?  Talk about natural pest control.  Talk about the "balance of nature".

To top it all off, as an adult, this wasp acts as a pollinator on flowers in my garden.  Before I started learning about the specific identities of the insects in my garden, I had no idea that wasps were such extraordinary predators or that adult wasps generally just ate pollen and nectar.  Based on a childhood experience, I was actually quite scared of them.  Now wasps fascinate me, and the more I learn, the more fascinated I become.

I am continually stunned by the complex interactions occurring all around me - interactions that I simply don't see or even know to look for.  The natural world is truly a marvelous, intricate web of life whose structure we would be wise to cherish, rather than destroy.
Posted by Gaia Gardener: at 10:34 PM

Excellent job! You've inspired me to take a closer look at similar wasps which are all over my sea holly. We don't have many stink bugs here, so maybe it's a relative.

Maybe you don't see many stink bugs because you have all these wasps! LOL!

Have fun exploring the wasps you're seeing. It's been a real eye opener for me to see how each different species of wasp seems to target a different segment of the insect or spider world to prey upon. I don't know what I thought wasps ate - but I sure never thought of them being predators!