Just outside our kitchen window are the lower branches of a pignut hickory tree.  The leaves are typical for hickory in June - bright green, compound, and in pretty good condition, but nothing showy or unusual.  Often, when I look out the window, I see a wasp or two flying in and out of the leaves, seeming to inspect them top and bottom.

A few years ago I would have freaked out a bit.  Where was the wasp nest?  Would I get stung as I was changing out the hummingbird feeder water or emptying and refilling the small birdbath just below these branches?  What is that wasp DOING out there?!

Now I relax...and quietly thank each wasp I see.  Why this change in my attitude? 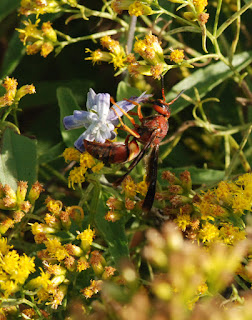 Meanwhile, most adult wasps feed on nectar and/or pollen.  You can often see them feeding on flowers, as in my photo from Kansas, taken in October, 2014.

Meanwhile, the female wasps patrol our yards and gardens all day long, hunting for the caterpillars or even grasshoppers munching on our plants.

Will I happily allow a paper wasp nest to be built right outside a commonly used doorway?  No.  However, I do allow mud daubers to build there, since they are solitary wasps and not aggressive.  Now, too, I allow paper wasp nests to be built in out-of-the-way places, although I do note carefully where they are, so I can steer clear of them.

It never ceases to amaze me how well "nature" works when we get out of its way.  It's never as scary as it seems before we take the time to realize what's actually going on.

I agree with you! I am not seeing as many wasps or other insects as usual. I think between our bad storms and heat, it's been hard on them.