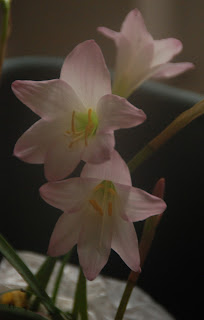 About a week before the house down the street from us was due to be torn down, due to terminal decrepitude, I noticed several pink trumpets peeking out from under the base of a large popcorn tree seedling in the badly overgrown yard.  On the day that demolition began, and despite a neighbor assuring me that "they won't care", I finally called the company name on the sign out front and asked for permission to dig these plants.  I was pretty sure they were pink rain lilies.

The male voice on the other end of the phone authoritatively told me that I was welcome to have any plants that I wanted to dig, anywhere in the yard.  I gave him my name, to be sure that he knew who I was, and decided to come back that evening after the demolition had stopped for the day.

That evening Greg and I drove down and parked in front of the now-cordoned-off yard.  A middle-aged man and his 10 year old son were on the sidewalk, examining the now partially demolished house.  When Greg and I ducked under the tape and started to dig, they decided it was okay if they ducked under the tape, too, and they proceeded to walk all around the partially wrecked house, looking at it closely.

As I started digging, I noticed there were more rain lilies than I had estimated, but I saw no reason to leave any of them to be scraped away and hauled to the landfill.  While I dug and Greg held the popcorn tree sapling back for me, the man and his son started asking questions and continued to poke around.  I warned them that I had called to get permission to rescue the plants, but there was no change in the man's behavior.  It was dusk, so I couldn't afford to wait any longer and I kept digging.

It wasn't long before another car drove up and a man rather heatedly got out and came towards us, asking what we were doing.  I explained that I was rescuing the rain lilies, with permission and with my husband's help.  The other man just started asking questions about why the house was being demolished.

It turned out that the house had been purchased by a pair of brothers, one of whom had given me verbal permission over the phone and the other of whom was confronting us.  My only mistake was in not asking for the name of the man I was talking with on the phone that morning.

Before long, 2 other neighbors had joined us, including one who knew both me and the owner of the house.  We all just stood and talked for a while before I left the group and went over to finish my rescue operation before it got dark.  When I was done, I had 7 plastic grocery bags with healthy clumps of rain lilies in them.  I had also seen a few rattlesnake weed tubers fall out of the sandy soil as I dug, so I knew I was "rescuing" rattlesnake weed*, too.

Once I had the bags of rain lilies in the car and had put away my shovel, all without walking through the remains of the house or hurting myself, the owner visibly seemed to relax.  He told me that he'd been afraid someone was trying to salvage copper pipe from the house and that we'd get hurt in the wreckage.  When I asked if I could check out the back yard, too, to see if there were any plants worth salvaging, he readily gave his permission, with the caveat that I wait until demolition was complete.

Despite my good intentions, I haven't explored that back yard yet.  Frankly, it took quite a while just to get all of the pink rain lilies that I rescued safely tucked in.

Because of the rattlesnake weed issue, I decided that I needed to remove all of the "native soil" and plant just the bare bulbs, even though this isn't a good time of year to transplant rain lilies.  I put 4 groups of 7-10 bulbs of varying sizes around the yard - and I still had 6 plastic bags of rain lilies left.

At that point, I decided that I needed to approach this differently, so I set up a potting assembly area and started taking the bulbs out of the "contaminated" soil and planting them into nursery pots.  When I finally got to the last plastic bag, I opened it to find blooms trying desperately to reach the open air. 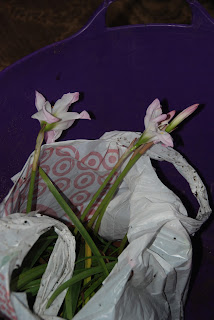 That clump of bulbs went directly into a big pot, rattlesnake weed be damned (for now). 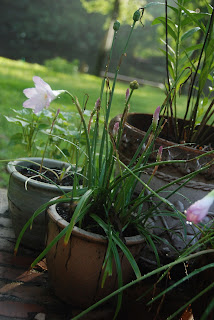 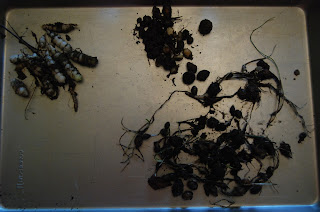 For most of the time, as I pulled the rain lily bulbs out, I hand-sifted the soil, looking for small bulblets and rattlesnake weed tubers, which I carefully sorted out.  The rattlesnake weed tubers are in the upper left corner of the cookie sheet;  you can see how the plant gets its name.  The other piles are every other lump I came across, most of them small rain lily bulbs.  Sometimes it was hard to distinguish which was which, so I separated them all. then lumped like bulbets together and planted the questionable little bulbs in a separate pot, allowing me to monitor them more carefully. 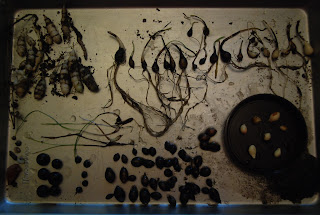 I lost count of all the rain lily bulbs I ended up with. 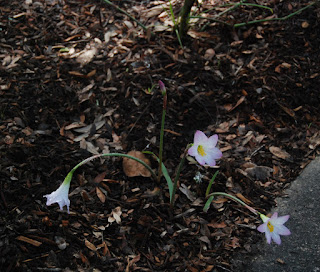 I now have the 4 clumps of rain lilies in the ground, plus 2 pots of bulbs that I simply filled with unsifted clumps that were sending up bloom spikes again, including the clump above.  That pair of pots probably has some rattlesnake weed in them, so I'm planning on emptying them during the winter and replanting just the rain lily bulbs.  I don't currently have rattlesnake weed in the yard, and I'd prefer to keep it that way if I can. 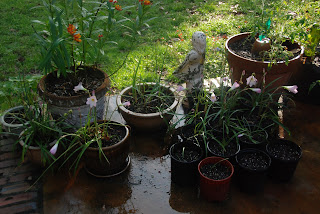 Besides those 6 groups, I ended up with one large clay dish and 14 one-gallon nursery pots filled with 5+ rain lily bulbs each, plus 2 pots chock full of bulbets and 1 pot of probable bulbets.

I also found several centipedes, a couple slugs, a piece of old brick, and half a dozen old "mummified" acorns while I was sifting.  The living animals were released into the garden.

Some of the rain lilies put on a flush of blooms while I was planting them.  Now there are quite a few new bloom spikes coming up again, a week later. 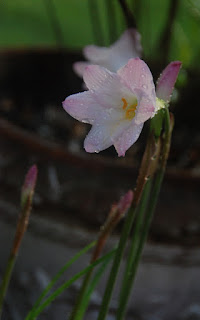 As the blooms have come and gone, I've been able to give my plants a more definitive identification:  Rosepink Zephyrlily, Zephyranthes grandiflora, according to the USDA Plant Database.  Most of the time, this species is simply called pink rain lilies.  I was correct in my original, tentative identification.  The USDA Plants Profile shows them as spottily native to the Southeast, although not listed as native to Okaloosa County, FL.  Some sources believe this species is more truly native to Mexico, Central America, and Colombia.

These little beauties are not hardy where the soil freezes, but I have seen them treated as a potted plant and either kept indoors year round or put outside in the summer and brought into a basement or semi-heated garage for the winter.

When all's said and done, I'm super happy with the results of my plant rescue - despite the few dicey moments when we were actually out digging.  My take home from that is, in the future, to be sure to get the name of anyone I receive permission from!

__________________
*Rattlesnake weed is also known as Florida betony.  Although it is a native plant, it is considered an extremely obnoxious lawn weed and is very difficult to eradicate.
Posted by Gaia Gardener: at 7:25 PM

...and so begins the filling of the new garden :)
Nice job, I didn't know they were native, that makes the rescue even better, and the story that goes with them will now be something you can tell when you pass them on further!

What a story to go with your plant rescue!! Those are lovely. I'm glad you saved them. Very thorough on getting rid of the weeds. Wow!