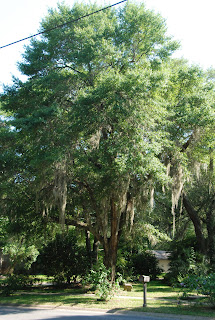 Softening the branches on many of the trees in our neighborhood, Spanish moss drapes lazily down, creating a mood redolent of heat, humidity and southern tranquility.  I love it.  The streamers of Spanish moss were one of the features I fell in love with when I first drove down this street.

So I was rather shocked when one of our neighbors started talking about how he needed to find someone to take the moss out of his trees, because it was killing them.  I knew from my time in Mobile, Alabama, that Spanish moss is an epiphyte, a plant without roots that does NOT take nutrients from the plant that it is living on.  Epiphytes get all their water and nutrients directly from the air, rain and dust.  They are NOT parasitic, as mistletoe is, despite their similar location in the canopies of trees.

How could anyone not like this beautiful, graceful, gray-green plant that waves so softly in the slightest breeze? 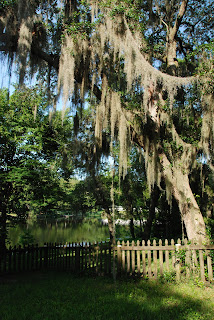 It turns out that there are several serious, fairly widespread misconceptions about Spanish moss.  One of the saddest and most damaging of these misconceptions is that it will harm your trees.  The truth is that Spanish moss will often colonize trees that are already beginning to decline, growing more rapidly than on nearby, healthier trees due to the increased light that occurs in the thinning canopies of the trees that are already dying.  This has made it all too easy to blame the trees' decline on the Spanish moss. 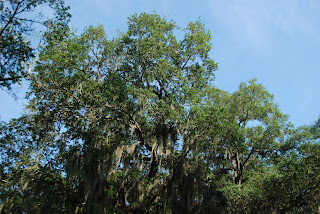 The only "damage" that Spanish moss will actually do to a healthy tree is to partially shade the leaves of the lower branches and, if it's heavily festooning a tree, increase the wind resistance should the tree be in an area unlucky enough to be hit by a hurricane.  The photo above is the canopy of the same tree in the previous photo. The tree is healthy and actively growing, despite having a large amount of Spanish moss growing on it.

Even the concern that large collections of Spanish moss can "weigh down" a branch and cause it to fall appear to be mistaken - Spanish moss is very lightweight and branches that have fallen are almost always found to have other structural weaknesses that brought them down.

So what is this odd plant?  Is it, indeed, even a plant? 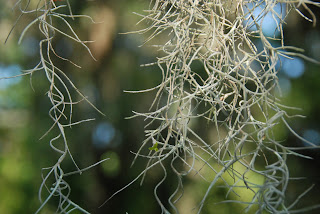 Yes, indeed, Spanish moss IS a plant.  Going by the scientific name of Tillandsia usneoides, Spanish moss is actually a flowering plant in the pineapple family!  It is NOT a moss and it is NOT Spanish.  Apparently, if you look really closely during the summer months, you can see small blooms that are variously reported to be green, bluish, or yellow.  Not having looked for said blossoms, I hadn't noticed them before...but I looked for them today and I found them.   Do you see the bloom in the photo above?  Here is a closeup of it.... 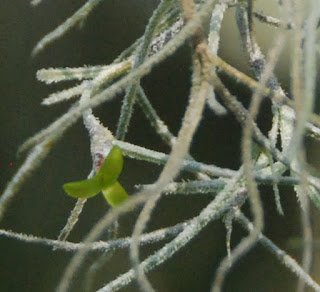 They are apparently even mildly fragrant.  Here is another flower, more of a true yellow in color. 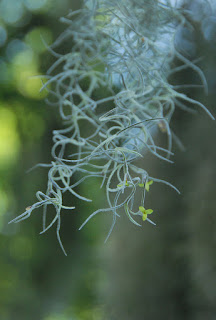 Although one of the primary structures of Spanish moss is its long stem, which can reach 20 feet or more in length, there is no functional xylem or phloem in the plant.  Each cell either gathers its nutrients and moisture directly from the air and photosynthesizes energy itself or it gets its resources from a neighboring cell.  There are small, very narrow leaves.  Both the stems and leaves are covered with overlapping gray scales that are important in capturing the airborne water and nutrients that sustain this plant.

Not surprisingly since it's native to this area, Spanish moss is actually an important plant for wildlife.  Several birds use it extensively for nesting material, including the Baltimore Oriole.  The Northern Parula (warbler) is said to nest where Spanish moss and other similar lichens occur, building its nest inside the hanging festoons.  There is even a spider that lives only in Spanish moss; many other animals use it for shelter or as foraging grounds.

Looking straight up into the middle of hanging Spanish moss, you can see how nests could be hidden in the larger clumps. 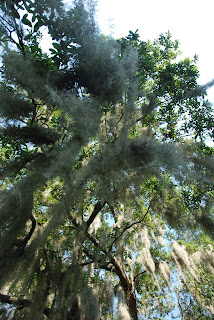 Even today, Spanish moss is used frequently in floral arrangements and for craft projects.  It is said to make an excellent mulch for plant beds, which I intend to try out.  It is common here to see piles of Spanish moss put out for the city waste trucks to pick up;  why not scavenge some of it, keeping it from the landfill in the process?  It's free, it's a beautiful gray-green color, and it's organic.  What's not to like?

As I did research for this post, I saw one final use mentioned for Spanish moss:  apparently in some locales it is draped from fences or wires as a privacy screen between neighbors!  I haven't seen that on Pinterest yet, but I'll bet some artful soul could really make an interesting backyard feature using the general concept.

Speaking of Spanish moss and landscape features, Mobile, Alabama, apparently used to be known for the gracious live oaks, heavily festooned with Spanish moss, that lined many of its streets.  When we lived there, we were told that the Spanish moss was declining, though, due to air pollution.  Certainly there is not much Spanish moss left in Mobile.  What little I've seen there tends to be on the back streets, which fits well with the idea that air pollution decreases its viability.

Of course, when I think about it, Spanish moss IS an epiphyte - a plant that gets all its nutrients and water from the air, rain and dust.  Is it so surprising, then, that poor air quality would decrease its health and therefore its ability to survive and reproduce?

How does Spanish moss actually reproduce?  It seems atmospheric, not reproductively vibrant.  However, as mentioned above, it's a flowering plant.  Thus, it produces (tiny) seeds that can and do produce new plants.  More frequently, though, Spanish moss probably spreads by wind or by animals such as birds, which carry small pieces of the plant from tree to tree as they move around. 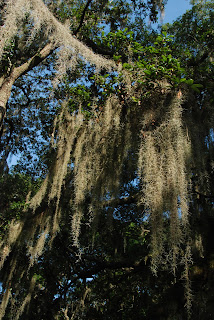 Spreading across the landscape as if by magic, creating a mystical feeling by its very presence, Spanish moss is a special plant that creates a unique sense of place as it grows.  I'm excited to be able to encourage it here in our own personal landscape.
Posted by Gaia Gardener: at 7:29 PM

Now I know so much more about Spanish moss. So interesting. I hope your neighbor gets this info too. I am surprised at how some old myths hang around when it is so easy to get real facts these days. Looking forward to photos of it at your place.

Thanks for stopping by, GonSS. I'm working in Linux right now and have to change over to Windows to add the photos, so I'll be trying to do that in the next 24 hours or so. I DO have some photos to go along with this post.