Ashamedly, I have to admit that it took me living here for over 10 months to get off my duff and go back out to the nearby wild area for a walk-about to look for native plants.  Even then, my friend Anna had to initiate the outing.  I can't believe I waited this long - and I'm kicking myself about all the interesting sights I have been missing.

On Monday morning, Anna and I sallied forth to the same road/trail that my family and I visited 18 months ago.  I blogged about our finds in "We're Not in Kansas Any More!" as well as two subsequent posts about specific plants.  Walking on Monday, I actually recognized the American holly tree that I talked about in that original post, but otherwise my attention was generally drawn to very different plants this time.

We were scouting for lupine, which Anna had seen along this sand road just a week or two earlier.  Unfortunately, in the intervening time, some "maintenance" had been done on the trail by a bulldozer, carelessly and messily widening it, and we found no trace of the lupine.  We did, however, discover some other treasures.

One of the first plants we noticed was Pinewoods Milkweed, Asclepias humistrata. 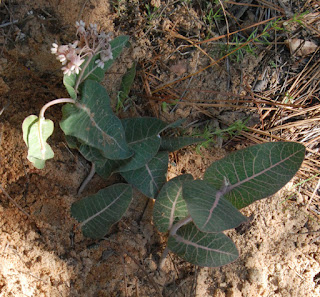 This plant is also known by the common names of sandhill milkweed, for its preferred habitat, and pink-veined milkweed or purple milkweed for rather obvious reasons.  This is a plant that I would love to grow in my yard, as I find the leaves gorgeous just by themselves. 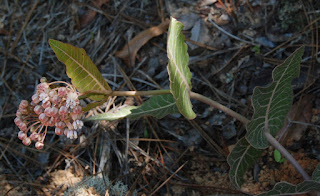 Add in the attractive pinkish flowers and its function as food for monarch caterpillars and this plant becomes almost irresistible.

Another attractive plant that we noticed was this little white-flowered beauty with its beautifully shaped, dark green leaves. 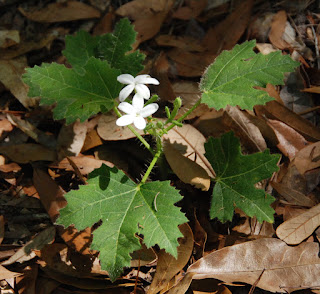 As I researched to figure out what we were seeing, I was very glad that we didn't try to pick any of the flowers we saw, just to save us from picking this one.  This plant is called Tread-Softly, Cnidoscolus stimulosus, and all of the green, above-ground parts of the plant are covered with stinging hairs.  While this isn't not a true nettle, it is sometimes called bull nettle or spurge nettle.  Another name for it is finger rot, which makes my imagination run wild in all sorts of nasty ways.  Needless to say, this is NOT a plant that I plan on trying to import into our yard!   Ironically, at least one source said that the tuberous roots are edible...but getting to those roots might take some serious caution.

Silphium is a genus that I became somewhat familiar with on the prairie, where one of its most famous members is Compass Plant, Silphium laciniatum.  As soon as I saw the leaves of this basal rosette, my mind yelled, "Silphium!", and I think that instinctive reaction is probably correct. 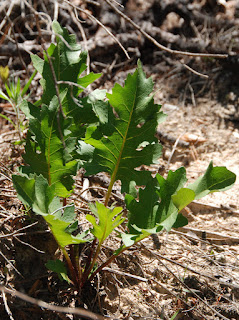 While I won't know for sure until later in the year when I see it bloom, I think this beautiful little clump of big, bright green leaves belongs to Kidneyleaf Rosinweed, Silphium compositum.   I'm not sure you could dream up a much uglier name for a plant.  Despite its ugly name, I hope to find a source for this species, since I think the leaves would look really nice in a native flower bed, adding some dramatic size and visual texture to the overall mix.

There were two flowers that we found that I haven't been able to identify yet.  First was this pinky-purple little beauty. 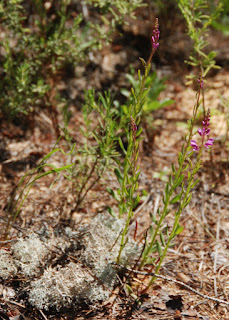 That's reindeer moss nestled beside it, to give you a sense of scale.  We saw several of these plants blooming and they were all less than 12" tall.

Second was this yellow-green, almost abstract bloomer that I suspect is in the Euphorbiaceae family. We saw several;  they seemed to run about 15-18" tall. 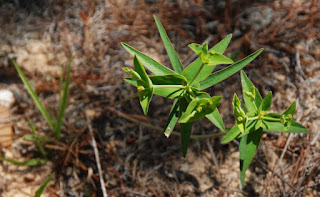 If anyone knows the identity of either of these plants, I would love to know what they are.

Another plant we noticed was this silvery, quiet-looking plant. 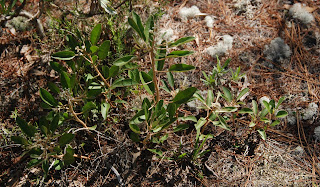 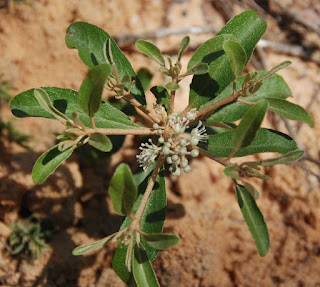 What I haven't been able to determine is why it's been given the common name of Healing Croton.  It is the larval food for a pretty little butterfly known as a goatweed leafwing.   I haven't seen a goatweed leafwing since moving here to Florida, although they do occur here, but here are photos of one in Kansas, taken in September 2013. 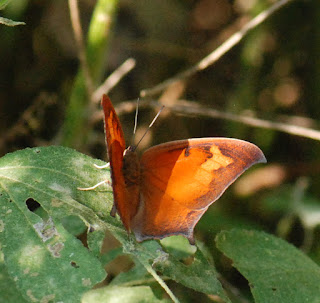 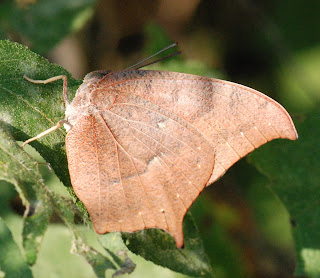 Speaking of butterflies, at one point we found this large chrysalis hanging from a bare branch.  I don't know enough about such things to begin to guess what species made this chrysalis, but I think it's cool. 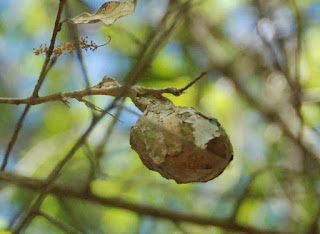 Another insect sighting was this black and white wasp, working busily to deal with a caterpillar, presumably extracted from this stitched together clump of leaves. 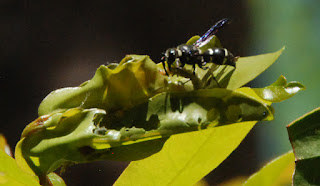 At the time, I was concerned that it might be a bald-faced hornet, so I didn't get too close. 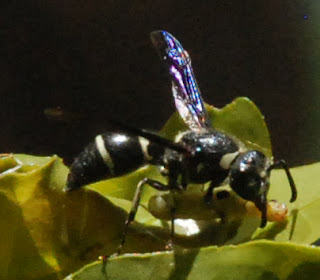 When I got home and downloaded the photos, I realized that this little beauty is actually a potter or mason wasp, a solitary wasp, presumably collecting caterpillars to paralyze and store for its young to eat as it grows.

Reindeer moss, sparkleberry, blooming yaupon, black cherry, beach rosemary.....  We saw a lot of other things that entranced us.  I'll leave you with a photo of the sky through the pine trees - a slice of heaven. 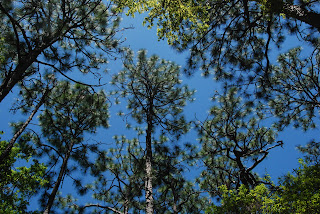 I would think that you can break a stem off of the milkweed and plant it in your yard. I have a different kind of milkweed in my yard and I've taken a few cuttings from it. Thanks for sharing all the pictures!

Cody, I've never heard of that being possible with milkweeds, but I'd certainly be willing to give it a try! What kind of milkweed have you used that propagation method on? Glad you enjoyed the pictures! Cynthia

Beautiful plants. Love that little butterfly, goatweed leafwing. Kind of an obvious name though. Thanks for taking us along on your plant tour.

GonSS, Thanks for "traveling" with me! Cynthia